Readers and writers acknowledge that any fictitious narrative takes time to finish, whether that means reading or writing END_OF_DOCUMENT_TOKEN_TO_BE_REPLACED

Science fiction and fantasy-focused literature often fall under the “despised, marginal” genre that most readers and writers neglect. END_OF_DOCUMENT_TOKEN_TO_BE_REPLACED

Many famous writers get recognized at some point in their careers. As for Emily Dickinson, one of American END_OF_DOCUMENT_TOKEN_TO_BE_REPLACED

In-Depth Explanation On How To Cite A Play MLA 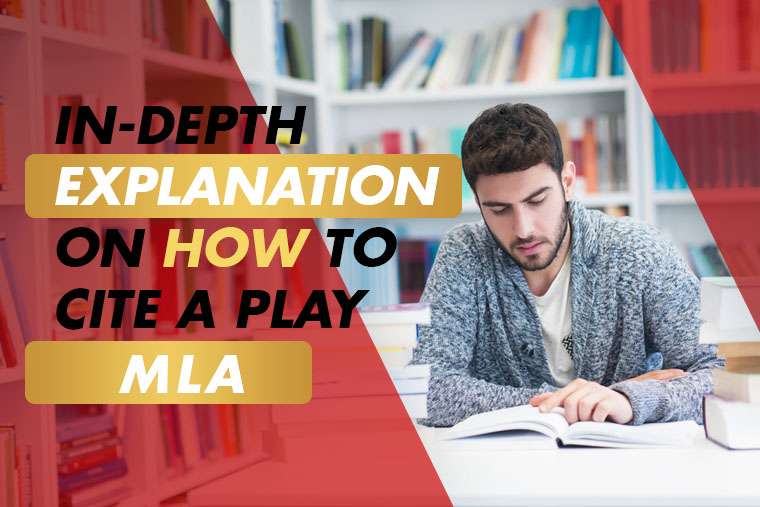 Before you write about any literary work like poetry or play, you have to quote your source. And the easy way to do so is to use citations. Such citations have various styles like MLA, APA, and Chicago styles.

You have to master the citation style that’s recommended for your work. That’ll help you to create a masterpiece.

This post explains in detail how you can cite a play using MLA style. So, read through to get a thorough understanding.

How To Cite A Play In MLA

MLA is short for Modern Language Association. It has recommendations for both in-text citations and works cited entries of a play.

It involves writing a few details of a source within a text or work. It consists of the writer’s surname and the page number. An example is (Brown 46).

But if the play has details like scenes, acts, and line numbers, then insert them. Write the act, scene, and then the line numbers after the writer’s surname. Use periods to separate them. An example is (Brown 2.5.92 – 95).

To cite multiple plays by one author, use the play title instead of the playwright’s name and write it in italics. Write the full play title the first time you use it in your text. Subsequently, abbreviate the play title. It’ll help to avoid repetitions.

Furthermore, the length of the quote determines your in-text citation. When it’s three lines or less, you should use quotation marks to show the quote. Use double quotation to specify the character’s speech.

George, the narrator of the story, has an issue with trust:” ‘I can’t leave my confidential notes with any of my friends,’ I confessed sadly. “Can’t I hide it in a safe with my password?'” (Brown 55)

If your quote has more than three lines or contains more than one character, write it in block quotes. Don’t use quotation marks to show the quotes.

It’s used to list all the sources cited in your work. It gives more details than in-text citations. Works cited entries for a play vary depending on if it’s a performance, a book, or part of an anthology (a book containing a collection of several plays).

When the play is a published book, write the playwright’s name, starting with the last name, a comma, and the first name. Next, add the play title in italics, the publisher, and the year of publication. For example,

If it’s a part of an anthology, write it like the published book, but add the anthology details after the book title. The details include the title (in italics) and the editor’s name (first name, last name). Then add the page number after the year of publication. For instance,

Omit the editor, if there is no named one, and write the publishers after the anthology title.

If there are two playwrights, write their names in the same order with the book’s title page. Start with the first author’s surname, then the first name, before adding the second writer’s first name and last name. For instance, (Brown, James and Lois Clark)

If there are three or more playwrights, write only the first author’s name and “et al.” For instance, (Brown, James, et al.)

How To Quote And Cite Dialogue From A Play In MLA

Quotes from one speaker:

If you want to quote from one speaker, first write the author’s name before the play title. Then you can write the character’s dialogue to introduce the play. Next, write the name of the quote’s speaker.

Use a present tense verb (like states, says, notes, etc.) to introduce the quote. And write it within quotation marks. It’ll help your readers recognize that it’s a quote. For example,

In Daniel Bryan’s Tales of the Sea, the character William says, “There’s nowhere I’d rather be than the sea.”

Furthermore, if the play you want to quote is in verses, use slashes to denote the line breaks. Add spaces before and after the slash. For example, you can write: Annie notes, “the sky is so blue and pretty / But all I can do is to stare.”

In a case where you omit any word or phrase in the quote, use ellipses to represent the omission. For example, Daniel writes, “He waited until summer…, and fulfilled his dream.”

When you want to make the quotation clear, add the explanation or comment in a square bracket within the quote. For instance, Daniel writes, “Happily, he [Henry] gave them the documents and left.”

Quotes from two or more speakers:

To quote a dialogue from two or more speakers, add a one-line gap between the first line of text and the next ones. It’s essential because you won’t use quotation marks when quoting the dialogue from more than one speaker.

So, the line gap will show the readers what you’re quoting.

Leave half an inch indention on the left margin before you write the names of the speakers. Their names should be in capital letters. Next, add another half-inch indention if the dialogue runs over to subsequent lines.

If the dialogue contains stage directions, add them to the quote. Also, use parentheses to represent them. And add the exact punctuations that are used in the play. For example,

Daniel Bryan explains the captain’s love for the sea:

HENRY. (Holding up his hat) Where would I rather be than the sea?

It holds all freshness and life.

LISA. I can see now that I can’t change your mind about leaving.

To create in-text citations in prose plays, add the author’s last name. Then, add the play’s title in italics. If you’ve written the title before within your text, there’s no need to write it again. Next, add the page number after the title and then the act number.

You have to use the in-text citation for verse plays. Just like in prose plays, add them in parentheses after the quotation. Within the parentheses, write the act number and let the scene number follow.

Some verse plays are divided into line numbers, so add the line number of the quotation in your citation.

How To Cite The Script And Performance Of A Play

You have to cite the script and performance of a play differently.

For a published script, write the author’s name first (begin with the surname, a comma, and the first name). Next, write the title of the play in italics. Finally, write the name of the publishers and the year of publishing.

For instance: Brown, James. A Day in June. Bosworth Publishing, 2017.

The citation for an unpublished script is similar to a published one, but the title is written in quotation marks. You can use the optional element slot to show additional information about the work at the end. For instance:

For a performance of a play, you have to begin with the title. Next, write the names of the contributors, such as author, director, and performers. Then, include the production company, date, and location of the performance. For example:

If the play is on more than one date, then they are different versions of the work. So, cite it differently from the first entry. For instance:

Distinguish the script and performance when you refer to them in your text. For example, you can write:

In the first scene of “A Day in June,” Brown has Josh Annie sing to her grandma (3). In the Haven production, Diane Goodman sings the song in a sonorous voice.

When writing in-text citations, use the author’s last name to cite the script. And use the performance name for the performance. It has to go with the works-cited list.

Now that you understand how to cite a play in MLA ensure you pay attention to details while implementing it. Use the proper recommendations for your in-text and works cited entries.

In essence, watch out for the specific requirements for plays with one or multiple authors. And the ones that are books, part of anthologies, or performances. It’ll help you create a masterpiece.