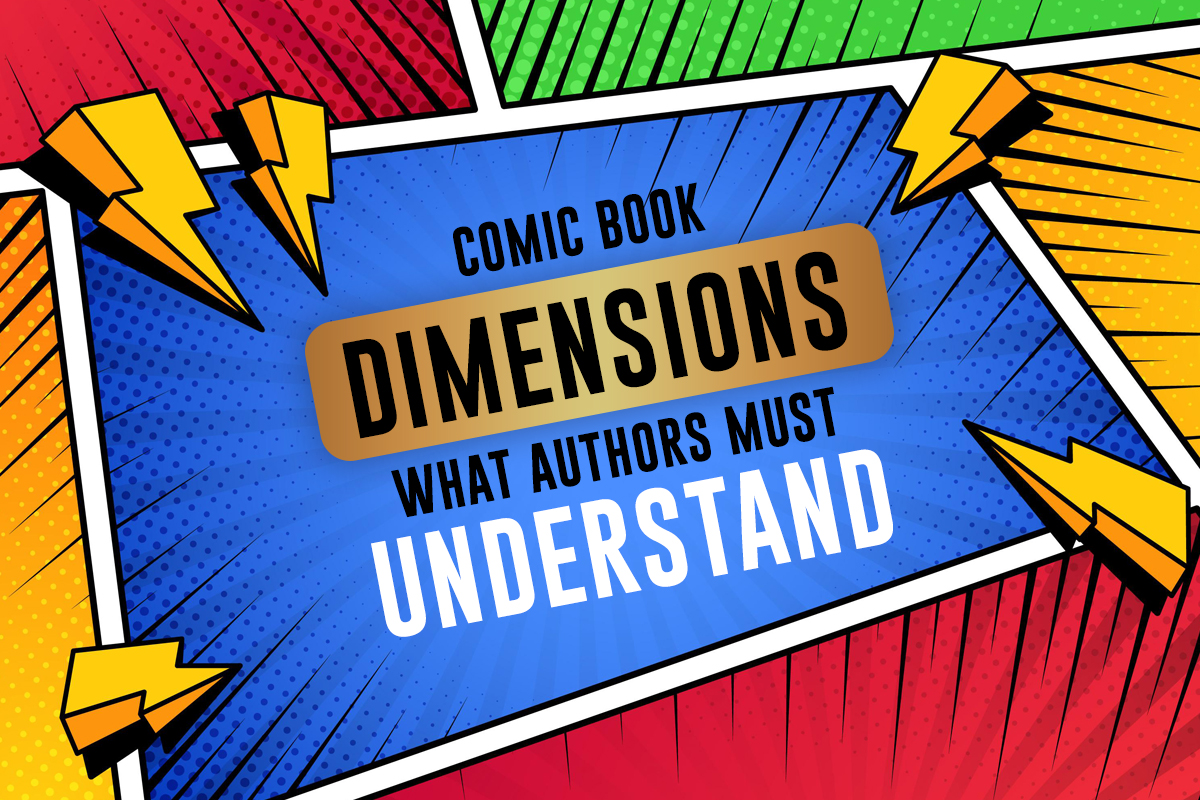 Nowadays, there’re lots of options for printing comics. It’s likely because there’s a large audience for the genre. Also, picking the right dimension, format and binding can determine the success of your comic book.

Comic books are storytelling forms that use visuals and images to show characters and various dialogues. Most times, authors collaborate with artists to produce images after they create the story. Different elements act together to make comic books unique and appealing compared to other story forms.

In this article, you’ll get in-depth information on the various dimensions of comic books, the genres, and the characteristics that make them comic books. Keep reading!

The different genres of comics have standard dimensions or sizes that publishers maintain during the printing stages. At times, the dimensions depend on the period of the comics than the genre. Let’s discuss the various standards:

Since the golden age of comic books, a lot has improved. The changes are seen in both how the paper looks and feels. The modern comic book standard makes use of advanced printing. So, it adds a variety of colors and saturation to the comics. Also, it adds a glossy finish to improve the color and preserve the quality for a long time.

If you want to use the modern standards for your comic book, you’ll use the standard specification. It includes a dimension of 6.6 inches x 10.3 inches and a saddle-stitched (also known as staple bound) binding. It also consists of a thickness of 85lb (pounds) for the cover paper and 55lb to 70lb for the inside paper (gloss coated inner paper). Ensure you use gloss varnish for the cover finish.

This is quite a new practice that usually comprises story collections reprinted in a new format. But keep in mind that this dimension evolves now and then. When you want to change your comic book to this format, it has to match the original size. However, you can reprint the entire book to a smaller edition.

Also, you can choose how you want to customize it. The specification for paperback includes hardcover (casebound) or softcover (perfect bound) for the binding options. Additionally, the dimension is 6.6 inches x 10.3 inches. The cover paper is usually hardcover, and the inner ones have a thickness of 70lb with gloss text. You can use either gloss or matte lamination for the cover finish.

The dimensions of the golden age (1938 to 1956) and silver age (1956 – 1970) comic books vary between publishers. They were disposable comic book formats, and publishers weren’t preserving them. So, ordinary newsprints were used to print them. But now, they have improved massively.

More recently, you can print on thin uncoated paper stock. It helps to give your comic book a vintage feel, with a strong structure that can last for a longer time.

However, if you want to print a manga comic book, you have to arrange the pages carefully. Arrange it such that the first page when reading is the last page of your PDF. It is usually perfect bound. The cover paper is also 10pt gloss or matte. And the inner ones have uncoated text with a thickness of 70lb.

They’re usually for online consumption. But you can also print physical copies. They don’t have a specific dimension. The size depends on the webcomic, including what suits it best.

Furthermore, it uses a hardcover or softcover. It also has no standard cover paper but uses gloss or matte lamination for its finish. The inside ones use any coating with a thickness of 70lb or 80lb.

Characteristics Of A Comic Book

Cartooning: It’s what defines a comic book. It consists of cartoon images that show actions. It also includes abstract lines that portray motion or environmental elements like the wind.

Panel: This refers to the space that contains each scene. And it comes in various shapes like rectangular, circular, and even rhomboid shapes. But rectangles and squares are more popular. Each page of a comic book can contain about six to nine panels. They can have similar sizes or vary depending on the content. Also, they serve as frames that arrange the story.

Caption: It gives information about the scene. It’s usually in rectangular-shaped boxes. Sometimes, they’re not within the panel.

Furthermore, the arrangement of the bubbles is in the order of the dialogue between the characters. So, it shows the order of reading the conversation. Therefore, the position of the speech bubble is essential. They also come together to signify a flow in the conversation. Sometimes, the speech is usually without a bubble, and so a line connects the text to the character.

The tail of the speech bubbles also shows which character is talking. At times, it may point outside the panel when the doers not within it. A speech bubble with no tail signifies a general or unknown sound or speech—an example is the sound of an explosion.

Gutter: This refers to space between different panels. It usually indicates that there was a gap in time. However, some panels may not have it between them. So they’re known as “gutterless.”

Thought bubble: This cloudy bubble shows what the character is thinking at a time. It allows the readers to understand what’s in your character’s mind.

Sound effect: It involves the use of onomatopoeia (words that imitate or suggest a sound that they’re describing). It can be in a speech bubble or just within the scene. Also, it can signify a sound from a character or the environment. Furthermore, a change in shape or style usually depicts the volume level of the sound. Examples include bang, zoom, and wham.

Signs or symbols: They express a character’s feelings or emotions without using words. Examples are question marks that can indicate confusion, and a light bulb over the character’s head can indicate an idea. The symbols have no limit but should relate to the actions shown on the panel. They need to be clear for your readers to understand easily.

Encapsulation: It’s a process, which involves capturing special moments in a story. It’s necessary to do this because you can’t show every single moment of your story within the comic book. So, you have to choose the spectacular ones.

Superhero: This is a popular genre of comic books. It consists of heroes who use their superpowers to protect people. It’s also fictional and sparks the imagination of readers. Most times, such heroes are in disguise using masks and capes. It’s full of action and adventure. Such heroes include Spiderman, Wonder woman, Superman, etc.

Alternative or Esoteric: It’s often more realistic than superhero comic books. But they’re usually not authentic. They’re fictional, educational, or historic. Readers are primarily people who enjoy thinking about what they read. An example is “American Splendor.”

Manga: It consists of Japanese comics that translate into English. It’s usually read from right to left like the original version. Also, it’s mostly in series and has several volumes. An example is Naruto.

Science fiction: It comprises of other worlds or universes. It contains fictional events in the future and has an element of advanced technology. An example is Starlord.

Fantasy: It contains mythical characters. It usually involves magic, swords, and creatures that aren’t real. An example is Forbidden Worlds.

Horror: As the name implies, it contains scary characters. It frightens the readers and may include supernatural events or not. It consists of unexpected or unknown events that can create fear. An example is “Tomb of Dracula.”

Action or adventure: The characters don’t possess superpowers. However, they’re about ordinary people that experience conflict. Sometimes, the characters are detectives and criminals. The detective is usually fighting against criminals.

Romance: This comic genre portrays a solid romantic attachment. It usually includes jealousy, divorce, heartbreak, marriage, and betrayal. It started with showing the love life of young adults or teens. An example is Young Love.

Before positioning your comic book for printing, understanding the various dimensions available can smoothing things out. The genre of comic books and their period will determine the sizes or type of materials to use. So, understanding all these will improve your journey as a comic book author.

In the world of notebooks, spiral notebooks never go out of style. Despite the existence of digital notebooks, END_OF_DOCUMENT_TOKEN_TO_BE_REPLACED

As an author or publisher, you’re accustomed to using the power of words to captivate your audience’s interest. END_OF_DOCUMENT_TOKEN_TO_BE_REPLACED

An electronic device that embraces portability and functionality, that’s what defines iPads in our world today. They’re a END_OF_DOCUMENT_TOKEN_TO_BE_REPLACED

If you’re looking for a cost-efficient solution for your print projects, you’d want to try publishing your content END_OF_DOCUMENT_TOKEN_TO_BE_REPLACED