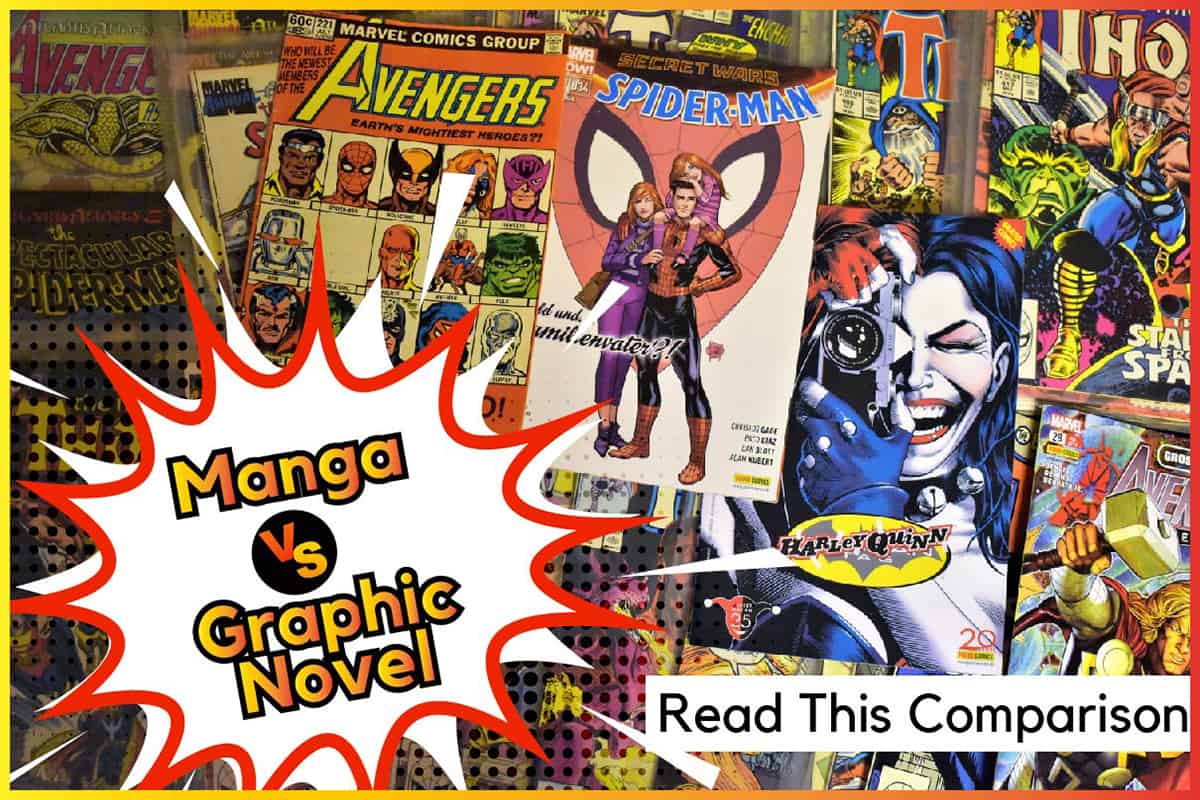 Novels are generally referred to as a long creative fictional write-up written to captivate and entertain a reader. When it comes to telling stories with comics, we use certain terms that may be confusing and difficult to differentiate due to their similarities. It’s the case in manga vs. graphic novel.

Manga and graphic novels are fictional or non-fictional and anthologized pieces of work used for telling stories.

In this post, you’ll learn about their differences. You will also see how they look alike in some other ways. Continue reading.

History Of The Manga

Manga originated from the scrolls, which dates as far back as the 12th century. The first use of the word “manga” was in 1789. However, the popularity and explosion of this artistic work took place in the post-war period. Also, men and boys were the first and earliest readers of manga after World War II. The popular themes then were science fiction, sports, technology, and the supernatural.

In modern times, manga artists can easily produce and upload their work on the internet. Before this time, a mangaka could draw on paper and publish them or submit his works at competitions for them to be seen.

The introduction and increased use of smartphones have made it possible for people to easily read manga on their phones instead of waiting for publication in magazines and the likes. Digital Manga has been growing rapidly while paper ones are gradually declining.

What Are Graphic Novels?

Merriam Webster’s dictionary defined graphic novels as a fictional story presented in comic-strip format and published as a book.’ It is often referred to as a published book of cartoon drawings used to tell stories. It is usually created as a stand-alone story; that is, it is not created as a compilation of stories as seen in some comic books.

Some writers, however, do not agree with the term ‘graphic novel.’ They claim the term is not necessary. To them, the term is used as a marketing tool to sell novels. Others believe that the usage has been corrupted for commercial interest.

They believe the word ‘comic’ is just enough to describe them. However, Neil Gaiman, a writer himself, said that the term’s use compliments the kind of work he writes and not for commercial reasons.

The bottom line is that they are novels because they portray a story with an introduction, a body, and a conclusion. They are novels in pictorial form.

A Brief History Of Graphic Novel

The oldest recognized American graphic novel was published by a Swiss caricaturist named Rodolphe Topffer in 1828. The title of the book is The Adventure of Obadiah Oldbuck. It was published in the English translation for the first time in 1841. Another early graphic novel written by J.A.D and D.F. Read titled journey to the Gold Diggins by Jeremiah Saddlebags.

In 1919, Frans Masereel wrote the Passionate journey, which pioneered graphic novels’ revival in the medieval tradition. In the 1940s, authors wrote several other graphic novels such as Citizen 13660, Anarcho, Dictator of Death by Fawcett comics, It Rhymes with Lust by St. John Publication, etc.

Differences Between Manga And Graphic Novels

Manga vs. graphic novel, in fact. The question is – what’s the difference? Although Manga and Graphic novels are similar in that they both tell stories using art, they are different in many ways.

Manga is of Japanese origin, while Graphic novels originate from American. The term ‘Manga’ in Japanese means’ comics.’

In manga vs. graphic novel, here’s the most obvious difference between the two. The thing is, graphic novels are read from left to right, while manga is read from right to left. This difference is noticed by those familiar with them, but many people still may not easily tell the difference.

Some people prefer to say that the manga reads backward. Manga reads backward because reading from right to left is the traditional way of writing in Japan. Often they are written in Japanese, but for the sake of non-Japanese readers, they are also translated to English and published backward.

The scenes in manga are structured in such a cinematic manner that the character’s action is in sync with the dialogue. It is not necessarily so with Graphic novels. The dialogue and the action of the character may not be in sync at times.

The pacing of the manga is slower than graphic novels. The manga places more emphasis on good and emotional storylines, whereas graphic novels are full of action scenes. It is why they are called ‘action comics at times.’ There seems to be a rush in the story of Graphic novels, but manga requires patience to read through. Most readers of manga believe the patience exercised to read through is worth it.

Graphic novels may dedicate a whole page to action scenes, while manga will dedicate the same page to emotional expressions.

The Manga focuses more on exploring subjects like sex, violence, and the likes but Graphic novels are not that expressive on such subjects. Manga’s freedom to freely explore such a concept as sex is due to the Japanese’s religious affiliations to Buddhism. Buddhism does not believe there is anything shameful about exploring such a subject. However, American Graphic novels are not so expressive of sexuality.

Similarities Between Manga And Graphic Novels

Uses Of Both Manga And Graphic Novels

For teachers as well, using them helps them to cover much within a short period. For example, students can read all stories about Iran’s modern history within two nights using graphic novels.

Similarly, a teacher can teach all about ancient Egyptian civilization within two meetings with his students. It has also been found out that students learn more using these materials for educational purposes than reading big and lengthy novels.

In manga vs. graphic novel, we can say that both are unique and great pieces of artwork. Although they are different in many ways, they are quite similar in many ways. The major difference is hidden in their origin, Manga being Japanese by origin, while Graphic novels are Western (American) by origin.

Anyone can become a successful manga or graphic novel author. It all depends on the person’s creative skills. And if you have a good story to tell, people won’t hesitate to splash the cash on your novel or manga.

What makes a book cover cool? Although there’s no definitive answer to this question, a few factors might END_OF_DOCUMENT_TOKEN_TO_BE_REPLACED

Creating book covers is an essential part of the publishing process, and a lot of thought goes into END_OF_DOCUMENT_TOKEN_TO_BE_REPLACED

Think about it – when browsing through a bookstore or online, what makes you pick up a book? END_OF_DOCUMENT_TOKEN_TO_BE_REPLACED