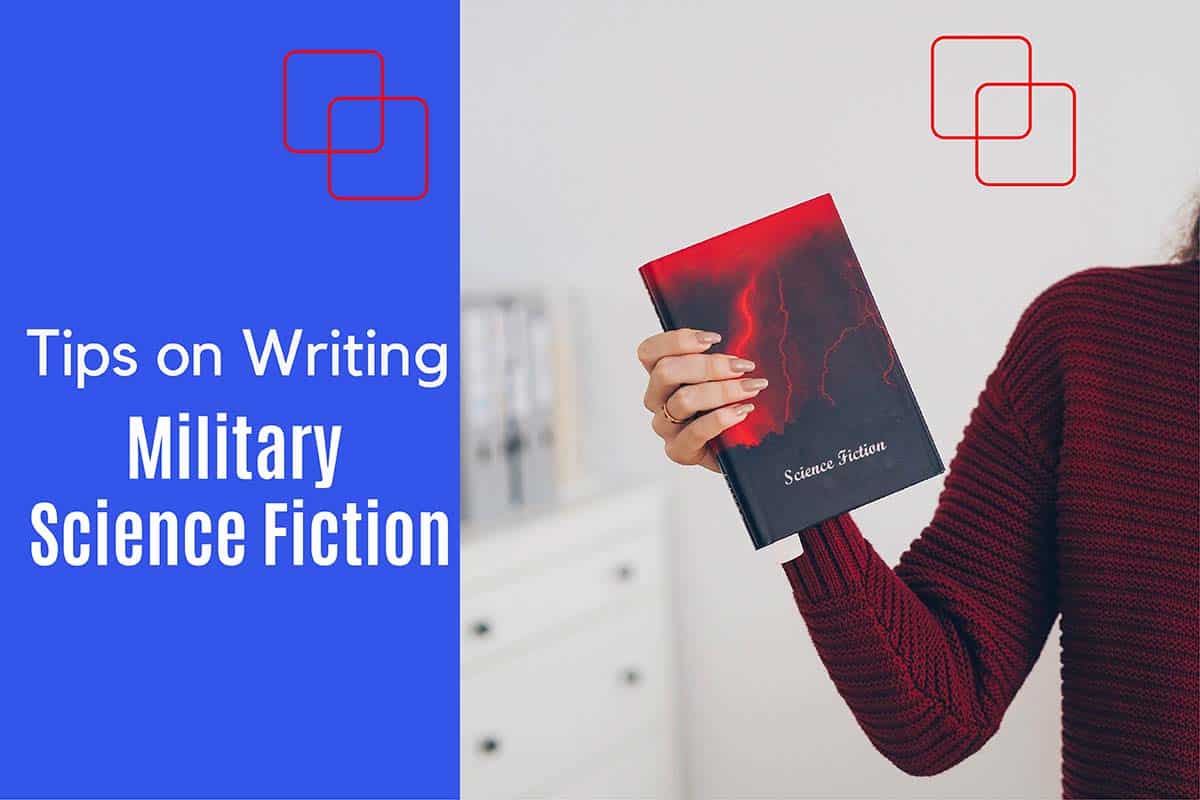 Thinking of writing a military science fiction novel but don’t know where to start? You’ve come to the right place!

In this article, we’re going to discuss the intrinsic features of military science fiction novels, its’ how’s and what’s, and some tips and tricks to get the writing flow done right. Let’s start!

What Is Military Science Fiction?

“It is science-fiction which attempts to portray the military within a science-fiction context realistically. It is not ‘bug shoots.’ It is about human beings and members of other species caught up in warfare and carnage. It isn’t an excuse for simplistic solutions to problems.”

The depth and trauma must be adequately represented at all times. But the genre is not necessarily all warfare. Sometimes, military science fiction is more about the relationship within the unit, or how soldiers perceive their home’s role during the time in which a story is written.

Most of the time, wars start because of justifiable reasons. And in real life, the soldiers who fight are real people with thoughts and feelings.

So when you write your military science fiction novel, make sure to not portray your adversaries as simple creatures who think bad is bad “just because.” We may not believe the same as the other side of the war, but that doesn’t mean they don’t know what they’re fighting for.

If you’re going to write about the military, make sure to get your facts straight. There’s nothing more cringey than reading the misuse of military operations and SOP. Learn how troops hold their firearms properly, how they use hand signals, and how they conserve their ammo.

You don’t have to follow everything through the bone, but it will help you establish a certain amount of authenticity when you at least try and get the basics right.

Real leadership is very seldom apparent. More often than not, it is a subtle, guiding force that transcends resistance and quietly persuades people to do what they need to do.

True leaders do set an example, but that doesn’t automatically mean they pick up a rifle and lead the charge. Sometimes they do, but more often, a leader takes on a different role from their soldiers.

Leadership can empower through mindset, honesty, and will-power. The command allows people to do their jobs well– they don’t do the dirty work.

Just because you’re writing fiction doesn’t mean you just make up rules as you go. You’re writing about something that exists and adheres to strict standards of conduct. You should reflect that in your story as well.

Learn the proper hierarchy of ranks, how they relay communication, how the captains lead their units, etc.

Soldiers, just like anyone else, have lives outside the force. In reality, they’re not the stoic, stone-cold men we usually see in movies.

Keep that in mind when you’re writing about your military characters. Contrary to popular opinion, soldiers aren’t “for God and Country” uber-heroes we also often see.

Sometimes, soldiers act according to their own interests, which can be an exciting twist to your story!

War as a whole is a highly stressful, traumatic experience. Have you ever heard of retired soldiers with PTSD? That’s a typical result of being employed in the force.

War isn’t pretty. It isn’t cool like you see in GI Joe movies or comic books, and every person who has experienced war is always changed or moved.

In subtle but real ways, those experiences change a person. And that sentiment must be present in a military science fiction novel or story.

Military troops are trained hard to be courageous, disciplined, and, most importantly, loyal. In real life, not all soldiers like their teammates, but when the time comes, they all protect each other.

That aspect is crucial once you write your story. Even if it’s science fiction, the military is not military without their ingrained loyalty.

Aside from their loyalty, the military is known for its high level of discipline. Soldiers are like cogs of a machine. If one malfunctions then the whole system collapses. And one of the reasons the system runs smoothly is because of the discipline every soldier shows in their duties.

Try to think of that whenever you feel unmotivated and sluggish when writing your military science fiction novel or story. Living through your characters can be an excellent technique for producing a good book.

Just like how disciplined, and strict military soldiers are with their responsibilities, so should you, as a writer.

Military Science Fiction Writing Mistakes to Watch out For

When it comes to military technology, nobody is as desperately misled as Hollywood. Movies take a lot of poetic licenses, but they are expected to sacrifice precision for the sake of detonations and entertainment.

But it’s not just about technology. If you don’t grasp the fundamentals of medieval weapons and armor, your hero will look stupid when he saves the day by tossing a broadsword like a ninja star.

Another example: what happens after a failed cavalry attack, when a knight in full mail armor falls off his horse? Will he rise quickly to his feet and gather his fellow soldiers?

No. He will lay there doing his best imitation of a turtle until somebody comes by and catches him or sticks a sword through his visor because his armor is just too thick.

Comprehend what a bow, spear, and sword can and couldn’t do. Comprehend how guns work, how rockets work, how bombs work.

This information is readily available online, but writers use films and television as their encyclopedia all too often. All you do is perpetuate what is wrong.

War isn’t one-dimensional. And when writing military science fiction, you’ll probably include war in your plot.

Writers sometimes fail to take into account the many moving parts that make up the military, politics, and war logistics. Take World War II, for example.

Before shots were fired, they were both in the making for many years. Both were also big enough to change the way the world worked ultimately.

It’s not something insignificant that can be solved by only going there, killing the enemy, and claiming victory.

However, we do not mean that you have to go into every little detail. No one wants to read a book about The Rookie Soldier Whose Job is to Keep Track of Ammunition Supplies!

We simply mean that as a writer, you shouldn’t ignore this aspect, and must keep it in mind whenever you’re including war in your military science fiction novel.

There are economic, political, psychological, and social effects that come with it and affect the outcome. Dealing with them with prudence and accuracy helps make your writing more authentic.

There’s such a thing as military language, where shortened military terminologies influence their communication. Although using this form of communication can help bring authenticity to your military science fiction novel, it’s also helpful if you don’t overdo it.

This mistake is common in military fiction. Common examples are:

There’s also a tendency to over-rely on technical terms. There are times when writers get so giddy over a newly-learned word that they repeatedly put it into the text, mainly when characters converse.

Repeatedly calling a character “Private First Class Brian Adams” or a gun “the Demro TAC-1MA Submachine Gun” is going to sound very tacky, Just call the guy PFC, or the gun a gun.

Presidents don’t lead the cavalry or hop in F-16s. It’s also not the Generals’ job to throw grenades and operate the machine guns. If these kinds of things happen in your book, then realistically, everyone should be dead.

However, writers often wrongly associate exciting people with important people. In a modern-day setting, a president of any country is the important person in the story. He cannot be the exciting one.

Generals are also important people that direct their lower subordinates (the sergeants, the privates, the captains) to do the dirty work. They do not make precise targeting computations and save the day with nearly-impossible silver bullet shots.

There are only rare occasions in history when the important people also did the exciting work. In old warrior societies, some of them had their kings lead the front lines of war themselves, but always with ramifications.

Fantasy writers can get away with this more than science fiction writers but do not forget that kings have kingdoms and empires to run too.

Realistically, if you have a king that’s rarely present, that’s going to cause a lot of administration problems. George R. R. Martin handled his absent king very realistically by having his kingdom fall apart.

Another point about enlisted and officers. It’s the younger officers who actually “do” stuff. Officers are managers and leaders.

Their job is to lead their soldiers into combat, but their main job is to not “do.” Younger officers are expected to be competent in a particular skill. The generals are expected to take all their enlisted officers and make their efficiency more significant than the sum of its parts.

To get you more started on military science fiction, Here’s a list of books with unique selections based on the books or films you’ve enjoyed:


Writing fiction is all about finding the balance between fiction and fact. By telling your readers what they think is real, you have to draw the audience into a false sense of security.

People do not seem to neglect this tenet as much when writing about other issues, so why forget about the military?

Establish credibility as an author of the military science fiction genre by following the principles stated above, and then you can have fun. Blow stuff up, create your own world or setting, anything!

In the world of notebooks, spiral notebooks never go out of style. Despite the existence of digital notebooks, END_OF_DOCUMENT_TOKEN_TO_BE_REPLACED

As an author or publisher, you’re accustomed to using the power of words to captivate your audience’s interest. END_OF_DOCUMENT_TOKEN_TO_BE_REPLACED

An electronic device that embraces portability and functionality, that’s what defines iPads in our world today. They’re a END_OF_DOCUMENT_TOKEN_TO_BE_REPLACED

If you’re looking for a cost-efficient solution for your print projects, you’d want to try publishing your content END_OF_DOCUMENT_TOKEN_TO_BE_REPLACED