Readers and writers acknowledge that any fictitious narrative takes time to finish, whether that means reading or writing END_OF_DOCUMENT_TOKEN_TO_BE_REPLACED

Science fiction and fantasy-focused literature often fall under the “despised, marginal” genre that most readers and writers neglect. END_OF_DOCUMENT_TOKEN_TO_BE_REPLACED

Many famous writers get recognized at some point in their careers. As for Emily Dickinson, one of American END_OF_DOCUMENT_TOKEN_TO_BE_REPLACED

Is A Novel Fiction Or Nonfiction? What Writers And Readers Should Know 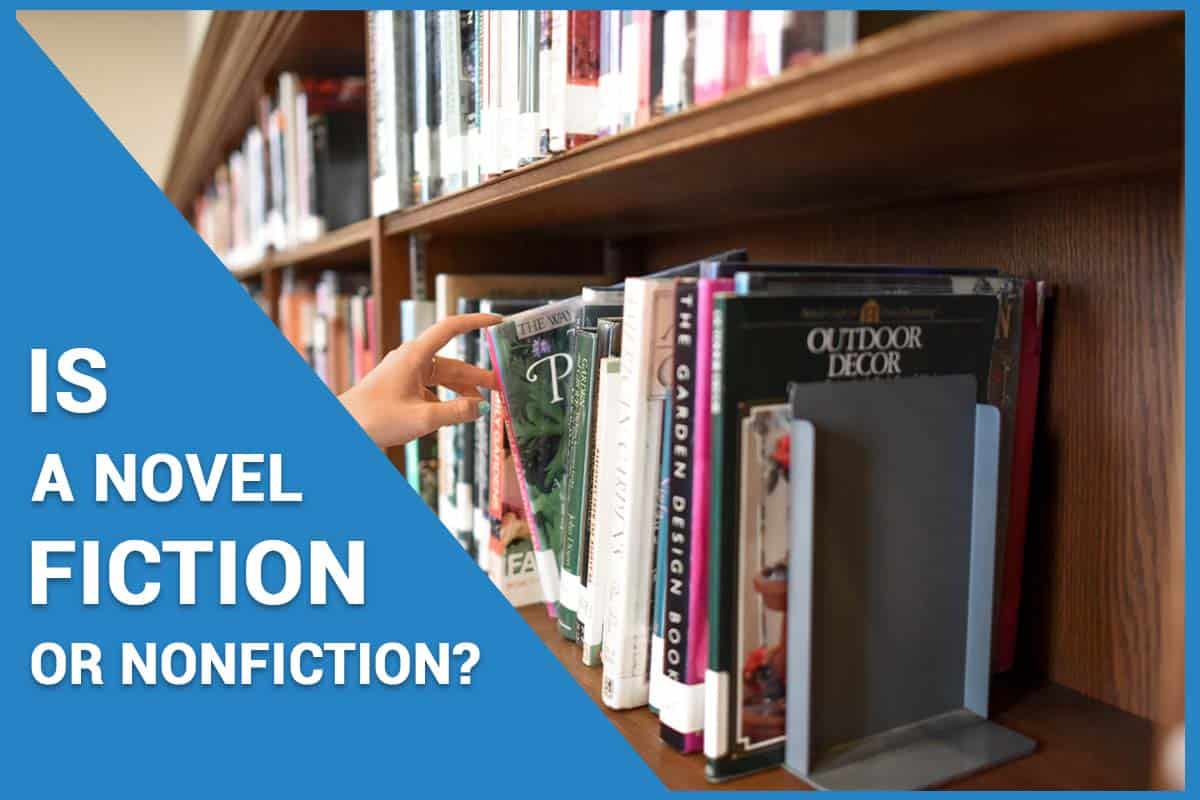 It’s possible that you have read at least one novel in your lifetime. You can hardly find a writer who is not a reader. It might be a hobby for some persons, and as such, they get to read as many novels as their time allows. For others, it might be purpose-driven. It could be part of a syllabus for an examination. So even when you do not like to read ordinarily, which should be strange in a community like this, you might find yourself exposed to a novel in the course of some other literary endeavor. In this regard, have you ever wondered if a novel is a fiction or nonfiction?

The events in novels are usually translated in the form of stories. These stories can cover different topics like romance, marriage, crime, politics, science, school life, family ties, culture, and just about any issue of human existence.

Keep reading for in-depth understanding of this topic!

What Is A Novel?

A Novel is a narrative piece of literature. It is usually long and complex, it deals with human experience, mostly imaginatively. The stories flow through events occurring sequentially. It also consists of several characters in the same setting.

One thing is clear from this definition, and that is a novel is a work of fiction. Although it may contain elements of realism and portray human existence, it is still a result of the author’s imagination. The events portrayed never happened, or if they did, it didn’t happen in the way it has been narrated.

There is no limit to what the mind can imagine. Thus, a novel can come in different styles, topics, and categories. The categories are so broad that every author can find a niche to explore and showcase their imaginations.

There are several categories of novels. The categories are thrillers, mysteries, suspense, science fiction, detective, romantic, realist, historical, etc. While some can stand on their own, others may be combined to create one story in a novel. Some of them are briefly discussed below.

The story of Mystery novels revolves around unsolved crimes. Most times, it could be a murder, but not in all cases. Commonly, the person who is on a mission to solve the mystery becomes the protagonist. The detective could be an amateur or professional.

The other characters may be used as support for the detective in solving the mystery, or they could be the suspects. The famous novels by Agatha Christie, such as Death on the Nile, The Murder at the Vicarage, and The Day of the Jackal by Frederick Forsyth, are all mystery novels.

In Thriller novels, the protagonist is in danger from the outset. These novels’ unique characteristics create suspense, horror, anticipation, and fear in the person reading. Examples are Gone Girl by Gillian Flynn, The Shining by Stephen King, and The Vampire Chronicles by Anne Rice.

The primary focus of Romance novels is the relationship and romantic love between two people. It usually has an emotionally satisfying and happy ending. This is one of the oldest types of novels and boasts of some classics like Jane Austen’s’ Pride and Prejudice, Margaret Mitchell’s Gone with the Wind, and the modern ones like Nora Robert’s Vision in White.

It is easy to know what this stands for, just by its name. Historical fiction makes up fictional stories out of real events and places in history. Some examples of this kind of fiction are stories based on prominent historical figures. Also, iconic works of historical fiction include Ivanhoe, A Tale of Two Cities, and The Hunchback of Notre Dame.

The focus of Realistic fiction is to tell a very practical story in the world. It discourages embellishment or flourishes that portray a highly imaginary world. Some great realist fictions are: To Kill a Mockingbird by Harper Lee, The Kite Runner by Khaled Hosseini, and The Fault in our Stars by John Green.

This type of novel deals with speculative world-building. Science fiction tends to imagine a world that’s different because of technology. In the early times, science fiction saw works like Jules Verne. Another notable writer in this genre was George Orwell and his seminal classics. Nowadays, science fiction has become a trendy genre. The Lord of the Rings by J.R.R. Tolkien, The Diamond Age by Neal Stephenson, and Frankenstein by Mary Shelly are examples.

This is similar to Science Fiction, but rather than base its imaginations on technology, Fantasy novel draws its imaginative plots based on magic. It explores the possibilities in the world when magic is in play. The famous Harry Potter series is a perfect example of a fantasy novel.

Fiction reflects the writer’s imagination. Put merely, fiction is a made-up story. A story might look real, with real names of persons and places, but it can still be fiction. This is because an author telling his story can use real things to represent his imaginations, except for fantasy novels that bring non-existent elements.

Fiction tends to focus on imaginary ideas and events. A fiction writer gets an idea and elaborates on it to make the audience believe that the whole thing they read is occurring. He tries to paint a picture in the reader’s mind. He pours out his imaginations on the book’s pages to convince the writer that the events did take place. The fiction writer has the liberty to be elaborately descriptive.

Let’s take the example of the famous Mario Puzo’s novel “The Godfather.” He used real names of persons living in real cities. The plot is based on the cultural imaginations of the US society at a point in time.

However, suppose one should go to those cities and inquire about the exact names. In that case, the likelihood of finding them living out the same characters portrayed in the novel is almost non-existent. It is because of this that novels often have disclaimers.

With the disclaimer, the writer communicates that the character, events, places are all products of the writer’s imagination. So when there is any resemblance to any person, event, place, it becomes coincidental.

So, we should always know that while fiction may have elements of realism, it is still made up of imaginary things, people, events, places, and writing.

Nonfiction is a narrative based on facts. It could have been in existence at the time of the narration or had been in the past. Nonfiction is not the writer’s creation but relies on available facts accessible to him. It centers on real-life ideas and events. A nonfiction writer cannot pour out his imaginations because the narration is straightforward, natural, and deals with events as they happen. It is simply a recollection of facts.

Some essential elements of nonfiction are clarity, directness, and simplicity. The standard that nonfiction must uphold is higher than fiction. The writer doesn’t have the liberty of his imaginations and so restricts himself to his information. He cannot fabricate tales but instead tells it as it happened. Credibility is the fulcrum of a nonfiction work. However, this does not mean that the writer cannot make conjectures or elaborate on his opinions on a particular issue in a nonfiction work.

You can refer to nonfiction as prosaic literature. It touches on several topics, which cuts across people, irrespective of their differences. It can be instructional, informative, offer commentary, or just humor. So long as it is not a figment of the author’s imaginations but borne out of real facts, it belongs to the broad category of nonfiction writing. Autobiographies, biographies, documentaries, history books, and journals are examples of nonfiction.

One factor that clearly distinguishes fiction from nonfiction is that fiction is unreal while nonfiction is real. Works of fiction are usually broader than nonfiction. Fictions are for entertainment purposes, but nonfiction educates and shares the beliefs of the writer. Their similarities lie in the fact they both have characters, setting, plot.

So, Is a novel fiction or nonfiction?

In everyday parlance, the novel associates most closely with fiction, unlike nonfiction. Going by the definitions and explanations given above, this position stands true. This is so even where a novel appears to be very real. Novels are usually works of fiction. However, authors can infuse actual human events and history into their works.

There are also full-fledged historical novels that focus on a particular time in history. Others are semi-fictional. They combine reality and imaginary stories about actual historical figures. An example would be the Mario Puzo novel.

One should be careful not to assume that every fictitious tale automatically falls into a novel category. Some prose work may be fictional and still not meet other novel criteria, so it cannot be called one. So while all novels are fiction, not all fiction is novels.

Hope that this article has provided a clear insight as to whether a novel is fiction or nonfiction.