Is Nonfiction Real Or Fake? Check Out The Answer 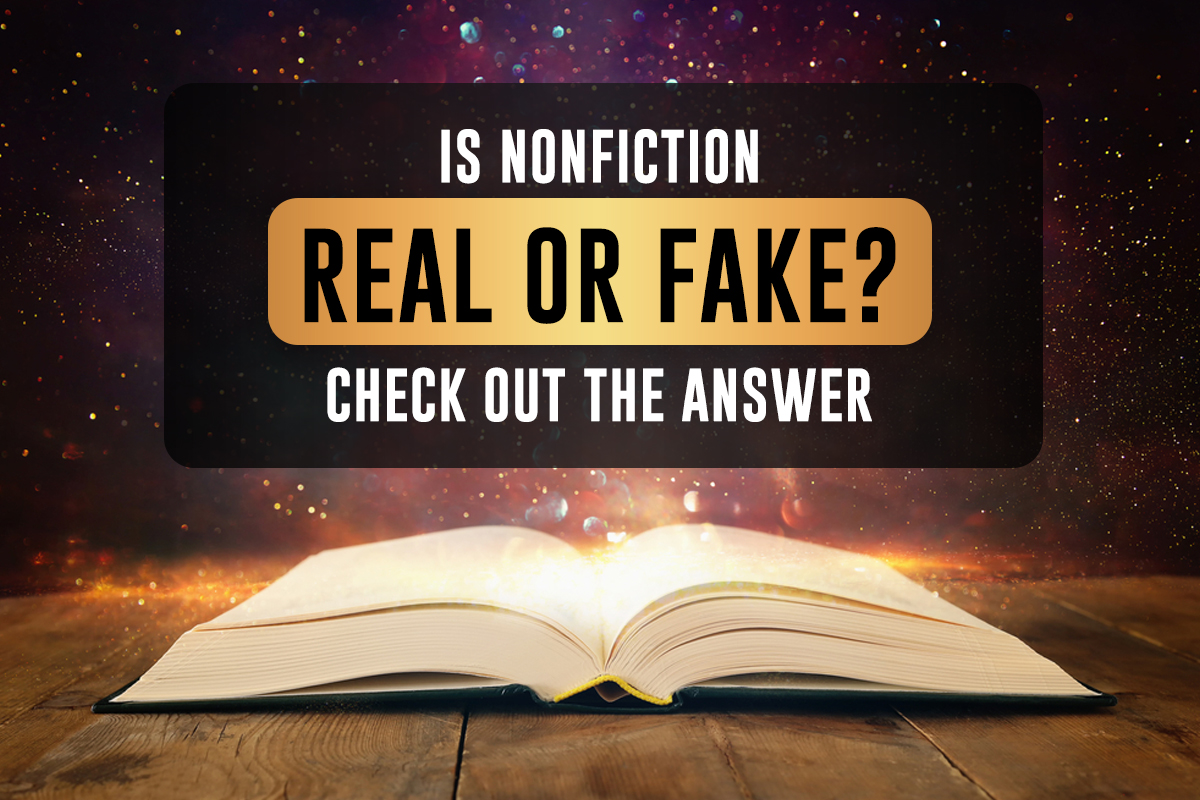 Today, the line between what we call fiction and nonfiction is much slimmer than it had been in the past. Nonfiction writers try to make their stories more interesting by using creativity in how they deliver the truth.

Is nonfiction real or fake?: Introduction To Nonfiction

Every piece of writing is unique in its originality. The word real or fake ideally shouldn’t be associated with any genre of literature.

One of the best words to attach to the art of creative nonfiction writing is to say actual or fact. To use the word “actual” is preferable to the word “truth.” It is so because writers of works of fiction also claim that they write the truth.

They say that they must invent to tell this truth. The word actual seems to cover the concept of what nonfiction is as compared to the word real. What is and what is not real is continually up for debate. The term real is full of suppositions. The word fits better because it simply refers to reality.

A work of creative nonfiction starts with a picture of something that happened and not with something imagined. What is or indeed was, or what happened is the picture in mind to be represented. From this point, we might move in any direction of creativity. However, the actual incidence is our focus.

As attributed to the storyline’s reality presented in a piece of writing, nonfiction is considered a real work of literature. Nonfiction, though it could be creative in its writing, is first about the representation of reality. Your life or that of the world around you serves your raw material. The theme of writing could be any part of reality.

Nonfiction relies on facts, and it reports actual events. It, therefore, can be classified as ‘real.’ Usually, nonfiction has a higher standard to uphold than fiction. However, it’s not unusual to find it using many of the fiction techniques to make it more appealing to the readers.

Nonfiction books contain prose writing which relies on facts, real people, and actual events, like history or biographies. Most nonfiction books serve the purpose of informing or expressing. So, is nonfiction real or fake? Before we go into that, let us first define what is nonfiction.

Nonfiction is a broad genre of writing. It consists of all books that do not center on a fictional story. Nonfiction writings can focus on history and biography. It can also be instructional. It sometimes offers analysis and humor. It can also analyze philosophical questions.

Any book that is not rooted in a made-up story is said to be nonfiction. Nonfiction deals with facts and real-life events. For example, the book A History of Modern Europe is nonfiction. It is nonfiction because it talks about real things, and its writer aims at factual precision.

Nonfiction is simply a piece of writing that precisely describes real-life events and real people. It’s the opposite of fiction, so it’s not fake. The word fake implies the intention to deceive. Fiction, however, is the proper name given to a piece of writing with some level of imagination. It is common to find nonfiction books with tables of content.

How Is Nonfiction Different From Fiction?

The contrast is sometimes unclear. For example, what is a novel based on real occurrences with a few imagined details put in it called? What about poetry that adorns biographical incidents with imaginative concepts?

How about an educational chronicle with dramatic presentations of historical events? These texts don’t fall into a single genre, and there is an argument about how to classify them. It would probably continue endlessly.

In summary, nonfiction contents are rooted in true events. Nonfiction in writing and literature depends on true events. All the information contained in a nonfiction work should be verifiable if possible. However, many nonfiction books proffer heavily arbitrary opinions on those true events.

Generally, however, stating the difference is easy. Most operas, short stories, ballets, narrative films, plays, and novels are fiction. Most essays, histories, memoirs, scientific papers, documentaries, and textbooks are nonfiction.

Aside from fiction being made up and nonfiction being factual, the number of facts presented in a work of nonfiction directly determines its reliability. However, including facts in fiction work does nothing for it as this does not change its genre.

Fiction is usually more detailed than nonfiction. Nonfiction writing requires references. Fiction usually tells a story primarily for entertainment. On the other hand, nonfiction seeks to share something that the writer believes to be true. Most times, it aims simply at passing information on factual incidents.

Is There Any Similarity Between Nonfiction And Fiction?

Nonfiction and fiction writing have many resemblances in their structures and elements. They can both contain a plot, a setting, and characters. The two types of writing can contain traces of truth or real people, real places, and real events.

Is nonfiction real or fake: Genres Of Nonfiction Books

Nonfiction books can be in various categories. These classifications depend on the concept the book covers. Here are examples of well-known types of nonfiction genres.

Historical nonfiction contains true accounts of historical times and occurrences. Some histories dwell entirely on unbiased facts. Also, other histories pass through the writer’s lens and personal beliefs. Whatever the case, history books must tell true stories to be certified as nonfiction.

This category of nonfiction focuses on the true-life story of a specific subject. You write biographies in the third person about someone who is not the author. The subjects write their memoirs or autobiographies.

Travelogues are closely related to memoirs. They tell the writer’s specific experience traveling somewhere. Travel guides happen to be more instructional, offering suggestions and practical information for travelers heading for a particular destination.

Academic texts are to instruct readers on a definite topic. These textbooks form the basis for a school year’s curriculum. Adults who want to learn a specific trade, such as car repair or music arranging, use academic texts. Most Americans first come across academic books in the form of assigned school textbooks.

These books are quite synonymous with academic texts. Very many of these books are published by publishing houses that affiliate with a university. This genre runs the span from scientific theories (Newton) to philosophy (Aristotle, Plato, Descartes) to analyze scientific or cultural fact.

Journalism is quite a broad subgenre of nonfiction. It surrounds many media. Journalism is most usually absorbed in newspapers and magazines, monthly journals, TV news reports, etc.

Journalism reports are on true life events that generally, though not always, have a connection to a contemporary audience.

Self-help books happen to be some of the best-selling books in the world of nonfiction. Many of these self-help books are centered on confidence, business success, and relationship advice, staying organized, financial management, and dieting.

It is related to the self-help subgenre. However, this is more focused on specific skills. It serves as guides and how-to manuals. These include cookbooks, musical notations, athletic instructions, and tutorials for home hobbyists.

These are other forms of creative nonfiction. It is a category the writer reveals surveys and studies on real-world situations through his view. Sometimes, this perspective can be political, sometimes humorous, and at other times, it’s purely reflective.

The only reason this subcategory isn’t classified to be fiction is that it is on objective occurrences. These occurrences could be historical or even present. You might have heard of the word creative nonfiction (CNF), and you begin to wonder how an actual event can be creative?

What Then Is Creative Nonfiction?

Both personal and public history can make up the storyline of creative nonfiction writings. It makes use of memory, experience, observation, opinion, and all kinds of research. Sometimes, it can do all of the above at the same time. At other times, it is more selective.

Is nonfiction real or fake?: Conclusion

Nonfiction writers can make up their writing out of whatever receptacle. They are capable of imagining and being creative while still working within the vast framework of reality. Therefore, we can categorize nonfiction as real. Though it uses some creative mechanics here and there, the storyline is of real-life scenarios, and it hopes to represent a real course. So, is nonfiction real or fake?

In the world of notebooks, spiral notebooks never go out of style. Despite the existence of digital notebooks, END_OF_DOCUMENT_TOKEN_TO_BE_REPLACED

As an author or publisher, you’re accustomed to using the power of words to captivate your audience’s interest. END_OF_DOCUMENT_TOKEN_TO_BE_REPLACED

An electronic device that embraces portability and functionality, that’s what defines iPads in our world today. They’re a END_OF_DOCUMENT_TOKEN_TO_BE_REPLACED

If you’re looking for a cost-efficient solution for your print projects, you’d want to try publishing your content END_OF_DOCUMENT_TOKEN_TO_BE_REPLACED