Is Nonfiction Hyphenated? This Is What You Should Know 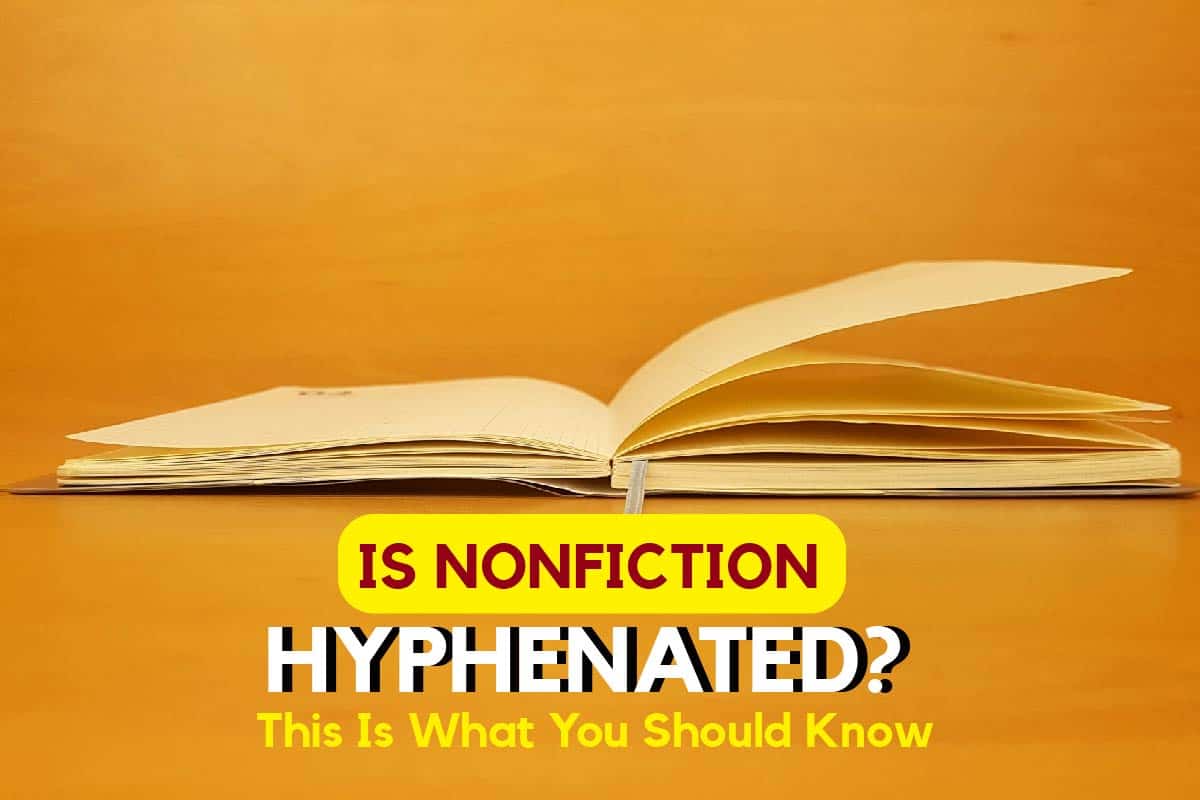 Sometimes, you’ll find the word “nonfiction” written without the hyphen. But when you pick up another book to read, you find “non-fiction” and this time with the hyphen. Now you’re wondering which of them is most accurate to use. Is nonfiction hyphenated or not? Well, you’re not alone.

Keep in mind that hyphen or no hyphen, the meaning of words doesn’t change. But to avoid making a mistake in your writing, it’s crucial to know which of them is accurate.

Nonfiction Or Non-Fiction: Which Of Them Is Correctly Spelled?

According to Google’s survey of publications, nonfiction is way more popular than hyphenated non-fiction. However, both are in regular use and are correct.

If you search Google books, you’ll find both versions in use.

What Does It Mean For A Word To Be Hyphenated?

A word is hyphenated when it contains a punctuation mark called the hyphen. This punctuation mark joins two parts of a word or two compound words. It also allows a word to break at the end of a line.

What Is Hyphen Called?

The hyphen’s sign is a dash-like (-). It’s a punctuation mark used to join words. You can also use a hyphen to join part of words and separate syllables.

A hyphen is used in a compound modifier when the modifier comes before the word it is modifying. You can also make use of hyphens to separate the syllables of a single word.

Most writers usually apply hyphens in the formation of compound words. As a writer, if you ever get stuck and unsure whether a compound word has a hyphen, check your dictionary.

The Use Of Hyphens: What Are Compound Words?

Since we have established that hyphens are mainly used in compound word formation, it is essential to explain what compound words are.

Compound words consist of more than one main word. It is the formation of a new word with two or more words. Sometimes, it could be a suffix or prefix before the main word. An example is “mal-nutrition” and the word “enjoy-ment.”

In these examples, you would notice the use of a prefix and suffix ‘mal’ and ‘ment’ respectively before the independent words’ nutrition’ and ‘enjoy.’ Other times, it could be the combination of two or more independent words.

An example of this is ‘look-alike.’ Also, more than one word can make up compound words like ‘mother-in-law’.

How To Use Hyphens

Use hyphens to attach two or more words:

In professionally printed material, particularly newspapers, books, magazines, the hyphen divides words between the end of one line and the beginning of another line. It allows for an evenly balanced right margin.

It does this without highly varying and distracting word spacing. The rules for such word division are beyond the scope of this guide. However, if you’re writing for a publication that requires it, the typesetter will handle the word division. Without using the hyphen for this purpose, words will be ambiguous, too long, and hard to read.

Use a hyphen to write compound numbers:

Aside from using a hyphen to form compound words, hyphens can be used when writing compound numbers. Examples are twenty-three, fifty-six, and seventy-three. Hyphens have been introduced into spelling the compound numbers.

Use a hyphen to avoid mix-up or an awkward combination of letters:

You can also use a hyphen to avoid moving up the intended meaning of a word. Also, you can use it to curb a strange-looking combination of letters. For example, in re-sign, the hyphen has been used to represent the original intended meaning of the word, sign again.

Hyphen’s use helps to avoid confusion as to whether the word means to leave a job as in ‘resign.’ Also, in words like ‘shell-like’ and ‘semi-independent,’ the use of the hyphen has been adopted to deal with strange-looking words like, ‘shelllike’ and ‘semiindependent.’ These are practically what we would have without the hyphen.

The hyphen has become necessary here, and the last letter of the first word and the first letter of the latter are the same. However, in words like ‘childlike’ and ‘semiconscious,’ the hyphen’s use is unnecessary.

Use a hyphen in splitting words at the end of a line only when necessary:

We can use the hyphen to continue words on another line. If the space on an existing line cannot contain a word, you can introduce a hyphen to help in dividing the word at the end of the line. However, the break with the use of a hyphen should only be made between syllables—for example, pref-er-ence, sell-ing, etc.

Use a hyphen with the prefixes and suffixes:

Hyphens have been deployed in the use of prefixes and suffixes before words. The English language has tons of suffixes and prefixes, including ex-, which means former or old. Ex- can be used in examples as ex-student. It is to say a former student.

Do not use the last or first letter of a word at the end or beginning of a line:

Yes, we agree that you can use hyphens to break words at the end of a line. However, you should not put the last letter or the first letter of a word either at the start or end portion of a line. Doing this looks awkward, and it is not acceptable.

Do not put two-letter suffixes at the beginning of a new line:

It is inappropriate to separate a word to leave a two letters suffix separated. For example, in lovely, do not separate it to leave ‘ly’ at the beginning of a new line. In words like eval-u-ate, you separate only on either side of the u; do not leave the initial e- at the end of a line.

For line breaks, split words that already have hyphens only at the hyphen.

In the breaking of compound words that already have a hyphen; you break only at the point where the hyphen initially is. For example, in words like mass-produced, self-conscious, it is appropriate to break them at the hyphenated spots. You should not write things like ‘mas-sproduced’ or ‘selfcon-scious’

Use the hyphen in writing double-barrelled names:

Examples of such names are José-María Olazábal, Jean-Paul Gaultier, Claude Lévi-Strauss, Philip Johnson-Laird. However, some individuals with such names prefer to omit the hyphen. Some examples are Beyonce Knowles Carter, Kim Kardashian West, Hillary Rodham Clinton.

Above all, in determining whether a word should be hyphenated or not, strive for clarity. Ensure not to use a hyphen unless it is necessary. Where possible, follow conventional usage. On this last point, consult a reliable dictionary; Collins or Longman is recommended. Since the conservative Chambers and Oxford dictionaries frequently show hyphens, they would not be good options for this purpose.

Below Are A Few Ways To Find A Definitive Answer To Whether There Should Be A Hyphen In Nonfiction.

If you check up Amazon’s most read and most sold-out nonfiction charts, you will realize that Amazon does not hyphenate the word nonfiction.

Barnes & Noble’s nonfiction bestsellers list has been observed not to hyphenate the word nonfiction.

If you check up the New York Times Bestsellers notification list, you will realize that the word nonfiction is never hyphenated.

The Chicago Manual of Style writes it as nonfiction without the use of a hyphen.

Now, why is there so much inconsistency in the name of the genre?

Does it matter? I think it does. If you consider the word “fiction,” it is derived from the Latin fictiō, which means “to create.” Creative nonfiction, on the other hand, roughly translates to “creative non-create.”

It intrinsically implies that the name for this genre(non-fiction) makes no sense. “Creative non-create”–does that even seem to make any sense? Such writing of any kind that takes root in fact or truth requires no creativity on the writer’s part. Hyphenating nonfiction, in my personal opinion, highlights the fact that creative nonfiction as a genre is defined by the fact that it’s ‘not-fiction,’ ‘not-creating.’

The conventional grammatical rules for when-to-hyphenate vs. when-not-to-hyphenate are quite confusing and ambiguous most times. In Reality, the only reason you would need to hyphenate nonfiction is because of the prefix “non.”

But then, the only reason why you should hyphenate the prefix is when the attachment of it creates an awkward double vowel or consonant in the middle of the word as in non-native vs. nonnative, ultra-ambitious vs. ultraambitious.

Since that awkward doubling does not occur in nonfiction, I think grammatically, hyphenating the word nonfiction looks improper and unnecessary.

However, if you still feel hyphenating the word “nonfiction” is the best option for you, feel free to do so. The major focus is your writing style and quality of the book.

In the world of notebooks, spiral notebooks never go out of style. Despite the existence of digital notebooks, END_OF_DOCUMENT_TOKEN_TO_BE_REPLACED

As an author or publisher, you’re accustomed to using the power of words to captivate your audience’s interest. END_OF_DOCUMENT_TOKEN_TO_BE_REPLACED

An electronic device that embraces portability and functionality, that’s what defines iPads in our world today. They’re a END_OF_DOCUMENT_TOKEN_TO_BE_REPLACED

If you’re looking for a cost-efficient solution for your print projects, you’d want to try publishing your content END_OF_DOCUMENT_TOKEN_TO_BE_REPLACED