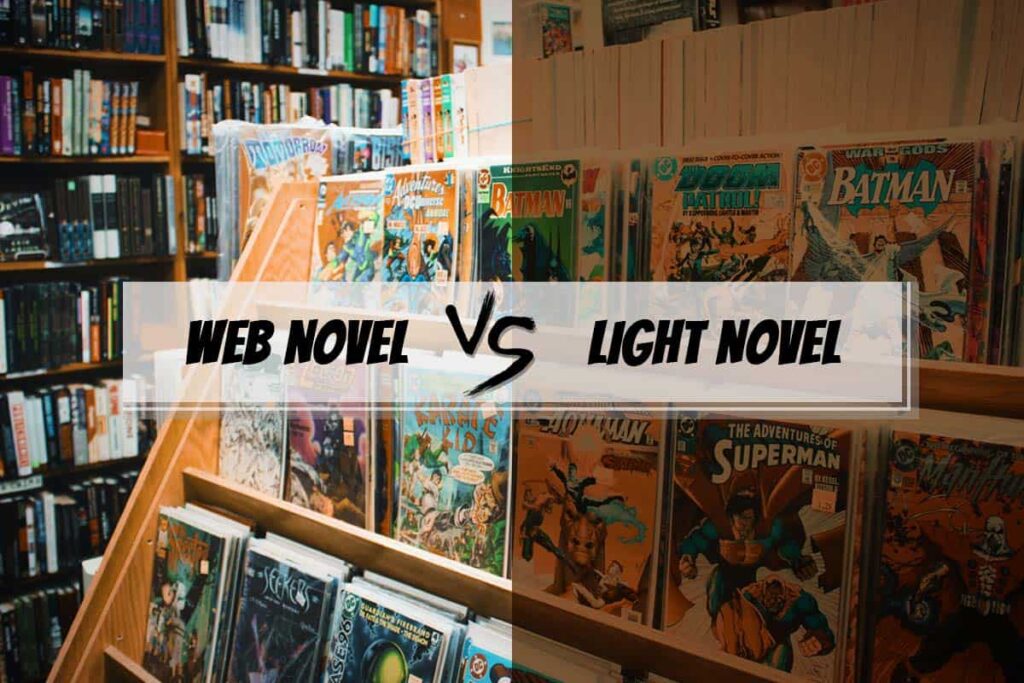 You may have gone on the web looking for novels, but find one showcasing two versions of the same. It could appear as a Web Novel and as a Light Novel. Web novel vs light novel, not everyone is familiar with what these novels are. But it’s worth knowing.

So, to guide your reading choice, we have decided to look into what each version of novel entails.

What Is A Web Novel?

As the name connotes, Web novels are novels published on the web. When an author starts writing, rather than traditional publishing in paperback, they publish the work as a web novel first. This can be done on their site and used to attract traffic to the site and advertise their work.

They can also publish on sites that host web novels. Since they are online, Web novels can be read free of charge or upon payment. Some of these novels are written as serials, with the site publishing one chapter at a time.

Over time, if the novel has gained popularity, the author can be approached by a publishing company to publish the web novel as a light novel. Before the publishing is done, the writer gets to edit the novel and expand the plot or take out some things that are not relevant to the story.

There are thousands of web Novels you will find on different web novel hosting sites. While you can read some for free, you will need to pay a subscription or pay for each novel you read. Some web novels you will find include Your Name, Overlord, No Game, No Life, and The Red Lands. Some of these novels are also available in the Light novel version. Some have even been adapted into anime, games, and action movies.

There are also apps specially built for web novels. You can download these apps, and the novels read at the reader’s own pace. Some of the apps are the Webnovel, BakaReader Ex, Wuxiaworld, and GoodNovel.

Light Novels are Japanese-styled novels initially published on the web in chapters and subsequently edited and compiled into one book, usually in paperback. These novels contain about fifty thousand words and are published in the Japanese bonkobon style, a paperback A6 size designed to save space and cost.

The light novels are illustrated using the Japanese Manga style, a form of illustration for comics and cartoons. You will find the illustrations in colorful print both on the cover of the novel and inside. The designs and colors make these novels very attractive to young readers.

They can also be serialized in literary magazines or published in volumes. Because it uses the Japanese bonkobon style of publishing, these novels are usually sold cheaply, giving readers a wide choice to pick from without spending so much.

In recent times, the plot is gradually moving away from fantasy to the world as we know it. Still, most of the light novels of Japanese origin will have fantasy plotted into it.

The Light novel has been around since the mid-1970s but mostly in Japan. Most persons consider Matoko Arai as the originator of this genre of Literature. His works were targeted at the youth and written mainly in slang.

In America, there are several translations of the Japanese Light novels into traditional novels for young adults. For the Japanese Publishing Industry, Light novels have become a great source of income as the books are usually mass-produced and more writers continue to stream in.

There are thousands of light novels available in paperback. With the advent of technology, you can also read most of these novels online. The recent trend for authors of light novels is to use long titles, some of which are complete sentences.

Some of the popular titles include: All you need is Kill, A Sister’s all you Need, My next life as a Villainess: All Routes leads to doom!, Me, A Genius? I was reborn into another world, and I think they’ve got the wrong idea! The Legendary Slayer, The Legend of the Galactic Heroes, The Melancholy of HaruhiSuzumiya, etc. Most of these Light novels have been adapted into anime, Japanese manga, video games, and action movies.

It is argued that the Japanese manga, which is a style of cartoon and comic illustration, is a replication of western cartoons. It, therefore, follows that the Light novel also derives its inspiration from Western Pulp Fiction.

Pulp fiction used to be popular in the early nineties. It’s fiction with sensational stories and usually published using paper made from wood pulp, a cheap kind of wood. It served as a form of entertainment along with the radio, which was the media available then.

With the coming of World War II, paper became scarce, which affected these stories’ publishing. Eventually, most publishers had to stop publishing. By the time papers became readily available again to enable publishers to get back to production, television had taken over the entertainment scene.

There were also more paperback novels and comic books for reading pleasure. At that point, it made no economic sense to continue publishing, and that was how it gradually faded out.

There is a fear that the Light novel will also go the way of pulp fiction. But rather than fade out in the face of technological improvements, this genre of Literature collaborates with other entertainment media to produce content. That way, its stay in the industry, whether for literary purposes or entertainment, is guaranteed.

Why Light Novels Are Gaining Popularity

We have also noted that the Light novel is written in simple English and the illustrations make the story easy to understand and follow and, as such, easy for new readers. The boredom that comes with the traditional novels filled with letters is eliminated. The illustrations contained in light novels also make for good entertainment.

One good thing about the Light novel is that it can be adapted to other entertainment media. The book itself may not have a popularity. Its different versions, like anime, action movies, or games, can become very popular. Publishers and Entertainers use these anime to drive the original work’s sales, the light novel. That way, both parties benefit.

The author benefits from book sales while the entertainer benefits from the anime production. One of the most popular Light novels that made a big wave as an anime is ‘No Game, No Life.’ Originally written as a web novel and later compiled to create a Light novel. It is reported that when it first aired as an anime, there were about one million of the paperback in circulation. Three years later, that number had tripled.

As an Author considering publishing, you can choose to go for either a web novel style or a light novel style. If you want a constant flow of income, you might want to go for the Web novel. This is because the publishing site will pay you as long as you keep updating different book chapters and people keep reading them.

Another advantage is that you can get your book out to the public even when you haven’t completed it. You can send it out in chapters giving you more time to explore and expand your plot while at the same time making money for the parts already published. If the site belongs to you, the author, you not only make money from the traffic, but you also get to advertise your other works on the site and gain popularity.

The Light novel also has its advantages. It is straightforward to write as it uses simple language with a lot of illustrations. Most publishing sites for this kind of novel encourage young writers by hosting writing competitions yearly.

The most popular of these competitions is the Dengeki Novel Prize, which has continued to discover new literary talents yearly. Through these competitions, young writers can explore their skills and eventually get into the mainstream of Light novel publishing.

For the reader, a light novel is easier to read than a traditional novel. This is one of the reasons it appeals to teenagers and young adults. The light novel also comes with fewer errors than the web novel because it has gone through editing.

Because of its storyline and illustrations, Light novels can easily be adapted to anime, games, and action movies. Over the years, these adaptations have become very popular in Japan and Asia as a whole and other parts of the western world.