How Many Pages Are In A Comic Book? Tips For Comic Writers 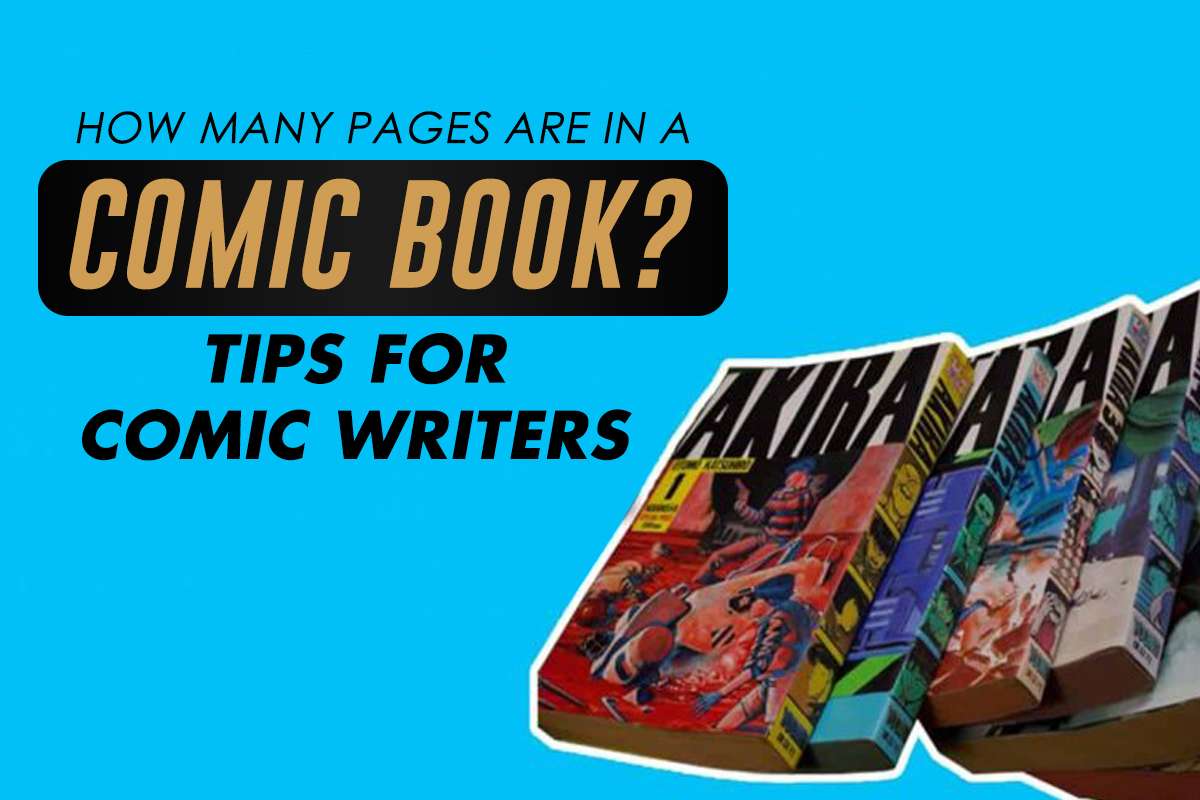 Are you a huge fan of comics? Are you curious about the blood, sweat, and tears that go into writing and developing the comic books you read? Or are you a budding comic book writer? If so, one of the things that you’re probably thinking is how many pages should be in the comic book that you are planning to create.

Sit back, grab your favorite go-to snacks, relax and enjoy as we break down the mechanics involved in creating a comic book.

But before we go deeper, let’s answer one mind-boggling question.

How many pages should a comic book contain?

There is no fixed word or page count for comic books. The standard word count per comic panel is usually between 25 to 35 words, and a page contains roughly 70 to 200 words, including title, dialogue and sound effects.

An ideal comic page count could be 32 to 48 pages and could be more or less as the creative process goes and as long as the pages are in multiples of four. Sometimes, smaller page counts are commonly between 22-24 pages.

Comics also usually run for 4 to 6 issues. You can find the occasional 7th or 8th issue, but these are rare. Therefore, a four-series long comic book with a word count of 100 per page of 32 pages produces a word count of twelve thousand, eight hundred words and one hundred and twenty-eight pages. These numbers are not fixed and vary according to the interest and choice of the comic creator.

What Is A Comic Book?

A comic book or comix— as they are fondly referred to by middle school fan base— is a form of expression using sequential images or drawing combined with text or other visual formats to convey an idea to convey and idea a piece of information. The creation of comics is a combination of the visual art and literature form to give you the best of both worlds.

Like most written work, comics touch on the fictional and nonfictional genres and cover many themes like a slice of life, action, humour, horror/ thrillers, mystery, adventures, superheroes, etc.

How Did Comic Books Come About?

The art of using sequential images in stories began many centuries ago in ancient times when nations like Egypt, Rome and Greece decorated their walls, tombs, pillars etc., with pictures and tales of the exploits of some of their gods.

However, the world was first introduced to the comic book industry’s printed form in 1755 when Koikawa Harumachi created ‘Kinkin Sensei Eiga no Yune’, which translates to ‘Master Flashgold’s Splendiferous Dream’ in English, about a low-level samurai who dreamt of a luxurious life.

The book was prevalent in its home country of Japan but did not attain international acclaim. Some other artists and creators tried their hands at creating these comics. The earliest recognized and most notable is Rodolphe Töpffer’s ‘Histoire de M. Vieux Bois’, which means ‘Adventures of Obadiah Oldbuck’ when translated.

The Popularity Of Comic Books

The comic books scenery has grown immensely popular worldwide, especially in European countries like the United Kingdom, France, Belgium, Italy, etc. Asian countries like Japan, China, the Republic of South Korea, etc., the United States if America. Japan houses the largest publication and printing of comics in the world.

The industry has amassed its fair share of die-hard fans. The casual audience is so popular. Fans from far and wide make extensive preparations and come together once in a while to attend scheduled Comic-Con events. They get to dress up like their favourite comic book characters, conversion with fellow fans as well as having their comic books signed by their favourite creators.

The industry is so prominent that many comic books have transformed into movies, cartoons and live-action adaptations. Most fans have described the comic book as a reprieve and an escape from reality.

The United States government has recognized the impact of comic books on the behaviours and attitude of its young fans. They have made plans to take rake advantage of this influence by developing a comic book project to educate children on good morals and sound thinking to improve their personalities, attitudes and reasoning in the real world.

The Style For Comic Books

Different countries have different preferences in the styles of drawing and storytelling they use to produce comic books. The Western Comic Art Style, predominantly used in the United States of America and several other western countries, uses shading and shadowing to emphasize certain features of the characters and the settings and employing the use of soft tone and pale colours to enamour the audience without empowering them.

Unlike other countries, the mangas in Japan come in black and white; the art technique is usually delicate and elegant. The characters appear well proportioned, attractive, and almost realistic. The background and settings in manga maintain their connection with the readers. It does this without taking away from the general plot.

Most countries use the cartoon art style, which is usually bold, colourful, fun and engaging. Of course, some comic creators choose to apply their unique traits in their creative processes. For example, Mike Mignola uses dark and edgy graphics to create the hit comic, hell boy.

While closely similar, some differences have been pointed out over the years between comics and other forms of sequential storytelling, especially regarding design, style, editing and texture. There is a notable difference between a cartoon and comics as cartoonists use individual or single panel mediums when creating their images while comic creators utilize sequential panel images.

The difference between comic books and graphics novels has to do with their continuity; graphic novel offers a sense of finality. They are usually standalone books, even when they are in a series. You can read a graphic read as an individual book without wondering what came before and what will happen next.

Comic books, on the other hand, are released periodically, and the later books are usually a continuation of the former books. Therefore, it is almost impossible to get the entire storyline without reading the full series. Another critical difference between a comic and a graphic novel is that graphic novels are typically longer and more put together with better image and colour quality than comic books.

Also, despite Japanese mangas technically being comic books, they are significantly different from other countries’ comic books. While most comics are mostly in colour, mangas are often always in white and black.

Another critical difference between manga and a comic book is that comic books are typically read similarly to other book forms, from left to right. Mangas, on the other hand, was drawn and read from right to left.

A comic book is a combination of the elements of writing, drawing, colouring and printing. Certain things need to be put in place to make use of these facets to create a comic book.

The first thing is to have an idea of the story you want to tell. Just like in books, a comic creator must have an idea of the events and the dialogue expected to take place in the story. It would be best if you also had an idea of the characters, roles, settings, and, notably, your comic story genre. A comic book without a plot or a sense of direction might be unappealing to the readers.

Draw out a draft sample of the events that are to take place in each scene of the comics. It’s not to be too detailed but sufficient enough that you have an idea of where your story is going. Incorporate your ideas into the draft to see if you like the way they fit or if you would like to make specific changes. Most comic creators generally use A3 or A4 paper for the draft, which will eventually reduce to fit the final product.

At this juncture, you get to pick the art style you like for your comic book.

At this stage, decisions about what type of paper you intend to use the size of the comic, the arrangements, the panels, the gutter (which refers to the space between each comic panel), the dimensions, etc.

Most comic creators use 60# for printing single issue comics, 60 and 70# matte paper for printing black and white comics. Full coloured comic books are mostly in glossy 80# papers. The default paper size for most comic books is approximately 6 x 9 inches.

However, the creator has full control of the format and layouts, all of which vary widely according to his preference; once you follow the steps above, you can create, publish and market your comics according to your schedule.

Several comic sites allow you to create your comics for free, including makebeliefcomix.com, write comics, pixton, comic master etc. By the normal standards, a comic series takes 6-10 months, but the numbers differ according to the writer.

When creating a comic book, you don’t just focus on the number of pages as there a lot of things that you need to consider. The process involved in creating a comic book takes a lot of time and work. In most circumstances, many comic creators hire or collaborate with professionals in drawing, editing, lettering, graphics and designs to help put the general idea together and bringing the comic book to life.

But with the know-how, hard work, dedication and commitment, writers can create comic book series without professional help.

In the world of notebooks, spiral notebooks never go out of style. Despite the existence of digital notebooks, END_OF_DOCUMENT_TOKEN_TO_BE_REPLACED

As an author or publisher, you’re accustomed to using the power of words to captivate your audience’s interest. END_OF_DOCUMENT_TOKEN_TO_BE_REPLACED

An electronic device that embraces portability and functionality, that’s what defines iPads in our world today. They’re a END_OF_DOCUMENT_TOKEN_TO_BE_REPLACED

If you’re looking for a cost-efficient solution for your print projects, you’d want to try publishing your content END_OF_DOCUMENT_TOKEN_TO_BE_REPLACED