The procedure for writing comic books is similar to writing a short novel or story. This means there is no strict rule for setting your script. 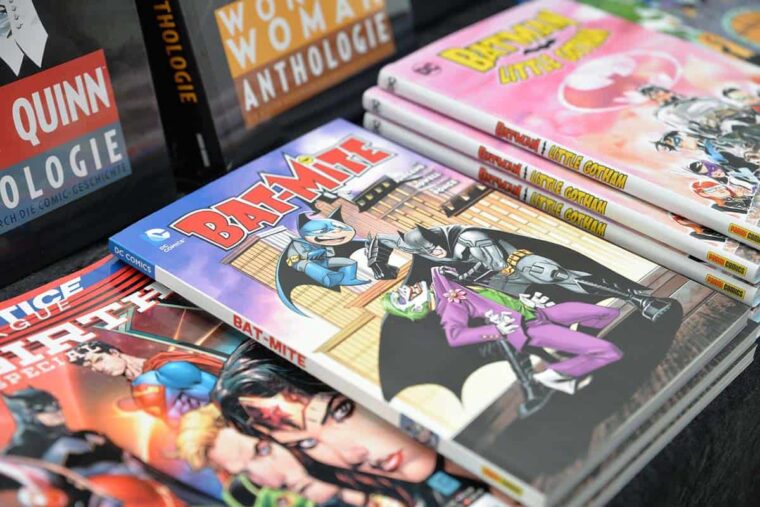 A comic book is also referred to, as a comic magazine or “comic” is defined as a publication that comprises comic arts in form of individual, sequential actions. These comics can also come as descriptive or narrative information.

It is a compilation of comic strips in humorous tones and could have storylines from fiction or non-fiction genres.

How Many Pages In A Comic Book?

You should have a multiple of 8 pages in a comic book. This is not a rule but many publishers today follow this format.

The History of Comic Book Pages

Comic books used to be an average of 68 pages when Marvel begin publishing their works. Today the average number of pages in image comic books are 20+

Over the years, Marvel, the leading comic book maker has revised the number of pages in their comic books based on many factors.

Marvel’s initial 68-page comic books cost around 10 cents to produce. When they began publishing, they wanted to qualify for the postal rates that are the cheapest for magazines in that era. To ensure that your magazine qualified for a cheap postal rate, you will have to include a minimum of 2 pages of pure text with no images.

Later on, Marvel started including letter columns that were included for postal rate discounts. Restrictions were later changed on what qualifies for postal fee discounts.

It is on record that in the earliest days of Marvel comics, the comic books were 68 pages and that becomes the norm. Of the 68 pages, 2 were devoted only to texts while 60 pages were devoted to comic stories containing both images and texts.

The 60 pages were separated were sub-divided into different stories of varying lengths. Things changed a little in the year 1943 when the costs of creating comic books gone up and most comic book publishers knew people are not willing to pay more for their books.

To deal with the situation, comic book publishers decided to reduce the size of comic books from 68 to 60 pages and this began the journey through the decrease in pages. With the reduction to 60 pages, 53 of these pages included real story lines. Captain America Comics #28 was the first comic book to have its pages reduced from 68 to 60.

By the end of 1944, there was another significant reduction in the number of coming book pages from Marvel. This time the number of pages was reduced to 52 with 45 of the pages having the main stories.

The first issue from Marvel that contain 45 pages from Marvel was Captain America number 42. It seems other comic book publishers always follow the Marvel comic book leads, since inception.

Later in the year, the number of comic book pages had dropped to 18 pages but that was too small and publishers had to return and lock it in at 36 pages.

For the rest of the 1940s, Marvel and he likes had maintained roughly 36 pages with 23-25 of those pages with comic book stories while maintaining 2 pages of text-only contents.

When Fantastic Four was released, there were 25 pages of comic stories within. Later on, 2 pages of the letter or pure text column were re-introduced.

At the end of the year 1964, comic book pages were reduced to 25 pages. This was split into 23 pages of comic book stories and 2 pages of letter or text-only. The Fantastic Four number 20 in the series had only 20 pages in it. Though the solo titles were reduced to 20+ pages, the anthology titles did come with an extra page.

The Iron Man and Captain America story had 12 pages and 10 pages respectively plus 1 page of text or letter stories each. At his point, Marvel had reduced its price and maintained it a 12 cents per comic book. Marvel was able to stick to the price towards the end of the 1960s and by the early 1970s, it was increased to 15 cents per issue and it was at this stage the publisher settled for 19-page comic books.

Though the 19-page remained the standard in the 1970s, publishers would rather add one or two pages extra as an exception to the standard.

As we moved to the end of 1971, Marvel Comics decided to introduce a bold plan. The plan later got them on the wrong side of the government. The plan included the increase of price from 15 cents to 25 cents plus an increase from 19 to 34 pages.

When the government objected to the bold plan, Marvel decided to reduce the price of this comic book to 20 cents in the next issue and also reduce page counts to 21. At this time, there was a “No Inflation rule” in place by the government, and Marvel was punished by forceful insertion of a glossy insert into their future issues as a “giveaway” to fans.

At the end of the 1980s, the creation and discovery of new emerging markets led to an increase of pages from 17 to 22 a 50-cent price. The 5 more pages added to the comic books seemed to have generated even more readers from emerging markets.

For30 years now, Marvel comics, the leading comic publishers had maintained 20-page comic books, though prices are currently $1.99 and the 2-page text has remained. The two-page recap section of the comic books now folds out of the cover.

In the early part of the year 2000, the recap page that was reduced to 1 page earlier was eventually removed. This was replaced with the “Previously” page which the publisher has maintained until this day. Finally, in the year 2011, Marvel decided to stick to the 20-page comic books until today. Though there are always exceptions the 20-page remained standard.

This is the reason why you will find most mic books in poor quality papers and soft paper-head issues only. Very few still use some hardcover and good quality printing papers.

The issue of comic book pages will remain a topical issue for a very long time to come. Most comic book publishing companies with stable policies on book pages have always introduced exemptions to such policies for some reason. For the largest publishers like DC Comics and Marvel, the volume of sales and readership seem to determine selling prices.

The number of book pages and prices tend to be more stable with the newer comic book publishers that are still trying to hold onto their readership. These publishers tend to stabilize their prices without reducing their book page numbers to avoid hurting their readers- a situation that may cause a sharp decline in their followership and the reputations of their organizations.