Do You Italicize Poem Titles? Tips For Authors 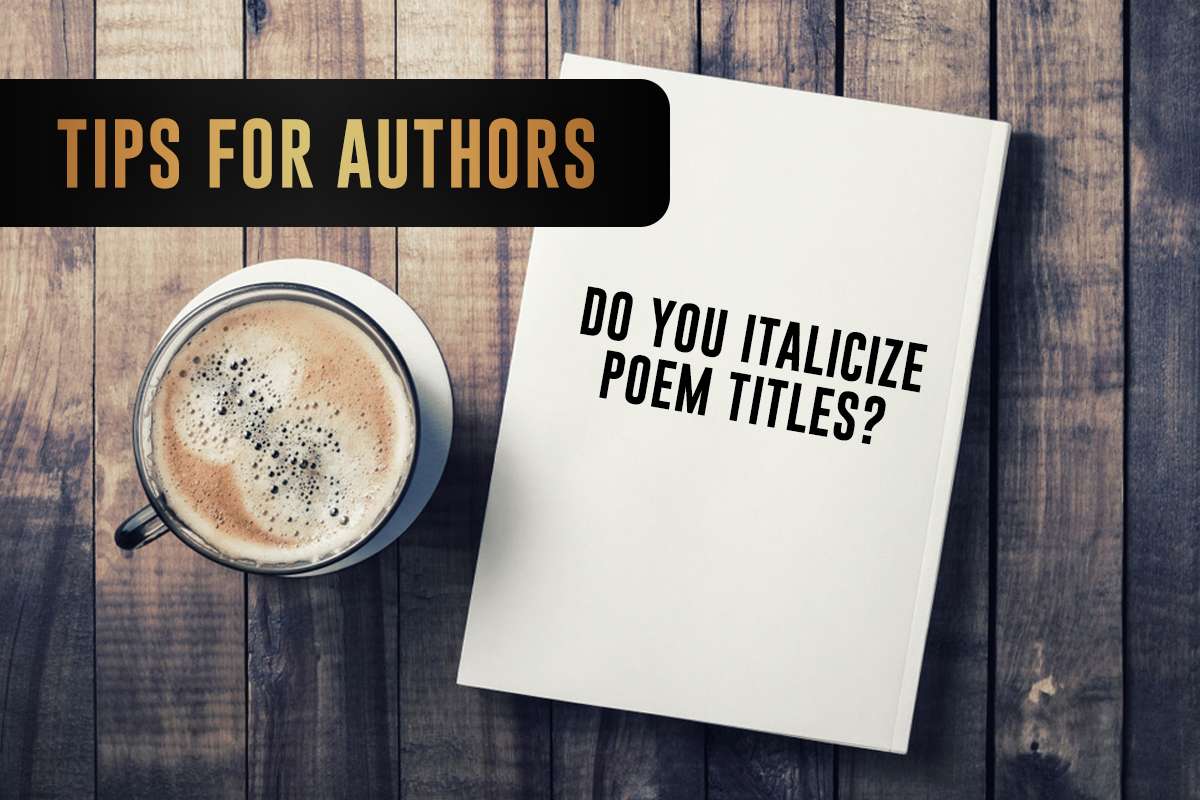 There are rules in writing, in general, which every author must familiarise themselves with.

You may have to italicize movie titles or use other means to emphasize a title. Anyone who comes across the italicized words would know it’s a title. That’s also the essence of italicizing.

Now, here’s the question that has been generating some heated debates among writers

Do you italicize poem titles?

Yes, you can write the poem’s title in italics. You may also need to underline your title instead of italics.

Italics are used for long poems. And it’s easier to italicize words when writing on a computer. If you’re writing on paper or marker board, don’t italicize. Underline the title instead.

Is underlining a poem title similar to italicizing it? Yes, it is. The aim of using both is to make them different from the other words.

An example of a single but long poem whose title needs to be italicized is The Odyssey. Other examples include The Iliad or The Aeneid.

The rule to determine if you should italicize the poem title is the poem’s length is subjective. If the poem is book-length, you can italicize it. Use quotation marks on the poem’s title if it’s up to book-length.

So, that’s the answer. However, we have more in store for you on this topic. Continue reading to find out.

When Not To Use Italics For Poem Titles

We have shed light on this topic before, but there’s nothing wrong with revisiting it.

If the poem is a short one, you do not italicize the title. Use quotation marks instead. As a general rule, quotation marks are ideals for shorter write-ups. It’s used for book chapters, short poems, short stories, articles, and essays.

Another reason you can’t use quotation marks is when the poems are not stand-alone. Short poems usually come in a body of work or collection. They come as an anthology or collection of poems.

The same applies to articles that get published in journals. You won’t find chapters of a published work as a stand-alone. Instead, you publish several chapters of a book as a single document.

Why Do You Need To Italicize Poem Titles?

Long before now, there was little, or no buzz about formatting typed documents. Nowadays, we use italics, quotation marks, bold text, and underlining to emphasize text.

The essence of italicizing poem titles is to make them stand out from other texts. With italics, the text becomes different from other surrounding words. Hence, it draws the reader’s attention to the text italicized.

However, italics do not have a very glaring effect. It is subtle compared to using bold text or an underline to emphasize certain words. And because of these specific rules regarding their use, italics still come in handy for writers.

Although underlining in place of italics is acceptable for poem titles, it is somewhat outdated. The practice was common when typewriters and handwritten documents were trending. Then, typewriters didn’t have the option to italicize.

With the use of computers and word processors, it is now easier to italicize. All you have to do is highlight the text you want to italicize and click on the Italic icon in Microsoft Word. Alternately, you hold down the Ctrl key and press the letter “I” on the keyboard, and the highlighted text will italicize.

Do You Italicize Poem Titles In APA?

APA is a documentation style introduced by the American Psychological Association. The referencing style is common to sociology, psychology, philosophy, anthropology, education, etc.

With the APA referencing style, there is the in-text citation and the one you find on your document’s reference page. Different rules apply to each of them. Another difference is that in-text citation focuses on one work at a time as you write along. It is the reference page that lists out all works you consulted in your work.

If you are using APA style, in-text citation requires that you italicize a stand-alone work title. So, you have to italicize the title of a stand-alone poem or collection of poems.

When citing a poem in-text, the APA format is to write in a round bracket the author’s name, year of publication, followed by the page. An example would be (John, 1995, p.43)

The rule for an in-text citation is slightly different for the reference page. If you are referencing a poem’s title on the reference page, you would also italicize a long or stand-alone poem. The difference lies with shorter poems that are a part of a complete work.

In this case, you would have to write the title of the poem as it is. That it is, it should be in its original form without quotation marks and italics.

Do You Italicize Poem Titles In MLA?

MLA is another citation style introduced by the Modern Language Association. It is a referencing style that is common to disciplines like literature and the humanities.

The style, like the APA, also has an in-text citation. At the end of the document, there’s a comprehensive list of all the work cited.

For in-text citation using this style, you italicize the poem’s title where it is a long poem or collection of poems. When the poem is a short poem and part of a complete work, you use quotation marks.

When citing a long piece of writing, write the author’s name, starting with the last name and the first name. After which, you write the poem title in italics, the city in which it was published, the publisher’s name, and the year published.

When citing a short poem that is a part of a collection or anthology, you also begin with the author’s last and first name. The next thing would be to write the short poem’s title in quotation marks, followed by the collection or anthology title in italics. After which, you add the editor, the city in which it was published, the publisher’s name, and the year published.

Do You Italicize A Poem Title In Chicago Style?

The Chicago style is a referencing style attributed to the University of Chicago Press. It counts as one of the common referencing styles in the United States. This style is also peculiar to disciplines such as social sciences, business, fine arts, history.

The Chicago style does not make any difference when you cite it in the write-up’s body. Whether it is a book, article, collection of poems, or short poem, the citation follows the same process.

An easy way to cite in the body of the writing piece via this style is to provide the author’s name and publication year in round paragraphs.

Poem Titles: What You Need To Know

The title of a poem is usually the first thing that the reader sees. Authors put the title on their book’s front cover, whether it is a long or stand-alone poem. For shorter poems, you will find them at the top.

In an actual sense, writing the poem’s title is usually more challenging than writing the poem itself. The writer would want to come up with a title that captures the reader’s interest. From the title, a reader should want to read the poem. A poor title could damage the acceptability of the poem, even when the content is excellent.

Irrespective of the style you are using in your writing, italics have rules which you must strictly follow. Firstly, italicize long pieces of writing and put short poems in quotation marks. Apart from these differences, the rule is the same across all styles.

In the world of notebooks, spiral notebooks never go out of style. Despite the existence of digital notebooks, END_OF_DOCUMENT_TOKEN_TO_BE_REPLACED

As an author or publisher, you’re accustomed to using the power of words to captivate your audience’s interest. END_OF_DOCUMENT_TOKEN_TO_BE_REPLACED

An electronic device that embraces portability and functionality, that’s what defines iPads in our world today. They’re a END_OF_DOCUMENT_TOKEN_TO_BE_REPLACED

If you’re looking for a cost-efficient solution for your print projects, you’d want to try publishing your content END_OF_DOCUMENT_TOKEN_TO_BE_REPLACED