If you are new to the piano, you may be wondering where even to begin. Or maybe you END_OF_DOCUMENT_TOKEN_TO_BE_REPLACED

Whether you are a beginner bass guitarist or an expert player, you likely recognize that you have much END_OF_DOCUMENT_TOKEN_TO_BE_REPLACED

If you are new to the ukulele, or you are a seasoned player who wants to take your END_OF_DOCUMENT_TOKEN_TO_BE_REPLACED

Did you recently purchase your first guitar? If you are picking up the instrument for the first time, END_OF_DOCUMENT_TOKEN_TO_BE_REPLACED

Killer Tips On How To Write A Science Fiction Novel 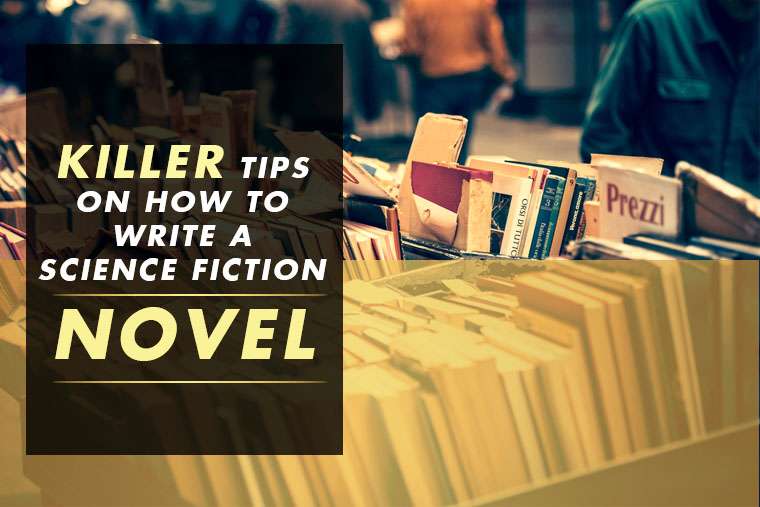 If you’re seeking tips on how to write a science fiction novel, you’re in the right place. Science fiction is centered on science. It helps us understand where science is heading.

Imagine a novel discussing time travel in the future. Even if it doesn’t happen in real life, having such tech advancement captured in a novel can help to open up our creative minds.

Writing science fiction is also quite interesting. But that depends on your knowledge of the niche, including how to present the story. All these will determine how your readers will perceive your story.

This post focuses on unraveling what wannabe fiction novel writers need to know to deliver a masterpiece. If that’s your aim too, read from start to finish.

What Is Science Fiction?

Science fiction is a genre of literature that illustrates how advances in science and technology, either real or imagined, bring about marked social and environmental changes.

Usually referred to as sci-fi for short, this genre takes on a speculative and futuristic approach while touching on a wide assortment of concepts, including but not limited to space, time travel, and aliens.

The entire story is based on established scientific principles, known and appreciated by everyone, with technicalities accurately expressed in hard sci-fi.

Soft sci-fi is not so keen on the technicalities. The projection of scientific concepts is sketchy at best. It focuses more on humanity and the people concerned. But the principles remain relatable and logical.

Humans are passionate beings. They love stories with a lot of intrigues. As a result, science fiction has a diverse audience that cuts across virtually every stratum of society. According to David Hawkins, the author of The Navigators and Paths of Duty and Honor, “Men, including women, and undefined; the young, old, and in between…all have an interest in where science is going, what is possible and impossible.”

Like every other genre, science fiction involves a lot of creativity and imagination, but in this case, it requires the application of concepts in science and technology.

This application may involve wild and crazy ideas. Still, the onus is on the writer to apply them in ways that appear plausible enough to his audience so that the element of intrigue is not lost.

Writing a science fiction novel can be challenging but is doable. All you need is basic scientific knowledge, a grand idea, a fascinating plot, interesting characters, and some discipline and determination.

Let’s discuss tips on how to write a science fiction novel.

Before you embark on the journey of writing a science fiction novel, there are unavoidable basics that one must consider.

The basic aspects of grammar, tenses, punctuation must be in order before you consider taking on any writing project.

Imagination is the key: Still focusing on the basics, the currency for every literary work is creativity and imagination. For science fiction, an imaginative mind is much more imperative. And an easy way you can do this is by thinking outside the box.

This may sound cliché, but it remains an ageless piece of wisdom. Find questions in the universe. Challenge perspectives. Ask what-ifs. Imagine the absurd. In science fiction, keep in mind that everything is possible.

This might sound not very comforting to a newbie, as science is as broad as the sky. A good place to start is to read high school science and physics texts or even Science for Dummies, available from different publishers. An online search will offer you a lot of options to choose from based on what interests you.

Read a lot of science fiction: This is as important as the other points raised above. Reading is an important part of writing. It is very helpful to read a lot of what you want to write.

Reading already published works, especially bestsellers, exposes you to the quality of writing that is minimally acceptable to readers and publishers alike. It gives you an insight into what is sellable to your audience and what is not. It also helps you identify your weaknesses and shows you how you can improve.

It would help if you watched sci-fi movies and shows. Also, watch science documentaries. They help to keep you up to speed with what’s obtainable in the world of science and science fiction.

Identify your grand idea: Science fiction is all about the big ideas. Although it may involve individual characters, each with their idiosyncrasies, the plot of science fiction usually has far-reaching effects, which may sometimes be universal.

The concept could be a virus that causes huge social and economic disruption or a piece of technology that threatens world peace and stability. The scientific concept may be simple, but the impact can be national or global. Always remember to state your goal in your grand idea.

Create a fascinating plot. The plot is a layout of the major events in your story. A plot is very important in literature and unveils the story’s central theme while linking the events therein. Although you may make changes to your plot as you progress in your project, the plot guides you and helps you maintain focus as you advance.

Some writers do not write the plot summary of a story before they embark on it. For science fiction, this is not advisable. This is because, for a work of art based on scientific concepts, it is important to keep your eyes on the goal of your grand idea.

Create the major conflict or problem in your plot. This is the main thrust of your story. For some, it may just be survival, as in a global pandemic or adaptation to a changing world. Highlight the threat or challenges posed by this problem. Decide how this problem will be solved.

Also, note that your characters must be believable. Once you have this important part checked out, your story is halfway done. In science fiction, your characters would involve beings such as scientists, doctors, spacemen, aliens, or even ordinary people who are trying to make sense of events via research, fact-finding, or investigation.

Now, you have your grand idea driven by a scientific concept. You have a fascinating plot. You have intriguing characters. It’s time to bring this idea to life and create a masterpiece. A few things are important to consider.

Decide your point of view: This is one of the major decisions to make for your novel, and it depends on your grand idea, including how you want to project it to your audience. A story told in first, second, and third-person points of view may have the same general concept, but they would not have the same ebb and flow.

Stick to a routine. This helps you make steady progress in your novel writing project. It would help if you had the discipline and determination to do this.

Plausibility is important: Fiction is make-believe. This can be tricky for science fiction writing that should be based on an actual concept. As much as you make your characters believable, it would help if you also made your story plausible for it to be appreciated by your audience. For instance, even if your setting is not an actual geographical location, your presentation must be relatable enough for your readers to flow with the story.

Maintain consistency in your logic or concept: It is very important. This not only makes your story plausible; it also helps to maintain the integrity of your main idea.

Keep your prose as simple as possible. Avoid complex terminologies and names, and where possible, always provide adequate alternatives.

Avoid too much science: This may sound contradictory, as science is usually the concept behind every science fiction novel. However, approach your science fiction without bogging your reader with all the complexities of the science behind your story. Remember that not everyone in your audience is a scientist. Some of them love intriguing and imaginative stories. So, science may be the concept, background, or foundation, but it should not be the story. The human side of it should be supreme.

Science fiction is a speculative and futuristic genre of literature based on a scientific concept, appreciated by readers across a wide range of social and demographic groups. Writing a science fiction novel can be a very daunting task.

However, once you have a big idea with a conflict or problem that requires a solution, build fascinating plots and characters around this conflict to create an intriguing read. Remember to avoid too much technical detail so as not to bore your audience. Keep your concepts logical, plausible, and consistent. This is to protect the integrity of your big idea and keep your readers intrigued.