What Does Realistic Fiction Mean? A Detailed Explanation 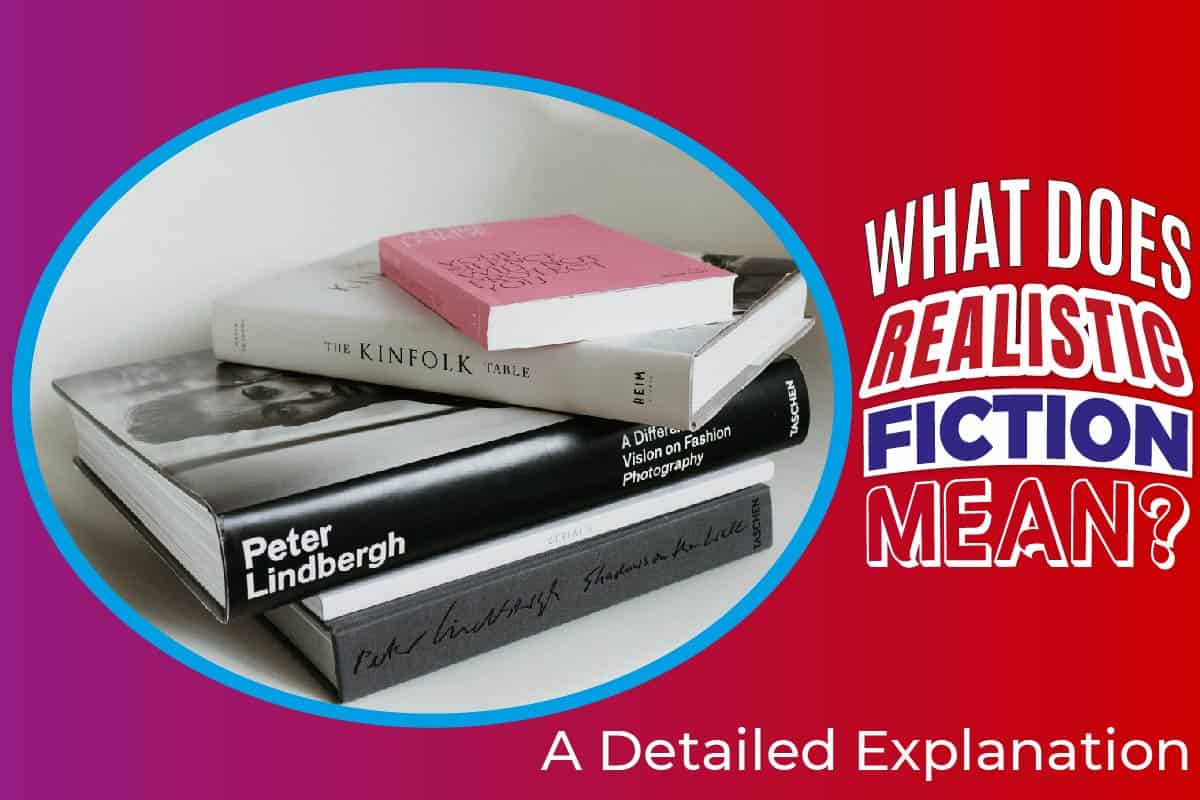 Realistic fiction is a branch of literature. Here, the writer is allowed to wow the readers with his or her creative, imaginative ability. The writer takes his readers in-depth to another world.

As expected, he creates peoples, gives lives, gives families and puts the characters in difficult situations or challenges, and gives ideas on how they can wriggle out of it. This is the power of realistic fiction.

In this article, you’ll understand the meaning of realistic fiction, elements, and more. Keep reading!

How Can Fiction Be Realistic?

If a story is fiction, we understand that it is not based on real-life events. We get that the characters, the plot, setting are not real.

But the phrase ‘realistic fiction’ makes one wonder how a story that is not real can be realistic.

You may be wondering what this realistic fiction is all about? If you want to find the answers to these questions, you should read on.

Realistic fiction is a genre of literature that portrays in stories real-life events that could happen.

Realistic fiction tends to bring contemporary events to appear as though they happened to people.

When you come across realistic fiction works, it would appear or sound like you can relate to that story or know some neighbor or friends who may have had such a situation before.

However, they are from the imagination of the writer. The people in the story, the character that they portray, seem to appear as the characters of real humans on earth today. The place where the story is set is not far-fetched.

Realistic fiction is not entirely a fabrication; they reveal truths about human endeavors. You can relate to them too.

Realistic fiction, like real-life events, talks about people, the challenges they may encounter, the conflict in their lives, including how they resolve them. Realistic fiction also covers issues that border on society.

This explains why when you read a book or see a movie, wherein the character and the story almost seem real, know that what you have right there is realistic fiction.

Like the other genres of literature, certain elements distinguish realistic fiction from them. Let us examine each of them.

The characters in realistic fiction have similar natural human qualities with their faults. And they are not some sort of superhumans or animals like in the fantasy genre of literature. The realistic fiction author clothes his characters with common human traits like love, hate, strong, weak, con, folly, prudence, laziness, diligence, and the likes.

The setting of realistic fiction combines place and time that supports the central idea of that story. The story could be set at a time of war, peace, economic boom, the slave trade, and the likes.

Whether it happened in the medieval era, the Greek era or at wartime, or some other time in history, all these draw the realistic fiction closer to being real.

The place of the realistic fiction could be in Los Angeles, Kansas City, or any of the places in the United States or the world in general. Some of these places could also be old and extinct.

Most importantly, they are places that we can easily believe to exist. It appears to us like the world, as we know it. We can readily believe these times and places, as they are within the purview of the human mind.

The writer of realistic fiction employs a great deal of his creative skill to describe the story’s setting vividly.

The theme of realistic fiction is not far-fetched; they border around issues that happen around us every day. It cuts across family issues like divorce, bareness, a prodigal child, poverty, fierce rivalry between the rich.

In the business world, it could be issues like the rise and fall of a business magnate, betrayal, forceful buyout of one’s fortune. It could also be about the issues surrounding the government of a state and the people: the oppression of the ruled.

The theme of realistic fiction tends to give us an honest overview, to a certain degree, of the issues of life. As a result, we are persuaded to see all the angles of life from the eyes of another.

In realistic fiction, the dialogue and language of the character truly reveal how humans behave and reason. The dialogue of each character depicts the inherent qualities of that character in a real-life situation.

This is the kind of diction used by the writer, more specifically, his choice of words and how these words flow in the body of the work.

Many types of fiction abound, like fantasy, historical, science, but we shall discuss the major ones.

Fantasy is one of the genres of literature. Like the word ‘fantasy,’ fantasy stories are very creative imaginations of the writer. Myths, folklores, fables often inspire it

In a world of imaginative literature, fantasy and realistic fiction are direct opposites. You may be wondering why I say so.

It usually portrays people and animals in a made-up fairyland. There is always a conflict for power between the good and bad forces, who always want to dominate and rule over all the others.

The stories usually sound too good to be true, so we honestly disbelieve them; because we know that what we read or see in those stories cannot happen in the real world. But this is not the same with realistic fiction.

These two genres of literature are similar. The underlying element in historical fiction is that though the story is imaginary, it resurrects past events and translates them into stories.

Historical fiction portrays facts about the time, place, and people that featured in that event.

Nonfiction, as a genre of literature, intends to tell only true and accurate facts. These facts can be translated into written or filmed stories.

The gist of nonfiction is that it presents only facts. The characters, settings, theme, conflict, and resolution are true life events that have happened sometime in the history of man. And then, it is retold in the form of a story.

The characters in nonfiction are made to bear the same name, quality, ideology as the true-life character that forms the center of the storyline. These characters speak and act exactly like the real character.

Is There A Divide Between Realistic Fiction And Nonfiction?

It is worthy to note – the fact remains that although a realistic fiction story has a similitude of truth, it births from the imagination of the writer.

The content of realistic fiction, unlike nonfiction, does not point to any real-life person or event, as the person around whom the story revolves.

More so, this fact is backed by the disclaimer in filmed realistic movies, that the story is entirely the literary idea of the writer, that any coincidence as to the character or person, names, or place in the movies are mere coincidence.

These children’s contemporary realistic fictions now wear an honest look of life, however, imaginary events that could happen. Children’s realistic fiction stories depict the world of children and the issues that they face.

These issues relate to their challenges, whether at home, at school, around the neighborhood. Their life also shows some form of happiness mixed with disappointment or sadness.

Do not be carried away by the thrilling storyline, the suspense, or the conflict. You can guess what will happen in the end. Of course, yes.

Sit back, and enjoy your movie or a good read. After all, the story is a mere imagination.

In the world of notebooks, spiral notebooks never go out of style. Despite the existence of digital notebooks, END_OF_DOCUMENT_TOKEN_TO_BE_REPLACED

As an author or publisher, you’re accustomed to using the power of words to captivate your audience’s interest. END_OF_DOCUMENT_TOKEN_TO_BE_REPLACED

An electronic device that embraces portability and functionality, that’s what defines iPads in our world today. They’re a END_OF_DOCUMENT_TOKEN_TO_BE_REPLACED

If you’re looking for a cost-efficient solution for your print projects, you’d want to try publishing your content END_OF_DOCUMENT_TOKEN_TO_BE_REPLACED