Differences Between Drama And Fiction: Read The Comparison 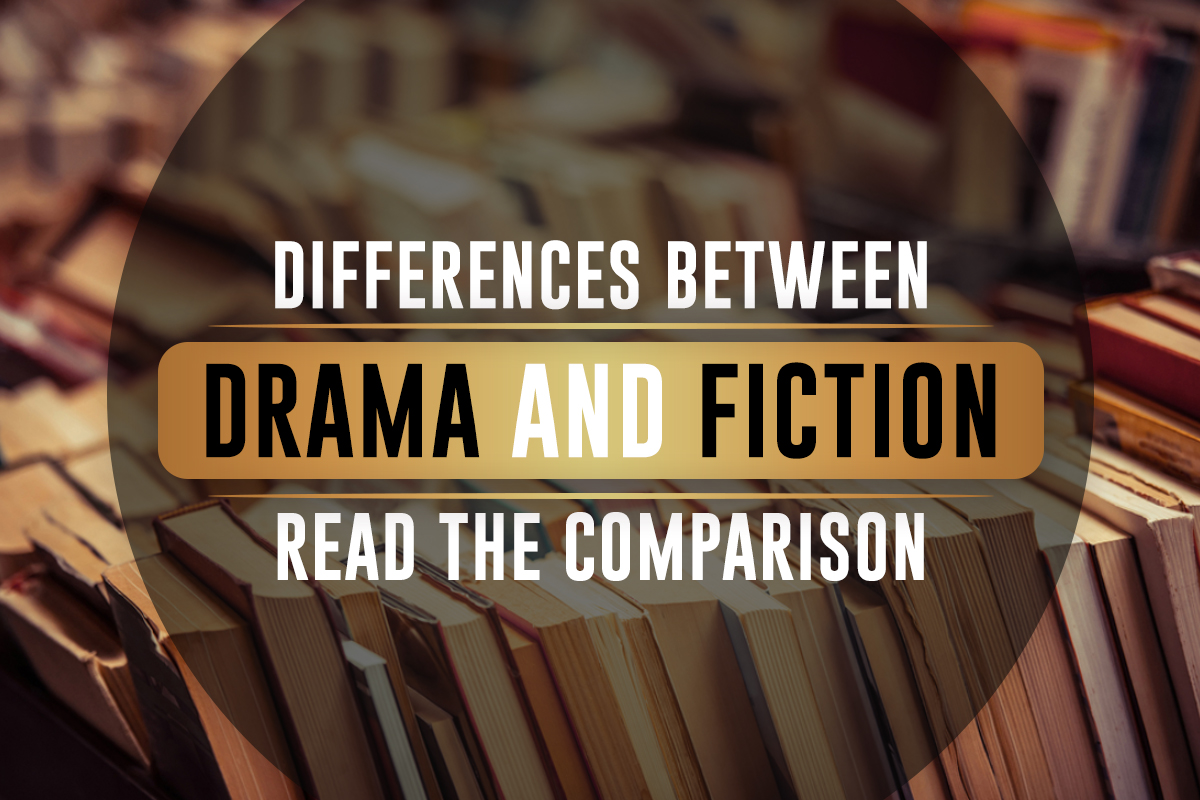 Literary works have a way of capturing our minds and quest for knowledge. There are a lot of them out there. So, we literarily can’t finish all. More and more are published daily. But all of these either appears under poetry, prose (fiction), or drama.

Even though drama and fiction are similar, they still have differences. So, whichever one you choose to write depends on what you want to achieve.

As you go through this article, you will understand fiction, drama, and their differences.

What Is The Difference Between Drama And Fiction?

A difference between fiction and drama is their medium of presentation. Fiction deals with imagination, so the audience interprets it from there. On the other hand, drama is visual. The audience can see it directly.

Additionally, fiction gives room for multiple interpretations because people imagine things differently. But drama is interpreted as is seen.

To further understand the difference between fiction and drama, you need to understand what they are, including the elements that separate them.

Drama is a literary work that you write and is performed for an audience. You write it as a script. Also, it involves music and dance. Some dramas are not performed but are read as a play.

This type of drama boasts a light tone, including a happy conclusion. It also makes people laugh. Comedy makes use of clever wordplay and addresses serious matters with humor. Sometimes, it consists of silly characters.

It consists of tragic events. Also, it doesn’t have a happy conclusion. Most times, the protagonist has a shocking or painful flaw. It contains dark themes such as poverty, death, and suffering. The protagonist or other likable characters may die or fail.

This type of drama creates excessive emotions to make the character more engaging. It may include romance or other events. The characters are usually heroes, villains, mentors, heroines, fairies, etc. Also, it contains a lot of fantasy. The ending can be happy or sad.

This drama comprises silly jokes and projects humor. It involves slapstick humor and usually an illogical storyline. Also, it contains crude humor that shows events that are not real or can’t occur.

It involves characters that tell the story through dance and music. It also contains dialogue and acting. The storyline has songs in between. Also, the characters often sing to show their feelings.

Fiction is a literary work that is from the imagination of the writer. It’s also entertaining to the audience. However, it can be a short story, a novella, or a novel.

It’s also known as contemporary fiction. It’s a plot-driven type of fiction. It also focuses on entertaining and helps the reader escape from reality. It doesn’t mean that it is less valuable. But it appeals to readers that prefer it. Furthermore, it’s more popular than literary fiction.

It is grouped into different parts:

This is a character-driven type of fiction but can still have a page-turning plot. It is a fictional story wherein every action affects the main character (s). It focuses more on human conditions like social or political issues. So, it is often said to be more severe than genre fiction. It may not have a satisfying ending. Sometimes, there’s no clear-cut line between the hero and villain.

You should know that some of these types of fiction overlap each other. So, a story can contain more than one type or subtype.

Similar Elements Between Drama And Fiction

It comprises events that make up a story or drama. Such events are connected. And as such, they develop as either the story or drama goes further. It is divided into several parts.

Exposition is the introduction of fiction or drama. It introduces the main characters through narrations or dialogue.

The rising action is the part in which the main character is facing a problem or conflict. The character then tries to overcome the conflicts. This phase shows how the protagonist deals with situations and his plight.

The climax is when the main character takes a big decision that’s a significant turning point for the story. How the character handles the decision determines the outcome of the story. A proper decision results in a later victory, or a wrong step that ends tragically.

Falling Action is when the story begins to round off. The results of the character’s decisions at the climax start to play out.

Resolution is the end of the conflicts. It might end unresolved, but it is the conclusion of the story. It may be a happy or tragic end.

This refers to a person, animal, or other beings that play a role in fiction or drama. They can be categorized based on their role. It includes protagonist, antagonist, foil, deuteragonist, confidante, and love interest.

Also, it can be categorized according to the character’s quality and nature within the story. It includes dynamic, static, stock, symbolic, and round.

It’s the meaning of a story. It’s also what the character learns at the end and the audience’s message from the story. For instance, a story’s theme can be how hatred can destroy a person’s life.

Furthermore, a theme may be major or minor. The central theme repeats throughout the story, while the minor theme shows up briefly.

is the where and when of the story. It shows the context of the story. It includes the time, place, and environment around the character in the story. Also, the setting of your story can affect your character, how they behave and interact.

It involves giving another meaning to a character or situation that is beyond the normal one. They are usually abstract. Sometimes, symbolism can conceal the real theme of a story, especially when it is controversial. It makes the audience reflect on what they see.

Also, they can be metaphors, allegories, myths, similes, or archetypes.

Differing Elements In Drama And Fiction

This is an element of drama centered on the costumes, scenery, special effects, and props in the drama. Fiction doesn’t have spectacle since it doesn’t require visual displays.

It refers to how the actors use words in the drama. The characters in drama speak and express themselves in dialogues. So the characters’ language and dialogue carry the plot on. It also defines the characters. Also, this element is not in fiction.

It gives a rhythm to the dialogues. Also, it adds sounds to the action and improves the way the audience feels the drama. It creates a flow of emotions in the drama. However, it may not be present in some drama. It is also not part of fiction.

In as much as there are differences between fiction and drama, there are also similarities. So you can transform fiction into a drama for presentation. You can also mix their elements when writing your story.

But be sure of the kind of audience you want to read your fiction or see your drama. It can help you structure your story correctly.

In the world of notebooks, spiral notebooks never go out of style. Despite the existence of digital notebooks, END_OF_DOCUMENT_TOKEN_TO_BE_REPLACED

As an author or publisher, you’re accustomed to using the power of words to captivate your audience’s interest. END_OF_DOCUMENT_TOKEN_TO_BE_REPLACED

An electronic device that embraces portability and functionality, that’s what defines iPads in our world today. They’re a END_OF_DOCUMENT_TOKEN_TO_BE_REPLACED

If you’re looking for a cost-efficient solution for your print projects, you’d want to try publishing your content END_OF_DOCUMENT_TOKEN_TO_BE_REPLACED