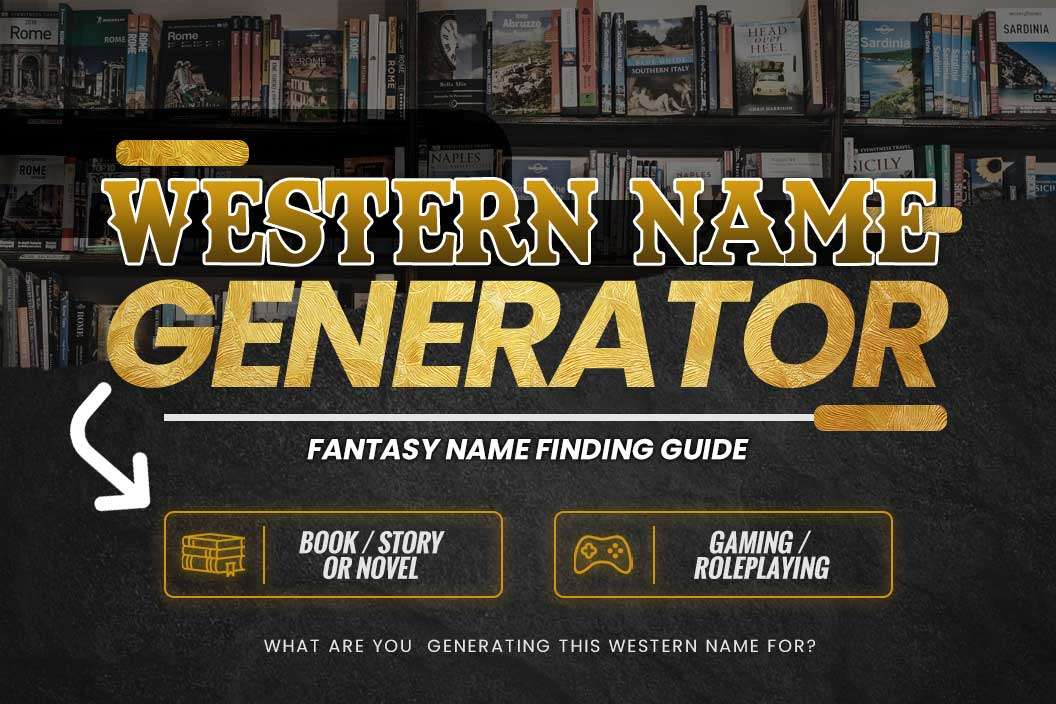 Most writers have problems creating characters with non-English names, but you could have the opposite problem. It is relatively easy for someone born and raised in the US to come up with western names, but this might not be the case for everyone. In this case, a name generator would be a great help in finding the best western names.

People that aren’t familiar with western culture could have a problem coming up with names or using western naming systems like a name generator. Such writers might need a nudge in the right direction to help them know what names to use, so let us get into the details;

This is something that most people will think is basic and we don’t need to look into, but it can be necessary for a writer. In a book, you need to be as culturally and historically accurate as possible to connect the readers and characters so let’s get into it;

When thinking of a name, a single name could quickly come to mind, like Michael, James, Jane, and so on, but there is more to western names than that. Let us break down the western naming system to understand all the parts of their names.

We will use a hypothetical person and call them John Smith as the subject for this lesson. John is the first name, and some people refer to it as a given name or forename. People don’t use forenames in conversation; it is mostly on forms.

It’s a given name because your parents give it to you. As a writer, this can be a fantastic tool to show what a character’s parents think about them. This is also the name that most people use in casual or informal conversations to appear more often in your story.

Most westerners are Christians, and they use biblically inspired names for their children. Such names include Mary, Jane, John, Samuel, Emmanuel, Paul, etc. After their christening, Christians will get these names and work as first names.

Christian names will only apply to Christians; if a member of a different religion gets a name in the bible, it won’t be a Christian name; it will be the first name like any other. Americans and most westerners are creative when it comes to picking the first name.

There are old names that have existed for hundreds of years, and people use them because they had famous users before. Others pass in the family, but most people have chosen to develop new names for their children in recent years.

In our example, smith is the surname, last name, or family name. In most cases, family members will share the last name, so you have Jane Smith and John Smith, whose father is Adam Smith.

This identifies members of a given family, and you can use it in formal conversations with abbreviations like Mr. and Mrs. Ie. Mr. Smith. The surname and first name are compulsory, and some people have only those; others have a third name, a middle name.

In the case of our example, his name would be John Andrew Smith, Andrew is his middle name, and in most writing, you use the middle name as an initial. This means you will write the name as John A. Smith.

The first and middle names often don’t relate to the family, but it differs between families. Some will use the names of older family members or the parents’ names with one different name.

Others have a senior and Junior system, which leads to the parents and children sharing names. A good example is Donald Trump and his son Donald Trump Junior. In this case, they have similar first and second names, but the suffix helps differentiate the two.

Some families use Regnal numbers in their names, especially royal families. These are ordinal numbers that help distinguish between members of the same extended family with the same name.

For instance, if John Smith was a king and his great-grandson also took the name, he would be John Smith II. You would read this as John Smith the second, and it shows the difference between the two people.

Factors To Consider When Choosing A Western Name

Picking the right name for your character can make the difference between your book tanking and becoming a bestseller. It would help if you had the correct confines when looking for a name to make sure you get the perfect one, so let us get into the factors;

If you already have some names, it will be easier to develop other names based on what you have. If you have two names for the father, you can use the surname as a family name; thus, it will be a second name for all the characters in that family.

You will only need to come up with the first names in such a situation, and the rest will follow the family line. This will be easy, but you can have problems coming up with first names; in this case, the family can also help you, the ancestors.

You can also use the middle name of characters to honor other characters. Often parents name their children to honor dead family members or other people in the community. You can do this in your story if you want your character to have a middle name.

2. The character’s past and intended future

You can give a character a name that their ancestor used to show what other characters think of them. This will also be leading to the reader; thus, it is a good choice as it will help them identify your character’s past.

One of the most considerable hardships of reading is following up all the characters, so using familiar names without contextual repetition will make the whole story easier to understand. As a writer, you know a character’s fate, and you can hint at it through the name.

You can reuse a name to show the purpose of someone in the past that your character shared. The past can be a great tool, especially with a rich background.

This seems obvious, and it is often the most important reason to think about when selecting a character’s name. You can use a name with a meaning or a name that relates to the reader in a specific manner.

For instance, if you read about Adolf’s character, your knowledge points you towards murder and evil because of Adolf Hitler. You can use names to reflect the appearance or personality; for instance, we expect Grace to be a beautiful, graceful person in the story.

Another way to do this is to use a nickname like Scarface to describe the character’s physical appearance and create an image of them in your reader’s mind. They could also get the nickname from someone they resemble in behavior either from the book or real life.

There are thousands of western names to work with, and the final choice will depend on you. It would be best if you did adequate research to help you come up with the names, so here are some ideas you can use for a start;

The setting of your story will determine how you name your character since the name must go with the setting. It should go with how other people speak since the name comes from society.

Their place will also determine the name. Kings and queens will have different names from peasants in a story. It would be misleading to give the king in a story the same name as a thief or peasant farmer since it will compare them.

We hope that the ideas for western names presented in this article will help and inspire you to create a masterpiece in your upcoming work. Also, consider using the western name generator for coming up with a great name for the characters on your next novel, play, or short story.

Also, try out our author tools like our 3d book mockup generator and our autobiography title generator.

In the world of notebooks, spiral notebooks never go out of style. Despite the existence of digital notebooks, END_OF_DOCUMENT_TOKEN_TO_BE_REPLACED

As an author or publisher, you’re accustomed to using the power of words to captivate your audience’s interest. END_OF_DOCUMENT_TOKEN_TO_BE_REPLACED

An electronic device that embraces portability and functionality, that’s what defines iPads in our world today. They’re a END_OF_DOCUMENT_TOKEN_TO_BE_REPLACED

If you’re looking for a cost-efficient solution for your print projects, you’d want to try publishing your content END_OF_DOCUMENT_TOKEN_TO_BE_REPLACED