If you are new to the piano, you may be wondering where even to begin. Or maybe you END_OF_DOCUMENT_TOKEN_TO_BE_REPLACED

Whether you are a beginner bass guitarist or an expert player, you likely recognize that you have much END_OF_DOCUMENT_TOKEN_TO_BE_REPLACED

If you are new to the ukulele, or you are a seasoned player who wants to take your END_OF_DOCUMENT_TOKEN_TO_BE_REPLACED

Did you recently purchase your first guitar? If you are picking up the instrument for the first time, END_OF_DOCUMENT_TOKEN_TO_BE_REPLACED

Is ADHD Real or Do We Not Really Understand? 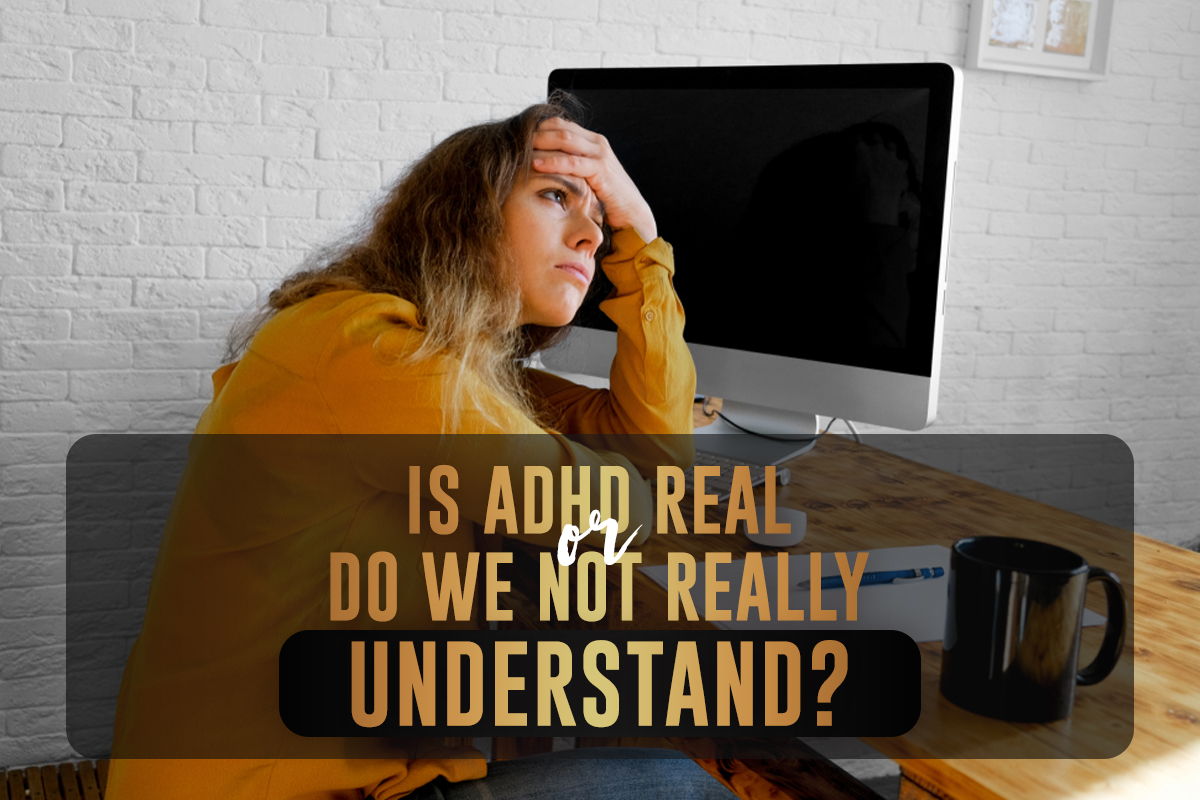 The question of whether ADHD is real or not has been a very controversial topic for many years. I will answer the question very succinctly to help clarify any misunderstandings.

ADHD is real and we do not really understand it. What is meant by that statement is that ADHD is a lot more complex than we typically think. So, when asking the question is ADHD real we are unknowingly bringing up a very complex and broad topic.

What is someone  trying  to ask when posing the question “is ADHD real”?

Unfortunately, sometimes what the questioner is getting at is an attempt to invalidate the experiences, challenges, and difficulties that somebody who has been labeled with ADHD has faced in their lifetime.

The intent behind this line of questioning has been greatly criticized on the Internet for making the lives of people struggling with ADHD even harder as they deal with people misunderstanding and not accepting their differences and challenges on a daily basis. I believe this to be a great disservice to people who have been labeled with ADHD, families and loved ones of people living with ADHD, and to professionals who help people with ADHD.

Now, with that said there may be another intent behind the question “is ADHD real?” that could be very supportive towards people with ADHD. Certainly if you asked any person struggling with ADHD they would say that it is indeed real, because their struggles are very real. What could be beneficial to people with ADHD is rephrasing the question from the point of view of do we fully understand what ADHD is?

In order to address these questions we have to look at and address what ADHD is and what does it mean for something to be real?

ADHD is a term that mental health professionals created based upon collective similarity of symptoms of individuals experiencing difficulty in their lives that affect their ability to function in society. The commonality of those symptoms are attention issues and sometimes hyperactivity. Therefore, mental health professionals coined the acronym attention deficit hyperactivity disorder.

Obviously, we did the latter. If we did the former with precision, then there would be no subsequent need for research into ADHD. Professionals would have a complete understanding of ADHD, because their definition of ADHD is equivalent to what ADHD is. Unfortunately, things are not nearly that simple or easy.

If we do not study the experiences, then we will only be dealing with the outside descriptive terms of ADHD. This will unfortunately only allow for surface level progress, and many more challenges for people who are having the experience of what were: ADHD.

One of the greatest to deservices that can be done to people label with ADHD is to be defined by a descriptor term without a thorough look into their inner experiences. A human being is far more complex and nuanced than what can be contained in a four letter acronym, and while diagnostics are useful-such simplistic terminology can lead to great misunderstandings.

So, in order to bring clarity to this issue we must state that the experiences of people struggling with what we call ADHD are real, and must be looked at very closely in order to bring true understanding. This is why I say that ADHD is real, but we don’t fully understand it. It is this gap between descriptive terminology and real human experience that affect the many who are suffering daily.

Imagine if you will that instead of spreading diagnostic definitions created by outside observers during awareness campaigns-that we instead spread real life stories of people’s daily experiences. Imagine the impact on people who do not have those experiences, and how they would be able to better understand what other people are going through by hearing those experiences and placing themselves in those experiences.

The greatest gift that anyone has to give to another is the recognition of their own lack of knowledge. Without this recognition there can be no sharing and no growth between peoples. There is a great deal that is not understood about what we call ADHD, and about all the areas of life that are affected by it.

A recognition of this lack of knowledge is the greatest service that we can give to those that are struggling with the experience of what we’re calling ADHD. It is through this recognition that true understanding can begin.

It is important that in the spirit of this recognition we address what is it that someone means when they ask whether something is real or not?

Determining reality is a very complicated topic that can go anywhere from neurobiology, quantum physics, philosophy, religion, cosmology. However, for the simplicity of this article I will assume that the questioner is looking to ascertain whether ADHD is a real medical disease.

In other words, people that are labeled with ADHD tend to have certain genetic markers and neurobiological indications. However, that does not mean that there is an ADHD gene or chemical in the body that can be tested. A representation of ADHD in that definitive way obfuscates the reality and makes it harder for people struggling with the experience of ADHD.

This is highly unfortunate thinking, and leads to a lot of difficulty for people labeled with ADHD as they try to explain their struggles to family, friends, peers, and employers. What is causing this misunderstanding is again the surface level thinking of you equating a descriptive term with someone’s inner experience. It is perhaps more precise to say that what people call ADHD is actually a set of conditions and relationships between biology, physiology, psychology, neurology, and all other bodily functions in addition to all other environmental factors that can affect a person. This broad look at ADHD is obviously extremely complex and not something that can be so easily understood, but without this nuanced understanding then all we really have is misunderstanding.

The attempt to equate someone’s experiences with the descriptive term that must be people to be chemically or genetically tested and be linearly and simplistically understood is the cause for so much misunderstanding and the controversy around the question “is ADHD real?”. This tendency to devalue human experience and replace it with outside observer terminology is something that is a pattern in our society, and has caused much more damage to those having certain marginalized experiences that we would all care to admit.

Unless our society can move past surface level definitions and simplistic contextualizations – we will not be able to truly help and serve. Without the recognition of lack of knowledge then all one has is their own perceptions. True understanding and true knowledge relies on the admission of ignorance, and the learning through others’ experiences. Without this we will not be able to look at the nuanced nature of reality, but rather our own conceptual projections of what we think reality is for not just ourselves, but for others as well.

The greatest service to any human being is done not through projection or conceptualization, but through the simple act of listening and really hearing with another is going through or experience. It is only through that listening that we may begin understand the details and nuances of another’s experience. Every person is different and has different experiences, however there may be certain similarities and commonalities that often overlap. It is just as important to focus on the unique experiences of individuals as it is to focus on the overlaps that they tend to share.

Just as there is no such thing as an average in real life- the overlap of certain similarities and common experiences is not a manifested real person. Rather, there are many different individuals with different experiences. In other words, there does not exist the average of 1.93 kids per family as there is no such thing in reality as 1.93 of a kid. In the same way, the overlaps of ADHD are not actually manifested in a real tangible person, but rather are part of many different persons with different experiences.

Getting to know many different people with different experiences is not an easy task. Even getting to know one person is very difficult, because of the complex nature and nuance of the human experience in the dynamics of life. However, without this sincere and honest attempt to fully value, validate, and understand another’s experiences, then there is unfortunately not much that can be learned. Furthermore, and most disheartening, without this knowledge there cannot be a very effective way for fellow human beings to help one another.

I hope that through this exploration of this question that you can see how useful it is if the questioner has the intent of asking do we really understand what ADHD is?

It is only when we can understand another’s experiences that we are in a position to help. In this way exploring this topic can be very useful and beneficial to people struggling with what is called ADHD, because it could bring true understanding through true listening to the experiences of others.

With true understanding and true listening comes true helping, and that would be the greatest service to not just people struggling with what is called ADHD, but to all human beings who are just trying to live life deal with its many challenges.

This article represents more of a calling for us to be more human and more compassionate to each other.  My hope is that instead of continuing a debate-we may rather seek to continue and deepen our humanity.