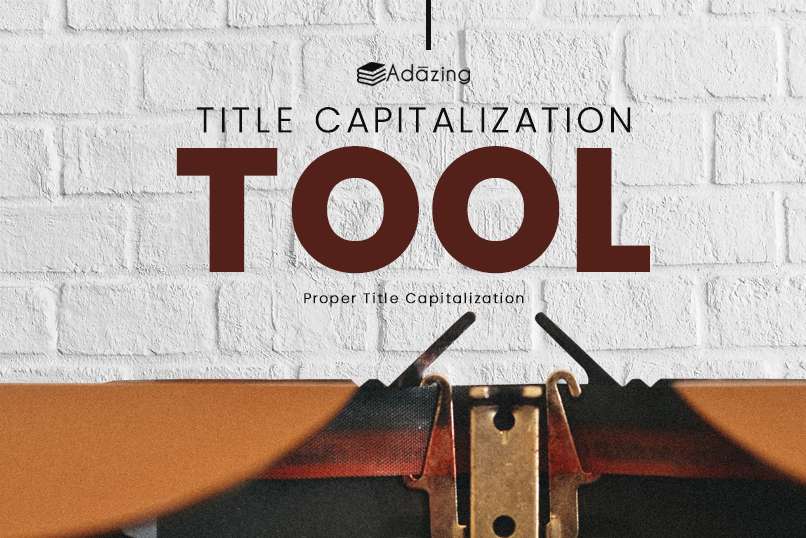 You think writing a title is the most natural part of writing a paper or a book, but you’re wrong. There are actually so many rules encompassing title capitalization, that it’s quite difficult to follow which guidelines to apply.

There is nothing more embarrassing than writing an article or posting the title of your book and having the capitalization incorrect. There are so many different capitalization methods that you can follow for article and book titles.

And with each one, it takes a lot of work to figure out precisely what should be capitalized and what shouldn’t. Even professional writers encounter this sometimes!

This is where our Title Capitalization Tool comes in.

If you have a professional article or book you are working on and have questions about whether that pesky “it,” “from,” “or,” and “a” should be capitalized, then search no further.

Once you add your title in the top box, you can then click “Fix My Title,” and your title will get converted according to standard American English title conventions more often referred to as “Title Case.”

No more memorizing countless grammar rules! And oh, did we mention that you can use our Title Capitalization for free? Go check it out!

Although not set in stone, these “rules” are simply guidelines for all writers who want to keep their writing professional and in uniform. Here are some tips to get you started.

As a writer, there is a universal title-writing guideline that everyone knows: capitalize the major words.

But what are these major words?

The way you write a title mostly depends on the style guide you’re using. The most common are The Chicago Manual of Style, the MLA Handbook, and The Associated Press Stylebook.

These guides have varying rules in writing, and you should first figure out which style guide you’re going to follow in order to keep all the parts of your paper or article consistent.

Title case is used mostly for titles, as well as headlines, headings, and subheadings. Here are some basic guidelines in title case outlined in the Chicago Manual of Style:

When we talk about major words, these are usually all adjectives, verbs, adverbs, nouns, and pronouns found in the title.

The Moment He Cried (pronoun)

A Tale of a Small Girl (adjective)

How to Slowly Succeed (adverb)

The first and last word should be capitalized as well, regardless if it’s not a noun or any part of speech.

All style guides follow this rule, not just the Chicago Manual of Style. So don’t be confused if your first word isn’t a verb, adverb, adjective, noun, or pronoun. It’s a no-brainer that you should capitalize it every time.

Example: How to Sit Correctly

This title capitalization rule commonly requires practice before you can master it. Although it’s said that words fewer than three letters should not be capitalized in a title, there are some exceptions to the rule.

After all, some verbs and nouns are fewer than three letters, and they still require capitalization.

Since there are only three articles in English (the, an, a), they are easy to identify and should always be written in lowercase– except, of course, if they are the first word in a title. S

The same rule goes to conjunctions, which are words used to connect sentences and to coordinate words and phrases in the same clause (or, for, but, no, and).

To give a little more context, let’s take a look at this example:

Example: A Woman and a Fugitive

A is used twice in this title, but it’s only capitalized once at the start since it appeared as the first word in the title. And is a conjunction, hence it’s typed in lowercase. Woman and Fugitive are both nouns, so they must be capitalized.

Prepositions, on the other hand, are quite challenging to recognize. They are words that link phrases and words like nouns to other parts of a sentence or a clause.

There are different kinds of prepositions, but let’s tackle two of the most commonly used in titles: Simple and Participle.

Simple prepositions are usually short and only contain one or two syllables. They point out logical, spatial, and temporal relationships between the other parts of the sentence and the object of the preposition.

Most common simple prepositions include: with, to, up, till, through, off, of, in, out, at, by for.

Participle prepositions, on the other hand, are verbs that act as a preposition. They do not link to nouns, and they can be easily identified because they usually end in -ing and -ed.

Most common participle prepositions include: during, regarding, concerning, considering.

Both participle and simple prepositions should always be written in lowercase in a title, regardless if the preposition is more than three letters.

However, there are times when prepositions act as adverbs, and as per rule number one, adverbs should always be capitalized. One way to determine if the preposition is used as an adverb is by figuring out whether the word that comes next is a noun or not.

If a noun follows the term you’re confused about, then it’s most likely a preposition. If not, then the term is most probably an adverb and must be capitalized.

Example: The Story of the Upper–Class

However, if you notice that the hyphenated compound in your title consists of a prefix that cannot work on its own, then the second word must not be capitalized. This title capitalization rule applies unless the second element is a proper adjective or a proper noun.

When a simple fraction or a spelled-out number is present in a title, always capitalize the two components.

Although scientific names are mostly mentioned in scientific journals or academic papers, it’s a handy tip to remember whenever you’re writing one yourself.

If you ever mention a scientific name of any species in your title, don’t capitalize the second portion. This guideline is commonly overlooked even by distinguished scientists, so make sure to double-check every time!

What Is Sentence Case in Title Capitalization?

Now that we have covered some of the basic rules in title case let’s move on to sentence case.

There are only a few rules when it comes to sentence case, as it is a form of title-writing where the heading is written just like you would a sentence. The regulations that cover sentence cases are mostly the same as those you would encounter when writing a normal sentence.

It’s considered more casual and laid-back and is used mostly by most online blogs and newspapers. Apparently, Europeans almost exclusively use sentence case in their writings.

In a sentence case, only the first word of the title is capitalized unless there’s a proper noun present.

Example: Top 5 things to do in Brazil

Another important rule in sentence case you should follow is about the first word in a colon. There are only two things to remember:

■ Capitalize the first word after a colon if it starts an independent clause.

Example: Passport to Asia: Fun things to do in Japan

Example: I know who she is: no one

You might notice that far more people and online content utilize sentence case in their titles, headings, and subheadings. Here are a few reasons why:

■ It breaks a reader’s flow whenever they see a capitalized word. Reading in sentence case doesn’t slow down the reader’s capacity to read and scan.

■ University and governmental institutions follow a “minimal capitalization” trend, which they also implement on the web.

■ You can be more consistent with sentence case.

■ You don’t have to worry about which word is considered “major.”

After all that, we’re pretty sure you’re already a title capitalization expert! However, it isn’t really necessary to be a stickler for these rules.

Just use our free title capitalization converter to produce a professional and clean-looking title every time!

In the world of notebooks, spiral notebooks never go out of style. Despite the existence of digital notebooks, END_OF_DOCUMENT_TOKEN_TO_BE_REPLACED

As an author or publisher, you’re accustomed to using the power of words to captivate your audience’s interest. END_OF_DOCUMENT_TOKEN_TO_BE_REPLACED

An electronic device that embraces portability and functionality, that’s what defines iPads in our world today. They’re a END_OF_DOCUMENT_TOKEN_TO_BE_REPLACED

If you’re looking for a cost-efficient solution for your print projects, you’d want to try publishing your content END_OF_DOCUMENT_TOKEN_TO_BE_REPLACED