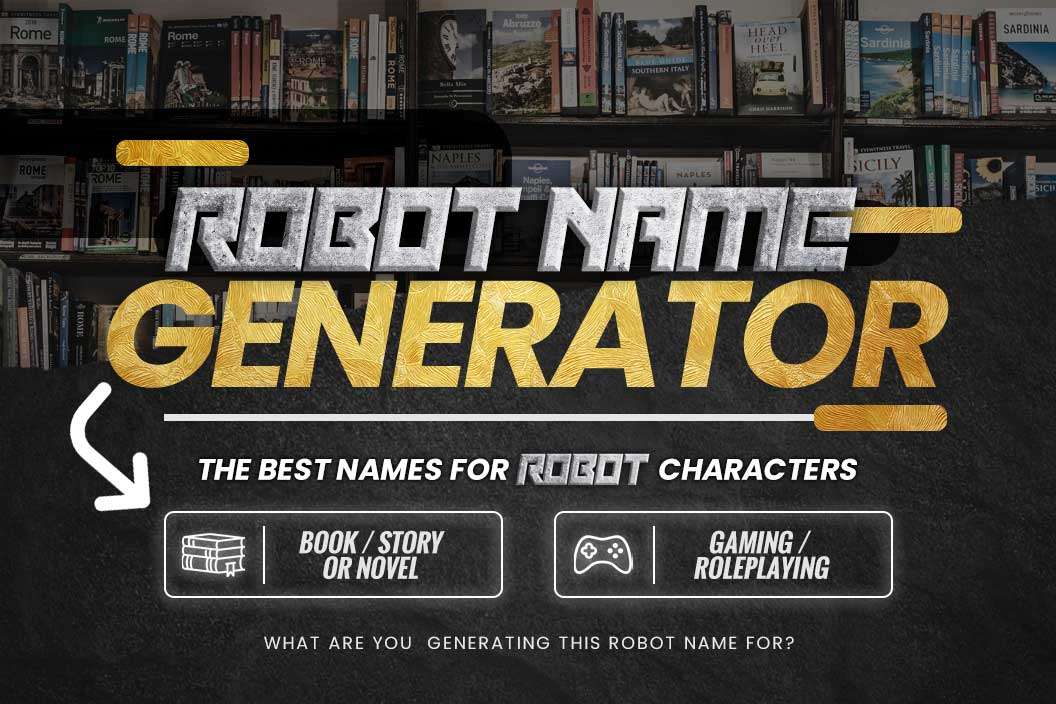 Writing might seem easy to an outsider, but only writers understand how hard it is to create an original piece.

Getting a story might seem like a big deal, but it is not the most challenging part of writing a story; getting names for your characters can prove challenging.

It would be best to name your characters appropriately to get to your readers. The evolution of technology has made robot stories increasingly popular, and you can make it big through them if you get the names right. Let us get into the details and help you pick one out;

Robots came to us as sci-fi content in movies, and now it is all around us, and they have been around for decades, changing form and evolving to get better.

The idea of robots in movies always suggests that they will turn on us and rule as they enslave humanity.

We currently use robots for space exploration to dock shuttles, clean our houses, and so much more to make our jobs easier.

These robots are a result of decades of research and study so let us get a better understanding of what a robot is and where they came from;

The basic definition of a robot is a machine engineers make to accomplish a unique task. All robots have a set of sensors for inputs to perceive commands. Once they get commands, they use control systems to weigh the environment and decide.

After weighing the choices, a robot will use an effector to make an output or complete a task, which sounds simple enough.

Laws of robotics did not come from an engineer or physicist; they came from an author, Isaac Asimov.

Mechanical robots come in many shapes and sizes to carry out their primary tasks. Robots have different functionalities, designs, and degrees of autonomy, but they all come up and perform complex tasks that humans can’t.

There are five types of robots in our world at the moment, and the chances are, your character will be one of these, so you need to know them.

Knowing your character will make it easier to give them a name since you will understand their purpose and story so let’s get into it;

These robots work in industries and other controlled situations to do simple, repetitive tasks. Such robots are often stationary, and they might be carrying heavy items from one station to the next or any other job.

A good example is a car assembly line with several pre-programmed robot arms. There are arms whose job is to insert an engine or weld a door on, and it does only one job. It does it for longer, more efficiently, and faster than a human would.

These are robots that resemble human appearance and behavior. These robots can do the same activities as humans, like running, carrying objects, and talking.

Most of the time, engineers design humanoid robots to look like us, even with human expressions and faces.

An excellent example of this is Sophia, a Hanson Industries robot that resembles a human in behavior.

These robots work independently without any human intervention, like the Roomba vacuum cleaner.

These robots are a good option for open tasks that don’t need a human supervisor or terrain too dangerous to have a human.

These are closer to humans since they have sensors that help them perceive their environment then use complex decision-making structures to take action.

These robots are semi-autonomous, meaning they can work independently, but they depend on humans most of the time. They use wireless communication systems that allow humans to control them safely.

These robots are common for use under hazardous conditions that put humans in danger. A good example is drones detecting landmines or repairing submarines that fix pipe leaks in the sea bed.

These robots can replace capabilities a human has lost or enhance those they still have. This is one of the fastest developing robotics’ fields, making science fiction real very soon.

These robots can redefine human capability since they make humans faster and more robust. Such robots are robotic prosthetic limbs and exoskeletons that help workers lift heavyweights.

How To Choose A Robot’s Name

Naming a character is not a simple matter, and it will get even more challenging if you don’t have clear criteria by which you will go about it.

Thanks to the existence of a tool like a robot name generator, you no longer have to struggle to come up with names.

Aside from that, there are a few simple facts you can use to guide you to the perfect name for your character so let’s get into it;

1. Inspiration from the story

The best place to get a name for your character is from the story. You need to look at your main human character if you have one or a critical point of your story and use it to come up with a name.

For example, if an engineer’s mother dies in your story, you could name the robot after her as a way of the creator appreciating the mother.

You could name it after an event or invoke a specific feeling that the reader will get based on your storyline.

If you have a robot character whose primary purpose is space exploration, you could name it Explorer or after a constellation like Orion. This would make it easier for a reader since the name will always suggest what the robot does.

Your robot’s appearance and demeanor can help you define a name. If the robot is calm and well-kept, you could name it accordingly to give off the feeling of calmness. A violent robot will also get a name that depicts its character.

You can also use a robot’s name to foreshadow what the robot is to accomplish at the end of your story.

You could twist a name like Xavier and use it to imply that the robot will save humans or something else at the end of the story.

Now that you have criteria for choosing a name for your robot character, it will no longer be difficult for you to create one. However, if you still need a bit of a help, you can use our Robot name generator. Also, here are some names you could use in your book, depending on how much they suit your character.

Naming a character can be challenging at times, even for expert writers, and you might need a nudge in the right direction. Sometimes it is best to look for a simple name that suggests what the robot is all about to make it easier on the reader.

A clever way to name your robots is to use acronyms that sound like real names. Some of the best names from movies result from the clever use of acronyms like SHIELD, so it can be an excellent point to start from.

However, you can also consider using our Robot name generator. It is a great tool, as it issues creative and practical suggestions. There’s no need to put yourself through the stress of coming up with names when the Robot name generator is here to help.

Also if you’re in for free author tools, see our 3d book cover software and our fantasy book generator.

Dr. Seuss’s books are known for their quirky characters, rhymes, and illustrations. However, the book covers are still END_OF_DOCUMENT_TOKEN_TO_BE_REPLACED

In a world bombarded with images and messages from all sides, it’s no wonder that book covers have END_OF_DOCUMENT_TOKEN_TO_BE_REPLACED

Funny novels are sometimes hard to write because humor differs from person to person. For a humorous book END_OF_DOCUMENT_TOKEN_TO_BE_REPLACED