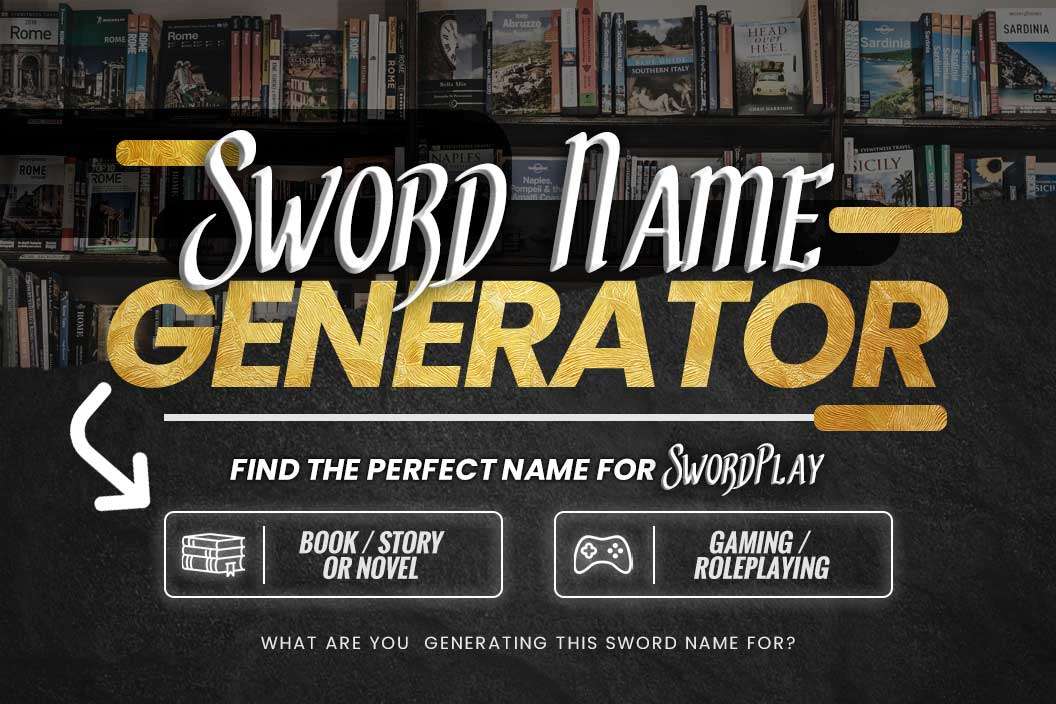 Swords have earned their place in the real world and, more so, the fantasy world. They have been used as weapons as well as a status symbol. Some have magical powers, and some are just generational heirlooms.

No matter the case, swords have been in existence since humans discovered copper and bronze. In fantasy writing, swords play a significant role.

That is true in historical fantasy books. They create an air of realism since they were weapons of choice in medieval times.

A sword name makes the story all the more intriguing and engaging. That is why The Sword Name Generator is of help in such instances. This amazing name generator frees you from the struggle of needing to come up with sword names on your own.

Swords have a long history. Some say they have traced their existence back to the copper and bronze age around 3300 BC. Humans were using sharpened rocks as weapons by this time, and they weren’t that long.

Copper and bronze made it possible for blades to be extended, creating the first generation of swords.

Although bronze made it easier to create swords, it was limited. Bronze was not strong enough to sustain a blade longer than 60cm.

It wasn’t until 1200 BC that iron swords became a thing. Iron was considered more robust than copper and bronze.

It was also readily available and could be melted and manipulated without much struggle. This age gave rise to the Roman, Persian, and Chinese Steel swords by 200 BC.

Medieval ages gave rise to stronger swords made from alloys, predominantly steel. Between the 5th century and 15th century, swords became much more refined and extended. They also came in different designs to improve efficacy.

However, this was to be the last glorious age of swords. In recent years they have been delegated to ceremonial duties at best.

Guns have taken over today as the weapons of choice. Although gunpowder had been in existence since the 11th century in China, it wasn’t until the middle ages that it became popular. Countries ditched swords in favor of guns as they started considering them crude and ineffective.

Historically there are dozens, if not hundreds, of sword types in existence today. There is no simple way to decrease this number or minimize them into a few categories. The article looks at some of the most famous swords in the world today.

As the name suggests, they refer to swords with longer blades. They were popular during the middle and renaissance ages. They include:

A katana is a type of sword most commonly associated with Japanese Samurai warriors. It’s a single-bladed sword with a sharp edge.

In their lifetimes, samurais only had one sword. It was considered a shame to lose one’s sword in a battle or war. They were eventually buried with their weapons.

That was a famous sword in Scandinavian countries. The Vikings that dwelt in northern Europe preferred this sword as it was double-edged.

The pointed tip delivered the desired blow, and the double edge made slashing easy. It was a prominent sword during the early medieval ages.

This type of sword was designed to look like an ace at the tip. It weighed more than most swords. That was an advantage and a disadvantage to the user. An advantage because it delivered the required blow to the opponent.

It would be a disadvantage because it would take time to deliver the blow because of the added weight.

Cutlass was a favorite sword among pirates. It was designed with a ring-like grip that reinforced stability and holds for the user. Pirates were not the only ones who favored this sword. The armed forces, particularly the navy, used this sword.

This type of sword is self-explanatory. It is held with two hands while in use. Any sword that was in this category is known as a two-handed sword.

That was a popular weapon in Germany at the end of the middle ages and during the renaissance. The name means ‘two-hander,’ and it is German.

That was a large sword used post-medieval ages. They were too large to be used in one hand as they were approximately 67 to 70 inches long. The large handle was for two-hand use as well as increased power.

That was another sword favored by the Japanese warrior known as a Ninja. Like the Katana, it is a single-edged sword that works best with two-hand use.

There are several mythical and legendary swords known today. They originate from different cultures and religions. Some of them include:

According to the Greeks, this was the sword that killed Medusa. Medusa was a monstrous being known for having snakes for hair and wings. Legend has it wielded by Kronos, Zeus, and Perseus. Zeus, the son of Perseus, used the sickle-like sword to kill Medusa.

If there is a famous sword, then Excalibur takes the cake. This sword is famously related to King Arthur. Geoffrey of Monmouth tells the most popular version of how King Arthur came to wield this sword.

Authur pulled the Excalibur from a stone when no one else in the kingdom could. He later led the British to victory against the Anglo Saxons.

That is a legendary sword of Indian origin. It is more myth than fact as it dates back to before creation. It speaks of a war between good and evil.

In a nutshell, evil was winning, so the gods on the excellent side sought help from a higher being who created a powerful animal after making sacrifices.

This animal transformed into a sword that helped the gods overthrow evil. This sword is known as Asi.

Much like Excalibur, this Icelandic story tells of a man who pulled out a sword where none could. In this case, a renowned warrior known as Sigmund had an encounter with Odin at his sister’s wedding.

Odin thrust a sword inside a tree and said whoever could withdraw it wilded the most powerful weapon known to man. Sigmund was the only person who could and went on to win many battles with the sword.

This sword is related to a legendary figure known as Susano-o. He was a god who, out of jealousy of his sister, committed acts that led him to be excommunicated from the kingdom.

As he wandered outside the kingdom, he met a couple who asked for his help in killing an eight-headed monster that wanted their only child.

He agreed to help and eventually killed it through a series of traps laid for it. The sword he used is known as Ame-no-Habakiri.

Fantasy writing that includes swords would be much more intriguing with sword names. Swords play a significant role in historical and modern-day fantasy.

There are a lot of sword names, and the sword name generator will help you get the best. Still, here are some sword names to include in the next bestseller.

Caliburn is a fascinating name with roots in Celtic culture. It is the sword that King Arthur surrendered. It translates to “Sword in the Stone.”

This sword’s name originated from the Irish. It is believed to be a sword that the gods made. This sword was designed explicitly for the first Irish king. It generally means the response or avenger.

According to legend, this was a very precious sword for Northern Europe. It belonged to a renowned king of Danish origin. His name was Hrolf Kraki.

This sword has its origins in Indian culture. It is believed that the word was a token from a Hindu god known as Shiva.

He gifted Ravana. Shiva, the Hindu god of death and time, is a Hindu deity. The sword is also said to be impregnable to destruction.

This sword originated from the Welsh. It is also known as the white hilt. Legend describes it as belonging to a man known as Rhydderch Hael. He was considered one of the most generous men in Britain.

This sword has its origin in Norse culture. It is considered a cursed sword. The tale described the sword as designed and made by dwarfs, and its name means Dainn’s legacy.

If you are looking for something of Chinese origin, then consider this name. It stems from a Chinese swordsmith and his spouse.

The swords were named after the two to honor them. The general meaning of the name is a river in the South East of China.

The Songs of Roland is poverty traced back to the 11th century. According to folktales, this sword was described in this poetry as one used in the Battle of Roncevaux Pass. It belonged to a person named Turpin.

That is a case of fire fighting. Legend describes Balisarda as a magical sword explicitly made to fight magical beings and objects. It is derived from an Italian poem.

Coming up with sword names can be difficult, especially if unfamiliar with the weapon’s history. That is why the Sword Name Generator plays an important role. As a fantasy writer, you cannot afford to leave out swordplay.

Make your writing intriguing by including sword names so don’t hesitate to try our Sword name generator. In the meantime, use the list of names in this article and entertain your readers.

Dr. Seuss’s books are known for their quirky characters, rhymes, and illustrations. However, the book covers are still END_OF_DOCUMENT_TOKEN_TO_BE_REPLACED

In a world bombarded with images and messages from all sides, it’s no wonder that book covers have END_OF_DOCUMENT_TOKEN_TO_BE_REPLACED

Funny novels are sometimes hard to write because humor differs from person to person. For a humorous book END_OF_DOCUMENT_TOKEN_TO_BE_REPLACED