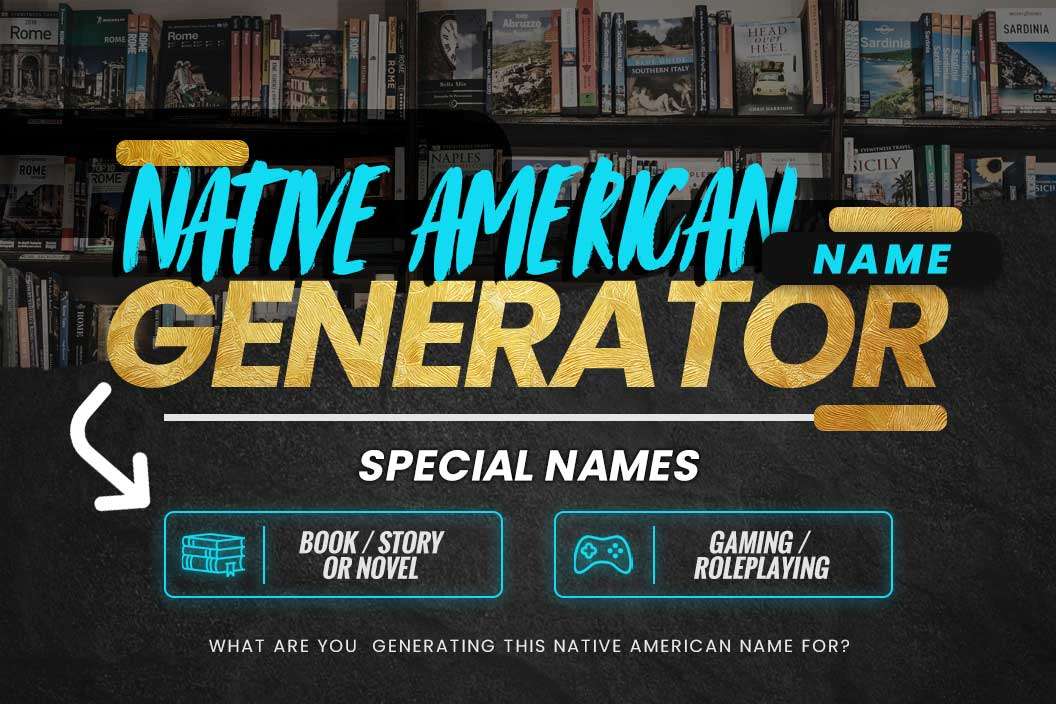 Finding the perfect names for your characters can be tricky for any fictional writer. The weight of this responsibility usually paralyzes many writers.

Honestly, nobody wants to saddle their characters with pedestrian, common names. Choosing the right name helps you explore your character’s personality.

It also helps the reader to identify different characters quickly. Again, being too creative on the name choices can confuse or distract your readers.

It has 1000+ name options, which are unique and will help the reader remember the large cast by offering a shorthand reminder of their identities.

Constitutionally, the American federal government recognizes 574 tribes, and half are associated with the Indian reservations.

According to records, the living Native American ancestors did arrive in the United States approximately 15,000 years ago.

They came from Asia through Beringia. With their arrival, America got a wide variety of people, cultures, and societies.

However, the colonization of Americans by Europeans saw a reduction in the number of Native Americans numbers. It was due to wars, enslavement, diseases, and ethnic cleansing.

A group of people had already discovered the beautiful American land several years before the arrival of the famous voyager Christopher Columbus.

They were the modern-day Native American ancestors. In fact, in the 15th AD, when European adventurers reached America, its inhabitants were more than 50 million.

Ten million of the population inhabited what is now known as the United States of America. With time, these Native Americans did move east and south, slowly adapting.

Here are some cultural areas; each area has similar characteristics and habitats.

The Arctic was the home to Aleut and Inuit, and both groups speak the Eskimo-Aleut language. The arctic climate makes its landscape sterile, and thus it has a small and scattered population.

The Arctic northern part has the Inuit, who were nomads. The animals they hunted were seals, polar bears, etc.

The Arctic southern part had the Aleuts, and they were more settled. Aleuts did live in small fishing villages located at the shore. Inuit and Aleut housing had notable similarities; they were dome-shaped.

Their houses’ primary materials were timber and sod. Inuit and Aleut did use otter and sealskin to make weatherproof and warm clothes.

They also made open fishing boats (kayaks) using these skins, in Inuit’s refer to it as kayaks, while in Aleut, it’s baidarkas.

The place has swampy forests (taiga), is swampy, and has waterlogged tundra. The subarctic region stretches across much inland of Canada and Alaska.

Traveling in this region is quite challenging; the popular means of transport here are snowshoes, sleds, and lightweight canoes.

People in the subarctic do not live in large permanent settlements. Instead, they live in lean-tos, small and easy-to-move tents.

It’s among the Native American regions that sustained contact with Europeans. The region stretches from the Atlantic coast of the previous day Canada, to North Carolina.

The inhabitants are from two main groups. The first group is Iroquoian speakers, and their people lived in politically stable villages. The villages were along inland lakes and rivers.

The other group is the Algonquian speakers. They did live in small fishing and farming villages located along the ocean. They were cultivators and grew crops like vegetables, corn, beans, etc.

The conflict was widespread in this region, and it became more complicated with European arrival. The Iroquoian group tends to be warlike and somewhat aggressive.

The place is in the northern Gulf of Mexico and is fertile and great for agriculture. The southeast natives were farmers and cultivated tobacco, squash, beans, etc.

The tribes living in this place are five and are usually called the Five Civilized Tribes. When the United States got its independence, the southeast region lost many native people. It was due to displacement and independence.

The region is vast, with prairie between the Rocky Mountains and the Mississippi River. The settlers of the plains were speakers of Algonquian, Athabaskan, and many more languages.

They were farmers and hunters. But after contacts with European settlers, incredibly Spanish specialists who introduced horses to the region, the Great Plains people became more nomadic.

The Native Americans have hugely shaped the history of the United States. This group is deep into the social fabric of American life.

According to scholars, to understand the American history and experience better, you must include the Native Americans (American Indians).

Here are some of the most famous Native Americans that played a crucial in United States history.

A Native American name will offer insight into the person’s personality that possesses it. Here are the examples from the famous Native Americans mentioned above.

Indeed, each name fulfills its purpose of revealing some extra information about the person’s character, place, or temperament.

Such names are still prevalent in America, and some individuals get more than one, which shows that they have significant character changes in their lifetime.

They give legal names, but one has to earn the Native American name.

Among the Native Americans, to trace one’s family history, people look at the surname and possibly its origin for clues. However, the different cultures have different naming conventions apart from a few.

If it comes to Native American descent, you’ll have to search deeper because Native Americans don’t have surnames. The American Indian culture valued names because they had deep power and significance in the past.

In addition to being clan names, they were pretty unique, and tribe members identified with them. The native Americans did choose names according to the bearer’s qualities.

Several Native American families still follow the naming traditions, but others have surnames from other parts of the world.

Many English speakers did have difficulties pronouncing the letters in the complicated traditional American Indian names.

Other Native Americans changed their last names to English for government records. But some kept both traditional names plus their anglicized names.

Some of the new surnames were traditional European names, while others were English words representing places specific tribes refer to as home.

Some names did describe the painstaking work of the native who adopted it, such as corn and maize pickers.

Regardless of the tribe, there are many Indian Americans with anglicized surnames. Here are some popular Native American surnames not in their native language.

Today many Native Americans still keep their names in their native language. The federal government has anglicized some names for records.

Regardless, each name that a family or individual bear reflect their journeys, ancestors, struggles, and traditions. Several notable Native American names will perfectly fit your characters.

However, if you have trouble finding them, you can check out the fantastic Native American name generator. It has more than 1000+ name ideas.

We hope that you’ll consider using our Native American name generator in your upcoming novel or short stories. For more random name generators, check out our collection of Fiction Name Generators here.

Also, try out our generators for free 3d eBook cover or titles for a book.

In the world of notebooks, spiral notebooks never go out of style. Despite the existence of digital notebooks, END_OF_DOCUMENT_TOKEN_TO_BE_REPLACED

As an author or publisher, you’re accustomed to using the power of words to captivate your audience’s interest. END_OF_DOCUMENT_TOKEN_TO_BE_REPLACED

An electronic device that embraces portability and functionality, that’s what defines iPads in our world today. They’re a END_OF_DOCUMENT_TOKEN_TO_BE_REPLACED

If you’re looking for a cost-efficient solution for your print projects, you’d want to try publishing your content END_OF_DOCUMENT_TOKEN_TO_BE_REPLACED