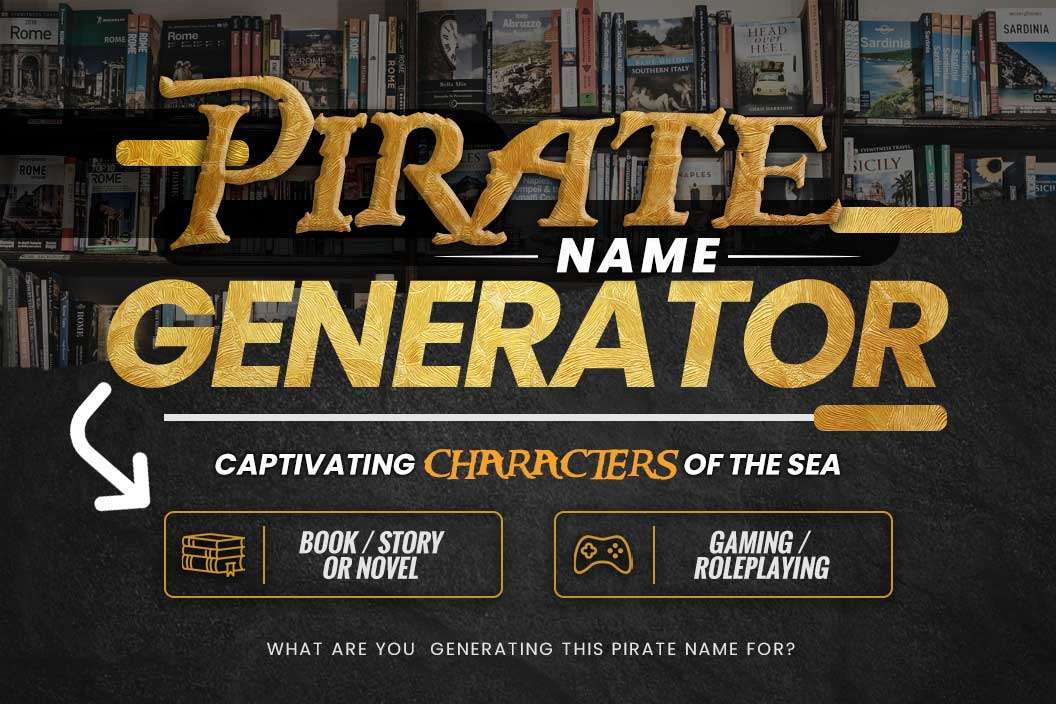 If the Pirates of the Caribbean movies proved anything, people would love a good pirate movie, and what is a movie if not a story with moving pictures? Writing a pirate story gives you a lot of freedom in ideas to use, and you can make an incredible story if you do it right.

There is a rich history of pirates from which you can draw inspiration and hundreds of myths from the sea to give your plot the twists it needs to captivate. Pirate name generator comes handy when naming your pirate character.

With the Pirate Name Generator, you get access to thousands of brilliant name suggestions. The tool will make your work exciting and keep the readers excited and willing to follow the plot.

Even with all these options, you need good names for your characters to help you connect with readers so let’s get into it;

The History Of Pirates

As mentioned, pirates had a rich history, and learning their origin and past can help you develop a more historically accurate depiction. Humans always had an enormous fascination for the seas, and they invented ships to help them satisfy this curiosity.

As they learned how to navigate, they explored new places and were able to take part in new forms of commerce. More boats were out at sea carrying trade goods like precious metals, spices, animal products, etc.

Merchant ships had highly precious cargo, and they became an envy for other sailors. These sailors organized in groups to attack the ships and take the cargo, and the fearsome thieves at sea became known as pirates.

The pirate activity started as early as the Bronze Age, but its documentation became more regular in ancient Greece. Pirates were a threat in the Aegean Sea, where they attacked ships from Turkey, Greece, and Egypt.

As the years progressed, pirates continued to perfect their skills, and they got more successful because of it, and piracy became a very lucrative way of life. During the Viking error, a new wave of terror emerged for the westerners.

Vikings were pirates that worked both at sea and on dry land; they would attack ships or come to the coasts and attack trading towns and cities. Eventually, the Chinese would invent black powder, creating more devastating weapons that worked at a more extended range.

Iron cannons were such weapons, and they could fire heavy metal balls from a distance, which brought about the golden age of piracy. By 1650, most European countries wanted control of the seas, and this struggle led to several wars.

Europeans were also looking for new colonies that would serve as ports to help them expand their control. Ships often fought and destroyed each other at sea, and amid all the chaos were the pirates that took advantage of the unrest.

Most of them navigated the trade routes along the Caribbean Sea since it was full of ships to rob and islands to replenish supplies. The Caribbean Sea was perfect to ambush ships and escaped capture if they needed to.

They used islands like Madagascar and Jamaica as ports, and they even had small towns with brothels, taverns, and trading posts. Mostly pirates attacked easy targets and forced them to surrender, thus ensuring they didn’t waste ammunition or damage the loot.

Pirates would sometimes engage in brutal hand-to-hand combat since they preferred death over capture. The threat of Pirates became a concern, and Governments hired corsairs to hunt down and kill pirates in the seas; some pirates even changed sides.

One of the biggest fears for a pirate was getting injured since doctors were scarce. Injuries to the leg or arm would lead to amputations hence the stereotype about hooked hands and wooden legs. Pirates often used cutlasses and flintlock pistols for their fights.

Pirates also had Jolly Rogers, black flags with depictions of swords on them as identification for their ships. They used the eye patch to keep one of the eyes rested as they moved between the dark ship and sunny deck, so they suffered less from the changes in brightness.

The ships’ captains were responsible for choosing navigational routes and targets, keeping most of the loot. Pirates had a code of conduct and responsibilities towards other pirates and the crew of their ship.

How To Choose A Pirate Name

Choosing an appropriate name for your characters can be difficult, especially if you have many of them. To make the process easier, you need criteria to follow to the perfect name which your readers can connect with so let us get into the criteria for pirate names;

When writing, you always have to keep your readers in your mind first and foremost. The type of names you use will depend on the purpose of your book. If you intend for it to be a children’s book, you need to look at friendly names.

This factor will not limit most names, but you should try to give acceptable names to society when dealing with children. It would help if you also made it simple and easy to follow, so avoid long, complicated names.

Pirates were terrifying, and you can depict how other characters see them, but it’s best to avoid too viciously descriptive names if you are writing a children’s book. If the story is for adults, you will have more freedom with names, and you can go dark if you need to.

Pirates have happened and controlled the sea for a long time in human history; thus, you need to know when your story will be and the names appropriate to that time. Pirates fought different people throughout their history; thus, they differed in adventures.

The difference in adventures is crucial since most pirates got their names from their actions and the people they stole from. Placing your character correctly in history will make it easier to name them appropriately.

Another source for pirate names is the crew or other pirates who know your character’s deeds. Knowing the crew’s origin will help you figure out some potential nicknames they could have had for a fellow pirate or their captain.

Old age pirates did not have access to the technology we have, so they depended on names that described a person’s behavior or physical appearance. A good example in history is Captain Blackbeard, who had a black beard, and it identified him.

An example in modern-day works is Peter Pan’s Captain Hook, who had a hook for a hand. A simple name such as Scarface or Redbeard can be all you need to keep your readers in the correct mental space to understand your character.

4. Their role on the ship

Pirates had specific tasks, and in most stories, the captain is the main subject of the story, but this might not be the case in your story. If you choose to go a different way, you can name a minor character on the ship and play an essential role in the future.

The name can be simple for a captain and imply a leadership position. You could give them any name provided you have the prefix Captain before it. A name like Blade could be perfect for a pirate that is good at fighting using the saber.

Getting names could be tricky, and sometimes, all you need is a nudge in the right direction to help you figure out the rest. If you are looking for ideas for a pirate name, here are some thoughts you ought to consider or use to get your own;

Pirates are a big part of our history, and they can be a fantastic source of a story if you use their stories correctly. Should you choose to write a pirate story, ensure you get the correct name for the ship and her crew. There’s no need to put yourself through the stress of coming up with names when the Pirate Name Generator is here to help.

The proper name will set the right mood for the readers, and your character will make the impact you expect them to make in your story. Always keep your readers in mind to avoid using inappropriate names or language. You can trust the Pirate name generator as the name created by this tool are carefully chosen.

We hope that you will enjoy using the Pirate name generator and that you’ll be inspired to create a masterpiece in your upcoming novel, play, or short story.

Also, save time and money with our online builders for a free eBook cover or good book titles.

What makes a book cover cool? Although there’s no definitive answer to this question, a few factors might END_OF_DOCUMENT_TOKEN_TO_BE_REPLACED

Creating book covers is an essential part of the publishing process, and a lot of thought goes into END_OF_DOCUMENT_TOKEN_TO_BE_REPLACED

Think about it – when browsing through a bookstore or online, what makes you pick up a book? END_OF_DOCUMENT_TOKEN_TO_BE_REPLACED