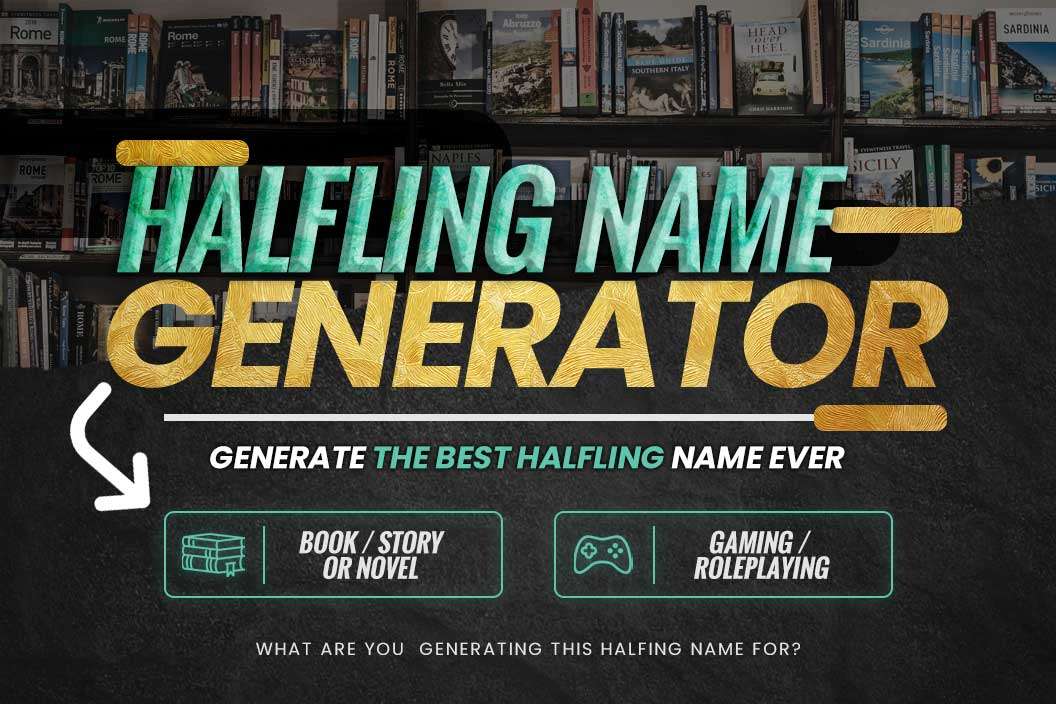 One of the essential things when creating a character is the name. Giving your character a name that fits its personality can add to the overall experience and make people more invested in your story.

Halflings have appeared in many fantasy settings over the years and have inspired a litany of characters.

You’ll find plenty of inspiration in this Halfling name generator, and you should be able to find something that fits your halfling character perfectly.

With the Halfling name generator, you get access to a lot of brilliant halfling name suggestions. It is a great tool as it provides excellent and valuable recommendations.

This article will provide several halfling traits and characteristics you might include in your fantasy writing.

Halflings are a race of small humanoids that commonly live with or near humans. The legend tells that the first halflings were created by mixing human and elf blood.

Halflings reach adulthood at age 20 and live up to 150 years. They are known for their short stature, keen senses, and cunning nature.

They are often portrayed as being close to nature and are excellent in farming and gardening. Halflings are generally not very intimidating and often appear childlike. They are capable of great endurance but not over prolonged periods.

Halflings are short and slight of build, rarely reaching over four feet. They are only about 3 ft tall or so when fully grown. Their average weight is about 40pounds. Their teeth are long, sharp, and pointed.

Halflings have big feet covered in thick fur throughout the year and therefore don’t need shoes.

Sometimes called “long ears,” halflings have large, round ears that can move independently of each other. These flexible ears help them move about undetected.

Their coloration is lighter than that of other humans, ranging from tan to pale brown, with some halflings even taking on a somewhat greenish tinge.

Hair color ranges through the usual human spectrum, but it is most commonly a shade of brown(sandy brown)or blonde and is usually curly or wavy. Some halfling men have long sideburns but rarely beards and mustaches.

Halflings have large eyes that often appear to be very expressive. They are either brown or hazel eyes.

Halflings have an angular, somewhat feral appearance accentuated by their thin bodies and loose-fitting clothes. Their clothing is practical and straightforward but tends to favor bright colors.

They are physically frail but have great agility and speed; they can move over the land with relative ease. They have adapted to survive within the dangerous environment of the wilderness.

Halflings are known for their bravery and courage. Other races often look down upon them because they’re smaller than most people, but they make up for it with determination and indomitable spirit.

When a halfling sets its mind on something, there’s nothing that can stop them from achieving it.

Halflings do not shy away from a fight and will gladly put their lives on the line to protect their loved ones or their way of life.

Halflings are typically good-natured and friendly, but they’re also very protective of their space and privacy.

They are also willing to stand up for what they believe in. They hate to see others in pain and have no tolerance for oppression.

Halflings are a playful, cheerful race; they love food, drinks, and family. They often find pleasure in simple things. They are also known for their love of ale, song, and dance.

Curious to a fault, halflings love to delve into matters that interest them, with an insatiable desire to know more about the world around them and their place.

They enjoy learning for the sake of learning and are not afraid to tackle problems too tricky for more prominent folk. With a natural curiosity, some halfling folk tends to be wanderers.

Halflings are great at finding ways to get what they need when there are low resources. Their curiosity leads them to explore every nook and cranny, always looking for valuable items that can be repurposed or recycled.

This has helped them survive in the wilds since before recorded history.

Halflings are a race that enjoys collecting and hoarding things. They have an unyielding passion for holding onto things they find personally meaningful.

They especially love to hold onto possessions that they have won through their skill. However, halflings will often hide their wealth rather than put it on display.

Lightfoots are the most common and live in forested areas. Lightfoot halflings are one of the most nomadic races. They move around constantly, from the borders of the great forest to the shores of the sea.

Halflings from the planet Anadia are born with an extreme range of emotions, more potent than any other race. They are also very short and possess a perfectly balanced body.

Anadian humans come in different skin tones, but they all have dark thick hair and a dark complexion. The average height of an Anadian is 3 feet tall and 33 pounds which makes them one of the shortest races.

The ghostwise halflings are a reclusive strain of the halfling race who live in the woodlands. This race is the rarest race among halflings. They are most at home in the trees, building their homes amongst the branches.

Ghostwise halflings often have lighter skin than normal halflings, and their hair can be silver-white to pale golden blonde. They have large, light blue eyes and prefer clothing that features earth tones and greens.

They can communicate with each other without speaking aloud through a method they call “halfling sign.”

This ability is present in all ghostwise halflings, but only those part of a family or clan will learn to speak with each other in this manner. The exact nature is unknown, but it seems to be a form of telepathy.

The Strongheart halflings are a race of stout and hearty adventurers who tend to be slightly larger and heartier than average halflings.

Their skill and speed by-lies their strength and endurance, allowing them to wear heavy armor without as much cost as other races.

Stronghearts are a more daring subrace that makes their homes in hills or other high, exposed places. Fences often surround their home villages to protect them from beasts and predators.

Halfling names are beautiful in their simplicity and their meaning. They consist of 3 parts: a given name, a family name, and possibly a nickname.

A halfling’s name is given to them at birth and is usually chosen by their parents or grandparents. It tells something about their personality or background.

A halfling’s family name is a nickname they are given when they reach adulthood. It reflects their personality or interests.

Halfling names are often straightforward, but they have a fun quality that you won’t find in other races; the same may be said for their surnames. Female names are frequently softer and more melodious, and it’s usually simple to distinguish them from masculine names.

Eldon is a male given name. It comes from Old English, meaning old and servant. The name was borne by one of the companions of the Anglo-Saxon hero Beowulf, who fell in battle.

Drogo originates from the English language and means “to carry.” It is a male name, suitable for baby boys.

Adelard means brave and noble and originates from the German or French language.

Regis is a Latin name. In Latin origin, the meaning of the name Regis is King.

Alora means to dream and has its origins in African roots.

The name originates from the Greek language and means sparkling.

This name means charm in English and originates from England.

Eglantine is a type of wild rose and stems from English origins.

Belwyse comes from Latin and Anglo-Saxon origins and means lawful or learned.

Fay means loyalty and comes from the Old French.

The name Furret means a little thief and is of Latin origins.

Halfling names aren’t always easy to come up with. But with our halfling name generator, we can help you find the perfect, unique, and fun name for your character in no time at all.

The names created by Halfling name generator are carefully chosen to reflect the personality, history, and identity of the character. You’ll also be able to see how the name looks in both male and female versions.

Enjoy using the Halfling name generator and be inspired to create a masterpiece in your upcoming novel, play, or short story. Start generating names for your fictional character today now that you have all you need!

In the world of notebooks, spiral notebooks never go out of style. Despite the existence of digital notebooks, END_OF_DOCUMENT_TOKEN_TO_BE_REPLACED

As an author or publisher, you’re accustomed to using the power of words to captivate your audience’s interest. END_OF_DOCUMENT_TOKEN_TO_BE_REPLACED

An electronic device that embraces portability and functionality, that’s what defines iPads in our world today. They’re a END_OF_DOCUMENT_TOKEN_TO_BE_REPLACED

If you’re looking for a cost-efficient solution for your print projects, you’d want to try publishing your content END_OF_DOCUMENT_TOKEN_TO_BE_REPLACED