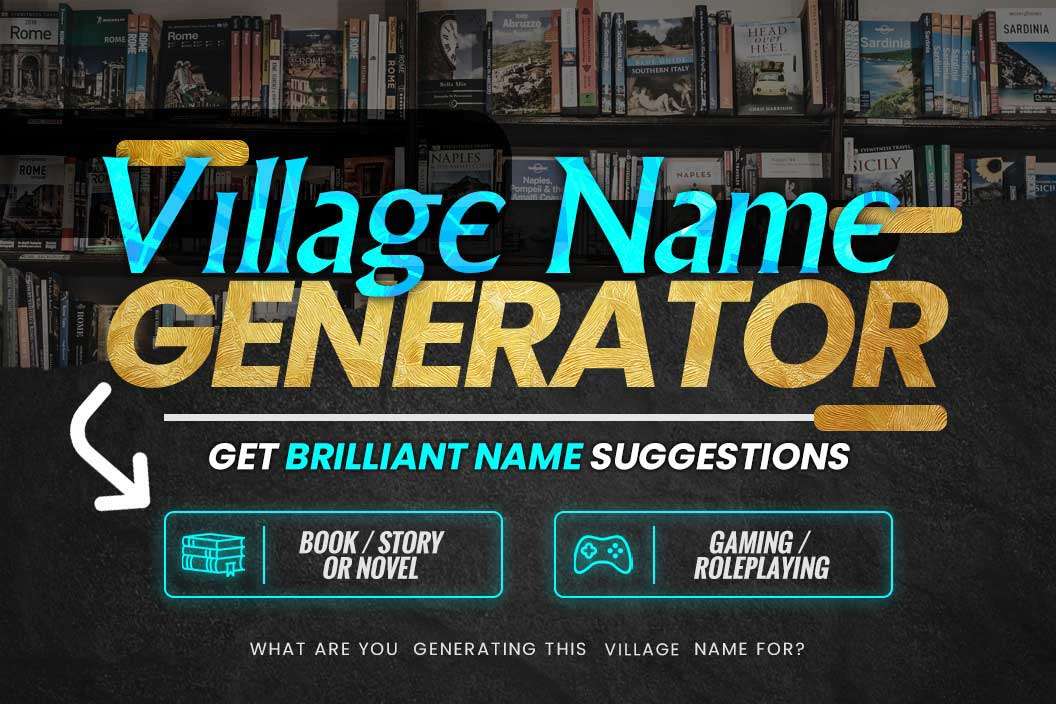 In literary works, names of locations are just as important as those of characters. The locations enhance the reader’s visual perception. They help to internalize the plot and make for exciting reads.

These locations have to be named appropriately. Many writers struggle to form names of locations within the story, as it is not easy. Coming up with appropriate names is essential to the structure and cohesion of the plot.

Failing to come up with fitting names makes the story dull. It makes it difficult for the readers to maintain interest as they read. You should pick captivating names that evoke the reader’s emotions and attention.

Thanks to the Village Name Generator, you no longer have to struggle when coming up with location names. The tool provides excellent and practical suggestions.

Life In The Village

A village is a clustered population residing in a rural area. In most cases, villages have tight-knit communities where people know each other. Life in the village is quite different from city life.

Villages are less populated than cities. Members of villages are likely to interact with everyone in the village daily. On the other hand, cities are pretty populous, with new people moving in and out all the time.

Villages tend to be more hospitable than cities. Because villagers interact with each other so much, they quickly form bonds and friendships. Villagers are therefore warmer and less smug. In the city, most interactions are cut and dried.

In the village, you would have to get around by your means. It is infrequent to find bus services operating in these areas due to the size. It is easier to walk or cycle. On the other hand, cities are full of buses, cars, taxies, etc.

Villages are far less polluted than cities. There is a significant scale back from the mass industrialized cities. The air is fresher, and the water is cleaner. Villages also suffer from less noise pollution than cities.

Villages are more scenic when compared to cities. Villages are wonderful picturesque places. The sunsets are exceptional, and you can take in nature in all its magnificence. Cities are beautiful too, especially at night. The lights are truly intoxicating.

The land use in villages differs from that in cities. Villages tend to have large open and spacious fields. Cities are full of towering buildings and packed streets. In most cities, the only free spaces around are in parks. At times, the parks are crowded.

If you are looking for a fun evening, you will enjoy your time in the city than the village. Cities are full of theaters, cinemas, nightclubs, bars, and arcades. While some villages might have all these amenities, few and far between.

There are better employment opportunities in the city as compared to the village. Many firms and industries are located in major cities.

It has led to rural-urban migration and a steady decline in population in the villages. It has also led to overpopulated cities with high competition for housing and employment.

In villages, the main economic activity is agriculture. Villagers mainly rely on their produce to sustain themselves.

Cities tend to be more culturally diverse than villages. In the city, you will meet people from all walks of life.

Villages tend to have people from only a particular demographic. Villages are also less racially diverse, as many villages stay on their ancestral lands for several generations.

Unfortunately, statistics indicate that people in the village tend to be disproportionately undereducated.

It goes beyond just the basics in school. They are less adept at understanding social issues and putting aside their cultural biases.

These settlement patterns are pretty standard. They are characterized by several households occupying a tiny area and large distances between clusters. Settling in clusters helps villagers to optimize land use. It is also ideal for security.

Linear villages are characterized by settlements that occur in straight lines. People in linear villages usually settle along major roads or riverbanks, or canals. The settlement allows them to use the rest of the land available for agriculture.

Mixed settlements are characterized by a combination of clustered and dispersed settlements. It is common in hilly areas, where people can’t settle on slopes.

There have been some iconic villages encapsulated infamous books. These books highlight how a great village name can make a book enjoyable.

Here are some excellent fictional villages from books:

The detailed descriptions in Village Diary would make you feel as though you live in the beautiful village of Fairacre. The book describes the monthly occurrences in the life of Miss Read.

It is a captivating story that centers around village life and the lively characters’ lives. Village Diary is part of a lengthy series that narrate the events in Fairacre.

Another well-written masterpiece by Dora Jessie Saint, the book is intertwined with the plot on Village Diary. The book’s protagonist is still Miss Read. Thrush Green is the neighboring village just next to Fairacre.

The book brings out the personality and reputation of Thrush Green, amplifying the beautiful and aesthetic wonder of the village. It is a story of love.

Bruno is a very calm and easy-going police officer. He is an ex-war veteran who got acclimated to village life.

Bruno is the only officer in the village of Benoît Courrèges.

Bruno’s life changes drastically then an elderly war veteran is found murdered in the village. The book leads us through an epic investigation into the murder.

The Bone House is a chilling novel about zombie-like beings referred to as Bone Houses throughout the book. It talks about the strange occurrences in the village of Colebren, where dead bodies come to life at night.

Aderyn, the protagonist who is also a gravedigger, and Ellis must journey to the mountains to end the paranormal occurrences.

5. Comerford- Fallen into the Pit by Ellis Peters

Fallen into the Pit by Ellis Peters is a thrilling investigative piece about a murder in Comerford village. The investigation is on the murder of a loathsome pro-Nazi character.

Chad Wedderburn, a World War II veteran, is the main suspect in the murder. He and Dominic Felse are in a race against time to prove his innocence.

6. Bartsetshire- The Warden by Robbin Gilmour

The Warden is an inciteful literary piece about events in the life of Mr. Harding. The story is set in the village of Bartsetshire.

The book seeks to illuminate the issues regarding the misappropriation of donated funds by the church.

Mr. Harding is an honest and prudent member of the clergy. He notices that a charity has donated overwhelming amounts, exceeding the foundation.

John Bold attempts to expose the church for abusing its reputation by collecting more money than charities require.

Major Pettigrew’s Last Stand by Helen Simonson is a feel-good story about tolerance and loss. The incredible novel will have you in tears as the author takes you through the beautiful village of Edgecombe, St Mary.

The narration vividly describes the beautiful and traditional village of Edgecombe. It takes us through the friendship of Major Pettigrew and Jasmina Ali.

Village Name Suggestions For Your Novel

Here are some generated village names that you may find helpful. These names will make the story.

It isn’t easy to come up with names for your characters at random. Why not use the Village Name Generator to ensure the success of your book or play? It provides you with a plethora of notable names at the push of a button.

There’s no need to put yourself through the stress of coming up with names when the Village Name Generator is here to help.

Also gain a step ahead by checking our generators for free 3d eBook cover templates or titles names.

In the world of notebooks, spiral notebooks never go out of style. Despite the existence of digital notebooks, END_OF_DOCUMENT_TOKEN_TO_BE_REPLACED

As an author or publisher, you’re accustomed to using the power of words to captivate your audience’s interest. END_OF_DOCUMENT_TOKEN_TO_BE_REPLACED

An electronic device that embraces portability and functionality, that’s what defines iPads in our world today. They’re a END_OF_DOCUMENT_TOKEN_TO_BE_REPLACED

If you’re looking for a cost-efficient solution for your print projects, you’d want to try publishing your content END_OF_DOCUMENT_TOKEN_TO_BE_REPLACED