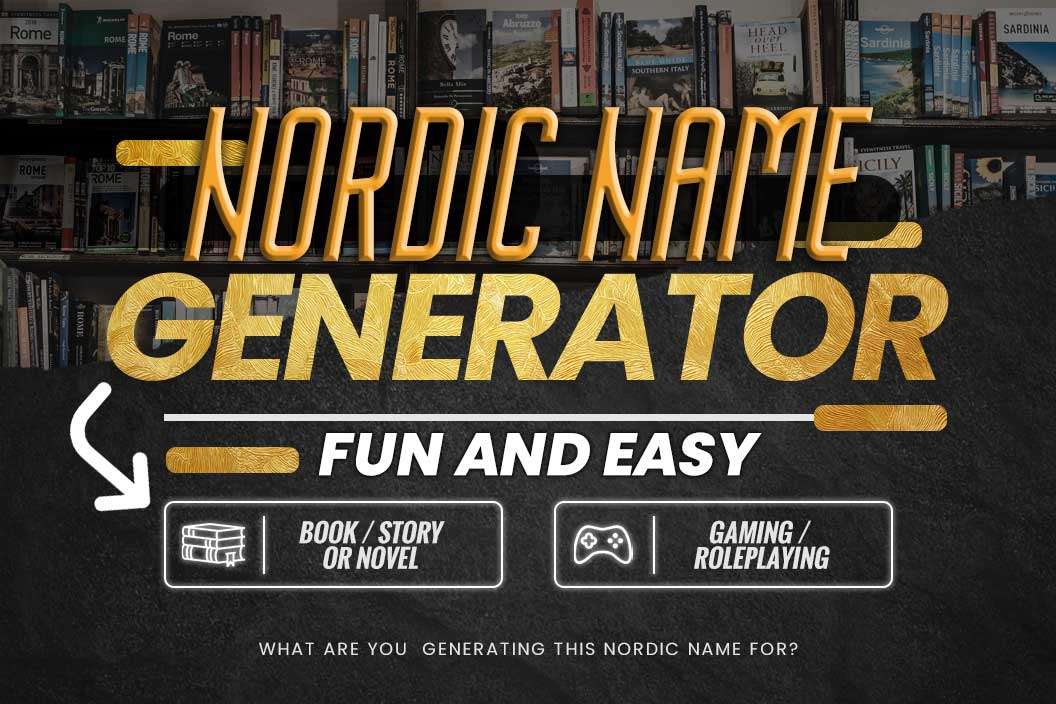 Character naming is usually hard after developing that fantastic story. The Nordic names are usually complicated, and finding the perfect one can be time-consuming. The Nordic name generator will help you find the best names for your characters in a few minutes.

The names created by Nordic name generator are carefully chosen to reflect the personality, history, and identity of the character. So if you are looking for Nordic names, using this generator is a starting point. The names and computer-generated; you will have access to thousands of names with a click.

The article also offers a guide on constructing the perfect Norse name. You will learn more about the structure and elements of the names. Continue reading for more information.

The Nordic region is vast, and the people here share the same traditions, cultures, and beliefs. The region has five countries: Sweden, Norway, Denmark, Iceland, and Finland.

The word Nordic comes from Norden, which is popular in Scandinavian languages. Its literal meaning is northern highlands.

If you read this article, you love Nordic history and have heard about Leif Erikson. Erickson’s nickname was fortunate.

He was born in Iceland and raised in Greenland, and did spend some of his youth years in Norway. Many know him as a Nordic cosmopolitan, and it was during that most Nordic parts became a united kingdom.

They did interact closely with Denmark and Sweden Viking kings. Nordic Vikings reached modern Canada and other distant cities like Russia and the Mediterranean world.

Later many historians and records portrayed the Vikings as blood-thirsty and violent men. However, they were good farmers who cultivated land, livestock, and maritime traders.

With all these activities, the Vikings did modernize their region. The introduction of Christianity meant that Nordic people were closer to Europe culturally.

Unity Of The Nordic Region

The introduction of Christianity brought a new cultural flow to this region. There was the construction of large churches such as cathedrals in Ribe and Stavanger.

Others included bishoprics and monasteries in Greenland far west. There was also the establishment of castles, markets places, and new fashion trends and eating habits.

All these did happen because of growing commerce with several towns plus countries in the far south. However, as development happened, new diseases also came up.

At some point in history, the southern part witnessed the Black Death, which was severe and almost wiped out Norway’s and Iceland’s population.

It’s unclear whether the Black Death was responsible for the demise of Nordic Greenlanders. But the West Greenland Nordic civilization did die during this period in the early 15th century.

The Etymology Of Scandinavian Family Name

Scandinavians have different naming styles. In Scandinavia, people adopted the heritable family name quite late. People from noble families were the first to take heritable names.

The groups that took heritable names were artisans, clergy, and merchants in cities. A person would use primary patronyms with family names (surnames).

Note that most Scandinavian families didn’t use surnames until modern times. Fathers gave the Scandinavian patronyms name with a son or daughter’s suffix.

In Denmark, most family names are simply patronymic. They end with –sen; some examples include Rasmussen, which means Rasmus, son.

Even today, the Danish descendants and Norwegians have similar names, which end with the suffix –sen. Some did change the name spelling to –son. The two suffixes are popular among the people of Denmark.

Most patronymic names are local, rare, or simply a testimony of unusual descent, such as Bolden and Holdensen from the former Duchy of Schleswig.

In the following centuries, most high-class people took heritable names. Clergy loved Latinizing their names, for example, Pontoppidan from Broby, etc., while artisans Germanized theirs. The government did issue a name act in 1771 to all citizens.

The common Norway names were also patronymic and did end in different suffixes such as –sdotter, -scatter, -ssen, -sson, etc.

The suffixes were genitive, and the son had suffixes sen or son while daughters had suffixes datter or dotter. Later, the government did pass a law that all Norwegian should have a similar surname, which runs in the family.

Many did get family names from place-names were farm names. While others adopted farm names, others took patronymic names.

Today most are living the patronymic names for toponyms. Top Norwegian surnames from farm names include Bakke/Bakken, hill or rise, and many more.

Like others, Sweden surnames are initially patronymic. Here most family surnames end with the suffix sson. However, the name adoption act of 1901 did abolish the patronymic practice.

Therefore everyone was to have an inherited surname, from generation to generation. In Sweden, many family names are from nature items such as Berg (mountain), Alstrom (alder), and many more.

In most names, the first part usually tells about the family’s origin. The best example is Strindberg, which means from Strinne.

The names usually have 2nd parts, which are ornamental, and their role is to make the name sound great.

Some families specifically had military-oriented names like Skold, which means shield, or Skarpsvard, meaning sharp sword.

The names were initially given to soldiers in the 16th century under the military allotment system. Service names have greater diversity, making them less common than patronymic names.

It was a popular naming system in Scandinavia. The family name was from the natural father’s first name, different suffixes such as sson, son, sen, dotter, etc.

For example, a person known as Johannes Augustsen was simply Johannes, August’s son. Another example is Maria Pedersdatter, who was simply Maria, Peder’s Daughter.

The system was quite confusing, and it could have several unrelated people with the same names and living in the same place. Today most people are not familiar with the patronymic naming system.

It was simply the best system during the time and culture. The great thing about the patronymic naming system is that at least people got to know the previous generation’s first name.

In Scandinavian culture, the females didn’t assume their husbands’ family name (surname). They did retain their maiden surname through life.

In the early decades, surnames were not consistent. However, in later years most families began settling on hereditary surnames.

People were indeed emulating the upper-class families that had hereditary family names from their titles of nobility.

There were categories of choosing surnames: patronymic (discussed), characteristics, occupation, and places.

Here people choose their surnames depending on their jobs. For example, if you’re a famous local carpenter, it becomes part of your identity.

For example, Elling Hansen Snekkeren stood for Elling Hansen, the carpenter. Other famous examples were Kusken (driver), Moller (miller), and others.

However, occupation names were less common than patronymic and place names.

People took names from their emigrated farms. Note that most Norwegian divided farms from the larger ones over centuries. Therefore people could share a place name.

For example, divide a farm known as Skyrud into different parts. The bearers’ names could be Skyrudhaugen (hill) or Skyrudsteppen (plains).

Therefore one family would choose Haug or Haugen as their surname and the other Skyrud. At times others would use the village names.

Many were valuable and loved the place names since they indicated their origin, especially those from the same region.

Before emigration, the land was relatively scarce in these regions; therefore, some married couples had to rent nearby farms. More so if their family land was over-occupied.

Therefore such families could pick surnames that did not have any historical associations with their families.

Such kinds of names were also less common. They described anything that did relate to the family. However, the attributes of these names are usually associated with patriarchs.

It was difficult to determine whether the characteristics of the names were about a place or person. Examples of character names are Rask (fast), Svarte (black), and others.

In ancient times naming was relatively simple since most people did not have surnames. With time surname became an essential part of the names.

If you look back in the Nordic generations, you’ll notice that many different names describe the same family.

A few forces influence the phenomenon, such as choosing family names, places, characteristics, etc. However, with the Nordic name generator, you won’t have the struggle of coming up with perfect names from scratch.

Also, build your next project by using our generators for professional-looking 3d mock up or good story names builder.

In the world of notebooks, spiral notebooks never go out of style. Despite the existence of digital notebooks, END_OF_DOCUMENT_TOKEN_TO_BE_REPLACED

As an author or publisher, you’re accustomed to using the power of words to captivate your audience’s interest. END_OF_DOCUMENT_TOKEN_TO_BE_REPLACED

An electronic device that embraces portability and functionality, that’s what defines iPads in our world today. They’re a END_OF_DOCUMENT_TOKEN_TO_BE_REPLACED

If you’re looking for a cost-efficient solution for your print projects, you’d want to try publishing your content END_OF_DOCUMENT_TOKEN_TO_BE_REPLACED