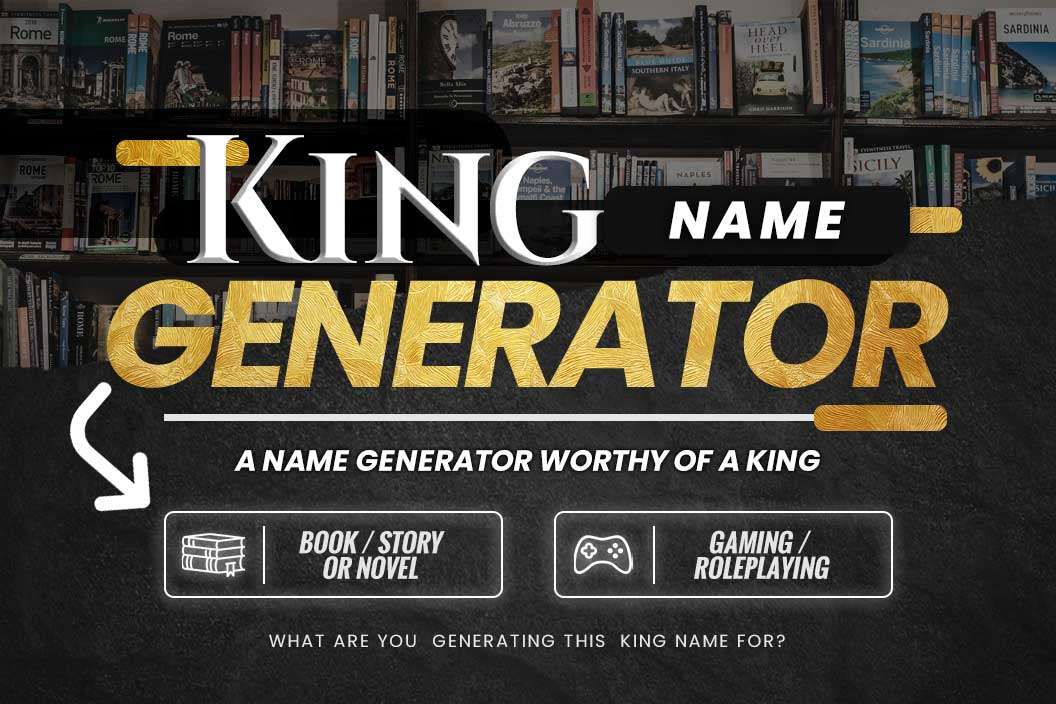 Every great king needs a great name. If you’re reading this, then your fantasy kingdom is probably in need of a royal moniker. In that case, you’ll be able to create a name for your king using this name generator.

The best part is that you can use it for fantasy worlds, video games, or even ideas for the next great book series.

In this article, you’ll also learn more about the origins of the word king and the roles of medieval kings.

Who Is A King?

If a king rules a country, that country is called a kingdom. A queen is the female equivalent of a king or the king’s consort.

A king was often a hereditary ruler of a group of people (most often called a kingdom), though not always.

For example, the United Kingdom is a kingdom. There are also countries such as Liechtenstein and Andorra that are monarchies but not kingdoms.

These countries have no official king or queen, but they have official princes and princesses.

The term can also be used metaphorically to refer to any influential man, or in general as an honorific title for a man who rules by force or wealth.

A prince is a son, while a princess is the daughter of a king or queen. They become king when their father dies or abdicates the throne.

For example, when King George VI of the United Kingdom died, his heir apparent, Queen Elizabeth II, became the ruler.

Origin Of The Word King

The word is derived from the Proto-Germanic word “kuningaz” (meaning son of a noble family) in the late 2nd millennium B.C.

The original Germanic word kuningaz evolved into an Anglo-Saxon word, “cyning,” which was borrowed into Latin as “cingō” and then into French as “ciyung,” before being borrowed into Middle English. “Cwēn” meant queen in Old English.

The Old English name was initially sceaf which meant “sheaf of wheat” and not just “sheaf of royal power.” The word “besceoren” means shorn, and it is thought that the root sheaf in scēaf may have been used as a symbol for royalty in general.

Under the Roman Empire, the Latin title “rex” was the most common word for king. In addition to that, in Greek, there is also the word basileus, which initially meant chieftain and later came to mean king.

The Septuagint translates meleḵ as “basileus” in Ezra and Nehemiah to mean the king of the Jews.

Medieval times were a time of constant war, death, and disease. Medieval kings had to deal with all of that and affairs of state. They ruled over the people and territories, and even churches.

A king needed excellent political, battle, and administration skills to fulfill these roles. Some kings were better at one of these roles than others.

The best kings were smart enough to surround themselves with talented advisors who could help them in their duties.

Few monarchies can rival the scope of medieval English kingship. Succession to a kingdom as vast as England was never a simple matter.

It involved a tangled skein of legal and customary procedures, which varied from regions and from one noble lineage to another.

Medieval monarchs enjoyed a few different advantages that have been lost in modern times. They had more land and resources at their disposal than almost any other government and could raise armies much more significantly than their rivals.

What Were The Responsibilities Of A King In Medieval Times?

In the Middle Ages, kings were responsible for everything. Their role was a complicated one, requiring them to be both statesmen and rulers, as well as advisors and judges.

They created laws and passed judgment on criminals. They were also responsible for trade and industry, so they protected their subjects and provided jobs. In short, they were the model of responsibility.

The king was the law and could be cruel or kind to his people.

A king was supposed to administer justice fairly. That meant he had to punish criminals, protect the poor and vulnerable, and reward good behavior.

He also needed to keep his people safe by defending them against foreign invaders or other dangers.

But kings couldn’t always be on the lookout for crime and injustice, so they had sheriffs and constables who were responsible for keeping track of how their people were doing. And kings relied on their vassals to report back a problem in a neighboring kingdom.

They were responsible for deciding on matters of state, including disputes between nobles and peasants, trade agreements, and alliances with other kingdoms.

The military responsibilities of a medieval king were immense. The king had to protect his people and lands and provide for them. In doing so, he had to collect taxes, build an army and often go to war.

They were also responsible for leading their kingdom into great wars, if necessary, to uphold their nation’s honor or expand its territory.

The people’s expectation of a medieval king was that he be a skilled military leader, a diplomat, and an honest man.

Played A Role In The Economy

They also played a significant role in the economy by creating laws, taxation systems, and foreign policy.

Medieval kings also had various ceremonial duties. They held feasts and tournaments, which they often hosted.

Kings also built and participated in tournaments, a popular form of entertainment in the court.

Provide Heirs to the Throne

In medieval times, the responsibility of a king was to provide heirs to the throne. And they had to be legitimate children too, so any children born out of marriage were regarded as bastards and had no claim to the throne.

Different periods required different skills. For example, the kings of ancient times ruled over vast territories and had to conquer their neighbors. This is why they were often warriors and generals.

Today, the term king may describe a man who reigns as monarch over one or more nations.

However, the world has changed since most of the kings we know made their mark. With the rise of democracy, monarchs are no longer the heads of state. In many cases, they don’t even have direct control over their country’s governance.

Nevertheless, the role of kings continues to evolve, and they remain an essential part of society. Their duties have changed with the times, but they continue to serve a vital function in today’s world.

They are mainly representative and ceremonial; most of their powers have been stripped. Most of them sign documents and are present in meetings. In other cases, the king’s duties include;

There are various kingdoms all over the world. Therefore, your king’s name will depend on the region you base your story on. Some examples of king names for your royal fantasy book are;

A name generator is a valuable tool for royal and periodic fantasy writers. Use it to develop the perfect name for your next novel or character. You can always go back and edit your text to adjust it to fit perfectly with the needs of your project.

These names are based on real kings’ names, and some of them might not seem very royal at all. However, these are still great names worthy of a king! We hope you have found our king name generator to be helpful. Good luck in your writing endeavors.

Enjoyed using this King Name Generator? If you’re looking for more random name generators for your fiction, check out our collection of Fiction Name Generators here.

Also check out our author tools and software to make bookcover or ideas for book titles.

In the world of notebooks, spiral notebooks never go out of style. Despite the existence of digital notebooks, END_OF_DOCUMENT_TOKEN_TO_BE_REPLACED

As an author or publisher, you’re accustomed to using the power of words to captivate your audience’s interest. END_OF_DOCUMENT_TOKEN_TO_BE_REPLACED

An electronic device that embraces portability and functionality, that’s what defines iPads in our world today. They’re a END_OF_DOCUMENT_TOKEN_TO_BE_REPLACED

If you’re looking for a cost-efficient solution for your print projects, you’d want to try publishing your content END_OF_DOCUMENT_TOKEN_TO_BE_REPLACED