How To Analyze A Quote: A Detailed Guide 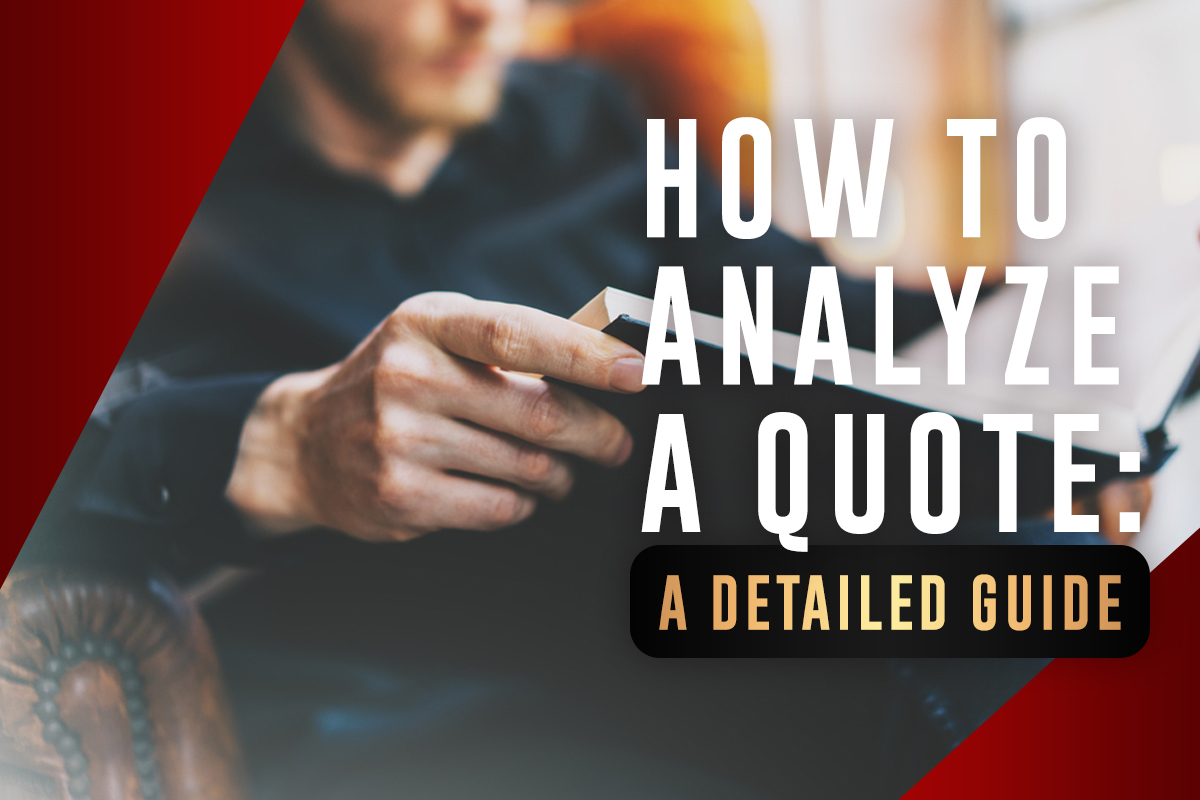 As a writer, you shouldn’t source for quotes to support your ideas after completing each paragraph. It makes it harder to use quotes that way. However, it would help if you have your quotes and examples ready before writing your paragraphs.

In this post, we’ll highlight how you can analyze and format quotes in your work. But first, let’s answer the question.

How Do You Analyze A Quote?

Analyzing a quote involves separating a whole quote into parts for your readers to understand the quote. You should be able to present and paraphrase it to make it easier to understand.

However, to analyze a quote properly, you should first understand what a quote is.

A quote refers to an act of repeating a phrase, sentence, or paragraph from a different source. It may be from a narrative, a speech, or even a poem. It’s also used as a means to illustrate or show a meaning.

Select a relevant quote. It should be written as it was originally. Show the spelling and punctuations within it exactly as it was, not minding the grammar. However, it’s better to use short quotes.

Furthermore, structure the quote regarding who said it, where it was said, and when. It would make sense if you also wrote down the name of the individual who said it, a little about them, and why they said it. Indicate how the quote was made (like as a speech or in a book).

For example, “In her 1998 publication, ‘Emotion and Decision Making,’ Maria Miguel had this to say about love and duty: […].”

Additionally, when presenting the quote, write one or two sentences that increase its importance. Also, you can show how the audience received the quote when it was first written or spoken.

A quote contains a literary technique or style. Literary devices add depth and meaning it. So you can easily identify them. Such literary devices include simile, metaphor, personification, irony, hyperbole, and so on.

For instance, you can write, “Jennifer Skye used a metaphor when she said, ‘The words were touching. They cut deep into our hearts”.

Additionally, you should spot the use of alliteration. It’s called a literary device that creates a repetition of words that start with similar consonant sounds in a sentence. It makes a sentence easy to memorize. So, you should state this when you analyze the quote.

For example, analyzing a quote from Romeo and Juliet, you may write, “Shakespeare made use of alliteration to make a line memorable: ‘from forth the fatal loins of these two foes.’”

Also, point out the tone. Indicate the mood or state of mind in which the quote was written or spoken. And show if it represents the person who gave the quote. You can identify the tone as jaded, critical, ironic, bitter, assertive, formal, and so on.

For instance, you can identify the tone of an Allen Brown quote by saying, “With his normal casual tone, Allen brown wrote, ‘Someone else has to do something about it. What’s the big deal? It’s making everyone waste a lot of time’.”

Describe the meaning of the quote:

You should explain what the quote means. You can start by rewriting it in your own words. Write it in ways that will show the meaning of what the author wrote or said.

For instance, you can write,” In other words, when Brown said, ‘A wise man knows when to say something, but a foolish man says anything he wants, he meant that it’s important to know the right time to say your view.”

Also, show the effect the quote has on its audience, such as creating an emotional response. Add a theme or significance to it as a reason for analyzing it. It shouldn’t be too long. So, use two or three sentences to describe it.

For instance, you can write something like, “This quote from Brown, as a part of population moderation, shows his role in encouraging right family planning.”

Furthermore, evaluate what the author might have intended the quote to achieve. You can do it by relating it to recent events or ideas that are relevant today. Look beyond its immediate setting.

For example, you might connect Brown’s quote, “Reducing pollutions creates a better environment,” to current-day debates on pollution.

How To Format A Quote

To quote other works in your book, you have to format them properly.

How to format a quote using MLA:

When you want to show a quote in your book, close it with double quotation marks. Write the author and the exact page number in an in-text citation. Also, add it to the reference list at the end of the book.

It also applies to other punctuation marks like comma, semicolons, and periods. They should be placed after the citation.

For instance, according to it, manuals should give “specific directions for different aspects of a product” (Brown 207).

Is it possible that they will give “specific directions for different aspects of a product” (Brown 207)?

Additionally, when you’re using short quotes from poetry, signify the break at the end of each line with a slash (/). But if it’s a stanza break, use double slash (//).

Also, if it’s a long quotation (more than three lines of a poem or four lines of prose), don’t use quotation marks. Instead, write the quote on a new line as a free-standing text block. It should be an inch from the left margin (indention) and maintain double spacing.

When you quote more than one paragraph, add an extra ¼ inch indention in the next paragraph. It’ll indicate that it’s a new paragraph within the quote. For instance,

To the end of the festival, John could never remember how he found himself at the edge, without any money in his wallet or the credit card he usually took when he went out. He stopped a cab as he hurried back home.

When he returned, he couldn’t find the food truck. Feeling defeated, he went back to where his friends were sitting. (Arthur 24)

But when you’re quoting a verse, write it just as the exact line breaks, and it should be double spaced.

For poetry, when you don’t add words within the quote, use ellipses to indicate it. However, if it’s a whole line of a poem, use periods like a line in the poem. For example,

Mahon’s poem opens with a series of images of eerily deserted spaces:

Even now, there are places where a thought might grow

To a slow clock of condensation,

An echo trapped forever, and a flutter of wildflowers in the lift-shaft

How to format a quote using APA:

When you format a quote using APA, you’ll have to follow the specified guideline. For short quotes, use quotation marks to specify the quote and then write your text. It is then followed by a full citation and the page number (in parenthesis).

It would help if you also used brackets to indicate a word you added to the original quote. Also, add ellipses to show that you removed words from within the quote.

Here’s an example. According to Brown (2018), “The right manuals should have specific directions for different aspects of a product,” (p. 207).

For long quotes (over forty words), don’t use quotation marks to indicate the quotes. Write a block quotation that starts from a new line with half an inch indention. Then, indent any paragraph that follows by an extra half an inch. It should be double-spaced. For instance;

Arthur (2015) talks about a detailed description of the event:

To the end of the festival, John could never remember how he found himself at the edge, without any money in his wallet or the credit card he usually took when he went out. He stopped a cab as he hurried back home.

When he returned, he couldn’t find the food truck. Feeling defeated, he went back to where his friends were sitting. (p. 24)

Quotes serve to strengthen your view about an idea. Analyzing quotes can come in handy when you’re writing non-fiction and academic books. So you shouldn’t just write facts. Instead, back them up with quotes from reputable sources.

Finally, keep in mind that your book should not be filled with quotes from other sources. It should also contain your ideas.

In the world of notebooks, spiral notebooks never go out of style. Despite the existence of digital notebooks, END_OF_DOCUMENT_TOKEN_TO_BE_REPLACED

As an author or publisher, you’re accustomed to using the power of words to captivate your audience’s interest. END_OF_DOCUMENT_TOKEN_TO_BE_REPLACED

An electronic device that embraces portability and functionality, that’s what defines iPads in our world today. They’re a END_OF_DOCUMENT_TOKEN_TO_BE_REPLACED

If you’re looking for a cost-efficient solution for your print projects, you’d want to try publishing your content END_OF_DOCUMENT_TOKEN_TO_BE_REPLACED