How Many Pages Is 1000 Words? Plus Tips To Make Crime Scene Book Convincing 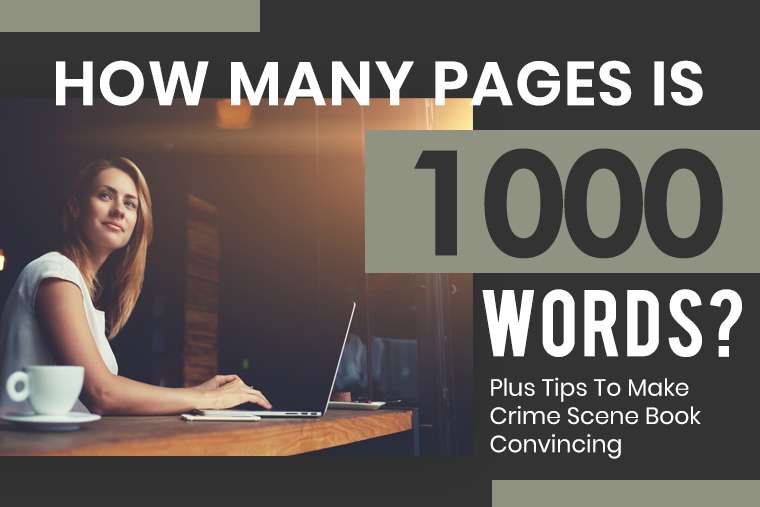 Many authors’ passion for writing starts dwindling after some years of writing. And you start wondering what the cause is.

When you research deeper, you’ll discover that the writers in question started disliking writing for several reasons. One could be that they started seeing writing as a highly demanding task.

Sincerely, writing is demanding and super tiring. Imagine sitting in one place for many hours daily, writing and talking to yourself. That’s what writers go through.

If your font size is Times New Roman or Arial, font size is 12, and you’re using basic margin, a thousand words would give you 2 and 4 pages (Single and double-spaced, respectively).

So, imagine how less tiring it would be to write 2 or 4 pages off your target book per day. In one month, you can finish a book and start another. In a year, you can have a ton of high-quality books to your name.

That’s how many pages you can get from a thousand words. But keep reading to know more.

If you’re planning to write a book centered on crime scenes and want to make it believable, you’ll find the tips here quite useful.

Writing about a crime scene can be a tough nut to crack. Why? You have to start thinking like a detective, medical practitioner, forensic scientist, writer, and many other things. And these sound like a lot, right?

Unfortunately, they’re not. You can draft a compelling crime scene with ease. Just prepare yourself and take the following tips you’re about to read into consideration.

Develop a sound understanding of how people die:

A human being doesn’t die at once when shot. It will take a few seconds to minutes or hours before the person gives up. Sometimes, depending on the area the individual got shot, they could reach the hospital alive before giving up.

However, what kills a human being is when the nervous system is no longer plugged in. But, generally, it can happen in two ways. The cardiopulmonary system could stop functioning and thus, order the brain to shut down automatically.

On the flip side, what causes people to die could be when the brain stops, signaling the lungs and heart to stop functioning.

Now, why is it vital to know these tips? Most of your readers know how challenging killing a human being can be. Besides shooting someone in the head, other ways of killing a person can be messy, time-consuming, and hard.

If you’re stabbing someone, you don’t expect the person not to act. Even animals react and fight back when they know their life is under threat. So, you can’t stab or strangle someone, and the person won’t put up a fight.

Sometimes, attackers get injured before they succeed in taking the life of their victims. That’s the fact.

So, if you want to write a killer crime scene or murder book, you need to understand how human beings die when subjected to diverse bodily harm. If you stab a person in the rib or abdomen, how long will it take before the person dies?

You need to imagine yourself carrying out the act sometimes if you want to deliver a believable story.

Study how to preserve and manage crime scenes:

Even if you haven’t had the privilege to visit a real crime scene, you might have watched a couple of movies and seen how homicide detectives preserve and manage crime scenes.

The detectives have to be extremely careful the moment they gain access to a crime scene. They have to wear gloves and other protective gear. The reason is to ensure they don’t pollute the pieces of evidence on the crime scene.

The forensic scientists have to take pictures of the crime scene and tour the area for any possible evidence, pointing them to the suspect. They can also contact forensic scientists to curb the area to collect evidence such as blood samples, fingerprints left on the wall, footprints on the floor, etc.

So, when writing a crime scene, you need to show that you have a sound knowledge of these things. And most importantly, you can’t find detectives eating or smoking in an area marked as the crime scene. It’s not a good practice.

Additionally, you can’t find detectives being accompanied by a youngster to the crime scene. It’s not possible. The police don’t allow kids around crime scenes.

How are shreds of evidence stored? It’s similar to what you see in the movies. When the investigators at the crime scene find evidence, they’ll store it in plastic containers. Then, they have to move the evidence to the evidence receiving area for proper storage.

Know how forensic scientists estimate the time of death:

The time the victim died is also crucial to your murder story. So, learn how to estimate it. In real life, the time of death can help investigators to build a case against a suspect.

There have also been murder cases where investigators hired entomologists to estimate a victim’s time of death. They could use the type of insect stalking the dead body to determine the victim’s possible time of death.

When someone dies, their body temperature balances with the surrounding temperature. Additionally, other factors provide a clue on a victim’s time of death. These include color, blood settling, muscle stiffening, and decomposition.

All these can help forensic experts to determine a murder victim’s time of death. So, when writing, try to show that you have a proper understanding of how forensics decides when someone died.

Be careful with your terminologies:

When you use the right terminologies in your writing, you’ll appear as a professional. People who know about murder cases would rate you as a true professional. But when you keep using the wrong terminologies and making mistakes, you’ll quickly lose credibility and relevance.

So, consider using the right terminologies in your crime scene book. A simple Google search will unravel a wide range of terminologies you can use in your work. Additionally, you can watch movies centered on crime scenes. Pay attention to the terminologies used by the investigators, forensic scientists, magistrates, prosecutors, defendants, etc.

Results from the crime lab can help solve a murder case quickly. But unfortunately, don’t expect such results to be out on time. Even if the result from crime XYZ comes out on time, there’s no guarantee that the result for ZYX crime won’t be delayed a bit.

So, what causes a delay in crime-lab results? Labs have a ton of evidence they’re working on. Therefore, the one recently presented to them for analysis has to wait. Additionally, the lab could receive calls from higher authorities to work on newer evidence.

So, don’t expect a crime-lab to make results from evidence collected available quickly. If they did, count yourself lucky.

A Handy Tip: It would make sense to understand how crime labs work. Understand what evidence they normally collect and how they would analyze and interpret the result.

In the case of an autopsy, the pathologist takes small samples off each organ in the body. They then make the samples in slide preparations for proper examination under a microscope.

Book writing isn’t only about putting words together or using the most enticing vocabulary. Your story has to be compelling. It has to push readers and encourage them to pick up your book now and then.

When your story is interesting, readers wouldn’t mind waking up at night to read it. That’s because they know the words could cause their brain to release endorphins. And who doesn’t want to experience such? We all want to.

So, try to make your book captivating. Let the readers develop a keen interest in your book because of how you worded it.

Your crime story is supposed to have two major characters, such as the good (protagonist) and villain (antagonist). Your character’s sex doesn’t matter. What matters the most is their personality.

You can portray the detective, which obviously should be the good one, as a smart person. But state the character’s weakness too. The character may be someone who enjoys drinking. That’s what keeps him or her going.

Additionally, your antagonist should have a personality that makes it difficult for people to suspect that he or she is a bad person. It’s up to you to decide how you want to portray your characters.

If you’re writing a crime scene book, be highly creative. Make your book compelling so that readers won’t want to put it down whenever they pick the book up.

Interestingly, crime scene books offer writers an opportunity to captivate readers. Crime fascinates people, and you can create tons of suspense in your book.

However, crime scene books aren’t the easiest to craft. There are a lot of things you need to understand and take into consideration when writing. We have managed to discuss some of those things to help set wannabe crime scene writers on the right path. So, read and implement them.

In the world of notebooks, spiral notebooks never go out of style. Despite the existence of digital notebooks, END_OF_DOCUMENT_TOKEN_TO_BE_REPLACED

As an author or publisher, you’re accustomed to using the power of words to captivate your audience’s interest. END_OF_DOCUMENT_TOKEN_TO_BE_REPLACED

An electronic device that embraces portability and functionality, that’s what defines iPads in our world today. They’re a END_OF_DOCUMENT_TOKEN_TO_BE_REPLACED

If you’re looking for a cost-efficient solution for your print projects, you’d want to try publishing your content END_OF_DOCUMENT_TOKEN_TO_BE_REPLACED