Why Do Writers Use Similes: Read The Shocking Reasons 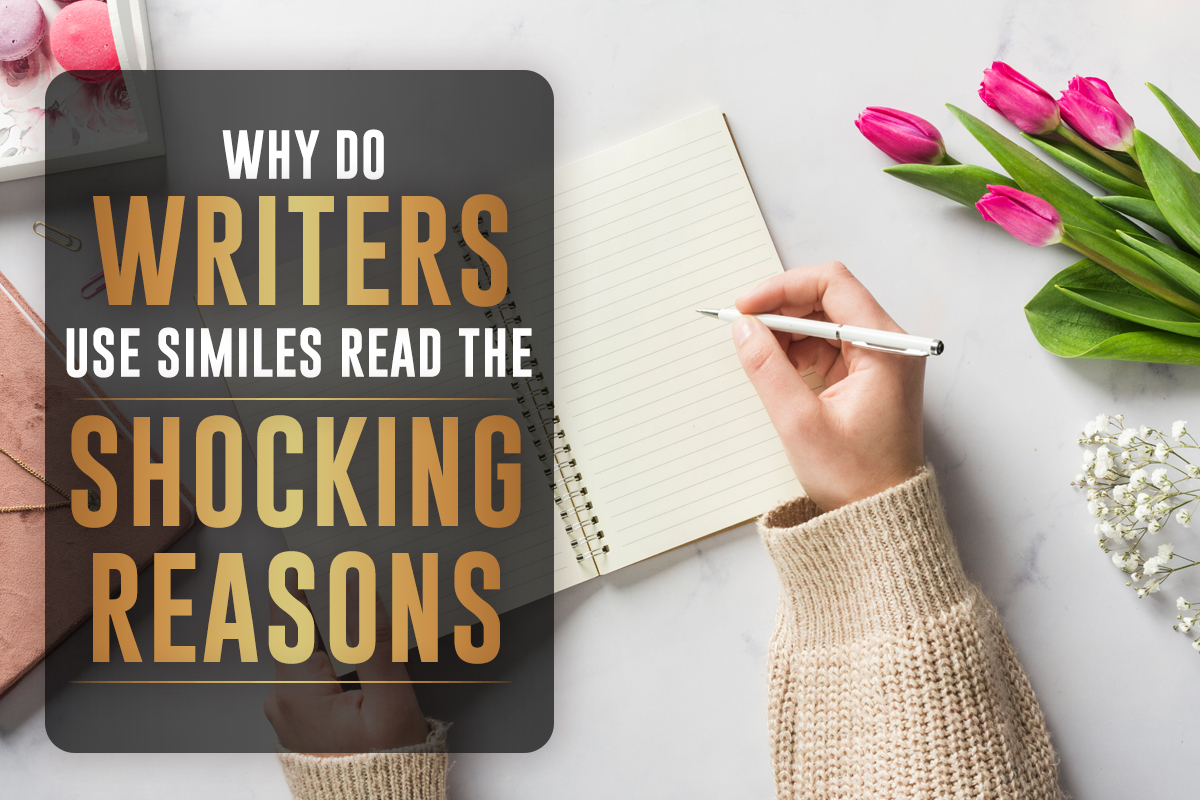 There are various ways to improve your story as a writer. One of them is by introducing figures of speech. They serve to increase the imagery of your writing and make your idea clear. And without mincing words, a simile is one of such figures of speech.

A lot of writers prefer writing directly. They don’t find using similes in a piece of writing that attractive. So, here’s the big question.

Why do writers use similes? Here’s the possible reason.

Firstly, writers use similes in their work because of a lot of reasons. But it’s essential to know that the goal of most writers is to ‘show not tell’ their audience about the story. Simile satisfies this goal and can increase the interest of readers if used rightly.

So, what is a simile? This is a figure of speech, which compares two things directly. These two things may not be related, but they convey a clear meaning of what they’re describing. Also, it expresses the comparison using ‘as’ or ‘like.’ An example of a simile in a sentence is, “Helen’s hands are as soft as a pillow.”

How To Use Similes To Write Effectively

Let it match the character:

Ensure the similes sound like the character and not like you or something different. Let the comparison fit their behavior and experiences.

Also, it can reveal the funny or humorous side of a character. Sometimes, you can only share these thoughts with the readers. And it may be due to the situation facing him. For instance, saying his thoughts will get him arrested or fired.

However, he may say what he thinks. So, everyone knows what he thinks of the situation, such as his job. Each of his options leads to a different story.

It should show the emotion in the scene:

Don’t use a humorous simile when the scene is not. But if the character is not aware of the surrounding, you can use such a simile to show the state.

If the character is overwhelmed by what occurs in a scene, you can use a simile to reflect it.

Not every character in your work should use similes:

This is a piece of advice for writers wishing to use similes in their write-ups. Please note that not everyone uses a simile to express themselves. So, avoid using it for all your characters so they don’t sound alike. But you can still make a twist to it by creating characters that don’t use them well, depending on your storyline.

Use it when you need a word picture:

You may need to quickly describe a setting or a character from time to time. Using simile at this point can create a picture of what you’re describing.

Use it at the right time:

It can be tricky to know when to use it, though. An effective way is to consider the event that’s happening at that moment. For instance, if a character is chasing someone, he might think of the man he’s after “like a race car.” But he can’t use such when he’s in a near-death situation.

Let the character that thinks in similes also speak in similes:

Sometimes, similes shouldn’t be just the popular and normal ones you know but can be unique for your character. Use the character’s behavior, the setting, and the emotion at that time to develop your simile.

Don’t let clever phrases be the center of your work:

The center of your work is what happens to your character and not just “great writing.” It’s also what attracts readers. So your focus shouldn’t be on making clever phrases.

Please keep in mind that it can distract readers and won’t be a good fit if it is too clever and alluring. It would only fit well if it draws the readers into the story. Have it in mind that your readers are looking for a great story and not just clever phrases.

You don’t have to use similes:

It’s entirely up to you to decide whether to use a simile or not. Even though it enhances your writing, it’s not a do-or-die affair. You shouldn’t feel you must use it in all your stories because it’s optional. If you must, use them only when necessary.

When you use simile too often, your readers will notice it and probably get bored by it. So, avoid drawing attention to your writing style with frequent use of simile. Only use it to increase your readers’ interest subtly.

Furthermore, the number of similes to use depends on the length of the story. It also depends on if it is appropriate for the scene.

Finally, learn to proofread your work, spot and adjust any excesses. No matter how well the similes are written, they shouldn’t overwhelm your work.

Choose one of your senses to use. It may be smell, taste, hear, touch, or see. However, lots of people describe things by sight, but the other senses are usually more descriptive. First, you need to identify which one to use. Then work out what the character is sensing.

Furthermore, it doesn’t matter why the character is in that situation. What you should concentrate on is describing it. For instance, using your hearing in a forest, you may hear the sound of wind in trees, the singing of birds, and other animal noises.

Focus on one thing your character senses and write it in active voice:

From tons of things that the character sensed from the situation, focus on one. For instance, it could be the sound as explained in the previous example. When your character uses sound, it can be,” Sam heard the sound of the wind in the trees.” It’s good but is quite dull.

So when you take what he’s sensing and put it in active voice, the sound will be the first part of the sentence instead of Sam. Then you’ll add an adjective to describe it.

Therefore, it’ll become, “The sound of wind in the trees echoed.”

Now, your simile is almost ready.

To construct your simile, you should know what the situation is to you. Also, you have to use your imagination to come up with something enticing.

Continuing with our example, you can construct a simile from the sentence by adding something like, “The sound of the wind in the trees echoed like an angry mob during a riot.”

Just keep in mind that how you use your imagination is up to you because you have endless possibilities to create your similes.

Furthermore, you can use this method whenever you find yourself stuck or want to use a unique simile. Use it to describe whatever goes on in your character’s immediate surroundings. You can also use it to show their feelings or emotions.

Uses Of Simile In Writing

To add depth: Most writers use similes to explain events or the settings of their story. It makes the sentence clear. You can also use a simile to emphasize what you are trying to convey to your readers. It lets you pass a deep meaning with few words.

To express emotions: It makes it easy to show emotion. It can reflect the thoughts of a character. It may also be solemn, funny, or mean. So, simile can express the feelings of the character in a much simpler way.

Make writing more entertaining: Similes can be fun to create. When used rightly, it can boost the story and make it more entertaining to the reader. So, watch out for similes that are generally used, but come up with your comparisons.

For descriptive writing: It’s a great tool to use in creative writing. It brings the readers to imagine what you describe. It improves a sentence by creating sight and sound images.

So, why do writers use similes in their work? We have answered this question in the post and hope you understand it clearly.

But then, it’s crucial to know that when you use simile in your work, make it appropriate for the character. You should also ensure it fits into your story’s setting as well as your genre.

Finally, have fun with using simile, but don’t overuse it. Overusing it can overwhelm your work.

In the world of notebooks, spiral notebooks never go out of style. Despite the existence of digital notebooks, END_OF_DOCUMENT_TOKEN_TO_BE_REPLACED

As an author or publisher, you’re accustomed to using the power of words to captivate your audience’s interest. END_OF_DOCUMENT_TOKEN_TO_BE_REPLACED

An electronic device that embraces portability and functionality, that’s what defines iPads in our world today. They’re a END_OF_DOCUMENT_TOKEN_TO_BE_REPLACED

If you’re looking for a cost-efficient solution for your print projects, you’d want to try publishing your content END_OF_DOCUMENT_TOKEN_TO_BE_REPLACED