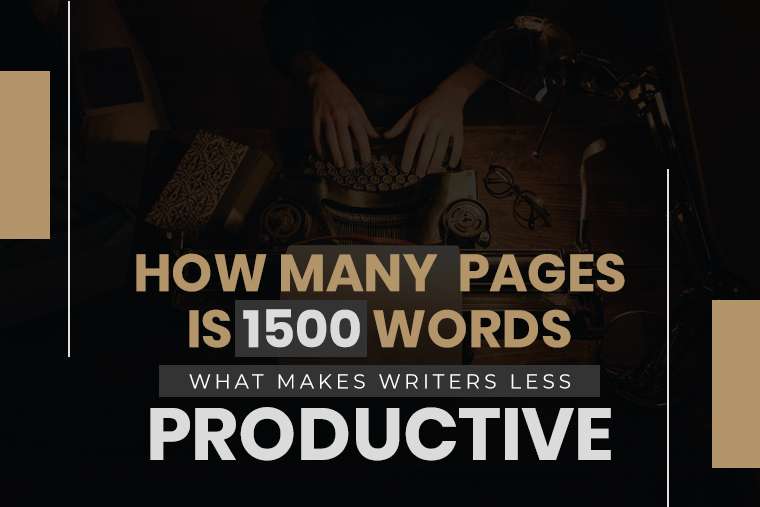 Writing isn’t for the faint of heart. It’s for the bold and energetic. When writing a cumbersome piece, all you want to do is get done with it as quickly as possible.

But shockingly, most people like to get themselves worried about word count when writing. They want to know how much they have done now and then.

Well, keeping tabs on word count when writing isn’t such a bad idea. At least, it will help to ensure you provide all the needed information before hitting the target word count.

So back to the question!

Different factors determine the number of pages a 1500 words book, essay, or article would turn out to be. These include font size, font type, line spacing, and word spacing.

If you’re using Times New Roman or Arial fonts (12pt) and standard margins, such as (1″), a 1500 words article, essay, or book give you 3 pages and 6 pages, for single-spaced and double-spaced, respectively.

Alright, that answers the question, but there’s more in store for you. So, we urge you to keep reading.

A novel should be at least 60,000 words long. So, a 1500 word piece is nowhere near a book. It could be an article, news, or poem. Either way, it’s a piece of writing that took time to create.

When venturing into the writing world, authors need to test themselves with shorter articles or stories. From there, they can start aiming for higher word counts. Just build a good and solid foundation.

However, some people might spend far too much time writing a 1500 word article they could easily have written in fewer hours.

If you aren’t hitting your target as a writer, many factors could be responsible. Let’s go through them one after the other.

You have become an avid procrastinator:

The word “procrastinator” sends shivers down many writers’ spines. It makes them appear lazy, unserious, and unfocused. But the truth is many don’t know they are procrastinators. Why? They have a thousand and one reasons to give in order to elude themselves from the supposed cage called procrastination.

Now ask yourself. Who’s a procrastinator? They never get things done at the right time. A procrastinator might decide that they would write 1500 words before the day ends. But they would most likely not achieve this.

Being a procrastinator can put one’s career in jeopardy. When people know you’re an avid procrastinator, they won’t take you seriously any longer. So, stop procrastinating. If you plan to write 1500 words today, get it done.

However, it’s easier said than done. For the records, many have tried pulling themselves out from procrastination but fall right back in. But the good news is, you can put a stop to it.

Follow these tips to put an end to procrastination.

Forgive yourself for all the times you have procrastinated:

Many are still battling with procrastination because they haven’t forgiven themselves for the past times they have let themselves down.

Most people have procrastinated so much that they now see themselves as born-procrastinators. But that shouldn’t be the case. If you procrastinated a lot in the past and want to make amends, don’t turn back. Forgive yourself for previous times you made a decision not to procrastinate but failed.

It’s time to move on. It’s time to forgive you and take the bold step. You might fail sometimes, but don’t give up. Gradually, procrastination would be a thing of the past.

Get yourself a reward:

Rewards are an excellent way to stay motivated and fight off bad habits. Procrastination is a bad habit, so why don’t you fight it with rewards. You can promise to reward yourself if you do the XYZ task today. It could be after writing 1500 words off your upcoming book or article.

The reward can be anything. It could be a short trip, or you can go shopping, buy one of your favorite dresses, but don’t break the bank. If you choose to use expensive items as a reward, you might go bankrupt before finishing the entire book.

Use a more budget-friendly reward. Remember that it’s not the reward’s size that matters, but the intent behind the prize, including what you want to achieve.

Have cumbersome tasks broken down into smaller units:

Humans’ attention span is shorter than goldfishes. Now this sounds like a slap to humans’ faces. But then, that’s a report put together by a study performed in the early 2000s.

So, it’s common for writers to lose interest in what they’re writing now and then. You would want to close your computer or writing pad and zoom off to the beach or spend quality time with your family.

But the truth is, if you had split your writing task into smaller units and focused on each one at a time, you wouldn’t have had reasons to delay.

So, start breaking down cumbersome tasks into smaller units. Don’t act like a superman, and try finishing everything in one day. When the stress builds up, you could end up not working for days.

You have too many distractions:

After procrastination, distraction is probably the second reason many writers’ outputs have reduced drastically. But what’s more shocking is that many writers battling with this problem always have a way of making it seem like it’s not an issue.

You’ll see a writer working on the computer with their phone by the side. Then, when messages come in, you’ll find them reaching out for their phones now and then.

When you give distraction a chance, your output as a writer will decrease massively. You may even spend more time on that thing that distracts you than the book you’re writing.

Most people don’t know that distractions consume a large chunk of their time daily. Let’s do this simple math.

When you visit your phone or social media accounts 30 times and spend 10 minutes during each visit, that’s 300 minutes in total. And approximately 5 hours.

Here’s how to end distractions.

Consider setting achievable goals. Don’t say you can write 1500 words daily when going by your strength and schedule; you can only write 1000 words.

So start setting smarter goals. When you achieve the plan for that day, you can consider visiting social media, friends, and have fun.

Turn off your distractors:

Phone, video games, television, and other devices can be your distractors. You’ll discover that whenever your phone beeps, you’ll become anxious to know the person calling or texting you.

You may find yourself picking up your mobile device now and then even though it didn’t beep. You’ll feel like you’re expecting a call from somebody.

So, please turn off all the distractors and keep them away from your sight. These include a mobile device and other gadgets. If you need to keep your phones on, install an app blocker or focus app on your device. With the app, you can save yourself from accessing the social media apps on your phone, which are significant distractors.

When you know a topic like the back of your hands, you won’t struggle to write fluently. You’ll also finish whatever you’re writing in record time.

But when you haven’t done concrete research and don’t know the topic you’re writing so well; you could end up making mistakes. This mistake can cause you to repeat whatever you’re writing.

Before you know what’s happening, you have spent half of the day doing nothing. This can cause frustration and make many writers lose motivation.

So, before you write, devote time to conduct concrete research on the topic. But watch out for information overload.

How many pages is 1500 words? That’s the question. The answer is 3 or 6 pages for single and double-spaced, respectively.

We also took time to discuss the reasons many writers aren’t productive. Some spend far too much time writing or finishing their books.

But if you want your audience and colleagues in history to take you seriously, you need to start putting in some hard work. We identified some of the problems that make writers spend more time writing.

In the world of notebooks, spiral notebooks never go out of style. Despite the existence of digital notebooks, END_OF_DOCUMENT_TOKEN_TO_BE_REPLACED

As an author or publisher, you’re accustomed to using the power of words to captivate your audience’s interest. END_OF_DOCUMENT_TOKEN_TO_BE_REPLACED

An electronic device that embraces portability and functionality, that’s what defines iPads in our world today. They’re a END_OF_DOCUMENT_TOKEN_TO_BE_REPLACED

If you’re looking for a cost-efficient solution for your print projects, you’d want to try publishing your content END_OF_DOCUMENT_TOKEN_TO_BE_REPLACED