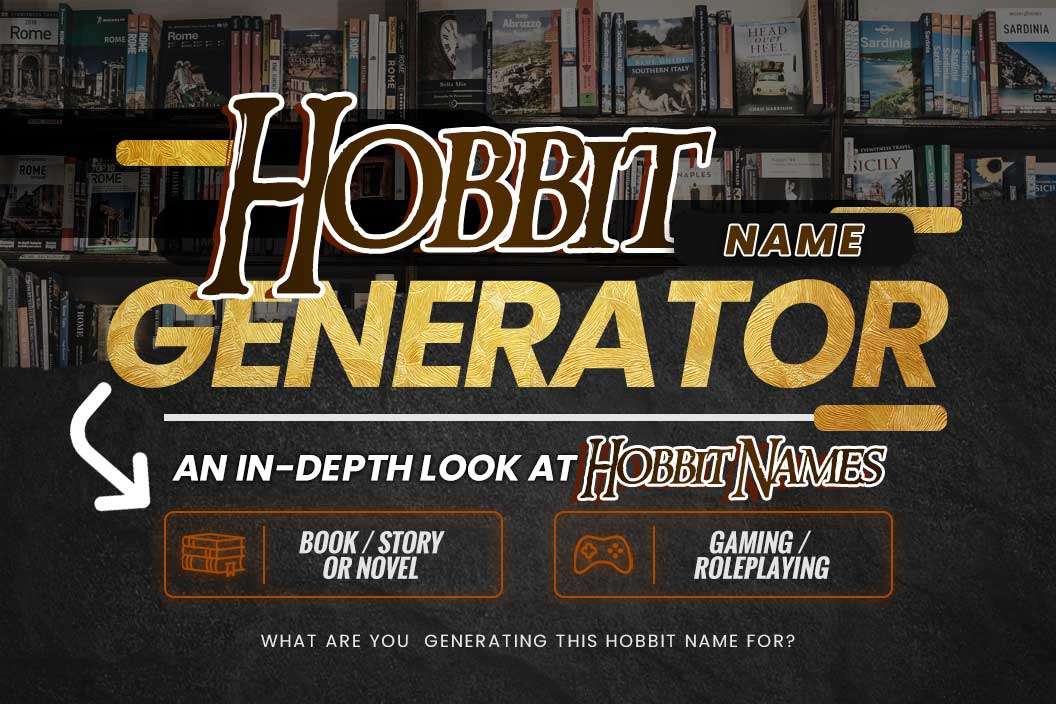 One of the world’s most well-known writers in history, J.R.R. Tolkien, wrote the Hobbit, and it is often viewed as one of the greatest best works of fantasy fiction ever written. The book has changed the world of mythical creatures.

Most works of fantasy fiction of the 20th and 21st century include a hobbit of a modified version of it. They make interesting characters.

Hobbits are fictional and have unique names, and it can be a daunting task to find the right name for such a character.

A Hobbit Name Generator will be helpful if you develop a character close to a hobbit. Note that you cannot use the name “Hobbit” in your works. Copyright cases can be a pain.

The names created by Hobbit Name Generator are carefully chosen to reflect the personality, history, and identity of the character or location. This tool is a must try!

There is no history of hobbits before Tolkien. This prolific writer came up with an entire race of creatures that have managed to hold hostage fantasy fans’ interest for nearly a century. We trace the existence of hobbits back to 1937.

Tolkien’s book is about dwarf-like beings. The Hobbit book is the focal point to all his other works that feature hobbits.

There have been theories about where hobbits originated from, including half rabbits. The writer, on the other hand, has refuted this. Notwithstanding this, the debate continues.

The most logical explanation is that Tolkien took two old English names and merged them to create an alternate human-like race. We cannot be sure about how they came about.

We know that hobbits are another version of human society, and their homeland is somewhere in Middle-earth. They occupy different parts of Middle-earth, such as Hobbiton in the Shire and Bree Village.

Tolkien wrote another famous book that featured hobbits to a large extent, the Lord of The Rings.

Both books have become bestsellers with blockbuster movie series. The Hobbit follows the life of a short, human-like being named Bilbo Baggins.

The Lord of The Rings is a sequel to the Hobbit and features four main hobbits: Frodo, Sam, Merry, and Pippin.

Hobbits are not just unique, and they come with characteristics that define them as individuals with a culture.

According to Tolkien’s description of them, hobbits are short. On average, they are 105cm, with the tallest being 1.2m tall. Compared to an average human, they are half our height.

Hobbits tend to be colorful if there’s anything to show for it; it’s their dressing. They prefer vibrant colors of yellow and green.

Hobbits are not extroverts as far as humans are concerned. They are not willing to take the spotlight to get our attention. However, when the need arises, they can be heroic and bold.

Hobbits do not wear anything on their feet. You can state that they possess thick leathery skin that protects them from injury. Even if they could wear shoes, they wouldn’t last very long.

The majority of the hobbits have a smooth chin. They rarely have facial hair. However, those from a particular race known as Stoor can.

They Have Curly Hair

Another common characteristic among hobbits is curly hair. They have brown curly hair on their heads and feet. Another reason their feet are safe from harm is that they are padded. Probably why they rarely have facial hair too.

They Are Chubby And Cheerful

According to the description, they are neither fat nor thin. Physically they do have a “round” physical appearance. Hobbits are also very bubbly and cheerful looking.

They Have Pointed Ears

Just like elves, hobbits have pointy ears. Yet, they are not as pronounced.

A Life Expectancy Of 100 Years

Hobbits have a life expectancy of 100 years and are more than most humans. They can live longer than this. Case and point, Bilbo Baggins.

Harfoots are considered the most popular of the three. They are generally smaller in size and have a brown or darker complexion.

They choose to walk barefoot and have very hairy feet, which offer insulation instead of shoes. Like the majority of the hobbits, they don’t have facial hair, especially beards.

This race was the first to occupy the Eriador before spreading to Shire and Bree. Their preferred living quarters were holes on hillsides.

Harfoots practice farming and are hard workers, particularly their hands and feet. They are friendly with the dwarf race that lives around them.

Fallohides are the least populated hobbits. They prefer more refined work and spend most of their time hunting, whereas the Harfoots prefer farming. They have mostly been encountered in dense forests.

They are more daring than their counterparts and are skilled in weaponry. Due to their residing in the wilderness, they contact elves and have a peaceful relationship.

In terms of their physical appearance, they are fair in tone and slimmer in stature. Compared to Harfoots, they are also taller. On average, a Fallohide is about 1.2 meters tall.

Fallohide’s small numbers led them to intermarry with other groups, primarily the Harfoots. As a result, they are merged into Harfoots. Still, some Fallohides exist and can trace their bloodline to specific Hobbits. Bilbo was believed to be partly a descendant of the Fallohides.

Stoors were the last group of hobbits to migrate into Eriador. They are the second-largest group of the bunch.

The Stoors preferred residing near water bodies. They preferred activities that required water, such as swimming which their counterparts considered risky.

Such recreations led them to develop solid and thick limbs.

Generally, the Stoors differ from other hobbits by their looks. Their bodies were stout and more likely spent their time on activities that made them physically solid as boating. Their males had facial hair, unlike the Fallohides and Harfoots.

Original hobbit names come few and far between. However, you can find hobbit-inspired names with Hobbit Name Generator easily. Here are some hobbit names to help you start

Like most hobbit names, Arathorn sounds unusual and unprecedented. It is a hobbit-inspired name that is used for male characters. It signifies an eagle king.

Beorn is another character name found in some of Tolkien’s masterpieces. It is frequently assigned to a man. It has several origins, but English and Old Norse are the most common. The name means a champion, icon, or person of bravery.

Éomer is an unusual name that has been used in The Hobbit books. It is put into practice on a male child of a certain king. The original name originated from England from Anglo-Saxon people or means consecrated or gloried and delighted.

Another hobbit name that can build a character in fantastic fiction is Mandos. It is a male name that means umpire. According to Tolkien, Mandos was a spiritual judge, and elves and men gathered in his ‘halls’ to be accessed.

This name comes from the book The Lord of The Rings. Merry is one of the four main hobbies in the book. His name means Mighty Lord, and it originated from the Welsh.

Peregrin is another Lord of The Rings reference. According to the storyline, he was a close friend to one of the main hobbit characters, Frodo. He was not the most courageous of the bunch. But thanks to character development, he overcame his fears and was knighted.

Nienna is a name that has a certain ring and has a certain feminine quality to it. The name is mainly for female characters, and it means lady of sympathy.

The name Lúthien conjures up images of beauty and morality. It’s also a name that would work for any female hobbit. The meaning of the name is “child of blossoms.”

Maia is a name inspired by the spirit world. It is a name that works best for female characters, and it means to be marvelous in the Quenya language.

One of those beautiful names is this one. You don’t even mind giving your daughter. It sounds beautiful once you can pronounce it. It always means youthful.

If you want to create intrigue around a character, a name like Yavanna will do the trick. It is a beautiful name that explains the character of a woman who provides for her loved ones and society at large.

Hobbits are still creating a buzz around the fantasy fiction world. They are still relatively new, and much of their existence is a mystery to most writers.

If you are interested in creating a hobbit-like character in your book or play, use Hobbit Name Generator. It makes your work easy.

Meanwhile, we hope you found this helpful information to understand hobbits more and how fascinating they are. You can use some of the names in your next book if you fancy them and don’t forget to try our Hobbit name generator too!

Also explore the author tools we offer such as our easy-to-use 3d mockup generator and memoir title generator.

In the world of notebooks, spiral notebooks never go out of style. Despite the existence of digital notebooks, END_OF_DOCUMENT_TOKEN_TO_BE_REPLACED

As an author or publisher, you’re accustomed to using the power of words to captivate your audience’s interest. END_OF_DOCUMENT_TOKEN_TO_BE_REPLACED

An electronic device that embraces portability and functionality, that’s what defines iPads in our world today. They’re a END_OF_DOCUMENT_TOKEN_TO_BE_REPLACED

If you’re looking for a cost-efficient solution for your print projects, you’d want to try publishing your content END_OF_DOCUMENT_TOKEN_TO_BE_REPLACED