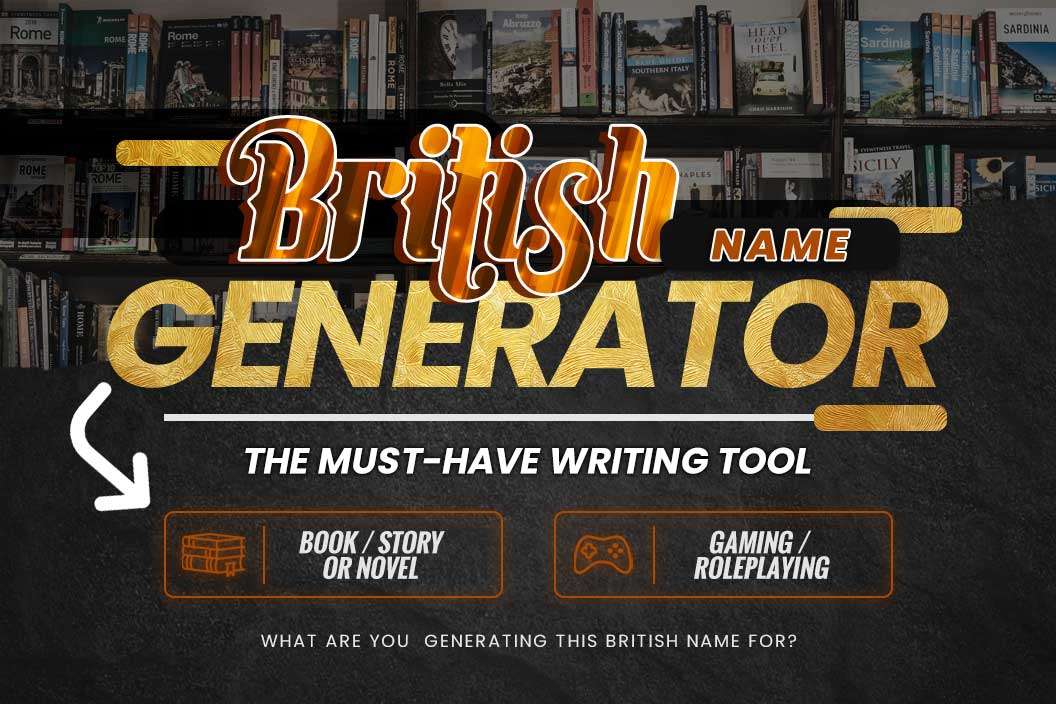 The names of the characters are crucial. They introduce and accentuate the personalities of the subjects.

It aids the reader in conjuring up a mental image of the persons mentioned. For this reason, choosing the appropriate character name is crucial in any literary work.

Many authors have difficulty coming up with character names, but this should not be the case. The British Name Generator provides you with tens of thousands of valuable and worthy choices. The British names created by this name generator are carefully chosen. It’s a must-have tool for any fiction writer.

Britain is an island nation located in northwestern Europe. It is one of the wealthiest nations in the world.

It is an epicenter of culture and tradition. It is evident in the language, architecture, and people.

Britain is made up of the main island and several other isles. Four countries make up the United Kingdom: Wales, England, Scotland, and Northern Ireland. These countries have autonomous governments, but all recognize the monarch’s authority.

The monarch plays a symbolic role rather than an administrative one. The governments play a role in the day-to-day running of the countries.

The primary language spoken in Britain is English. It is also the origin of the language.

English is derived from a mixture of Germanic languages and French. Britain is the perfect place to learn the language. There are variations of English in America, Australia, and Canada.

Other popular meals in Britain are fish and chips (fries for Americans), cheese, mash, an assortment of pies, and Yorkshire pudding.

Several restaurants serve exotic food. We have Chinese, Ethiopian, Mexican, Italian, and many others. Food in the United Kingdom is relatively inexpensive. There are also excellent fine dining options.

Being a former member of the European Union, Britain still uses the Euro as part of their acceptable legal tender in shops, restaurants, etc.

The official currency is the Sterling Pound. You can use these currencies anywhere, so you need not worry about being turned away.

Britain has excellent tourism destinations. There are multiple UNESCO heritage sites in the country.

Some popular destinations are Stonehenge, an enormous rock structure. The Tower of London, built-in 1078, is also famous for tourists and historians alike.

The castle of Windsor is a popular destination. It showcases 11th-century British architecture.

The Canterbury Cathedral is also quite popular with tourists.

The weather in Britain varies depending on your location. Britain experiences all four seasons. England typically experiences a lot of rainfall throughout the year.

The public transportations system in Britain is convenient and affordable. Trains are the best way to travel.

They operate on strict schedules, making it easy to plan your journeys. The cities are full of government-operated double-decker busses.

Most places in Britain are safe. The country rarely experiences any terror attacks. You should, however, take the basic precautions to ensure that you stay safe. Avoid walking down poorly lit alleys at night, and beware of phone snatching.

You shouldn’t be worried about your security, as the country is entirely secure.

The people in Britain love sports. There are various sporting activities to enjoy, such as football, archery, swimming, rugby, cricket, etc.

Football is by far the most popular sport. England has the most-watched football league globally, the English Premier League.

Education for children under the age of 16 is compulsory. The system consists of primary and secondary schools.

There are public and private institutions that follow government-approved curricula. Homeschooling is allowed in Britain.

Britain has some of the best universities in the world. Some famous higher learning institutions are Cambridge University and Oxford University. These ivy league universities only admit the best students from all over the world.

The main religion in Britain is Christianity. It has been the case for 1400 years. There has been a shift in recent times to secularism. Nearly 53% of the populace fail to identify as belonging to a particular sect definitively.

Britain is a fascinating place to visit and study. It has an excellent tourism destination and is rich in culture.

The British people are warm and welcoming. It is truly a fascinating place.

The literary culture in Britain is as strong as it has ever been. There are millions of books and authors covering all genres. No matter your age or interests, many brilliant books are fictional and non-fictional.

British writers continue to captivate many audiences globally through their excellent pieces. These books are brilliant and excellent to read.

Here are some famous works by British Writers:

White Teeth is an astonishing book set in the seventies. The author tries to encapsulate a society where race and religion never get in the way of how people live and interact. It paints a utopian view of tolerance and understanding in England.

The novel describes the lives of Archie Jones and Samal Iqbal, two friends who settled in Willesden, London. These two friends raise their families in a tolerant world.

Atonement is a solid and captivating book about the events in the life of the protagonist Briony. Briony is a brave character who was a young playwriter, nurse, and victim of events in the Second World War.

Atonement captures the readers’ emotions and unwraps layers of the protagonist’s trauma. It is full of twists and suspense and will leave you feigning for more.

Frankenstein is a famous story told and retold through novels and film. It is a permanent part of pop culture and has inspired many science fiction movies and plays. The book is a horror story about the limits of scientific experimentation.

Frankenstein tells the tale of a creature brought to life in a laboratory. The creature is abandoned by its owner and seemingly rejected by humanity.

He discovers its creator and recounts the tale of his existence.

4. Virginia Woolf: To the Light House

To the Light, House is a captivating novel about time, interpersonal relationships, and loss. The story revolves around the lives and times of the Ramseys.

Mrs. Ramsey assures her son that they will be visiting the lighthouse the following day. She fails to uphold her end of the bargain as the weather was not ideal. She and three of her children pass on during the first world war.

Mr. Ramsey is determined to complete his wife’s promise and eventually fulfills her promise to their sons.

Charles Dickens is widely regarded as the most significant British novelist of all time, and you would see why upon completing Great Expectations.

The story revolves around the protagonist Pip. The novel covers many exciting topics surrounding hardship and poverty,

Gulliver’s travel is a satirical critique of the problems that arose from British rule and imperialism throughout the world. The incredible work of Johnathan Swift covers multiple topics in different categories.

Some of the themes covered in Gulliver’s Travel are misogyny and political allusions.

When writing a book with British characters, you do not want to sound overly generic. Exaggerating names also makes it look like you are trying too hard. You have to find the neutral point with character names.

There are tons of British names, and the British name generator will help you get the best. Here are some valuable suggestions for your novel:

Anyone who has written fictional books or scripts knows how difficult it is to develop character names. It tests the limits of your wit. Many writers falter at this point, resulting in an uninteresting work to the audience.

Throughout the book, you want to keep your readers interested. Why not use the British Name Generator to help you out? Thousands of names and recommendations are available using the program. It’s ideal for coming up with fictional names for your novel.

Also use our useful generators at your fingertips to create canva 3d book cover or make a title.

What makes a book cover cool? Although there’s no definitive answer to this question, a few factors might END_OF_DOCUMENT_TOKEN_TO_BE_REPLACED

Creating book covers is an essential part of the publishing process, and a lot of thought goes into END_OF_DOCUMENT_TOKEN_TO_BE_REPLACED

Think about it – when browsing through a bookstore or online, what makes you pick up a book? END_OF_DOCUMENT_TOKEN_TO_BE_REPLACED