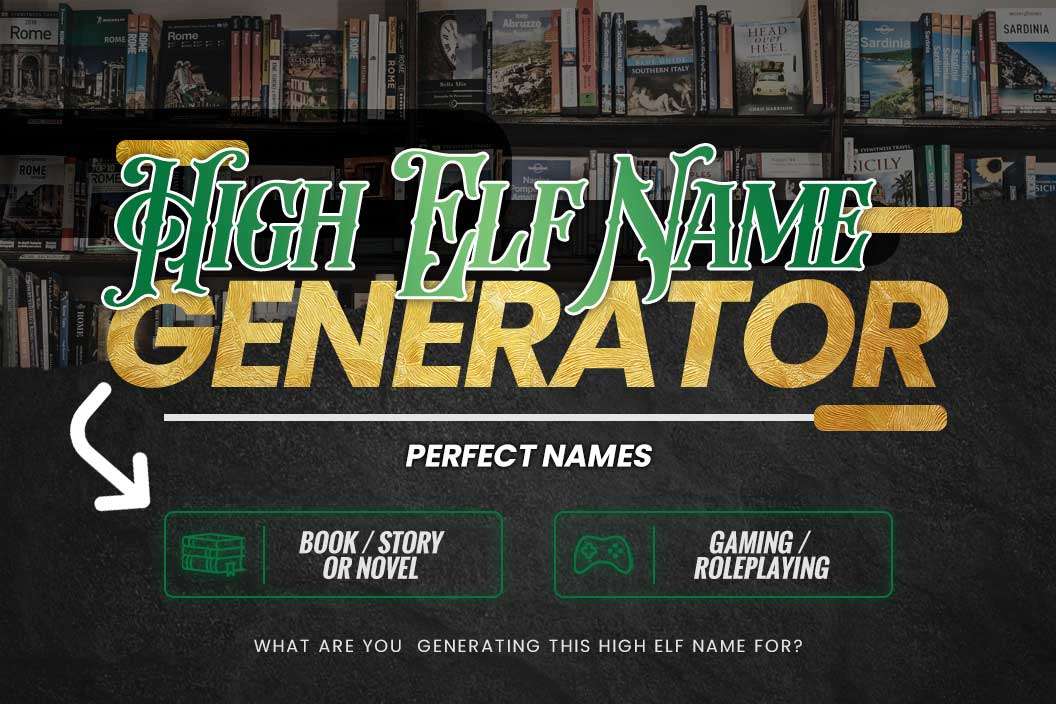 The elf is a supernatural being and originates from Germanic mythology and folklore. Elf names are known to have several traditions.

Almost all elves usually have a family name, and they are simply a combination of other names. At times elves’ names come from their battle achievements and not their parents’ names.

There are different elves in Germanic folklore, such as half-elves, wood-elves, and many more. You are probably writing a fantasy book/novel if you read this article.

There are many races of elves, such as high elves, wood elves, etc. All were known as elves; however, others did refer to high elves as Eladrin.

All elves had similar language and many other similarities. Famous wood elves did descend from eladrin.

High elves were not natives to the prime; they emigrated to Toril during the Dawn ages from the realm of Faerie.

The high elves were common in the prime material plane or Feywild. In the first case, you could find high elves in almost all places of the fey equivalent of Toril.

In these lands, they were in particular places such as Sildeyuir or Evermeet. Prime high elves were common in the Myth Drannor kingdom.

However, many were in the Faerun cosmopolitan regions, such as the sword coast.

Even the powerful high elves are slimmer than other races. They look athletic and not muscular.

Many high elves have black hair with some silver hues.

But this color of hair is standard in star elves and moon elves. Sun elves’ hair colors have copper or blond hues. Plus, their hair is much longer.

High elven eyes are primarily green; the moon elves’ eyes have blue hues, while sun elves have golden eyes. Other elves had violet eyes, though rare.

Their growth would stagnate until 110 years when they were considered adults or mature. High elves were vigorous and active till the middle of their third century.

After this period, elves suffered some old age infirmities affecting other races until their lives ended.

All high elves did not sleep; they could enter trance, also known as reverie, for around four hours daily. During trance, they could meditate on all the recent events.

High elves had strong ties to otherworldly magic and lived for many years. Their worldview was so different.

They did not believe that events over mere years impacted their lives significantly. However, the major tragedies such as spell plague and times of trouble were exceptions.

Elf’s view of things and events was on a much longer perspective and was unconcerned about happenings that stretched in anything below a decade.

Some elves loved secluding themselves. Others stalk the lands as champions while battling the evil outside the magical wards in high elven city.

Elves exceptionally detached worldview made them seem intimidating and distant, plus they were arrogant and haughty. High elves had a powerful fay nature that frightened the races with less magic.

High elves loved the friendship and took it quickly took to heart. Elves could react with super rage if anyone threatens their compatriots.

The elves were brave, intelligent, had arcane power and extreme loyalty to friends. All these made them either formidable allies or dangerous enemies.

In their youth, they were pretty curious, and many did want to explore the world around them. Prominent plaques such as spell plague and times of trouble affected their adventurism.

They made elves retreat to their magical strongholds. All in all, moon elves have a strong impulse for discovery and exploration than the star and sun elves.

The stars and sun elves were cautious when dealing with the outside world.

The high elves were intelligent and graceful beings. Their intelligence was more remarkable than most humanoid races and had agility similar to their eleven kin.

High elves have a strong will and amazingly natural resistance to enchantment effects. They did not need to sleep like most humanoids and could go on trance.

While in a trance, they were so aware of their immediate surroundings. The high elves also needed only 4 hours of rest and got the same effect that other humanoids got in six hours of rest through sleep.

High elves had an ability known as fey step, which enabled them to slip out of their prime to Feywild and back.

High elven society was famous in Faerie and prime material prime. Their cities had magnificent marvels of unique and elegant architecture.

The towers were wondrous, with structures seamlessly blended into places. It was simply natural beauty.

High elven cities were in thin isolated borders of the Feywild and prime, plus in the deepest reaches of ancient forests.

High elves lived in grace and with a magic touch that was in all their lives. Their practices were of all sorts did depend on dance, song, magic, and swordplay.

High elven cities were beautiful and had shapes and forms by magic blending and elegant and graceful designs. Clothing was functional and simple but had the grace and beauty of regular clothing.

Patterns woven into the clothes were beautiful and complex. Even though some clothes weren’t fanciful, they were superior to those in other clothes.

Many high elves did prefer clothes that had natural colors such as green. On holy days and festivals, others wore garments of garish hues.

The high elves trained to use longswords essential in their religion, heritage, and culture.

Relations With Other Races

High elves did reside in isolated communities. However, a few of their kin had dealings or interests with the outside world.

You could find some high elven living with dwarves, gnomes, dragons born, etc. Moon elves were most open to outside dealing and eagerly made friends.

Other high elven races, such as sun elves, were quite cautious of the dealings.

There are many high elves or eladrin sub-races. Others became extinct will others did evolve to entirely separate races. Here are some of the most popular races.

Another name for sun elves is gold elves, and they were so detached and cautious in their dealings. The sun elves always took the long view.

This race is the most popular of all the high elven races. If you heard any mention of elf, it was most probably the moon elf.

Their other name was silver elves, and they were so outgoing, curious, friendly, and bold.

Others did call them mithral elves.

Their skin was dark brown and was the ancestors of drow.

They are the high elves that were isolated culturally and geographically for millennia. They were popular in the isles of Moonshaes and Gwynneth.

High elves have different languages, but the most popular is the Sindarin language regarding names and naming conventions.

The creation of high elves’ names wasn’t tricky, and it was by simply adding a suffix to a noun, adjective, or verb but depending on characters’ last word.

Generally, elves had three names in their entire lives. At birth, the high elves get their first name, and the father does the naming. Son gets the father’s name while a daughter gets the mother’s name.

Parent’s name suffix changes to “ion,” which means the son of or “ien” or “iel,” which means daughter of. The second name is either chosen by the child or mother.

The child needs to be old enough and should know themself well to choose a name that fits. The mother picks the name depending on the child’s personality or vision.

Third names are by anybody and are similar to nicknames. The third name is usually a reflection of the child’s accomplishment or achievement or the physical attribute.

High elf naming is not complicated, but finding the right ones can be time-consuming. The high elf name generator has different name ideas that will interest you.

You will find both female and male names. The amazing part is that fantasy character names do not have any rules; therefore, character naming is more straightforward.

The names created by High Elf name generator are carefully chosen to reflect the personality, history, and identity of the character. Surely, this tool will help you find the best high elf names for your characters.

Also generate the next idea you need with our mock book and our book titles generator.

In the world of notebooks, spiral notebooks never go out of style. Despite the existence of digital notebooks, END_OF_DOCUMENT_TOKEN_TO_BE_REPLACED

As an author or publisher, you’re accustomed to using the power of words to captivate your audience’s interest. END_OF_DOCUMENT_TOKEN_TO_BE_REPLACED

An electronic device that embraces portability and functionality, that’s what defines iPads in our world today. They’re a END_OF_DOCUMENT_TOKEN_TO_BE_REPLACED

If you’re looking for a cost-efficient solution for your print projects, you’d want to try publishing your content END_OF_DOCUMENT_TOKEN_TO_BE_REPLACED