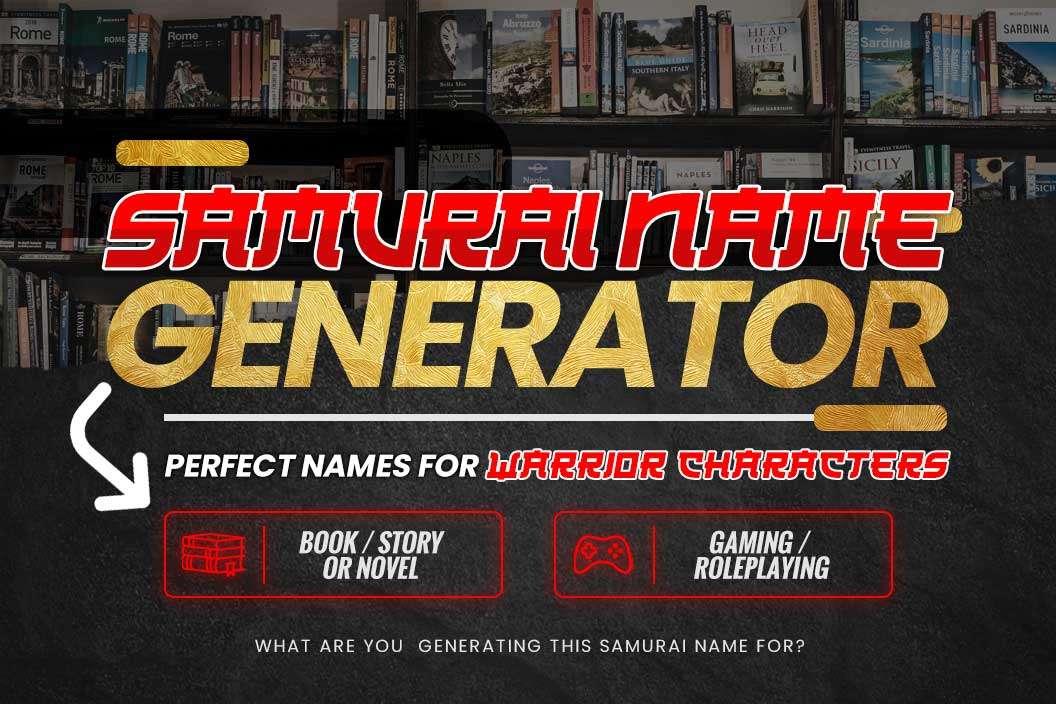 Being a writer demands a lot of creativity both to get a good plot and give the characters appropriate names, and more often than not, the names are more challenging to get than the plot.  It can be particularly challenging if you have many characters from the same culture.

Samurai warriors from Japan make a big part of human history, and they could make for unforgettable main characters in your story. For some who are struggling in coming up with a Samurai name, a tool like a name generator would be a great help.

The Japanese have complex rules for naming their children, and you need to account for this, so let us get into the details of the topic;

Full Samurai names from medieval times were long; one common Samurai name is Tokugawa Dainagon Minamoto no Ason Ieyasu, a mouthful.  He went as Dainagon, so today we will talk about the Samurai and what their names mean;

The first and third parts of the name represent the Samurai clan’s names, which is confusing.  Original clans were there at the first period of Japanese culture, and a few powerful clans grew and took over most of Japan.

Almost everyone was a Fujiwara, Minamoto, or Taira at the end of the Heian period.  These clans were too big since being in a clan did not mean much since clans had too many people.

It was also confusing since many people had the same name, so a new bond came up between the warrior clan as they lived all over the country.  Within the clans, the Japanese formed small family groups, Ie.

The Ie was much smaller, and it included people that lived in the same house, and its name came from the place the family lived.

Using this knowledge, we can understand Dainagon’s name, Minamoto was his clan, and Tokugawa was his household, and both are surnames.

The no character in the middle of some Japanese names means of.  The Japanese traditionally used it in clan names but not in household names.  For instance, a clan surname would be Minamoto No Takauji, but a family surname would be Ashikaga Takauji.

Over time, households grew into huge unmanageable families, so sons from these families moved out to other areas and started their own families.  Depending on the situation, a person could use any household name on the family tree.

This was the Imina, a personal name, and for men, it was different from their birth name.  Boys had childhood names, and when they came of age, they chose a new name, but girls kept their birth names for life.

The first name was personal, and only close friends and relatives used it unless you were a famous lord.

The Japanese believed that calling a person with their name to their face was exerting power over them, but they probably thought it was not polite.

The Japanese still use first names with their close friends and families.  There was an additional informal name that everyone could use to refer to people, in our case, Dainagon. This was a nickname a boy got when he came of age, and everyone could use it.

Since it was a nickname, people would take names or titles for positions they did not hold.  The Japanese called it a Kabane title, and it did not matter much since it was a remnant of a past people didn’t care much for.

You could use your name as you pleased but other people could not.  The specific order and names changed based on what the people wanted, but most prestigious family members used their family names.

How To Choose A Samurai Character Name

Japanese naming systems are significantly different from those used in other parts of the planet, and you must reflect this in your writing.  Most cultures had names from the person’s character, but this was rarely the case in Japan.

The Samurai were honorable and highly skilled warriors that still hold a special place in Japanese history, so you have to do your characters justice.  Here is a guide that will help you come up with the best name;

1. Where the Samurai lives

Most Japanese names are geographical, and you need to maintain this idea in your character for historical accuracy.  You could use the original Japanese clans or make up your own if that is easier to remember.

Remember every detail about the family of the Samurai and where they live to get the name right.

It would be best if you had the clan name of the character or family name, both of which depend on the geographical location of the Samurai.

The Japanese valued family and the family name was a crucial part of naming any person.  This means that you need to account for the Samurai’s background to see his connection to the family to establish the kind of name he will take.

If he is the firstborn and a Samurai, chances are he has a proud father that will allow him to take up the family name.

You could have a different name for your character if he is different and goes against his family, so he becomes a Ronin.

A ronin will not bear the family name in Japanese culture, so you must choose a new name for your character.

If there is a powerful ancestor from the family, you could consider naming the Samurai after them to signify his place in society.

3. The character’s rank or achievements

Most Japanese used names came from ranks they held during their lifetime, which can be a big help depending on your plot.

If you give your character a military background, you can get a name from his past achievements or posts in the military.

You can also use a name from your character’s actions if he was a heroic character.  You can use names like Kimetsu no Yaiba; for instance, if your warrior fought and killed demons are people that the rest of the society was afraid of.

Using personality means that other characters could give a character the nickname to imply what they think of him.

Japanese have a birth name and a different name when they come of age, so you can change the name to what the parents think of their son.

Another way to pick a name is through what the character thinks of himself and his aspirations.  It was not uncommon for people to use nicknames for titles they didn’t have, so you could use a name for your character to show what he wanted.

Now that you have the criteria and fundamental background of Japanese names, you can figure out how to name your character.

There are many excellent samurai names, and the Samurai name generator will help you get the best. However, to get a better idea of how everything works, here are some names you can use as a guide to the perfect choice;

Samurai were always a crucial part of Japan, and you need to keep respect in mind when writing about them.  You could use numerous names, but you have to keep in mind how the Japanese name their people to connect with your readers better. A Samurai name generator is what you need if you’re having a hard time thinking of a Samurai name for your characters.

The Japanese had customs for naming Samurais that depended on clans and families.  It would be best to remember this when writing your story, making sense to readers who know about the culture.  You will get more freedom in choosing a nickname or public name.

With the Samurai name generator, you get access to a lot of samurai name suggestions. The tool will make your work exciting and keep the readers excited and willing to follow the plot.

Discover more of our author tools like our 3d book image builder and our poem title generator.

What makes a book cover cool? Although there’s no definitive answer to this question, a few factors might END_OF_DOCUMENT_TOKEN_TO_BE_REPLACED

Creating book covers is an essential part of the publishing process, and a lot of thought goes into END_OF_DOCUMENT_TOKEN_TO_BE_REPLACED

Think about it – when browsing through a bookstore or online, what makes you pick up a book? END_OF_DOCUMENT_TOKEN_TO_BE_REPLACED