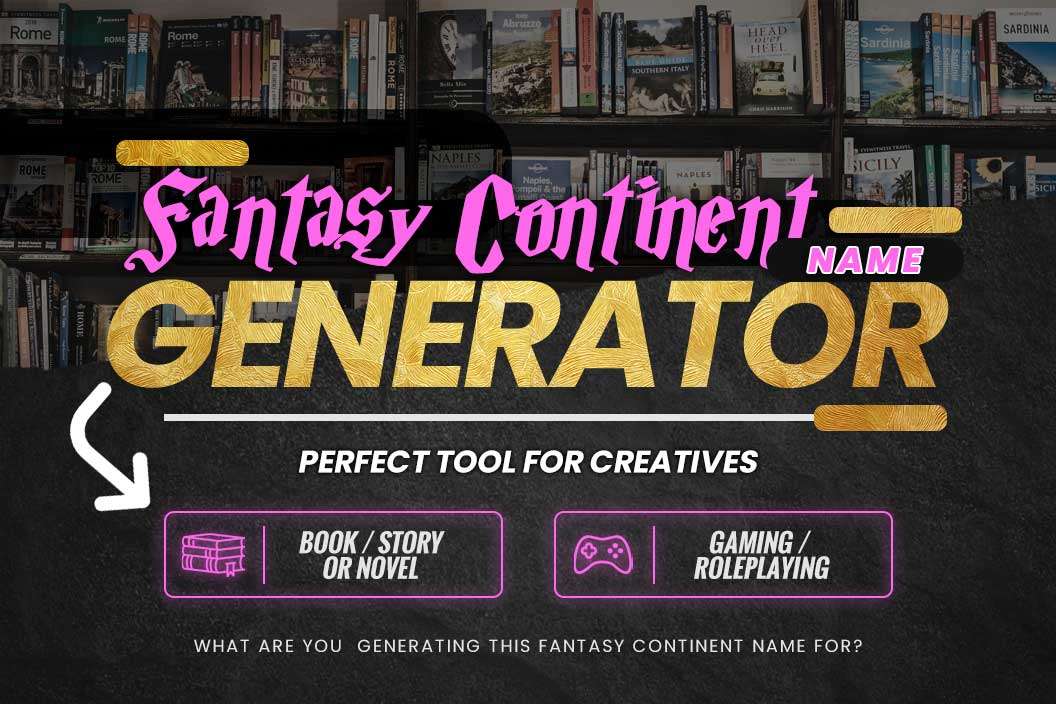 For creatives, coming up with appropriate names is quite tricky. Writers and screenplay writers often spend hundreds of hours coming up with names that reflect the characters’ personalities and likenesses.

In any literary work of art, it is critical to capture a location’s property. It is why naming your places and locations is such a vital element of the writing process. An improper name could diminish the reader’s interest.

While it is tough to come up with names, this should not be the case. So, how do you come up with snappy character names? With our Ancient Fantasy continent name generator, you’ll be able to come up with the ideal set of names for your project.

The program is simple to use and provides good writing tips.

There are many titles on adventure and exploration, where the characters go on epic voyages. The plot has become mainstream, and the books have been adapted into record-breaking blockbuster movies.

Continent exploration literature isn’t exactly new. There are many tales from as early as the Victorian era that tell the tales of exploration.

Here are some of the continents from the best stories:

The story of Atlantis is of a thriving continental civilization. The people of Atlantis had made unfathomable advancements in science and technology, even by today’s standards.

The philosopher Plato described Atlantis as an incredible continent. The size of the continent was larger than that of Asia. It was in the Atlantic Ocean.

It is believed that the continent got submerged underneath the surface of the Atlantic Ocean. Some believe that Atlantis exists and that its inhabitants discovered a way to live underneath the ocean.

Hyboria is a fictional continent full of magical wonder and witchcraft. Hyboria is believed to have come to prominence shortly after the destruction of the lost continent of Atlantis.

Hyboria was a massive continent joining Africa to Europe. It was religiously diverse, with multiple deities. The Mitrans followed an almost Christian-like religion and were devoted to social equality.

The Stygians were known to perform human sacrifices to their gods. The Vendhyrans worshiped Asura.

Other famous literary works, including the stories of Conan the Barbarian, took place in Hyboria.

Sarlona is a fictional continent believed to be the origin of humanity. It is also the birthplace of the Kalashtar race. The vast continent is thought to have been ruled by a powerful council known as the Riedra.

Sarlona has a unified army split into nine units. Members of the units get classified as per their unique abilities.

Nonestica is a fictional world found in the famous Land of Oz. The fictional continent is also referred to as the continent of imagination.

A deadly desert surrounds the continent of Nonestica. The continent has seven countries, the famous of which is the land of Oz.

Ev is a land occupied by ferries. Mo is a land of immortals and magic; animals speak and understand the human language here. Ix is a land of witches. Ripple land is a territory where giant mountains move about in crests and peaks.

Faerun is a continent in which the Forgotten Realms was set. The region is set in relatively modern times, with many sources linking it to a twentieth-century civilization. The Faerûn society is stratified according to social classes.

The continent has several dwellers from different cultures. There are rebellious regions that lack an honest government. The continent is full of magical wonders and wizards. There are several mythical creatures such as goblins, dragons, and gnomes.

Faerûn is part of a Eurasian-like plate, with it being the continent’s western side.

Just like Faerûn, Valinor is part of a larger continental plate. The land is home to immortal beings.

The magical land is home to spiritual beings known as Valar.

The continent is divided into distinct regions. The Vala (Singular for Valar) rules these regions. Mortals once tried to capture the continent with the dream of acquiring immortality. They were defeated and cast out of the continent for all eternity.

Real-life continents are genuinely fascinating. We live on a diverse planet rich in culture and history.

The continents are equally as diverse when you compare them to each other. Here are some interesting facts about real-life continents:

The Asian continent is part of the Eurasian plate. It is the largest continent on earth, with a land size of 44.58 million square kilometers.

It is also the most populous nation on earth, with an estimated 4.6 billion people living there in 2021.

The Asian landscape varies greatly. It has the tallest mountains on earth, located in the Himalayan region. The continent also houses large deserts in the Arabian Peninsula.

Europe is the cultural melting point of the world. It is home to 748 million inhabitants.

The continent can be split into eastern and western Europe. Western Europe is wealthy and prosperous, whereas countries on the eastern side have comparatively less per capita income.

The European continent has two of the smallest countries on earth. The Vatican City is the smaller of the two.

It is the headquarters of the roman catholic church. Monaco is the second smallest country on earth.

Africa is considered the cradle and origin of humanity. It is home to 1.3 billion people.

The continent has more countries than any other. It is the second-largest continent by size.

There are more than 1000 native languages spoken in Africa. The linguistic diversity makes the continent unique.

North America is the third largest continent by landmass. It ranks fourth in population size.

North America has a diverse landscape, bustling cities, and culture.

The hottest region in the world is Death Valley in California, the USA, with temperatures reaching as high as 50 degrees Celsius. Canada is the largest country in North America and the second-largest in the world.

The largest river valley in the world is in North America. The Grand Canyon is 1.6 kilometers deep.

South America is home to 430 million people. It has the largest rainforest in the world, the Amazon.

It is home to a diverse species of endangered animals.

A majority of people on the continent speak Spanish due to colonization in the 1500s.

Australia is the only continent that happens to be a country. It is the smallest continent of the seven. The continent doesn’t exclusively consist of the country.

It encompasses other island countries such as New Zealand, Fiji, Papua New Guinea, and several other nations.

Antarctica is the least populated continent on earth. It is also one of the most hostile places globally—the temperature ranges from -10 to -60 degrees Celsius. The continent experiences unique weather phenomena, including whiteouts, blizzards, raging winds, and unabating snowstorms.

It is ideal for a continent set in an ultra-futuristic setting.

It is perfect for a continent set in the old ages.

It is a mysterious continent full of magic and mysticism.

It is a continent inhabited by giants and monsters.

It is a continent with lush rainforest dwellers rich in culture.

It is a mysterious continent full of unseen dangers and hostile tribes.

It’s perfect for a calm, peaceful, and sacred continent.

It is a continent full of giant fortified empires and distinct kingdoms.

It is a continent inhabited exclusively by elves.

It is perfect for a continent in a medieval setting.

It is ideal for a continent in a war-like setting.

It is ideal for a continent with an ancient civilization.

It is a continent full of dangerous and evil demons.

Creating continent names for your novel or play is not as simple as they appear. You can labor on the screenplay for hours, instinctively creating a compelling masterpiece, only to discover that the names aren’t that interesting.

Continent names are notoriously difficult to create. It takes time to come up with these names on your own, but the service can help you produce thousands of continent names quickly.

With the fantasy continent name generator, you’ll have access to outstanding options that can help you correctly portray the characteristics of these locations. Plus, the names created by Fantasy Continent name generator are carefully chosen. Try using this tool in your upcoming novel or short story.

Also get in on action with our popular builders such as our free eBook cover creator and our random title generator.

In the world of notebooks, spiral notebooks never go out of style. Despite the existence of digital notebooks, END_OF_DOCUMENT_TOKEN_TO_BE_REPLACED

As an author or publisher, you’re accustomed to using the power of words to captivate your audience’s interest. END_OF_DOCUMENT_TOKEN_TO_BE_REPLACED

An electronic device that embraces portability and functionality, that’s what defines iPads in our world today. They’re a END_OF_DOCUMENT_TOKEN_TO_BE_REPLACED

If you’re looking for a cost-efficient solution for your print projects, you’d want to try publishing your content END_OF_DOCUMENT_TOKEN_TO_BE_REPLACED