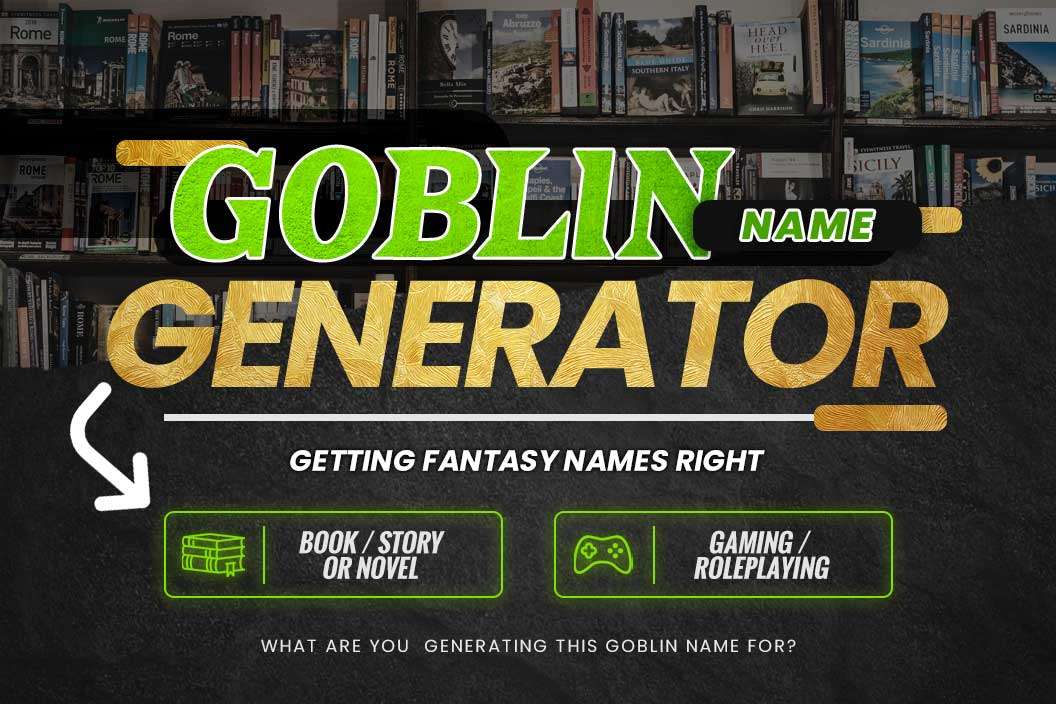 Humans are always looking for an escape from this boring realm, and writing a story that takes them to a new land of magic and wonder will make your work popular.

You could use many mystical creatures in your work, including dragons, trolls, and goblins.

Most people portray goblins as minor characters, mostly in armies, but you can break off from this idea and give a troll a critical role.

In this case, you will need to get an appropriate name for it. A tool like a name generator can help you come up with the best goblin name for your characters.

However, let us get into the details and help you get the best name for your goblin characters.

All cultures have pretty scary and dark creatures and stories, but none are as malicious, grotesque, or obnoxious as goblins. You just have seen goblins in movies, games, or anime with various roles.

Writers mostly portray goblins as greedy menaces that live in the forest and torment humans. But where do these creatures come from? Let us jump into folklore and see what we could learn about these malicious little green men.

Goblins have had many different names over the years, and the English name is a product of French, Latin, and German.

Goblins are subject to many poems where they come off as nefarious or cunning beats that lived in forests or among humans.

Most people don’t know that there is a diversity in goblins, and some species are passive while others are dangerous. One of the most dangerous species of goblins is the Redcap goblin.

This is a terrible goblin along the Anglo Scottish border, and it was a far more sinister goblin that murdered people. The name Redcap is because of the belief that he soaks his hat in his victim’s blood.

This goblin also had long teeth, which he used in killing humans, and red eyes that glowed in the dark.

There are numerous tales of travelers that hid in caves only to end up in this goblin’s cave, and the goblin would kill them with stones.

Thinking but this and the size, you might imagine taking a goblin should one attack you since they are small.

This is not the case since most goblins are superhumanly strong, and most strikes will not hurt them.

There are also Dunters and Powries, variations of the Redcap, but they live around castles and towers.

These don’t kill people, but they are signs of omens and things that will happen in the future, mostly bad things.

The stories differ from place to place, and some societies look at Redcaps as benevolent creatures with good intentions towards those they met.

Others see it as a not directly harmful spirit but can mislead people into doing things they don’t want.

The Hobgoblin is the most common species, and it is not as homicidal as the Redcap, but it can still be a problem.

Goblins coexisted with humans to some capacity, but they were cunning and lived in the basement or under the foundation of houses.

These goblins were like tenants since they would do odd jobs around the house when the owner was away or asleep.

This could include surface cleaning, maintenance work, dusting, wiping windows, and ironing in return for a bit of food.

Hobgoblins, like pranks, can shapeshift and take other forms to help them achieve their goals. Hobgoblins are easy to annoy, so you should let it go if they prank you rather than plotting revenge since they won’t take it well.

Another goblin that loves pranks is Dobby, and they have malicious pranks that could be dangerous.

Stories depict them as so annoying that they cause families to move from their homes and follow them to the new house.

There are many types of goblins, and most are evil characters, but some can be good. You need to think about it and create a character that your audience will connect with, but anything can pass when it comes to goblins.

How To Get A Name For Goblin Character

Getting the right name for your character is a big step in getting your readers to like the book. There are many names to choose from, and it could be challenging to land on the best name, so here is a guide to help you navigate to the best;

1. Keep the period in mind.

There is a clear difference between our names and Knights’ in the stories of Arthur and Camelot. We are in different periods, so your characters’ names should speak for the story’s time.

Goblins are unpredictable, and they could be good characters or villainous. Nonetheless, you have to give a goblin a name that portrays his behavior so that the reader gets in the right headspace when reading about him.

If you have a good reason to, you could give the character an unusual name that doesn’t speak to their personality. Maybe it is something that people believe him to be, but it is not valid, so it can come off as an ironic name.

3. Consider the characters that named the goblin.

Some writers have their characters in the story pick names for other characters, which is a crucial factor to consider. You must ensure the name that characters choose makes sense and has significant meaning to them.

If the goblin is dangerous to them, it makes sense that they will give it a name that makes it sound dangerous. Names are a good way for your characters to show their feelings about the goblin, so use them wisely.

4. Consider adding an extension to the name.

Sometimes you might run out of names and use one that isn’t necessarily informative but using an extension might make all the difference.

For instance, George R.R Martin uses Balerion for a dragon, and the name is cool, but it doesn’t say much.

To remedy this, he made it Balerion the Dread; adding the extension makes all the difference, and you can feel the danger in the dragon’s character.

Adding extensions will also give it an ancient feel which will most likely be the setting of your story.

5. The story’s ethnicity and meaning of the name

A character’s name always comes from the society where the character lives, which must stick for all characters.

If your setting is Norse, then the goblins’ names must be of Norse culture; if English, the name must be of an English source.

Some names have a literal meaning, which can be a good option for characters, especially if there is a common name in your target audience. For instance, Karen was a hit in the movie since the antagonist’s name said everything about her.

Having a guide to how you can find the best name might not always be the best help, and you might need help to give additional names to some of your characters. Our Goblin name generator if a perfect tool that you can use to find the perfect goblin names. However, here’s a list of potential names that can work for goblins;

Goblins are prevalent in most fiction stories, and you can make it big if you get the name right. There are dozens of names to choose from, and you have to choose one that speaks for all characters in your book.

Naming characters is one of the best ways to tell a story, so you must get this right. If you feel like the name wasn’t good enough, you can add an extension to convey a more apparent meaning to the audience so they connect with your character.

Another way is by using the Goblin name generator as it will help you find the best names for your characters. It is an essential tool and is intuitive, fast, and straightforward.

The names created by the Goblin name generator are carefully chosen to reflect the personality, history, and identity of the character. It is a great tool, as it issues creative and practical suggestions.

Also feel free to look around our incredible range of tools like our eBook cover creator and our book title generator.

What makes a book cover cool? Although there’s no definitive answer to this question, a few factors might END_OF_DOCUMENT_TOKEN_TO_BE_REPLACED

Creating book covers is an essential part of the publishing process, and a lot of thought goes into END_OF_DOCUMENT_TOKEN_TO_BE_REPLACED

Think about it – when browsing through a bookstore or online, what makes you pick up a book? END_OF_DOCUMENT_TOKEN_TO_BE_REPLACED