Half-Elf Name Generator: A Guide To Picking Your Elf Name 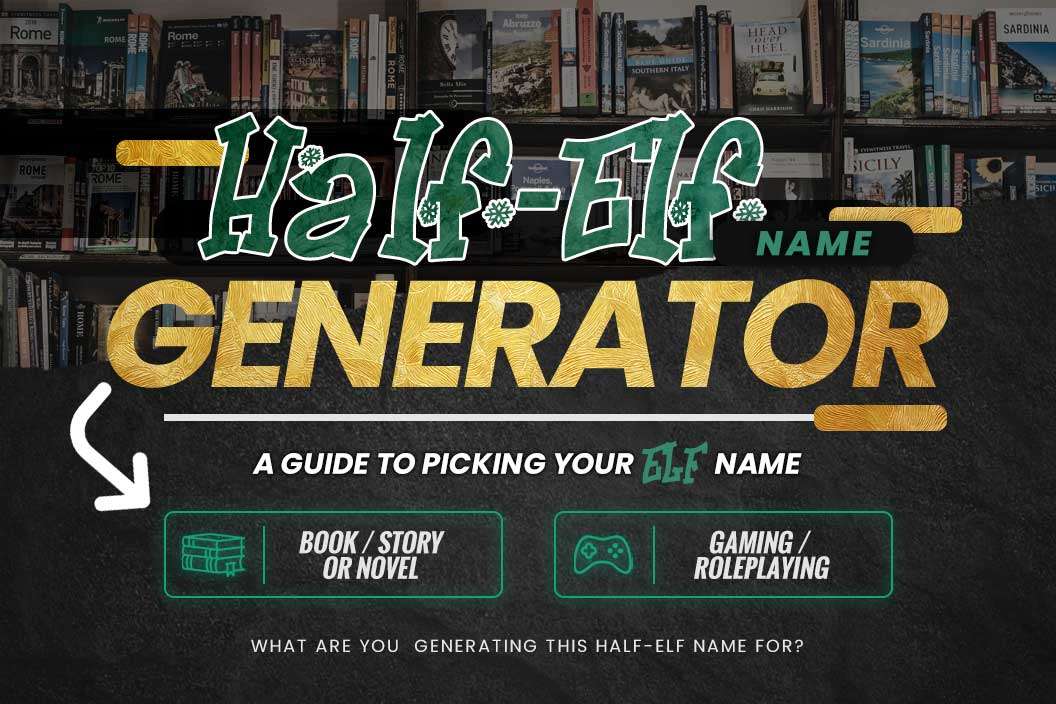 If you’re writing a fantasy, choosing a name for your character is an important decision. It’s a reflection of their personality and how they fit into the world you’ve created.

However, generating a name can be difficult, especially if you’re not sure what kinds of characteristics you want your character to have.

If you already know the race and class of your character, this generator can help with the rest.

Why settle for a boring human character when you could have a Half-Elf?

What Is A Half-Elf?

Half-elves are a magical hybrid race obtained when a human and elf have a child. The elven blood in their veins grants them many elven qualities, while their human blood allows them to live in both societies as a member of either race.

This means they have the potential to be incredibly powerful if they choose the suitable class.

They are prized for their intelligence and curiosity. They are more intelligent, faster, more potent than the norm of either race.

However, both parental races have often persecuted half-elves as they are not considered genuine members of either society.

They usually are considered beautiful, but they don’t live as long as elves. And they can’t use magic like their full-blooded elven counterparts.

Sometimes elven cults kidnap humans and keep them prisoner until they give birth to half-elves for sacrifices.

Half-elves have a variety of physical traits because they are the result of two separate races in the world;

One of the half-elves’ most prominent and notable physical characteristics is their height. They tend to be taller than humans but shorter than full-blood elves. They are of medium height to tall, usually ranging from under 5 feet to 6 feet.

This is because their elven blood gives them a greater height and causes them to mature faster than humans, who mature slower.

They have a build somewhere between the stocky robustness of Humans(100-180 pounds) and the slim gracefulness of Elves.

Their ears are slightly pointed but less so than those of full-blooded Elves.

Half-elves also gain some elven features from their other race. Their skin tends to be lighter and smoother than humans, although not as pale as full-blood elves.

Half-elves enjoy the best of both worlds: they are curious, imaginative, and ambitious, and they have refined senses, a love of nature, and aesthetic sensibilities.

Half-elves are just as likely to be in good alignment as any other elf. Well-aligned half-elves are especially common.

Half-elves have a unique relationship with the world around them. They are not as strong and healthy as full elves, but they are much more agile than their human counterparts. As a result, they can live longer than either of their parents can live.

They, like elves, cherish personal independence and creative expression but show no affection for leaders or desire for followers.

They despise regulations, dislike others’ expectations, and might be untrustworthy, or at the very least unpredictable.

They prefer to live in human cities to find more rewarding work than farming.

Because half-elves are usually considered outsiders in their communities, they tend to be adventurers. They don’t have a solid family base to fall back on if things go wrong.

They often find themselves pulled away from home comfort to prove themselves to the world around them. Half-elves are also charmers who use wits and looks to get what they want.

Half-elves have a split heritage. They follow either of their parents’ religions, depending on where they live. If they live with humans, they worship human goddesses, and in elven land, they worship elven gods.

The language of half-elves is a derivation from the humans’ (Common), but with a significant amount of elven words thrown in.

Half-elves age at the same rate as humans, often reaching maturity around 20. They do, however, live far longer than humans, frequently surpassing 180 years.

The longevity of the elven kind means that half-elves can live for centuries and mature slowly over time: their bodies don’t develop in a way that would make them physically comparable to either humans or elves.

Half-elves, one of the most diverse races, have a wide range of abilities that set them apart from humans, elves, and half-orcs.

Half-elf subclasses can vary wildly from full-blooded elves or humans, depending on their level of acceptance in the culture they grew up in.

Some of the subclasses of Half-elves are:

Aquatic half-elves are a race with an affinity with water, in its liquid form and as a solid. They result from the union between an aquatic elf and aquatic humans.

They are very comfortable in both environments and have adapted their bodies to endure extreme temperatures and deep underwater pressure. They have developed powerful lungs.

In terms of their appearance, aquatic half-elves closely resemble other elves. Though pale green-skinned, they have the same hair and eye colors as their elven parents.

Aquatic half-elves hold themselves in higher regard than other half-elves. While they view themselves far superior to land-dwelling half-elves, they don’t treat them with the same disdain as high elves do.

Drows are a race of dark elves who live in the Underdark. They are often obsessed with power, ruthless, and foolishly arrogant. Drows were once elves, but they became corrupt and changed into the form they are now.

Drows are often misunderstood. They believe that every living creature is enslaved to fate, so they take what they want by force and kill without remorse. They disrespect life and nature, and they feel no regret or guilt over the suffering they cause.

Drow half-elves descend from these drows.

Wood Half-elves are as good with bows as Elves are better with axes. They are also skilled at moving through forests unnoticed and finding their way out of the wilderness.

They can be found in any land but prefer to live in intense forests. Most wood half-elves are unfriendly and reclusive, hating all races that trespass in their territory.

They are incredibly territorial creatures and, unless talked to first, will often shoot anyone who gets near them on sight.

Wood half-elves are exotic and mysterious, but they are also known for their incredible art and music skills.

Snowcaster is a subrace of elves. They are taller than humans and have paler skin. Their ears are pointy like elves, but they tend to be more rugged and muscular than other elves. Some snowcasters have distinctive frost-white skin that sets them apart in human settlements.

Ekujae or wild-born half-elves descend from Ekujae elves, a militant subgroup found in the Mwangi Expanse. They are associated with deadly weaponry, such as the poisonous thistle arrow.

Half-elf names are some of the most creative and exciting in fantasy.

Whatever you choose, it is essential to remember that elves live centuries and have deep, rich traditions. A half-elf character’s name should reflect that history.

There are many excellent half-elf names, and the Half-Elf name generator will help you get the best. Here are some examples of the best half-elf names.

The fantasy world allows us to explore a whole new reality full of magic, witchcraft, and elves.

It’s essential to give your half-elf character a name that is both memorable and fits the personality you’ve created for them.

We’ve covered everything you need to know about elf names in this guide. If you need more ideas, our Half-Elf Name Generator has plenty!

We hope you’ve enjoyed this guide to picking an elf name and that it’s helped you choose the perfect name for your new avatar. Explore our Half-Elf name generator as well and focus on writing rather than guessing. Good luck in your future fantasy writing adventures!

Also explore more of our author tools and software starting from our free eBook mockup maker or our fantasy book name generator.

What makes a book cover cool? Although there’s no definitive answer to this question, a few factors might END_OF_DOCUMENT_TOKEN_TO_BE_REPLACED

Creating book covers is an essential part of the publishing process, and a lot of thought goes into END_OF_DOCUMENT_TOKEN_TO_BE_REPLACED

Think about it – when browsing through a bookstore or online, what makes you pick up a book? END_OF_DOCUMENT_TOKEN_TO_BE_REPLACED