World Name Generator: Own A World 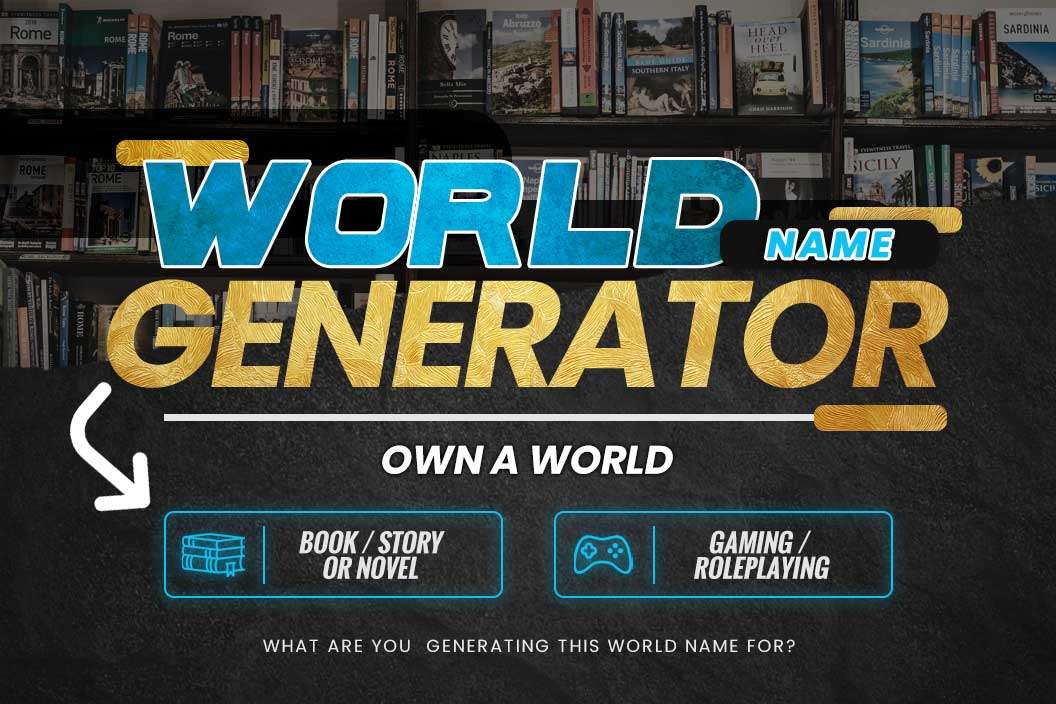 You are probably writing a fantasy book. Fantasy books have epic sagas such as Rowling, Martin, and many more. If you love fantasy, then you must indeed have your fantasy story to tell.

Writing this genre can be pretty complicated. It does not have hard and fast rules that a writer must follow. However, there are specific elements that you must include to make the story a fantasy.

In the fantasy genre, the writers have to create their fantasy worlds. Usually, the people and creatures inhabit the world that claims the reader’s emotion.

A fantastic brand new world name is also something to marvel at. Choosing the perfect world name can be tricky, but the world name generator will help you find the best name.

The names created by the world name generator are carefully chosen. Plus, this tool is suitable for all sorts of authors.

The Best Fantasy And Fictional Worlds

Creating a fantastic fantasy story with exciting fantasy worlds can be pretty tricky. You might not have an idea of where to start.

The list in this section has some of the famous and most-loved worlds that can help you choose names.

The TV series is one of the most popular today. It has both fantasy and non-fantasy-fiction fans that love the epic tales by Gorge R. R. in the fantasy world Westeros.

Amazing Westeros is only a part of the sprawling world. Westeros had a solid historical core that made it feel so real.

The Lord of The Rings: Middle-Earth

Middle earth is one of the famous fantasy worlds. Middle earth has almost everything from barbaric savages, immortal and wise elves, plus dark overloads with intentions of leading them.

A Wizard of The Earth Sea: Earth Sea

The fantasy writer, a wizard of the earth, did create an all-time greatest sorcerer. The sorcerer was a sparrow hawk and lived in the famous fantasy world known as the Earth Sea.

The earth sea is full of dragon-taming, power, and magic. The Earth Sea features many exciting features, such as thousands of islands.

Plus, uncharted oceans surround the islands. Their sea contact influences the way of life for the earth’s sea people. Magic is their life’s central part in this fantasy world, except in Kargish.

Harry Potter series is among the best-selling fantasy. Hogwarts school’s fantasy world is all about magic and witchcraft and is indeed magical.

Magic moves statues and staircases in the school, making the school feel sentient. However, Hogwarts also has its dark parts, such as dementors, murderous centaurs, and many more.

The fantasy world can also be a place of comfort for the people living in it.

Plus, the pixie dust allows him to fly around to any place he wants. Neverland is both seductive and wild, plus it has many adventures.

Therefore, you should think of what your characters need from their world when creating a world.

The James Gurney novel is one fantastic novel. If you have read it, you need to. It has a world known as Dinotopia. It is a peaceful society where dinosaurs and humans live harmoniously.

The world’s dinosaurs are sentient and can speak. However, they are cautious about being wiped out like other dinosaurs.

Therefore they do create a haven in an uninhabited land. When creating that fantastic fantasy world’s name, you need to consider the animals that inhabit it.

The Wizard of OZ: The Land of OZ

The world is more of a fairy; it has a multitude of creatures from horses to munchkins and flying monkeys that change color. OZ is simply a fantasy land with witchcraft and magic.

The world is a little old-fashioned but charming. Plus, the land is magical and surreal; it will surely capture your imagination with the right and exquisite details.

Coming up with an amazing and unique world name can be tricky. Plus, copying the already existing naming ideas is not advisable.

Several excellent techniques will help you create a unique world name. The names will surely excite and amaze your readers. Check out the different techniques.

The adjective technique is relatively straightforward. The first step is to list adjectives that relate to your novel. It can include things such as dreams, loneliness, brokenness, etc.

After selecting the relevant adjectives, you also make a list of synonyms of the word world. Synonyms are simply the words you can use in place on another world; they have the same meaning or are almost similar.

The synonyms of the word world can include realm, vales, planet, lands, empire, etc. You can also use close or loose synonyms such as an ocean, lake, woods, etc.

The final step is combining the adjectives and word synonyms. Here is the result you might get.

Using nouns is another technique and is also straightforward. Here you list some synonyms. It can include lands, nexus, lands, sanctuary, and country.

The next step is to create a list of nouns related to the fantasy novel. Here are some of the best examples: locust, frogs, angels, frogs

Finally, combine the synonyms and the nouns to get unique names. You might get the following names.

Elements To Consider When Writing Your Fantasy Book

It would be best to meet your reader’s expectations by ensuring you included some elements. The elements are not the familiar tropes such as trolls, dwarves, elves, etc.

The elements are much broader and more general, and thus you can be imaginative and inventive as you want.

It’s a crucial element in your science fiction. Fantasy stories take place in highly different new worlds. Even if your fantasy is on earth, it won’t be the actual one.

You need to thoughtfully and thoroughly develop your setting to fully immerse your readers into your fantasy world.

The process is known as world-building in the fantasy world. Literature lovers believe that J.R.R. Tolkien is the father of a world builder.

He did create the middle earth, which has extra-level detail and depth. The lord of the rings, the orbit, and many more perfectly explore the history, societal customs, and language.

However, it doesn’t mean that your work should be similar or better than Tolkien to interest your readers.

Tolkien did spend years developing middle-earth. When working on your novel, it’s best to start small by building from the ground.

The magic element differentiates fantasy fiction and other genres. A perfect fantasy story needs to have some magic.

The term magic shouldn’t complicate things. It’s simply introducing things that do not exist or occur in the real world in your story.

They include elements of fantastical creatures, enchantment, sorcery, and witchcraft. Overall, anything beyond the natural world’s logic or evidence is magic.

If your magic is intriguing and innovative, then your novel will be surely stand out from the rest in the market.

Magic needs to play a vital role in your fantasy book. It can be a means of character development, driving plot force, and many more.

3. A cast of Complex Characters

The characters are the part of the fantasy book that genuinely steals the reader’s attention. Other things engage and intrigue readers, such as the magic system, plot, and setting.

However, they aren’t necessary if the readers don’t love or care about the characters. It’s you that chooses the number of characters for your story.

However, it would be best to have several main characters and auxiliary characters for fantasy. It offers diversity and interest in the story and engages plus sustains the readers.

To sharpen the focus, you need to have a standout or main character that readers will encounter in most parts of the story.

All in all, you need to focus on creating relatable, complex, realistic, and believable characters. It doesn’t matter whether the story is taking part in the fantasy world, but your characters should appear like real people.

It means you need to develop them as such in the narrative. Lastly, it would be best to avoid clichés in your fantasy book.

Every good story usually has conflict and is a crucial element in fantasy fiction. Your characters should always have a higher stake, and the story needs to stretch across multiple series.

The fantasy world should also have an established power system like other worlds. It simply means a government; choose the person that will hold power in the world. It can be a king, queen, or single ruler.

World-building is usually so exciting but challenging for the author. Fantasy stories always give writers the chance to create fantasy worlds.

You can indeed make anything; however, after creating that wonderful world, you need to choose a name that perfectly fits it.

Also don’t hesitate to check out our free book mockup generator or our generator of titles for books.

Dr. Seuss’s books are known for their quirky characters, rhymes, and illustrations. However, the book covers are still END_OF_DOCUMENT_TOKEN_TO_BE_REPLACED

In a world bombarded with images and messages from all sides, it’s no wonder that book covers have END_OF_DOCUMENT_TOKEN_TO_BE_REPLACED

Funny novels are sometimes hard to write because humor differs from person to person. For a humorous book END_OF_DOCUMENT_TOKEN_TO_BE_REPLACED