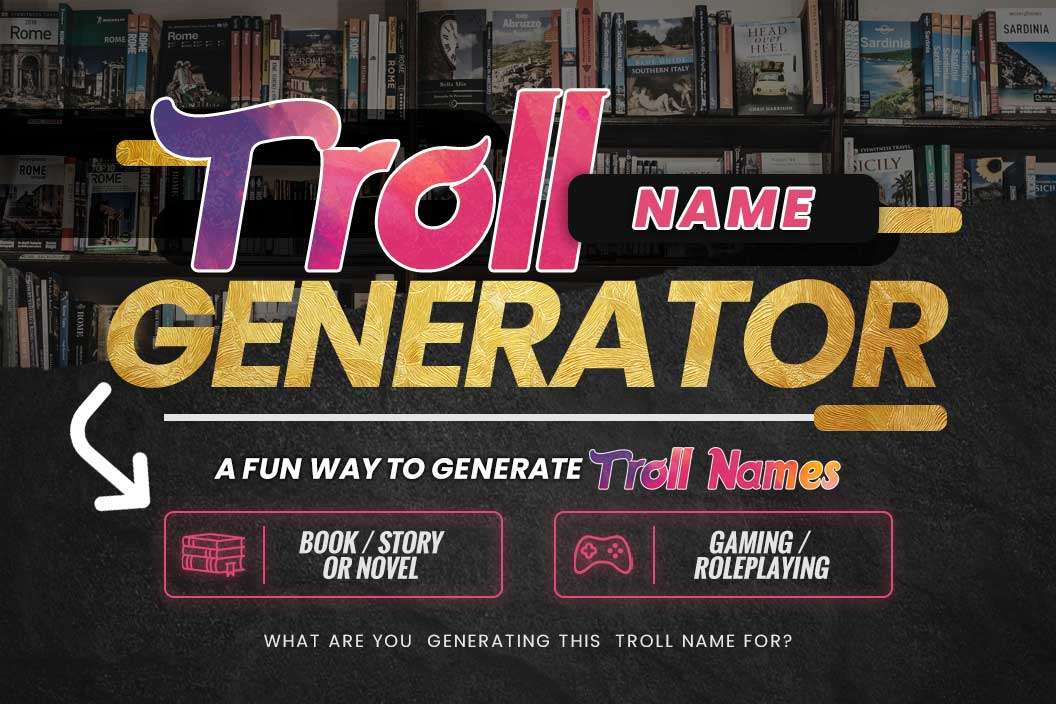 Trolls are a standard fixture in our social media apps. However, the trolls we are delving into are not the bitter bullies we imagine but mythical creatures that make fantasy fiction.

They are elusive beings that have left us grasping at straws trying to imagine them, leave alone name them.

It would be hard to name characters as fantasy fiction writers if you do not understand them. We created the Troll Name Generator to help with this.

It creates some of the troll world’s most exciting and distinct names. Not to mention the Troll Name Generator will make your work easy.

A troll is a mythological being that we can trace back to Northern Europe. Scandinavian countries, to be exact.

There are differing stories of what a troll looks like, but the common denominator is the ugly physical appearance.

Most schools of thought can agree that trolls have a subhuman appearance. However, the contention comes when discussing where they live, their height, and their physical appearance, such as size.

The Old Norse believed that trolls lived in caves around hills. They also theorized that they lived in clans of family groups but were not friendly towards humans or other species around them.

Scandinavians later delved that these trolls liked their privacy. They were not fans of humans and their cultural and religious practices.

Yet, to them, trolls could either be the ugly beings that others hypothesized them to be, or they could be human form, with barely enough troll features to distinguish them. They agreed that most trolls are dumb but only those who looked like humans.

What scientists can agree on to some degree is that trolls are Neanderthals. They have theorized that early humans encountered Neanderthals while migrating towards Northern Europe.

The exaggerated stories passed down from one generation to another gave birth to trolls. One version of the story does not invalidate the beliefs of an entire culture; only time will tell which is true.

Two types of trolls exist. These groupings are divided into two categories based on the two beliefs: Old Norse and Scandinavian.

Old Nose Troll is the first fabled tale about trolls that have been passed down through the generations. According to Old Norse, trolls are reclusive and live in two-family units.

They are considered hostile toward humans and are rarely ever seen. They prefer living in rocky areas or shelters in holes around hills or mountains.

The Old Norse considered them fiendish creatures. They were thought to be ugly with prominent facial features such as nose, jaws, and in some cases, hog-like teeth. They are physically large and aggressive towards humans or other races they may come across.

Many who speak of trolls even today describe them in this manner.

The other type of troll is those described by the Scandinavians. According to them, the trolls were humanoid.

Their lives were more like those of humans, and they preferred living in woodlands. They kept livestock and engaged in agricultural practices.

They are known as social animals that engage in social practices such as festivals. Scandinavians also believed that trolls cooked and made baked goods.

They are small in stature and dwelt in underground tunnels and holes. Their dwelling had hints of gold, and some said they had a stash of gold in their underground chambers.

These trolls were very cheeky and playful. They did not interact with humans regularly but were not considered as flawed as their Norse friends. They practiced the adage “treat others as they treat you’ or something along those lines.

This saying, however, did not apply to stealing. Scandinavian trolls were notorious thieves, especially regarding food from human stores.

They believed that they had invisible powers that could be activated when they wanted to rob some poor farmer or just wanted to be cheeky and prank others.

According to legend, the great Thor was a great huntsman of trolls. He could throw his steel hammer known as Mjolnir and kill vulnerable trolls.

Many characteristics can identify a troll. We will split into two main groups for this article: bodily appearance and social life.

Trolls are categorized into two classes regarding their physical appearance: the giants and the little troll.

The giant trolls are hulking beings taller and bulkier than humans. Generally, their appearance is shaggy and messy. They have long, messy hair, and their bodies seem to have vegetation growing out of them and ragged clothes.

They are also regarded as unsightly because of the absence of facial features such as eyes.

Little trolls, on the other hand, are a bit different. The giants are large and hefty, but the smaller trolls are tiny and delicate.

They resemble humans in most circumstances. They are viewed as unattractive because of the lack of facial characteristics such as eyes. They can be mistaken for humans if they dress in clothes that hide their tails.

These two types of trolls also have different social lives. The giant troll desires a life of isolation, preferably without human interaction. They will spend their lives around mountains and hilltops to avoid contact with humans.

They have no governing system, and even if they were to choose a leader, they would act like a bully to the rest of society. Since they live in small units of two, a regime is highly unlikely.

They also dislike organized religion, especially Christianity. If they met up with a Christian, they would assault or abduct them.

The little troll does not interact with humans but is much friendlier if an encounter happens. With their invisibility power, they can hide from humans if they wish to. They can also sneak into human houses to pull pranks, steal, or observe them.

They also spend their time farming and working for their daily bread.

Typically, trolls can be plundering creatures, particularly the giants. They will attack merchants and villagers along isolated roads and steal their food and wares.

Including a troll character in your work requires a unique name that brings terror to the reader or arouses interest. Either way, here are names you can use:

Girtablilu is a great name to consider for that tall character. It is hard to pronounce yet tells the reader what they experience. Girtablilu is a Mesopotamian name that means a troll with a human trunk and scorpion limbs.

Ogre may not sound like a name, but it is a fitting one for a troll. It describes a human or being who is monstrous and ugly and lives around a mash or a swampy area.

If you have a monstrous troll character in mind, then this is the name for them. This name describes a troll that is half goat and human. It is derived from the Greek mythology creature faun.

Anubis is not a new name, and it has been used in some books and movies. But it is still a fascinating name that you can use for male or female troll characters. Anubis is a deformed humanoid being with the head of a fox or dog-like creature.

It is derived from the Egyptian mythological god of death.

Ciguapa is a Spanish name that befits a troll. It is feminine but can be used on male trolls as well. It is based on Dominican mythology about a troll with legs on the opposite side of the body. Ciguapa considered hilly and rocky environments to be home to these creatures.

Aigamuxa is an unusual name that will create a sense of suspense around a character. It is African in origin. However, you can also find the name in some European cultures. We can find this troll in deserts and other barren lands.

As far as giant trolls go, this name takes the cake. It describes a giant troll, large enough to eat a human and swallow him alive; what a name for a terrifyingly tall character.

Trolls have names for different cultures, and this name originates from India. It also contains a hit of Persian. This name describes a horrific creature with the head of a human with the body of a lion. To top everything off, it has a scorpion’s tail.

Trolls are just as fascinating as any other mythical creature. They add flavor to the flow of a fantasy novel or movie. If you want to include a troll in your plot, use the Troll Name Generator. It will make your work easier.

There’s no need to put yourself through the stress of coming up with names when the Troll Name Generator is here to help.

We hope you found this article enlightening and will use some of the names on your characters. Enjoy using the Troll name generator and be inspired to create a masterpiece in your upcoming novel, play, or short story.

Dr. Seuss’s books are known for their quirky characters, rhymes, and illustrations. However, the book covers are still END_OF_DOCUMENT_TOKEN_TO_BE_REPLACED

In a world bombarded with images and messages from all sides, it’s no wonder that book covers have END_OF_DOCUMENT_TOKEN_TO_BE_REPLACED

Funny novels are sometimes hard to write because humor differs from person to person. For a humorous book END_OF_DOCUMENT_TOKEN_TO_BE_REPLACED