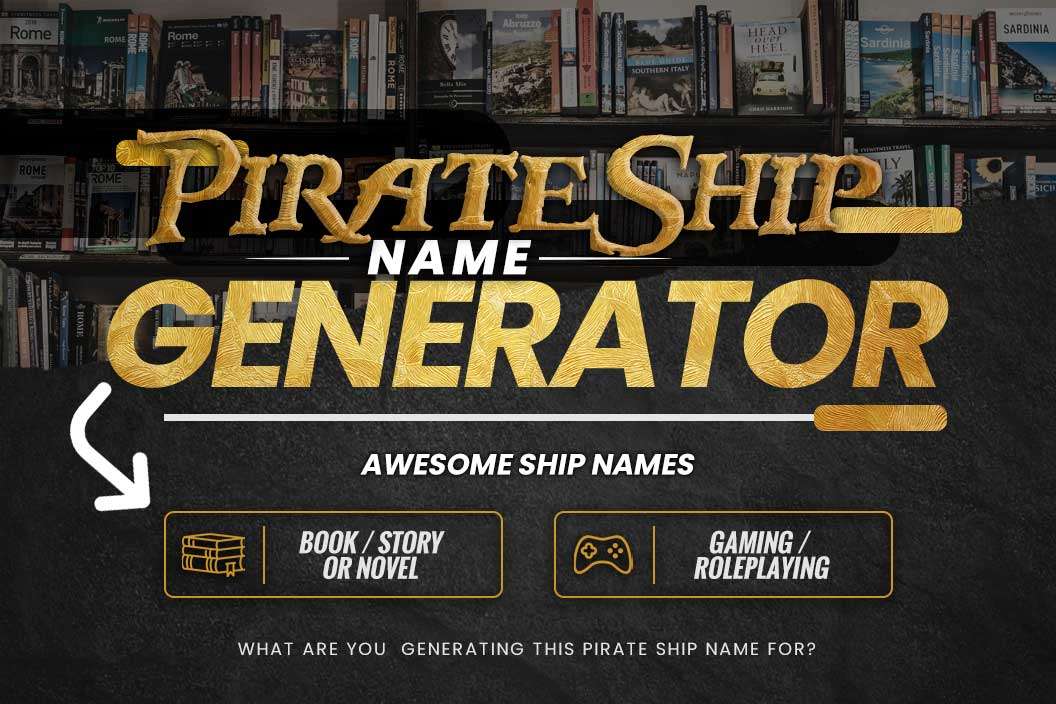 Pirates’ stories are usually fantastic, and people of all ages, from children to adults, love them. The ship name is as important as the character names for pirate stories.

The ship name needs to excite your readers and set your story’s tone. For example, if the story is about a treacherous and scary pirate crew, the ship name should be able to send shivers to your readers. The Pirate Ship name generator will make your work exciting and will keep the readers excited and willing to follow the plot.

Pirate ships have come in different sizes and shapes. However, their names do not differ significantly; the pirate ship name generator will also help you get your book’s proper pirate ship names.

It has hundreds of options; you’ll find it here if you are looking for a different unique name.

History is fantastic, and people love it. Piracy also has a golden age, and it was roughly between 1700 and 1725.

During this time, thousands of pirates did terrorize different shipping lanes globally, specifically the Indian and Atlantic oceans.

Who Is A Pirate?

A pirate is simply a robber that travels by water. Generally, pirates made target ships but some launched attacks on affluent coastal towns.

You should note that there isn’t a thing like a pirate ship. It’s because, in existence, there has never been a shipyard that specifically sells such ships.

However, it’s any vessel with sailors and crews who took part in piracy. Pirate vessels can be anything from a raft, canoe, etc. the pirate could use canoes or small boats when there wasn’t an option.

How Pirates Acquired Their Ships

There was no person or company exclusively making ships for piracy. Therefore the most popular way pirates got ships was by capturing the existing ones.

Pirates were usually crewmen on merchant and naval vessels, and they took over the ships through mutiny.

Other pirates did ship trade-in; after capturing a more seaworthy ship, they would exchange it with their own. Some brave pirates could steal ships, and a good example is Calico Jack.

Factors Pirates Considered In A Ship

An excellent pirate ship needed to be fast, seaworthy, and well-armed. A sea-worthy ship was essential, especially in the Caribbean, which had devastating hurricanes yearly.

Pirates did not have the luxury of using the best harbors and ports. Therefore the only option was to ride out sea storms. Plus, speed was so important to help them run down their prey.

Outrunning navy ships and pirate hunters were necessary. Another thing is that pirate ships needed to be extensively armored to win fights easily.

Some famous pirates with massive gunboats were Black Bart Roberts, Sam Bellamy, and Blackbeard. Their pirate ships were usually successful during piracy activities.

Smaller sloops were advantageous, too, it’s because they were quick and could navigate shallow inlets. These made it easier for pirates to evade pursuit and hide from searchers.

Small ships were best when it came to “careen.” You are wondering what the term “careen” means. It was simply a maintenance practice.

The pirate could intentionally beach their ships to clean the hulls. It was easier to do “careen” on smaller ships than bigger ones.

What Pirates Did With New Ships

As mentioned, pirates got new ships by either swapping or existing ships out or stealing another one. After acquiring a better ship, the pirates usually made some changes.

They would add as many cannons as possible while ensuring they do not slow it down. For the pirates, the least number of cannons on board was six.

They also adjusted the rigging and ship’s structure to make it faster.

Pirates then converted cargo spaces to sleeping or living quarters. The pirate ships usually had more men than cargo on board.

The one common thing for all pirate ships is they were not bought or sold as pirate ships. Pirates stole them for piracy purposes and made adjustments to them.

The pirates increased space on the ships for larger crews and cannons by doing away with cabinets plus changing sail arrangements.

During pirates’ golden age, the sloops were the most famous ship choices. The golden age was in the 16th and 17th centuries, and piracy was widespread in the Atlantic, the Caribbean, and Indian oceans.

Sloops were built in the Caribbean region and easily customized into pirate ships. It had a large bowsprit that increased the canvas area, adding maneuverability.

The main advantage of sloops is they were quick and thus easy to attack and get away with. Their top speeds were over 10 knots. In addition, the ships could hide in shallow waters to escape warships.

It’s another shallow draft boat and was popular in the Mediterranean. Privates loved it because of its incredible speed and maneuverability.

Some brigantine designs had oars which were helpful during low winds. Brigantines were ideal for more prolonged battles since they had greater firepower and larger hold. It has the capability of carrying over one hundred men.

It was also a pirate’s favorite, and like the sloop, this boat was fast and easy to maneuver. It could carry several cannons and guns.

It had a shallow draft and narrow hull that made it easy to hide in shallow estuaries. Its only disadvantage is that it couldn’t hold much crew and booty.

They weren’t the perfect merchant ships, and they had three masts and large square sails. Its large hold made it relatively slow but ideal for longer crossing.

Because it wasn’t so agile, the pirates didn’t rank it under their best first choices. Square-rigged ships were ideal for stealing large booty amounts. You could see the ships, in particular pirate fleets.

The ship had a fantastic Spanish design. It could perfectly carry cargo and also defend itself. The ship was big enough to carry 200 people and held more than 70 guns and canons.

On the downside, the ship was slow and difficult to maneuver because of the large square sails. It indeed made fair game for all pirates.

The ship’s design was perfect for carrying large cargoes. Its bottom was broad, solid, and flat. However, it wasn’t relatively swift considering its weight of 300 tons.

The ship had a lot of space that pirates could customize with guns and ships. However, most pirates were after the ship’s cargo and not the ship.

Bartholomew Roberts was a famous French man. All his ships, if not all, were named Royal fortune.

His largest cannon were big enough for 157 men and had 40 cannons. He died in his ship in a battle that happened in February 1722.

If you love pirate stories, then you’ve heard about Blackbeard. He is a famous pirate who captured La Concorde in November 1717.

The massive French ship was for transporting enslaved people. Blackbeard renamed the ship Queen Anne’s Revenge. He made some adjustments to it, like mounting forty cannons.

It was among the most potent ships and could match British warships during its time. In 1718, the ship ran aground and sank; however, some historians claim that Blackbeard sank it intentionally.

According to records, the shipwrecks were in North Carolina waters. Parts such as spoon, bell, and anchor were found and displayed in museums.

It ranks among the famous pirate ships for various reasons. In 1717, Bellamy did capture the massive ship while on her maiden voyage.

He did several modifications to it by adding 26 cannons. Whydah was damaged not long after its capture. Therefore Bellamy didn’t do much harm with it.

A researcher found the shipwreck, and it has several interesting items for pirates’ history and culture.

The pirate name generator will help you find the perfect ship name. However, you also need to know ways to create pirate ship names. The best technique is picking an adjective and combining it with a pirate-related word.

Some of the examples include Jolly Skull and Dazzling Pearl. Here are some of the common pirate ship names.

Pirates were widespread during the 17th century and depended on ships for survival. They needed fast, strong, and well-armored ships for a heist to succeed.

Pirates mainly acquired these ships through stealing and trade-in. They could then modify the ships to meet their specific needs by adding cannons guns and increasing space.

There have been many famous pirates and thus many pirate names in history. With the pirate ship name generator, you will find the perfect name for your ships.

Also if you like free author tools and software, you might be interested in our creator of free eBook cover design or title generator for stories.

What makes a book cover cool? Although there’s no definitive answer to this question, a few factors might END_OF_DOCUMENT_TOKEN_TO_BE_REPLACED

Creating book covers is an essential part of the publishing process, and a lot of thought goes into END_OF_DOCUMENT_TOKEN_TO_BE_REPLACED

Think about it – when browsing through a bookstore or online, what makes you pick up a book? END_OF_DOCUMENT_TOKEN_TO_BE_REPLACED