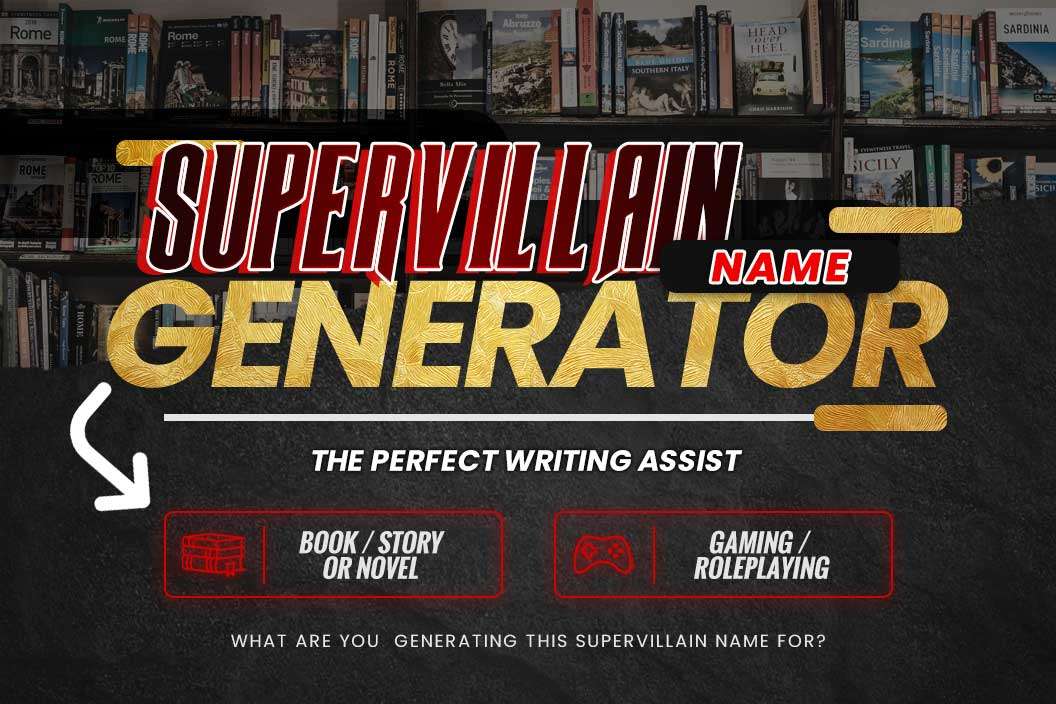 A superhero story is only as good as the supervillain. The stories are not only captivating, but the narrative twists keep readers on the edge of their seats, making them need more.

The name of a villain should amplify their persona and should have specific meanings. They should elicit a sense of power or threat. It takes effort to create these characters, and the correct name should emphasize the subject’s traits. In this case, you might consider using a Supervillain Name Generator.

Many creatives come up with fantastic storylines to ruin the tale by giving its characters unsuitable names.

It dilutes the characters’ personalities and makes the book or film less engaging. Choosing the right supervillain name has a lot of power.

How do you keep the characters engaging in that case? Make your character’s names with the Supervillain Name Generator.

The tool is designed specifically for creative authors. You’ll get access to thousands of good suggestions when using the Supervillain Name Generator.

Supervillains are the characters that we all love to hate. They are also the most compelling characters for writers to develop. As a writer, you can channel your creativity onto villainous characters.

Supervillains are not all the same, neither do they play similar roles in a story. Sure, they keep the protagonist on their toes, but they evoke varying emotions from the audience. The perfect villain doesn’t necessarily have to be a loathsome character.

The difference between a villain and a supervillain is that they present an actual challenge to the hero. They don’t necessarily have powers, but they are formidable.

Here are the types of supervillains:

The most enjoyable character to write is the wicked genius. As their name implies, they are very clever and tactical in planning nefarious activities. These individuals devise complex plots to inflict devastation on their unsuspecting targets.

Their main flaw is blabbing their intentions to the hero because of their overconfident demeanor. They frequently fail or are halted in their tracks due to their schemes being too convoluted.

A supervillain seeks vengeance on a superhero or the world for how he was treated. In most circumstances, these characters think that they have been mistreated, but their beliefs are, in most cases, incorrect.

Characters in the Vengeance arc nearly always wind up being consumed in their rage. These characters are so focused on retribution that they refuse to consider all sides of the argument. Vengeful supervillains have drab and unsophisticated personalities.

The henchman is only a supporting role. He is the primary antagonist’s, right-hand man. They are usually meek and obedient, following the evil character’s orders to the letter.

Henchmen are necessary since they emphasize the primary villain’s characteristics and personality.

Typically, henchmen serve as the muscle. They destroy anything that is in the path of their lord. Due to their lack of knowledge and dimwitted disposition, these sidekicks can be amusing at times. A story can have several henchmen.

These are aliens from the furthest reaches of the galaxy. The plots of alien villains usually revolve around their conquering the planet and claiming it for themselves. The purpose of these fables is to emphasize the superhero’s unrelenting spirit.

Extraterrestrial villains are generally physically and technologically superior. They are formidable, but one thing they lack is a never-say-die attitude. Despite the minimal chances of such an occurrence occurring, they are conquerable.

The extreme is a character who will take tremendous measures to further their ideas. They wreak a great deal of pain on innocent bystanders or those who do not believe in their visions. Extremists have a one-track mind and cannot be persuaded to modify their opinions.

Thanos was so hell-bent on creating a viable cosmos that he annihilated half of life in it. He is an example of an extremist supervillain. Evil characters are unconcerned about who suffers due to their selfish desires.

The anti-hero is a figure who the audience adores and, in the end, can identify with. The anti-hero is wicked because of circumstances, not because he wants to be. In most situations, the anti-hero realizes their mistake and returns to the correct path.

An example of an anti-hero is a bank robber wanting to collect money to pay for a loved one’s hospital bills. It might also be a Robin Hood figure attempting to have a beneficial impact on society. To write a successful anti-hero character, you must make them look sympathetic to the audience.

The backstabbers are some of the most dangerous supervillains. They are masters of manipulation who use their charms to get on the character’s good side. Most stories with backstabbing characters make for great plot twists.

Backstabbing characters are dangerous as they know everything about the superhero. They might, even at one time, have been the hero’s sidekick.

Best Supervillain Characters Of All Time

Authors have managed to craft some brilliant evil masterminds over the years. These genuinely evil characters bring great destruction to the world or push the protagonists to their very limits.

Supervillain characters should have dark personas. Their names should evoke feelings of anger and fear. The audience should be on tenterhooks every time their names appear in the book.

Some writers have managed to capture supervillains in all their likeness.

Here are some of the principal characters.

For a character that lacks superpowers, the joker is truly dangerous. He is inarguably the greatest supervillain of all time.

The dark and twisted character walks around with clown makeup on his face, amplifying his demented persons.

The joker is a mentally unstable character who, time and again, escapes from Arkham Asylums to bring chaos to Gotham City. The protagonist, batman, is, on most occasions, barely able to stop him in his tracks.

Lex Luthor is a corrupt billionaire in Metropolis. His greatest desire is to destroy superman via whatever means necessary. Lex sees superman as the greatest threat to humanity, despite saving the world on several occasions.

Lex’s greatest asset, which makes him genuinely formidable, is his intelligence. He falls in the category of an evil genius type of villain. He is also able to use his sizable fortune to his advantage.

Loki is the protagonist in the Thor series. He is also featured several times on the Avengers, a popular Marvel franchise. Loki is brother to Thor; both are the sons of Odin.

It is easy to see why Loki is an excellent villain. He is the god of mischief. He causes chaos through his deceit. Loki is the type of character to betray anyone, including his father.

Determined and fundamentally flawed: these are words befitting the character responsible for wiping out half of life in the known universe. He is an idealist in his own right, and no one can change his mind.

Thanos is an extremist type of supervillain. In his heart of hearts, he believes what he does is necessary to the sustainability of life in the universe. He doesn’t care who gets hurt in his quest for glory.

Darkside is a character that epitomizes everything dark and evil. He is a conqueror of worlds.

He has wreaked havoc across the universe, collecting planets as though they were stamps.

It takes the effort of all the key characters in the justice league to keep him from entering the earth. It is unimaginable the type of destruction he would have done on earth.

General Zod is one of the surviving Kryptonians. He is a character who was exiled from Krypton because of his radical ideologies. He is relentless in his quest for revenge on Jor El’s son, Kal. Zod is an egotistical character who expects to be worshiped like a god.

When choosing supervillain names, you want to avoid sounding overly generic. A complicated name makes it seem as though you are trying too hard. Here are some suggestions.

For a story to be intriguing, the character names must be perfect. This is especially true when attempting to encapsulate larger-than-life figures. As a writer, you want to give your characters names that reflect their personalities and attributes. Using the Supervillain Name Generator you will be able to bring these characters to life.

The tool is simple to use, but it also makes intuitive and valuable recommendations. The Supervillain name generator will help you find the best names for your characters in a few minutes. Check out the writing aid since it will drastically enhance the names of your characters.

What makes a book cover cool? Although there’s no definitive answer to this question, a few factors might END_OF_DOCUMENT_TOKEN_TO_BE_REPLACED

Creating book covers is an essential part of the publishing process, and a lot of thought goes into END_OF_DOCUMENT_TOKEN_TO_BE_REPLACED

Think about it – when browsing through a bookstore or online, what makes you pick up a book? END_OF_DOCUMENT_TOKEN_TO_BE_REPLACED