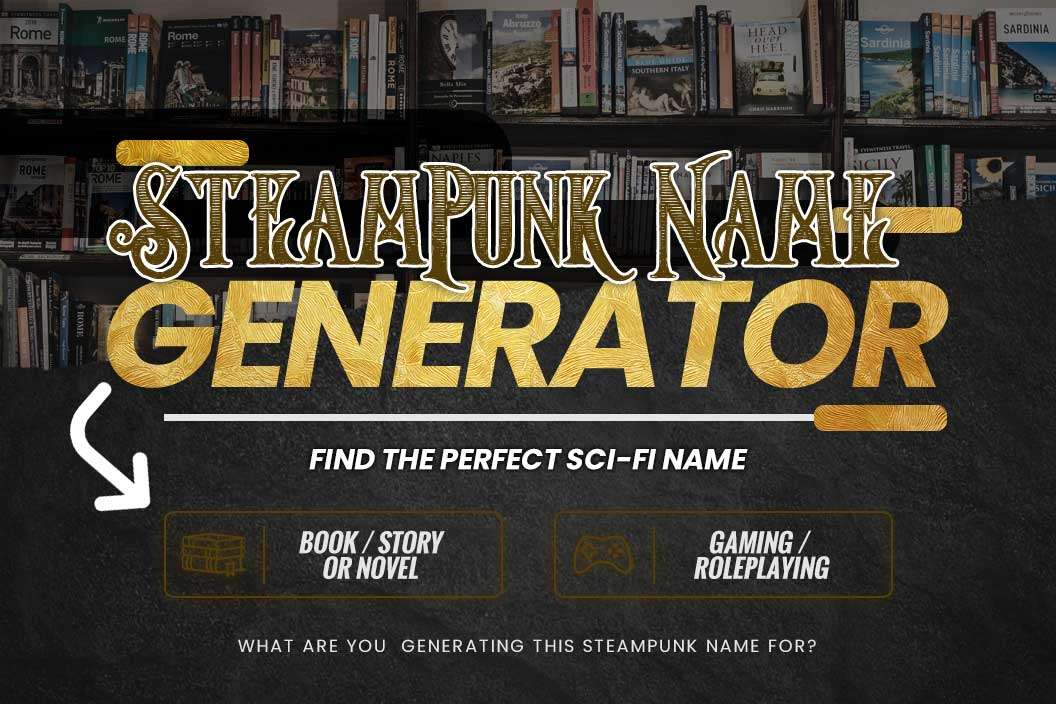 Think of Steampunk and Wild Wild West come to mind. Steampunk is a sci-fi genre that blends the past and the future.

It is a futuristic Victorian era with hints of industrial machinery parts. In general, it is a combination of retro styles and futuristic modes.

This subgenre is very intriguing, and a science fiction work based on it will keep the reader captivated.

However, coming up with names is a challenge. That is why a Steampunk Name Generator is crucial. It will generate numerous names in an instant.

The names created by Steampunk Name Generator are carefully chosen to reflect the personality, history, and identity of the character or location.

This article explores Steampunk and some names you can use.

Steampunk has been in existence for a while. It comes in different forms of art; books, movies, and even paintings.

However, this genre can be traced back to the 19th century. The Steam Man of the Prairies is a science fiction novel by Edward Ellis.

Although it is not considered a steampunk work of art, many have hailed it as a precursor. Numerous authors have used the same style as Edward Ellis; however, they did not name the genre until the late 50s.

A writer named Mervyn Peake wrote books considered the pioneers of Steampunk. Titus Alone is one book among three that engineered Steampunk as it is known today.

It follows a boy who ventures outside his home to discover the world. He stumbled upon a city that can be described as Steampunk.

Other writers who have also ventured into Steampunk include Michael Moorcock, a 70s writer who wrote a book that inspired movies such as The Adventures of Luther Arkwright.

There are numerous paintings and artworks as well. The latest Steampunk movie is Sherlock Holmes: A Game of Shadows.

Nonetheless, Steampunk was not a term used in the earlier days of this genre. Several other names, including cyberpunk, referred to the style of writing promoted by the likes of Moorcock. Kevin Wayne Jeter minted Steampunk.

He is an author that specializes in horror and sci-fi. He described his works and those who wrote books in the same genre. Morlock Night (1979) and Infernal Devices (1987) contained the steampunk subgenre.

Although they did not take this term back seriously, it has become more than just an art genre. It has been built into a subculture.

Steampunk has formed a culture around itself. It has moved from being a minor sci-fi genre to a subculture that encompasses music, fashion, art, DIY projects, and so on.

A deeper look at this form of expression and one will notice influences ranging from the 19th-century Victorian era, steam industrialization in the 18th century, and some modern-day influences. Some have coined it neo-victorian.

Although Steampunk is considered a subculture, it has grown to include other subcultures and will soon be a culture in itself.

The teens, young adults, and older generations of Steampunk are making headway in advancing their ideologies.

They have created magazines, music, and even events that celebrate this culture.

There is a growing number of steampunk foe yards who want to be at the center of politics. They lament the lack of technological progress in the culture, and some have watered down their beliefs to dress up and have fun.

Although this stance has been controversial in the community, they continue to grow with some goths and cyberpunk joining.

Although most of the community would like to ignore it, politics has roots in this culture. A disgruntled section of Steampunks believes there should be an alternate political system for those who believe in a Steampunk world.

Some would argue that Steampunk is not about ideologies and philosophy but fun, entertainment, and fashion.

It is hard to tell the path steampunk culture will take. Unfortunately, the momentum has slowed down in recent days, and many see the culture has been watered down to conformist. They believe the ‘punk’ element has been left out of the community.

Whatever the outcome, Steampunk remains relevant in science fiction.

Steampunk has been confused with other sci-fi subgenres such as cyberpunk. However, Steampunk is a genre on its own and has identifying characteristics. Let us explore some of these characteristics.

Steampunk is identified with themes that date back to the Victorian era or the beginning of the steam-driven industry. It also has elements of modern-day modes as well as futurism. That is notable in the fashion and machinery they use.

Still, modern-day Steampunk will compass styles that they consider quaint or classic. It is not odd to find styles from the 20th-century feature in this agriculture.

Steampunk is a culture that exists outside what we know today as electricity. It was built upon an era that used natural fuels to power its machines. A steam-powered train or machinery would fit in this subculture.

As a sci-fi writer, this presents an opportunity and a challenge. The opportunity is creativity in powering a city or a machine, while the challenge comes in limited energy sources outside electricity and petroleum.

It is not Steampunk if technology is not part of the plot. As we know, Steampunk encompasses past, present, and future elements.

Technology should be part of this tale. It should also involve gadgets that would not have existed then and, in some cases, do not exist now.

These technologies should also be powered by electricity or modern-day fuel sources. Steam is usually the mode; however, one can use creativity in finding an alternate power source in their writing.

Technology is the story’s focal point; it is either the villain’s weapon or the saving power.

Steampunk themes are also identified by the prevailing materials used. These materials were common in the past yet are still functional in the modern world. The most commonly used materials include brass, copper, and wood.

They can use these materials to build horse-drawn carts or machinery powered by steam and coal.

Copper is essential for pipes and vehicle bodies. They can also use it to locate individuals who are missing body parts. That makes for an exciting story with a surprising twist.

An epic steampunk storyline includes romance. The element of romance should bring back chivalry and ladylike manners. That is a way of including simplicity in an already chaotic and unrecognizable world.

In the end, they should not set all the storylines in a specific era or time. Incorporate different time themes as well as values. This way, it becomes exciting and charming to the reader.

Finding the right name for a character, city, or people in sci-fi steampunk writing can be challenging. The names should both reflect the theme and entice the reader. Here are a few recommendations to get you started:

Arthur is an interesting name, especially for a steampunk character. Its use is generally for men, and it comes from the English word that means noble and distinguished.

The name Derkhan sounds mystic and unique. It can also be a name to consider while naming steampunk characters. There is no known meaning to the name, but a character in the novel known as Perdido Street Station plays one of the leading roles.

Asriel is a beautiful name that speaks of character and mystery. It is a Hebrew name derived from novels known as His Dark Materials. The name means Gifted of God.

Nemo was not a common name until ‘Finding Nemo’ was released. However, this can also play as an exciting steampunk name. It has Latin origins, and it means nonentity.

You have heard this name repeatedly, but it is also a good name in steampunk culture. It comes from the German language, which means honor-bright.

Liang is an excellent option if you want a unique name with oriental leanings. This feminine name is best for a character with a soft nature. It is a Chinese name that means bridge.

Edwarda is another steampunk name given to female characters in sci-fi works. It is originally an English name, and it means a protector of means.

Josephine is not a new name in the market, but it is still a steampunk name with a beautiful ring. It is from the genre language, and it means God shall thrive.

Consider giving this name to a female character in a steampunk book. It is a beautiful name to give to a protagonist as it means ready protector. It has its origin in Dutch.

Steampunk is an exciting subculture going through a transformation like no other. Despite setbacks and criticism from some quarters, it remains a formidable opponent. A sci-fi book with steampunk inclinations has its roots in today’s world.

Thanks to the existence of a name generator, you no longer have to struggle to come up with steampunk names. The tool makes excellent and valuable recommendations.

A Steampunk Name Generator is a crucial tool, especially for a writer. It will generate the names you need in seconds. We hope this article has been of help and consider using the Steampunk name generator in your upcoming work.

In the world of notebooks, spiral notebooks never go out of style. Despite the existence of digital notebooks, END_OF_DOCUMENT_TOKEN_TO_BE_REPLACED

As an author or publisher, you’re accustomed to using the power of words to captivate your audience’s interest. END_OF_DOCUMENT_TOKEN_TO_BE_REPLACED

An electronic device that embraces portability and functionality, that’s what defines iPads in our world today. They’re a END_OF_DOCUMENT_TOKEN_TO_BE_REPLACED

If you’re looking for a cost-efficient solution for your print projects, you’d want to try publishing your content END_OF_DOCUMENT_TOKEN_TO_BE_REPLACED