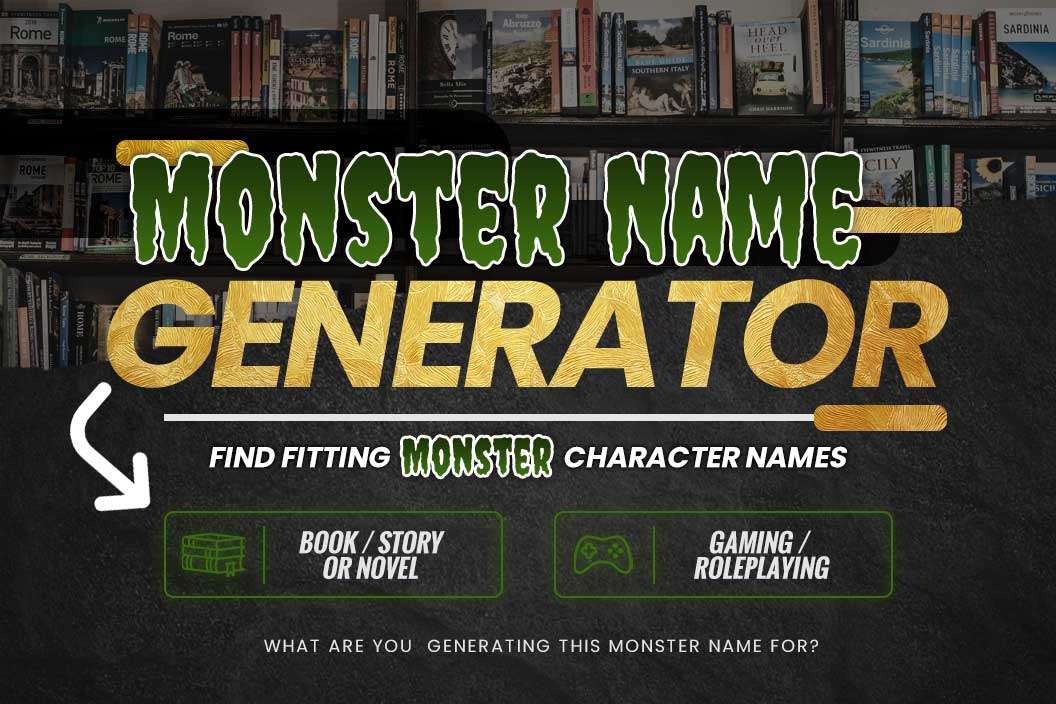 When you think of monsters, scary comes to mind. In most cases, this is true. However, Sesame Street taught us that some monsters could be cute and cuddly.

What defines a monster is relative. The majority of the so-called monsters are unrecognizable to us.

Monsters are a great addition to fiction works. They have no set definition, and most of the description is up to the writer’s discretion.

It can be hard to name a monster character, but things have become more accessible with the internet. Thanks to the Monster Name Generator, you no longer have to struggle to come up with monster names. This generator makes excellent and valuable recommendations.

Tools like the Monster Name Generator are a great addition to your writing journey.

Monsters are extraterrestrial or unusual creatures that exist outside of the natural world. In most depictions, they appear evil, out to harm humans and cause havoc. They are horrific looking and can be humanoid or utterly different from what exists on the earth.

Some works show aliens from other planets, ghosts, or simply humans with disfigured faces. They can also be a creation of human depravity or immorality.

Some tales of monsters speak of bestiality, while others show what mad scientists can create, like the case of Frankenstein.

Humans can give birth to monsters as a curse or a consequence of their disobedience to a higher power. Medusa is one such case of a humanoid monster with snake-like hair.

Other monsters are good-natured though their appearance judges them. Some tales depict monsters who prefer to live in seclusion but are persecuted by curious humans. Due to the stress, these monsters destroy humans and their environment.

It’s just that they’re misunderstood. Monsters are not a new phenomenon; they have existed since the dawn of time. It doesn’t matter which culture or religion; monster tales are a common feature in all of them.

Monsters have no definitive history. They can be found in various cultures dating back thousands of years.

Some people believe God sent them to punish them. The Latin words ‘demonstrate’ and ‘monere,’ which mean demonstrating and warning, create the monster.

Any person or being born with deformities in the past was considered a monster and a punishment to the parents by God.

However, as we have seen human culture progress, the definition seems to be less about a being and more about its actions. There are lines that the scientific communities have tried to cross in the name of science.

To ‘ improve humans ‘ ‘ has many tongues wagging, trying to merge the DNA of different species to ‘improve humans.’

Even politicians acknowledge the threat that such steps pose to the integrity of humanity. Genetical engineering is a subject that is approached with caution because there is a possibility that we can create monsters if geneticists are not regulated.

The origin of monsters is still a mystery, and one has to wonder if humans are not real monsters. There is no irrefutable evidence of monsters outside of folklore and partial fossil discovery.

Most of the stories and movies show monsters as creatures with large physic. In most cases, they are more significant than humans with superhuman strength. Some may be the size of an average human, but their appearance makes them look larger and scarier.

Even as monsters are more extensive than humans, they are also powerful. They can carry massive objects or quickly destroy a building or structure; that may be due to physical strength or supernatural forces. Frank’s engine is an example of a monster with strength and colossal body size.

Monsters are usually unappealing as far as looks go. Their bodies are deformed, and their facial structure is unlike most people.

That is not the case with some monsters. Dracula was considered a monster even though his monstrous side was based on his actions. His physical appearance, though different, was not considered ugly.

Monsters are also considered mentally as low and dense. They may have the strength and a bulk physical appearance, but they do not possess the mental capacity to outmaneuver humans. Though a loved monster, the Hulk is not considered the brightest bulb of the bunch.

Some monsters brag about their arrogance and pride, proclaiming superior to those around them. The monster Medusa is an example.

She believes she has abilities that no one possesses and uses that to her advantage against humans and all those against her.

Monsters have the uncanny desire to be all and possess all. They have strength but want to be the strongest, wealthy, yet seek to take from everyone else.

A food example is vampires who have lived for thousands of years, yet they kill others not just for nourishment but also for more power.

Monsters are different and cannot be easily categorized. Their different appearances make it difficult to group them into different factions. However, you can categorize them according to their typical behavior.

These are monsters that display intelligence that is otherwise not common to monsters. Most of their actions are calculated, and to their detractors, may seem harmless. They usually appear as normal humans but are out to benefit from other humans.

They can be destructive, but not in an obvious way. Vampires and werewolves got this bill.

Monsters in this category are usually cursed into existence. They could be normal humans who come into contact with supernatural beings who curse them. Such a monster is portrayed in the movie Beauty and the Beast.

In this story, the heroine saves the beast by turning him back to a man. That is not always the case in other stories. As far as myths go, werewolves fall in this category as well.

These are creatures that do not know the difference between good and evil. They only act according to their immediate needs and harm those around them. Beasts are more intelligent than usual animals but cannot be compared to humans intellectually.

They are also more robust and extensive than humans and are led by animal instincts. King Kong is a fitting case.

Humans have played the role of monsters very well lately. It is not just a matter of myth anymore. A monster of this type is a human who finds pleasure in harming others. Those who cross the line with them will be tortured, maimed, and killed.

Serial killers in the modern era are an example of this type of crime.

There are a plethora of monster names from which to choose. Any work of fiction can accommodate a variety of ideas. Here’s a list of names to get you started.

Cetus is a beautiful male name that has a mystical feel to it. It originated from the Greek, portraying a monster killed by Hercules and Perseus. The name means a monstrous sea animal.

That is another name that can work well for a monster character. It is derived from old English and describes a female figure. The name means the falling place of chalk, and in some cases, it means peace.

Aiden is a great name for a great character. If you have a monster character in mind, then consider Aiden. It is best for a solid, fearless character, feisty and tiny. It comes from Irish culture and is from the Celtics.

Hecate is a name that can give you chills. As much as it is an intriguing name, the meaning is more sinister. It is a name given to the goddess who practices mysticism and necromancy. The name comes from Greek, and it means an ominous prophecy.

As beautiful as it sounds, Lilith is a name befitting a monster. This name comes from an alternative version of Adam and Eve’s Bible story. According to this version, Lilith was the first woman to be created, but she rebelled against God. This name means twilight spirit or ogre.

That is another feminine name for a monster character. It comes from a mythical story about the daughter of Demeter. Persephone means to destroy and carnage, and it comes from the Greek language.

That is a female name that comes with a lot of personalities. Shabina means the middle of the storm. It comes from the Arabic language.

Monsters make a great addition to stories and folktales. They create an air of terror and intrigue. Most humans are, to some extent, obsessed with monsters and what they mean to our society. They may be scary in appearance, but some are sweet, like Elmo and the cookie monster.

A monster name may not be easy to come up with, but you can come up with many within a few minutes with a bit of research. That is why a Monster Name Generator is essential. It can generate hundreds of names within moments. This name generator is a great tool as it issues creative and practical monster name suggestions.

Enjoyed using this Monster name generator? If you’re looking for more random name generators for your fiction, check out our collection of Fiction Name Generators here.

Also explore the author tools we offer such as our easy-to-use creator of eBook cover and our novel name generator.

In the world of notebooks, spiral notebooks never go out of style. Despite the existence of digital notebooks, END_OF_DOCUMENT_TOKEN_TO_BE_REPLACED

As an author or publisher, you’re accustomed to using the power of words to captivate your audience’s interest. END_OF_DOCUMENT_TOKEN_TO_BE_REPLACED

An electronic device that embraces portability and functionality, that’s what defines iPads in our world today. They’re a END_OF_DOCUMENT_TOKEN_TO_BE_REPLACED

If you’re looking for a cost-efficient solution for your print projects, you’d want to try publishing your content END_OF_DOCUMENT_TOKEN_TO_BE_REPLACED