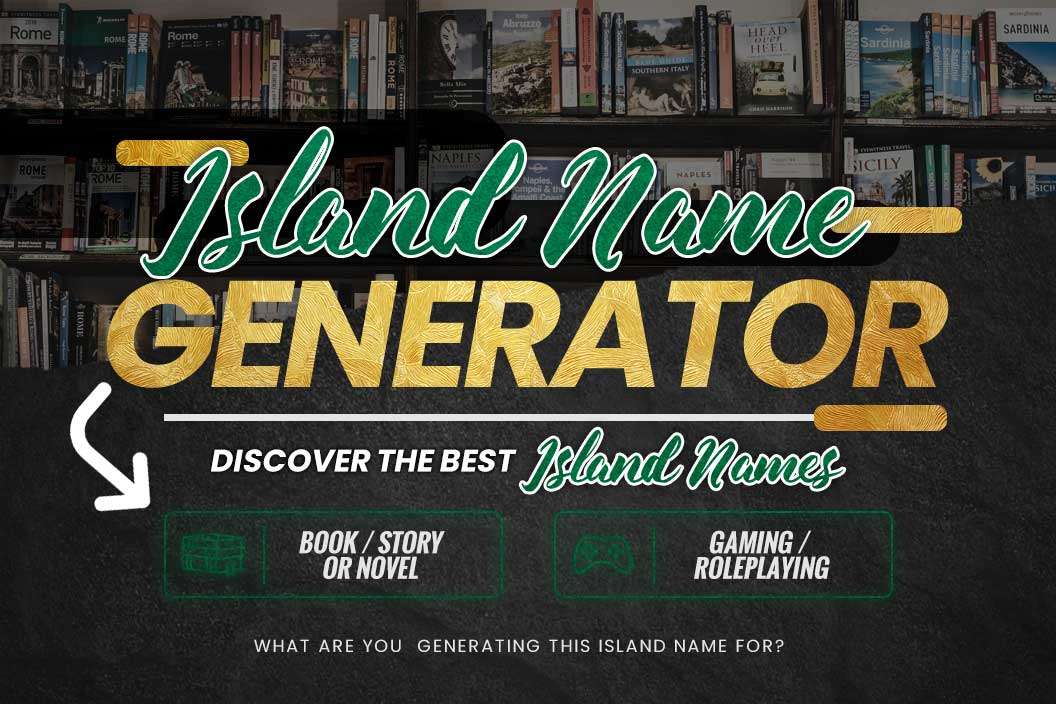 The selection of names is critical as it defines the identity of characters and even places. Good names aid the audience in a more profound understanding of the characters. Moreover, they make the book or play more enjoyable.

However, selecting names is not an easy task. It can be a tricky and tedious process for writers. Not to mention time-consuming.

If a writer happens to select the wrong names, the whole book can be chaotic as the audience will drown in total confusion, thus leading to boredom.

Please do not despair, though; we have the right tool for you. A tool that will generate and suggest perfect names for you, simple and easy to comprehend. The tool is non-other than the Island Name Generator.

Islands are great locations for setting a story. Their remoteness away from the hustle and bustle, their beautiful scenery is just on another level. To top it up, Islands can be real, mythical, or fictitious.

So what is an Island? An Island is a body of land surrounded by a mass of water. Islands are usually smaller than continents. Super small Islands are known as Islets, while a group of Islands is known as Archipelago.

However, in fictional books, islands are remote places that frequently have unique traits and rules. They are primarily fictional.

There are six main types of real Islands.

Scientists believe that thousands of years ago, there existed one colossal continent. The continent was known as Pangaea.

Pangaea broke apart due to tectonic processes and formed continental islands. These Islands also formed as a result of rising sea levels.

Sea levels rose and covered up chunks of land. An excellent example of an island formed this way is Great Britain.

Another way continental Islands formed is through erosion. Erosion causes Paths, links, or land connecting an area to disappear.

These Islands get their name from the coral creatures known as polyps. Corals are known for making reefs and limestones through the secretion of calcium carbonate.

In warm waters, coral colonies may form vast layers of reefs. These reefs may grow and surpass the seafloor hence creating coral Islands. A perfect example of a coral island in the Bahamas and Bermuda.

Artificial islands, just as the name suggests, are manmade. They can form in two significant ways. Either by expanding an existing island by draining water or bringing in material.

People mostly drain water from existing Islands to create more space for farming. For example, Chinampa, where land is used for agriculture.

Material from other places can also be brought in to build artificial Islands. Dubai is known for its many artificial islands. Dubai scooped sands from their coastal region to form islands.

Oceanic Islands are a result of volcanic eruptions. The lava from the volcanoes forms thick layers on the seafloor, thus forming Islands. Oceanic Islands can form in various ways.

Gushing from the mantle occurs if the earth’s crust is broken. This type of formation is a hot spot—an excellent example of an oceanic island in Hawaii.

Tidal Islands are pretty similar to the continental Islands. They form when the link connected to the mainland sinks in high tide water.

When the link is submerged, but people can still access the mainland, it is known as low tide. An example of the Tidal Island is the Mont St-Michael.

Barrier Islands are Islands that lie parallel to the coastline. The barriers form from sands, silts, or even reefs that protect the island from storms.

These Islands formed due to sand or silt piling up and ice melting. An example is Long Island in New York.

Types Of Fictitious And Mythical Islands

The mythical and fictitious Islands originate from mythology and legends. A perfect example is a Greek mythology, whereby islands are termed as gods’ birthplace and residence. There are several fictitious and mythical Islands. Some of the famous Islands are;

As mentioned in Plato’s work, this legendary island was situated in the Atlantic Ocean. Plato terms Atlantis as a powerful nation that had strong princes.

After the Athenians defeated the Atlantians, wickedness devoured them. Due to this, they were submerged below the ocean by the gods. The gods used earthquakes to destroy Atlantis.

The Isle of Demons is a phantom island that is believed to have demons and haunting spirits. A story told of a French woman known as Marguerite.

She was abandoned on this island due to having an affair with a younger man. Her spirit and her dead children’s spirits roamed over the island. People passing by could spot her spirit.

It is also known as the island of seven cities. The legendary island is believed to have been inhabited by seven bishops and their followers.

The bishops were fleeing away from Muslim conquerors. The seven bishops later formed the seven cities. The island of seven cities is a phantom Island as it keeps reappearing and disappearing.

They healed King Arthur after the final battle. The belief is that King Arthur’s sword Excalibur was made in Avalon using magic. It is also known for its great power.

The belief is that goddesses and sorceress Circe lived on this mythical island. Circe was the daughter of the Sun God Helios and Perse the Ocean nymph. Circe was able to turn humans into animals; she turned Odysseus and his men into pigs.

Isle Of The Blessed

It is also known as Fortunate Isles. Zeus ruled the island, where the gods took the souls of the Greek heroes.

The souls of these heroes underwent reincarnation three times, and their souls were found pure. The Isle of the blessed was paradise to these souls.

Baralku mythical Island is associated with the ancestors of the Yolngu people. The ancestors were made before heading out using canoes to give birth to the Rirratjingu clan. Baralku is also known as the island of the dead.

Buyan is a hidden mythical Island that reappears and disappears. It is where God Perun generates weather. Some people like Koschei are also known to hide their souls on this island.

Below are handpicked Island names for your book or play. These names will capture your reader’s interest.

Aloha, meaning love, is a name given to an Island that depicts love.

Ayanna is a beautiful island full of flowers.

Coraline is an Island full of corals.

It is an island name that means a combination of green and blue.

Nani is a beautiful Island.

Manaia is an Island that links the spiritual world with the present world.

Samoa is an island full of white sands.

Zale is an Island full of energy.

Oshun is a gorgeous Island. The name originates from Oshun, the goddess of love and beauty.

Amani is an island that is full of peaceful tribes.

Shinda is an Island name that means victory.

Alaris is an island name meaning powerful and complete.

It is a tropical island with beautiful beaches.

It is an island haunted by ghosts.

Picking names randomly for your characters is challenging. Why not ensure the success of your book or play by utilizing Island Name Generator? It offers you a ton of great names just by the touch of a button.

There is no need to go through all the pressures of coming up with names; the Island Name Generator is here to assist you.

Also feel free to view our incredible author tools, starting with our 3d book cover creator and our title generator.

What makes a book cover cool? Although there’s no definitive answer to this question, a few factors might END_OF_DOCUMENT_TOKEN_TO_BE_REPLACED

Creating book covers is an essential part of the publishing process, and a lot of thought goes into END_OF_DOCUMENT_TOKEN_TO_BE_REPLACED

Think about it – when browsing through a bookstore or online, what makes you pick up a book? END_OF_DOCUMENT_TOKEN_TO_BE_REPLACED