If you are new to the piano, you may be wondering where even to begin. Or maybe you END_OF_DOCUMENT_TOKEN_TO_BE_REPLACED

Whether you are a beginner bass guitarist or an expert player, you likely recognize that you have much END_OF_DOCUMENT_TOKEN_TO_BE_REPLACED

If you are new to the ukulele, or you are a seasoned player who wants to take your END_OF_DOCUMENT_TOKEN_TO_BE_REPLACED

Did you recently purchase your first guitar? If you are picking up the instrument for the first time, END_OF_DOCUMENT_TOKEN_TO_BE_REPLACED 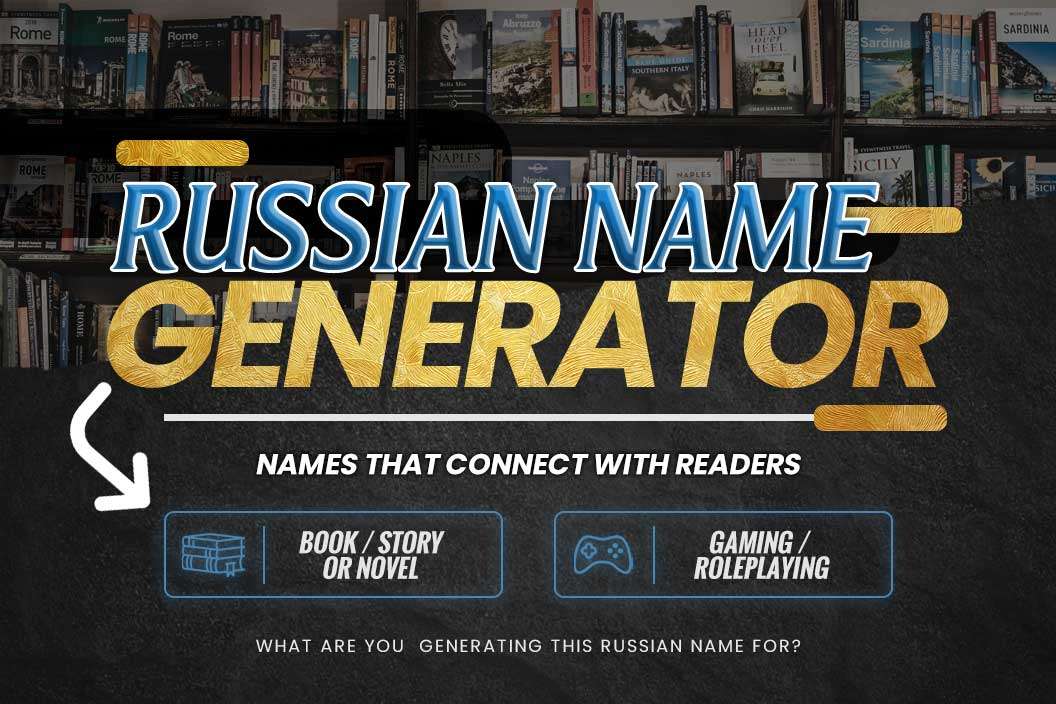 Russia has had some of the best writers and stories over the years, and it can be a fantastic source of inspiration for any writer.

Despite this, Russia is one of the most exciting places, and people are curious about it, so a story about Russia is bound to sell.

However, choosing the perfect Russian name can also be challenging for some. When a problem like this arises our Russian name generator would be of great help!

The backbone of a good story is a good placement of the characters, which you can’t afford to miss out on.

Let us get into the details of it to help you know how Russians get their names, so you are in a position to name your Russian characters appropriately;

All about Russian Names

Russian names are different from western names, and if the difference eludes you as a writer, it will mess up your story’s flow. Let us take a keen look at Russian names and see how they work to help you get it right;

These prefixes are generally for men, but women have an almost similar system, ending with “a” or “ah.”

The same thing applies to most parts of the language, and they can adjust their names to feminine for daughters.

This system works for most names, but specific Russian names won’t work with this, so it is best to stay away from them if you aren’t an expert.

First names in Russia don’t work the same as the US or other countries since there is a list of Russian names that most people use on their children.

In the US, people try to develop something new for their children’s names, but this is not the case in Russia.

There is a set of about 30 by names and 30 girl names, and people choose their children’s names from this list.

It is unusual for a person to use other names from different cultures, but you have the freedom to expand a little bit as a writer.

The full name will always have a diminutive that people will mostly use to refer to you. Diminutives are often shorter and sound softer than the full name, and typically, it is two-syllable words. These are easier to pronounce even for foreigners.

Patronymic names are the equivalent of middle names, and they help distinguish between people with the same first and last names. In Russia, you use your father’s name as your middle name, but it will end differently.

It is your father’s name, but you add –ovich or –evich to the end of it. These words are like adjectives that mean you belong to or are your father’s son. The same thing will work for ladies with a slight difference at the end.

Patronymic names for females have the suffixes –evna or –ovna, but the name changes will follow the same patterns as males. Family members will often share the patronymic name to show their parents.

That is the primary system that Russians use to create names, so you should be alright after figuring out the character’s family.

Criteria For Naming A Russian

There is a limited list of names in Russia, and this can be a good thing or bad depending on how you look at it.

It could mean it is easy to find a name, and you don’t need to come up with a new one, or you will have an issue reusing names, making your story hard to follow.

To avoid these issues, you need to get names that speak for character and their role in your story. This way, when a reader sees a name, they can relate it to the story and know what the character is all about, so let us get into the details of how to choose a name;

If you get stuck in the middle of a story and you already have a character’s father, you can use their name for the child.

It is common for Russians to adopt a form of their father’s name so you can do the same and give your character a name that identifies his lineage.

This will be a great choice since it will help the readers identify your character, and they will have an easier time knowing what is going on in your story.

All names have meanings, and you will use the father’s name as one of the names for your character, leaving you with two names.

You will have more freedom with your first name and use it to hint at your character’s personality to the readers.

You can decide and have the character use a nickname from another person to show what they think of themselves or how society looks at them.

3. What other characters think of your subject

Children get names from their parents, and names say a lot about what the parents expect from their children.

A parent’s feelings towards the child could foreshadow its future, so an appropriate name will change how the readers connect with your story.

This can also work great when choosing a nickname that characters use because of something the subject did.

It can be someone’s name from history so that the readers get the right tone from it or a reference from the book that had a significant impact on the plot.

4. The writer’s intention for the character

One of the biggest things to consider when naming characters is how you want the readers to look at them.

You need to get a name that invokes a certain feeling, whether that is the name’s natural meaning or if you create a new meaning for it.

You can have a different character in the story’s past that was good or bad, then in the current story, reintroduce the name from the old character.

The readers will always associate the name with the old character; thus, they will expect a similar personality.

5. The flow of the first and second name

Your names must have a rhythm for the sake of the flow in mind and ease of remembering. You will have an easier time remembering a name if it has a flow to it rather than one that sounds obnoxiously misplaced.

You don’t need to be too creative for Russian names since there is a list of incredible name combinations to use. Get a few that match each other and use them wisely then you will be good to go.

Ideas For Russian Names And Their Meanings

Those that have lived in Russia or with Russians know that there isn’t a very long list of names you need to worry about, plus, thanks for the existence of the Russian name generator.

This can make it easier on you, but if you need some ideas, here are some common Russian names and what they mean;

Russian names can be hard to come up with if you are not familiar with the language, but you will learn them fast when you do some research. They have a standard system of names which makes it easier to name your characters, and writers will have an easier time. Using our Russian name generator will be of great help too.

Names uniquely identify each character in your story, and not all names need to have a cultural meaning. You can use some common names without weighing the cultural implications, but it will help to consider using names that mean something to the readers.

Although it is difficult to choose the perfect Russian name, our generator will help you find the best name. With the Russian name generator, you will have access to so many Russian name suggestions.

Also generate loads of idea for your next project with our 3d book maker and book generator.