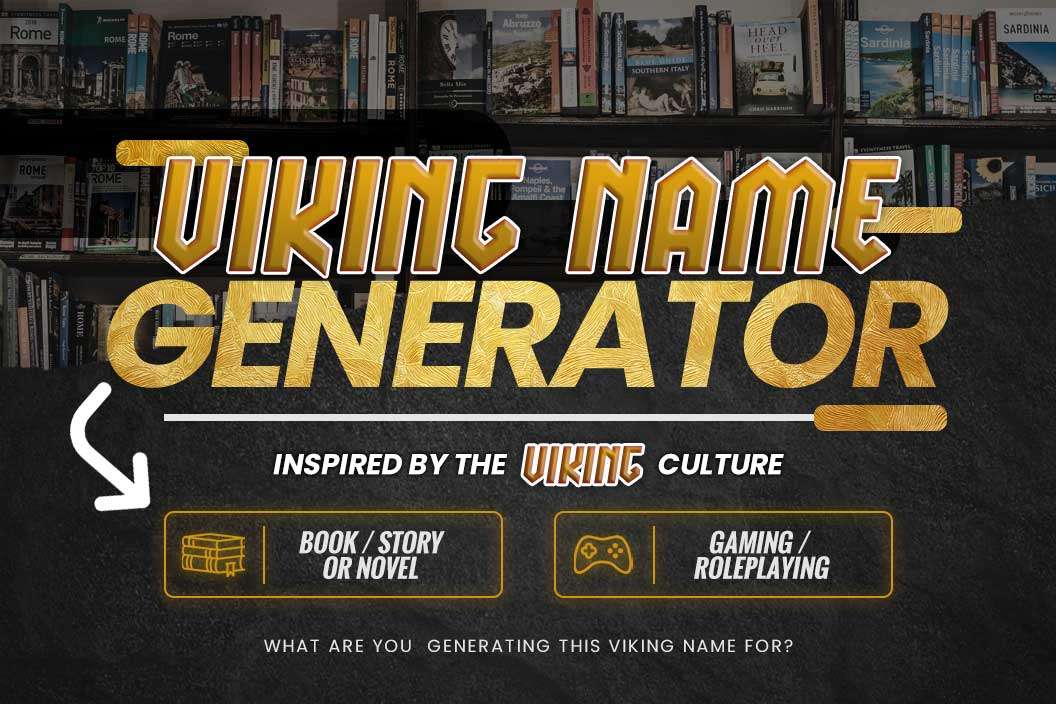 Finding the perfect character name for your book/novel is as pressure-filled as picking a baby’s name. It has to perfectly fit the character’s personality and relate to the era while being super awesome.

Character names such as Harry Potter are pretty memorable because of the beautiful stories they navigate and how they perfectly fit the characters.

The Viking name generator is the ideal tool to help you find that name you have been looking for all along. The names created by this name generator are carefully chosen to reflect the personality, history, and identity of your Viking character.

At first glance, it looks like a fairly basic search tool. Amazingly putting it into action outputs several potential Viking names for your exciting book/novel.

History Of The Vikings

The Vikings is a popular modern name for the seafaring people from Scandinavia. In the modern world, Scandinavia is Norway, Denmark, and Sweden.

In the late 8th to 11th century, the Vikings did establish their name as warriors, explorers, and traders.

In the Viking Age, the Vikings voyaged, raided, and settled in North Africa, the Mediterranean, North America, and the Middle East.

Vikings had a significant impact in medieval Scandinavia history, Estonia, France, the British Isles, and Kievan Rus. Overall, people paint Vikings are savages that raided civilized nations for their women and treasure.

However, the Viking’s culture and motives are pretty diverse. Vikings brought several changes throughout the lands in warfare and economics.

How Did The Vikings Name The Children?

To begin with, here is an interesting fact you need to know. The Vikings didn’t refer to themselves as Vikings.

It’s because the term does not apply to a specific tribe or group of people. The Scandinavia countries (Sweden, Denmark, and Norway) didn’t exist in the Viking age. The people did live in scattered tribes and clans throughout the region.

The term Viking did mean freebooting voyage or piracy and is something a person would do; it wasn’t a personal descriptor.

For example, we are going on a Viking. So let’s go back to the Viking names and naming conventions.

Like in most cultures, Viking parents gave children the names of deceased relatives. The names were mostly from direct ancestors like great grandparents or grandparents.

Vikings had much respect for their ancestors, and they believed naming a child after a deceased relative came with blessings.

They believed the luck of the deceased would attach to the newborn; thus, the child with be successful in their endeavors. In part, the deceased legacy will continue living on in the newborn.

The perfect naming instances where: a boy would receive his father’s names if he’s born after his father’s death. The children also take the name of a relative that died while they were still in the womb.

If there was an honored ancestor with a similar name (father or relative), then the ancestor’s nickname or byname is also given to the child. It ensured that names remained in the same family for quite a long time.

It was common for Viking parents to name children after their gods. The most popular Viking god was known as Thor. To the Vikings, he the hammer-wielding protect of all humanity.

Thor was a naming element that was quite popular in boys’ names. Examples include Thorbjorn, Thorberg, Thord, and many more.

As was also a Viking god, the name was popular among the girls such as Asgard, Astrid, Ashlid, and many more.

Most Viking names usually had one element, but others had two elements. Some popular Viking names from elements are Bjorn, meaning bear, and only has one name element.

There’s Bjorn stein, which means bear rock and does have two elements. Note that you must be careful when using name elements.

Some elements are only used in the last position while others are in the first position. Plus, some are strictly for females and other males.

Viking parents had two naming principles which were variation and alteration. The variation would change one name element and leave the other constant, such as Halldor, Hallberg, Hallbjorn, and many more.

In alteration, the sound was similar at the beginning of the child’s name, for example, Ottar, Olief, Olaf, etc.

The naming principles, alteration, and variation are ancient; parents used them since naming after relatives were prevalent.

For example, there’s Snorri Sturluson, which means Snorri, the son of Sturla. The patronymics system was either daughter of or son of (the father’s name), the most popular. It was simply the daughter or son of (the mother’s name) in the metronymic system.

The Vikings gave each other nicknames; individuals would get nicknames from people who perfectly knew them. A Viking couldn’t use the nickname officially, but others referred to them by it.

People were given nicknames depending on their habits, origin, occupation, character trait, physical traits, and occupations.

The Most Famous Vikings

The Viking age was around 700 AD to 1100. The Vikings were famous for their impressive pillaging, raiding amount, and blood-thirsty aggression.

In Old Norse, the term Viking means a pirate raid, and this tells that these people were a pretty violent bunch by definition.

Characterizations aren’t usually entirely accurate, and some historians argue that Vikings weren’t as vicious and that many were peaceful explorers and traders.

However, going through the name list, you’ll realize that some of the most famous Vikings were brutal characters.

He is one of the Vikings with a blood-thirsty reputation known as Erik the Great. He was named Erik the red because of his hair color.

After being banished from Iceland, Erik the red found Greenland for killing several men. Erik’s birthplace was Norway; interestingly, Norway had exiled his father.

Exile and violence were in the family. The real name of Erik the red was Erik Thorvaldsen, and he was famous for his flowing red hair and violent temperament.

Historians claim that Leif Erikson wasn’t half bad as his father. Leif was the first European to discover the beautiful North American land.

That’s almost 500 years before the famous Christopher Columbus. His crew set up camp in North America, which he called Vinland.

She was the daughter of Erik the red. Sources say that she had his father’s temperament, Erik the red. While exploring North America with Leif Erikson, she chased natives singlehandedly while pregnant.

Ragnar Lothbrok was arguably the best and most famous Viking warrior. He made several raids on Anglo-Saxon England and Francia, earning him legendary status.

Bjorn was Ragnar’s son and famous for raids on England, France, and the Mediterranean coastline. Bjorn did various raids before his death in Frisia.

Ivar was also Ragnar Lothbrok’s son. He got his nickname because of his condition that made his legs easily fracture. In addition, he had a fearsome reputation.

Ivar the Boneless was a berserker and a champion warrior. He fought in trance-like fury and is famous for his several invasions of the Anglo-Saxon kingdoms with his brothers.

Hardrada means brutal ruler. He had a reputation for his aggressive military approach when dealing with disputes and leadership.

He took the Norwegian throne in 1046 and was the last greatest Viking ruler. He presided for progress and peace plus the introduction of Christianity.

He met his death at the battle of Stamford Bridge, England. King Harold’s army surprisingly defeated his Viking army. An arrow to the neck killed him.

He was one of the many King Herald Fairhair sons. King Harald Fairhair was the first king of Norway. Therefore Eric Bloodaxe was wholly born into the Viking lifestyle.

He participated in most bloody raids across Europe at a very early age, 12 years. He learned that you had to be violent and a fierce warrior to distinguish yourself in the Vikings community.

Eric Bloodaxe’s real name was Eric Haraldsson, and he got his name by murdering his brothers.

He was famous for his swordsmanship. History says that Gunnar was a formidable fighter and his jump exceeded his height.

That’s even when wearing full armor. Gunnar took part in many fights along the coasts of Norway and Denmark.

You are indeed looking for a Viking-inspired name. There are many exceptional Viking names, and our Viking name generator will help you get the best. Nonetheless, here are some of the names inspired by the popular Viking culture.

The famous names for Viking girls:

The famous names for Viking Boys:

If you have trouble finding the perfect Viking names for your book characters, you are on the right article. The article unearths some of the Viking traditions and their most popular names.

To honor the ancient Viking heritage, the parents and expectant chose original Norse or Viking names for their children. The Viking name generator will surely help you find the right name for your characters.

Also, check out our tools and software to generate mockup for eBook in PSD or chapter name generator.

Dr. Seuss’s books are known for their quirky characters, rhymes, and illustrations. However, the book covers are still END_OF_DOCUMENT_TOKEN_TO_BE_REPLACED

In a world bombarded with images and messages from all sides, it’s no wonder that book covers have END_OF_DOCUMENT_TOKEN_TO_BE_REPLACED

Funny novels are sometimes hard to write because humor differs from person to person. For a humorous book END_OF_DOCUMENT_TOKEN_TO_BE_REPLACED