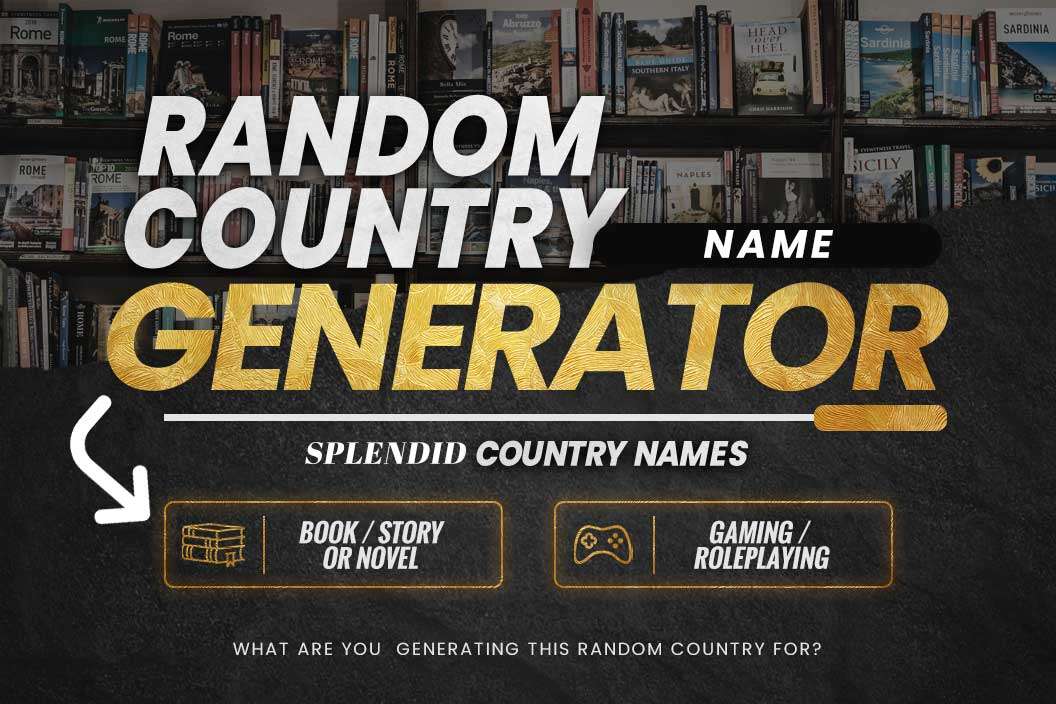 Location names are equally as essential as character names in literary works. The locations enhance the reader’s visual experience. They aid in the internalization of the narrative and make for thrilling reading.

It would help if you gave these sites proper names. It is difficult for many writers to develop names for countries in their stories. Choosing appropriate names is critical to the plot’s structure and cohesion.

The plot becomes uninteresting due to the inability to come up with appropriate names. It makes it harder for readers to stay engaged while reading. You should use names that elicit strong emotions and draw the reader’s attention.

Thanks to the Random Country Name Generator, you no longer have to struggle to come up with geographical names. The tool makes excellent and valuable recommendations.

A country is a sovereign territory marked by a defined political boundary. Countries have autonomous governments, financial systems, laws and regulations, constitutions, and leadership structures.

There are several types of countries in the world. These countries are pretty diverse, with broad cultural differences and people.

Presidential republics are countries where the president gets elected through a democratic process. In most presidential countries, voting is through universal suffrage.

It means that all citizens who have attained the majority’s age get to vote regardless of race, academic qualifications, caste, gender, or religion.

In presidential republics, the head of state is the head of government. The countries have a legislative body that enjoys independence from the presidency.

It is a concept known as the separation of powers. In presidential republics, elections are held periodically as per the constitutions.

In parliamentary republics, the president plays a symbolic role rather than an administrative role. The citizens elect members of the parliament via universal suffrage.

The prime minister is the head of government, and the republic’s citizens elect them. Parliamentary terms in these countries have limits according to the constitution’s provisions.

Military dictatorships are countries in which the supreme authority lies in the hands of an individual. The military backs the president in these countries, and any political descent is ruthlessly met with violence.

These countries do not permit democratic processes. The dictators usually have mock legislative bodies that have no real authority. Military dictatorships are synonymous with high poverty levels and indignation among the citizens.

Constitutional monarchies have a royal family, who are the ruling class and parliamentary governments.

The members of the royal family belong to the upper echelons of society. Their role is symbolic, and they do not partake in the daily running of the country’s affairs.

In constitutional monarchies, there is a prime minister, the head of government. These countries tend to have bicameral legislatures, where there are two houses of parliament.

Members of parliament are regularly elected as outlined by the constitutions. The elections follow the principles of universal suffrage.

In Semi-constitutional monarchies, the members classified as royalty play roles in government. The monarchy has direct authority in certain institutions. These roles are highlighted in the constitution.

Though members of the monarchy can’t be elected, the ones in the legislature can. The elections are similar to those of constitutional democracy. The monarchy and legislature exist independently of each other.

Absolute monarchies are countries where the monarch is synonymous with the government. They are in all axis of administration. The ruling class is preordained to govern the countries for all eternity.

Absolute monarchies have no elections or democratic processes. Succession is hereditary.

These countries can also be referred to as kingdoms.

One-party states are countries where all the power is vested in a single political movement. The constitutions of these countries do not permit the formation of different political parties and movements. Oppressive regimes characterize these countries.

In most cases, one-party states are created by dictators attempting to self-legislate themselves to power.

Some countries lack a centralized or devolved government. Rebel forces hold these countries following the collapse of the government.

They are some of the most dangerous countries in the world.

In rebel-held countries, there are no laws or law enforcement agencies. The citizens live in constant fear of insurgent attacks. These countries descend into chaos and financial ruin rapidly.

Countries can also be classified according to their levels of financial growth. The measure of financial growth is known as the income per capita or the Gross Domestic Product. It is the total value of goods and services produced in a country over one year.

Third-world countries are at the bottom tier of the classification. Widespread poverty characterizes these countries.

They experience low GDP, low employment levels of resources and capital, and low levels of industrialization.

They experience moderate levels of employment. These countries have a high potential for growth achievable under the right circumstances.

At the top of the classification, we have first-world countries. These countries have the highest per capita income. They are fully industrialized.

They have the highest levels of employment of resources and capital.

Many adventure and exploration titles exist, with protagonists embarking on epic journeys. The narratives have become well-known, transforming the novels into box office smash hits.

Literature regarding continent discovery isn’t entirely new. There are several stories of exploration dating back to the Victorian era.

The following are some of the countries mentioned in the finest stories:

Ficciones is a series of stories that can only be described as obscure. The book has strange tales that are written in a unique style. The book covers many themes, including secret societies, philosophy, and ancestry.

Events in the book occur in the fictional country of Uqbar. The book tries to explain the complicated nature of human beings.

2. Trieste- Jan Morris’ Trieste and the Meaning of Nowhere

Jan Morris describes the country of Trieste as a cultural melting point. The author vividly describes this land in the narrative, talking about its cities, towns, and seas in great detail.

The book is a reflective journey about how the protagonist recognized Trieste as her home. She falls in love with the land she had once resented.

Pale Fire is one of the unique pieces of literature. The cryptic book is written in poetry form. You will be scratching your head trying to decipher the meaning and themes in the book.

While there have been several interpretations of the book over the years, the most prominent one was by Bryan Boyd.

Places without chairs is a fictional story about the country of Evarchia. It talks of the events in the life of Ulrich.

Ulrich is the prince and heir to the throne of Evarchia. The story begins when Ulrich’s father is on his death bed. Ulrich is on his way to take the throne, but he has his reservations about being the king.

In a miraculous turn of events, the king makes a full recovery. Ulrich’s relief is short-lived, as the king was assassinated shortly after.

Nonestica is a mythical realm in the well-known Land of Oz. The country of imagination is another name for the mythical land.

A dreadful desert surrounds the country of Nonestica. The country is home to seven territories, the most notable of which is Oz.

Ev is a land where ferries ply their trade. Animals converse and comprehend human language in Mo, a realm of immortals and magic. Ix is a land populated by witches. Ripple land is a region where massive mountains move in crests and peaks.

Here are some suggestions for country names that you might find helpful in your writing. These suggestions will spice up your novel and keep the readers engaged.

It’s not easy to come up with random names for your characters. Why not utilize the Random Country Name Generator to help your book or play successfully? At the touch of a button, it summons a slew of top-notch suggestions.

There’s no need to fret about coming up with names when the Random Country Name Generator is here to assist you.

Also make sure to check out our easy-to-access author tools for DIY 3d book cover and cool book titles.

Dr. Seuss’s books are known for their quirky characters, rhymes, and illustrations. However, the book covers are still END_OF_DOCUMENT_TOKEN_TO_BE_REPLACED

In a world bombarded with images and messages from all sides, it’s no wonder that book covers have END_OF_DOCUMENT_TOKEN_TO_BE_REPLACED

Funny novels are sometimes hard to write because humor differs from person to person. For a humorous book END_OF_DOCUMENT_TOKEN_TO_BE_REPLACED