Fantasy Town Name Generator- Get The Perfect Names For Towns 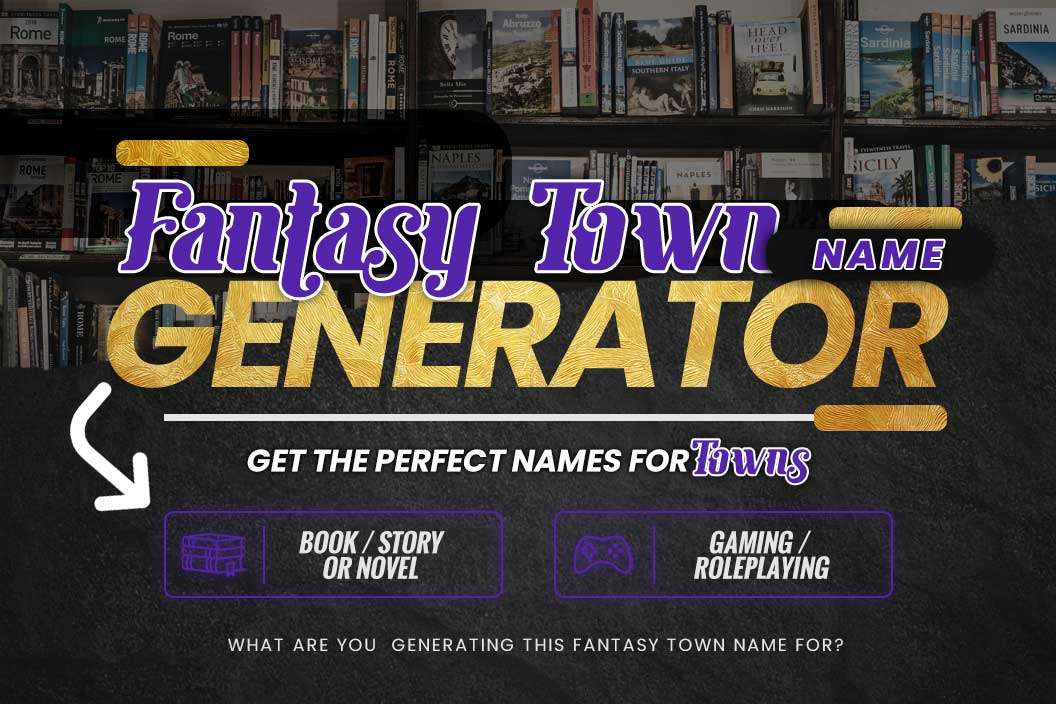 In any literary work, the names of locations are as crucial to the story as the characters. The locations in your book play significant roles in the plot and structure of the tale. Fantasy Town Name Generator would be a great help when naming locations in your story.

Locations assist readers in making visual perceptions, placing characters, and understanding the boundaries of the story. It adds cohesion and makes the story easier to interpret.

Selecting location names in fantasy books is quite challenging for writers. You may spend hours developing the ideal plot, only for the location names to ruin your story.

Using generic or plain names makes the story dull. They make the book less exciting and intriguing. It is up to writers to develop names that capture a location’s characteristics and reputation.

The Fantasy Town Name Generator is the ideal tool, as it gives you excellent suggestions.

Towns And Life In Them

Towns are built-up urban areas that share a lot of similarities with cities. Towns are significantly smaller than cities. They have distinct boundaries, many amenities, and their local governments.

Towns are larger than villages. They have better amenities and larger populations. Unlike villages, towns have municipal authorities and special by-laws.

The emergence of towns is a phenomenon that occurs gradually over an extended period. They usually start as villages.

The population steadily increases, creating a need for supporting infrastructure and potential markets.

Investors and firms that identify growing areas quickly move in to tap into the market. It causes mass immigration to these areas and rapid growth. The land use of the area changes as immigration occurs and real estate investment grows.

Eventually, what was once a village becomes a large urban area and eventually becomes a town.

Towns have excellent infrastructure. They have complex public transportation systems such as roads and subways.

The municipalities maintain and control these transport systems through tax payer’s money.

The by-laws differ from town to town. Some standard practices in one town may be illegal in another. The municipality has the authority to levy fines on lawbreakers. They also issue business permits and provide vendors with operating licenses.

The law enforcement duties in a town are left to the sheriffs. These are the central policing authorities that ensure law and order. A town may have several precincts depending on its size.

Towns tend to offer a calmer day-to-day experience as compared to cities. Due to their comparatively small sizes, they have less traffic and less pollution. People who have lived in metropolitans and towns will agree that the latter has a less stressful life.

Where employment opportunities are a concern, towns tend to offer great options. Manufacturing plants tend to operate in towns. The cost is usually cheaper than in cities, and the infrastructure is better than in villages.

The competition for employment opportunities is not as great as those in cities. It is due to towns having smaller populations. Not all towns have great job opportunities.

The land use in town is quite similar to that in cities. Towns tend to have several towering skyscrapers. In most towns, the open places are in the park. Most of the land in towns is used for real estate purposes. There are zones for housing, schools, factories, and offices.

If a town increases in population and size, it becomes a city. The classification criteria for cities and towns vary between countries.

Some countries have stringent classification criteria. In some cases, cities may be stripped of the tag and revert to towns.

Not all towns are the same. Towns are classified according to their functions and economic activities.

These classifications are as follows:

These are towns that have major industries. In most cases, these towns emerge due to the prominence of one industry. These towns mostly have manufacturing industries that employ thousands of people in the area.

It is imperative that the industries survive, as they are vital to their survival. There are cases where bustling towns turn into ghost towns upon the collapse of a major industry.

They are towns that emerge due to the presence of mining activities. They are built in well-endowed places with natural resources such as copper, gold, and cobalt.

These towns start as small supporting institutions for the miners before increasing and turning into huge towns.

Mining towns were common during the gold rush. Famous mining towns in the United States are Leadville and Deadwood.

These are towns that house government offices and other official government buildings.

The towns provide adequate services to government officials. They provide many of its occupants with decent employment opportunities.

Administrative towns are some of the oldest in the world. These towns were mainly set up in the colonial era, where the colonial authorities wanted to establish defined areas of operation.

They are towns located near the oceans. These towns have huge ports where the country receives foreign goods. The ports are also used to export products. Huge cargo ships dock in these towns.

They are towns that are hotspots for foreign visitors. They have huge attractions such as museums, parks, historical sites, galleries, theaters, etc.

Many UNESCO heritage sites are located in tourist towns. These towns tend to have high costs of living. The hospitality industry is vibrant in these areas.

These are towns where major academic institutions are located. This town’s demographic consists mainly of young people pursuing higher education.

Educational towns have low costs of living. These towns are attractive to students and people working in education.

Many authors have succeeded where others have failed, that is, in writing pieces that bring out the vibrance of locations. These authors have successfully encapsulated these fictional towns to the extent that they appear to be realistic. These towns have character.

Here are some famous towns from books:

Bruno is a laid-back cop with a serene demeanor. He is a former war soldier who has settled into town life.

In the town of Benoît Courrèges, Bruno is the lone cop.

Bruno’s life is turned upside down when an elderly war veteran is killed in the town. The book takes us on a journey through the murder investigation.

2. Bartsetshire- The Warden by Robbin Gilmour

The Warden is a gripping literary work on Mr. Harding’s life incidents. The narrative takes place in a hamlet in the town of Bartsetshire. The book aims to shed light on the issues surrounding the church’s misuse of donated monies.

Mr. Harding is a devout clergy member who is trustworthy and sensible. He discovers that a charity has given far more than the foundation.

John Bold tries to expose the church for misusing its good name by collecting more money than charitable organizations require.

Helen Simonson’s Major Pettigrew’s Last Stand is a heartwarming story about loss and tolerance. As the author takes you around the picturesque town of Edgecombe, St Mary, the fantastic tale will have you in tears.

The story effectively portrays Edgecombe, a lovely and historic community. It tells the story of Major Pettigrew and Jasmina Ali’s friendship.

4. Comerford- Fallen into the Pit by Ellis Peters

Ellis Peters’ novel Fallen into the Pit is a suspenseful investigation of a murder in Comerford hamlet. The case revolves around the assassination of a vile pro-Nazi figure.

The prime suspect in the murder is Chad Wedderburn, a World War II veteran. He and Dominic Felse are racing against the clock to establish his innocence.

Town names need to be practical and exciting. When choosing town names, you need to keep them relevant to the era. For example, a medieval story should have medieval town names. It makes the story authentic.

Here are some suggestions:

A book is only as interesting as the characters and the locations within its pages. Writers tend to struggle to develop names that capture readers’ imaginations.

Picking names for places is tricky. Even the most talented creative writers struggle to formulate proper location names. The result is a story that is boring and hard to follow. Thanks to the Fantasy Town Name Generator, you no longer have to strive to come up with location names.

You get access to thousands of brilliant town name suggestions with the Fantasy Town Name Generator. The tool will make your work exciting and keep the readers excited and willing to follow the plot.

What makes a book cover cool? Although there’s no definitive answer to this question, a few factors might END_OF_DOCUMENT_TOKEN_TO_BE_REPLACED

Creating book covers is an essential part of the publishing process, and a lot of thought goes into END_OF_DOCUMENT_TOKEN_TO_BE_REPLACED

Think about it – when browsing through a bookstore or online, what makes you pick up a book? END_OF_DOCUMENT_TOKEN_TO_BE_REPLACED