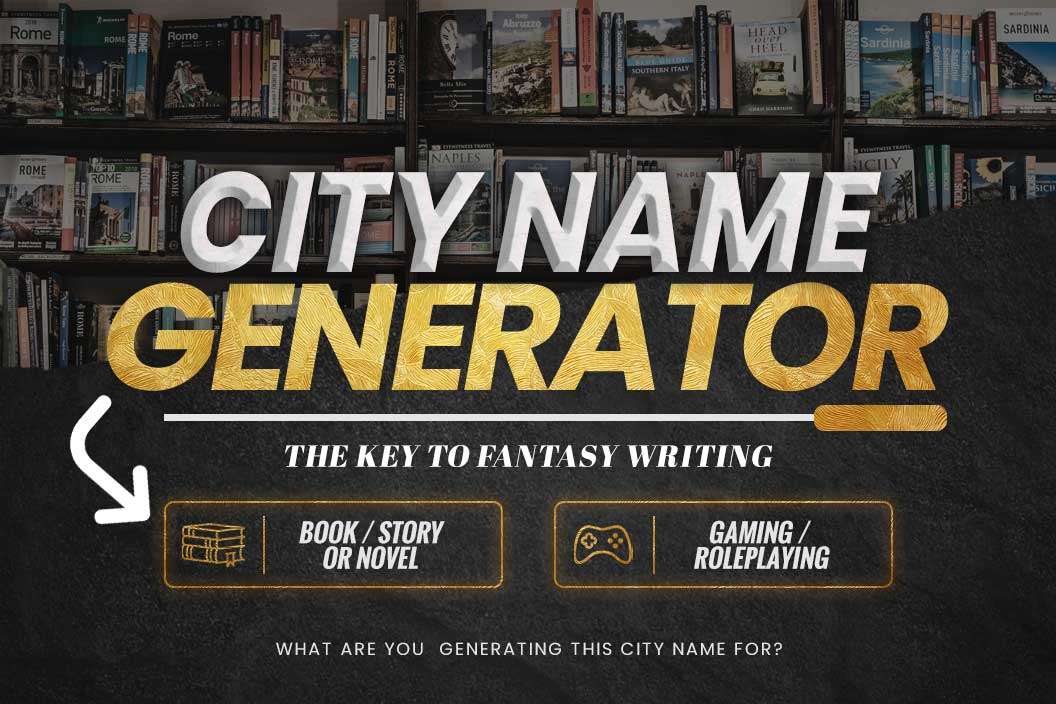 Contemporary publications set stories in cities. The dynamic nature of events in cities makes them an exciting world and crafts a fantasy. If you intend to base your story in an urban setting, be sure to pick a compelling city name. A City Name Generator is here to assist you.

There’s a lot of work and time required to develop a compelling city name. The city needs to not only be fancy. Ensure your city has intriguing qualities that complement your character.

How To Write A Compelling Fantasy Story

Creating an enthralling fantasy story demands details. As such, you need to find a creative way of organizing all that content.

What are the macro aspects of your story? How do scenes complement the story, and how relevant are they?

In this guide, you’ll learn how to put writers in a fantasy loop within seven steps. You’ll also know how to devise chaos in your fantasy.

I’m talking about juggling between chaos and order to hook your readers. Read along to find out how.

The initial stage of the fantasy should establish the protagonist. Who’s the “you” in your narrative? Establishing the protagonist creates an active drive in your story.

In this step, you also establish the existing conditions in the fantasy. Take a look at this brief fantasy narrative.

Think of a hypothetical superhero, Matt Brown. He is an ordinary man during the day but has a twisted night shift duty.

His home city, Goldam, is brooding with bad guys. Therefore, Matt Brown decided to become Goldam’s vigilante. A few individuals know his true identity, and no one would blow his disguise up.

Matt Brown is the “you” in this example. We’ve already established his status quo. The reader gets some sense of a valiant hero who wages war against crime.

The reader is now aboard the fantasy train, and now you need to introduce your character sincerely. Unless you’re creating Superman again, it would be best if you impose limits on your hero.

What does your character need to mind? Adding the need will start your narrative. Whether you make the audience aware or not is up to you at this stage.

This stage provides the best opportunity to invoke some conflict in your story. Let the audience start empathizing with your character.

Empathy should hook them directly to the story. Let’s continue with the anecdote from the previous step using this information.

…One of Matt’s confidants asks him to keep his vigilante profile low. He dismisses this advice and claims that he is limitless. Matt is reluctant because of his feelings towards Mary, and he believes that he’ll juggle between his two realities.

His brother, James Brown, knows that Matt won’t manage to keep living that way forever. He thinks that Goldam’s vigilante needs to pass on the mantle.

In this excerpt, we see Matt’s needs. He needs to be careful with his desires. He desires to be with Mary.

The character is full of needs, and the story starts inviting suspense. Your audience will be married to the uncertainty in play by this point.

The story has already gotten momentum. This moment is when you take your readers to the deep waters of the story. Let’s see what we can learn from our hero, Matt.

Since Matt can’t blow his disguise, he approaches the Sheriff to call in a favor. The Sheriff agrees to help him if he delivers one of the criminals looming large. Matt agrees and goes hunting.

He successfully subdues the criminal and delivers him to the authorities. However, their celebrations come short as another villain invades Goldam.

The list of our hero’s needs keeps adding up. He now needs to help solve a crime to get the Sheriff’s assistance.

Another difficult obstacle stands in the way of this hero. He faces a great test, and everything seems to have chosen the wrong turn. What’s going to happen?

Creating conflict in a fantasy poses a problem for the protagonist. Make your audience itch with “what next?” rhetorics.

The hero has been looking to fulfill his needs from the second step. He’s yet to succeed in his quests. Nonetheless, a hero has to have a way of getting around, doesn’t he?

The hero in our excerpt, Matt Brown, finds what he’s been searching for and an unforgiving psycho-driven murderer. Not what he thought he was foraging.

A true hero has to endure extraordinary problems. Now make the audience see the magnitude of the hero’s problem. Use the same chaos to navigate the story now. Don’t forget to keep your readers guessing.

“…Her demands are simple. She wants to know the face of the real villain and mutilate them publicly.

She won’t stop butchering the people of Goldam until the vigilante unveils their identity. She takes Mary hostage. Amy will spare Mary’s life if her terms are honored.

Matt cannot stand and wait for Mary to die. He decides to blow his cover to save Mary’s. However, the Sheriff confesses to being the vigilante. Matt’s situation gets worse ….”

Now the plot is exacerbated because of James’ move. The hero has to assume control now before time runs out. It’s time to pay the price!

The key to getting a hold of something has to come at a cost. It would help if you showed the readers what price the hero is willing to pay.

The point here is to push the hero to the extremes. This act reveals the true character of the hero. What choices does Matt make, and what are the consequences? Can he pay the total price?

“…Matt decides to emerge from his hideouts. Amy Garcia has attracted his attention. He organizes a meeting with Amy Garcia where trade for the hostages and Matt’s face happens.

The hostages, however, do not accompany Amy to the meeting point. Furthermore, Amy won’t share the whereabouts of Mary and the Sheriff unless she sees Matt’s face.

With some coercion, Amy capitulates and discloses the locations. Matt decides to save Mary first. However, he realizes that Amy has lied to him. Mary died in the process, and the Sheriff survived fatal injuries….”

Our character pays the price of losing his lover, Mary. The price paid takes readers to the peak of the conflict. It’s now time to bring everything home.

6. Piece The Story Up

It’s now time to reinstate the order in your fantasy. It would help if you anchored your fantasy so that the main protagonist controls the story.

Show the readers how the hero maintains their legacy despite the devastating loss. Piece everything up and give your hero a fate.

Like in the real world, the hero has to change in some aspects. The journey has been harrowing, and the hero proves more formidable too. It’s now time to demonstrate how the changes shape your hero.

This section completes the loop of the story. The narrative should now converge for the readers. Everything may look the same, but the hero is now different. Below is an example of how to wrap up a hero’s journey.

“…The Sheriff is discharged and embarks on a mission to get revenge. He murders anyone linked to Amy in his endeavors. He becomes a monster that terrorizes Goldam too.

Matt knows the only way to bring peace to Goldam is to eliminate the Sheriff. A cold pill to swallow. Matt subdues him and takes the blame for the Sheriff’s murder crimes….”

The hero in this fantasy ends up doing what wasn’t originally inside the plan. He even takes the burden of the Sheriff’s crimes. To preserve the heroism, Matt turns out to be a villain that absorbs the chaos of Goldam.

You have also gotten the guide to fantasy writing. By dividing the story into chaos and order, your story gets a hook.

Furthermore, you’ve seen some tips and a practical example. Consider using this writing loop if you’re stuck in the creative loop. There’s no need to fuss about coming up with names when the City Name Generator is here to assist you.

Dr. Seuss’s books are known for their quirky characters, rhymes, and illustrations. However, the book covers are still END_OF_DOCUMENT_TOKEN_TO_BE_REPLACED

In a world bombarded with images and messages from all sides, it’s no wonder that book covers have END_OF_DOCUMENT_TOKEN_TO_BE_REPLACED

Funny novels are sometimes hard to write because humor differs from person to person. For a humorous book END_OF_DOCUMENT_TOKEN_TO_BE_REPLACED