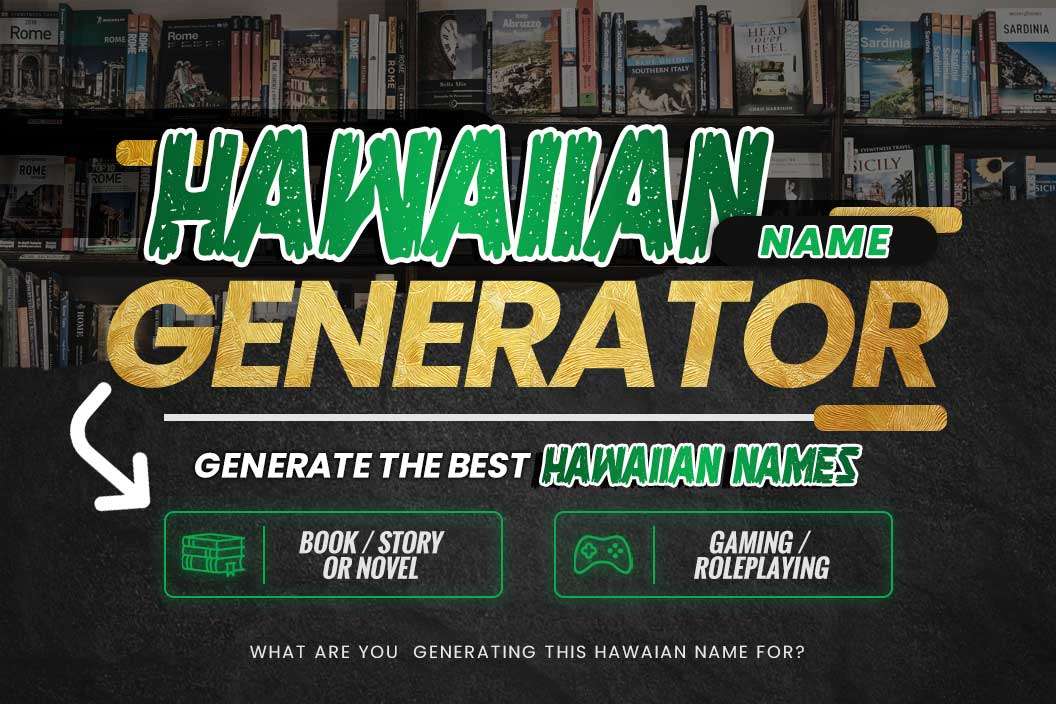 Are you looking for a unique name? A name that not only has heads turning but also has depth and meaning?

You can borrow a name from several cultures outside of the English language. Hawaiian culture is one of them.

Hawaiians have distinct, beautiful names with an artistic meaning behind them. If you are looking for a Hawaiian name but have no idea where to begin, the Hawaiian Name Generator will do the trick. You will be able to generate a new name without much hustle.

So, What Exactly Is In A Name?

“What’s in a name? What we call a rose by any other name would smell as sweet” is an excerpt quote from one of Shakespeare’s masterpieces, Romeo and Juliet.

However, contrary to these exempt names do have value and play a significant role in how one views others and themselves.

No matter how you view it, names have meaning that can, in some instances, shape the way a person behaves.

Names also help in the purpose of identity. A person without a name can be considered alien and, most likely, illegal.

Nevertheless, finding the right Hawaiian name doesn’t have to be difficult or impossible. You can follow a process and have a meaningful name from a beautiful culture.

How To Pick A Hawaiian Name

Choosing a name is usually a reasonably simple task. Especially if you know what it means, a foreign name, on the other hand, can be a handful. It’s like getting a tattoo written in Chinese letters, yet you have no idea what it means.

This is why research into the name is essential. Fortunately, gone are the days when you had to read tons of books or visit the country to get what you needed.

Nowadays, it’s just by the click of a button or the tapping of a screen. Below are some steps you can follow before settling on a Hawaiian name.

As a non-Hawaiian, you may not find anything offensive in naming a child a Hawaiian name. Still, it is considered cultural appropriation instead of appreciation in some cases.

It is best to do your research before you decide to name a child or a character in a fictional story, etc.,

Hawaiians place value on ancestors and symbols. They name their children after the elderly and music symbols related to their culture. You can do this as well if you want to pay homage to a loved one who may or may not be alive.

3. Learn How To Pronounce

Before settling on my Hawaiian name, it is best to understand how it is pronounced in its essence. It won’t be very comfortable to mention a Hawaiian name when you have not studied its pronunciation.

In a sense, it may seem almost arrogant on your part. There are enough resources online to help in this case. In the end, you have no excuse.

As stated before, names have meaning. You cannot decide on a name simply because it sounds nice. Hawaiian Name Generators can help you choose a name; however, understand the meaning.

Some names may sound pretty but may go against a belief system or the spirit of a story. It doesn’t take much to find the essence of a chosen name.

This is primarily true if you are considering naming a child. Some names may have significant meaning and can honor a family member.

Yet, they can be a source of ridicule for a child or person later on in life. Choose wisely and avoid unnecessary pain.

You also have to analyze the name’s initials; whether you are naming a character in a book or a child, initials matter.

Why Choose A Hawaiian Name?

Most people choose Hawaiian names because they are fascinated by the culture or fell in love with the island after a visit.

Whatever the case, it all depends on who you are naming. It could be a new child in the family, or you want to know what your name means in Hawaiian.

Or it could also be a character in a book you are working on. In the latter case, it is best to understand the meaning of the name and the era in which you have set the book. Not all names are relevant in every era.

Readers will relate to the book more if you put more work into such minor details.

Choosing Hawaiian names adds depth and intrigue. It is an individual introducing themselves or could be a conversation starter. A book presents a reader to a new culture in the case of a book.

Choosing a Hawaiian name need not be for some profound reason. Sometimes it is just for fun and creativity. This is true in books or a teen who wants to be unique.

Hawaiian names have been gaining prominence in the past two centuries all over America. There are several Hollywood A-listers with Hawaiian names, not to mention leaders. It is no wonder people are beginning to use these names.

So, what are the most popular Hawaiian names today? Here is a list of men’s and women’s names with Hawaiian origins.

I am sure you have come across this name. If not in your day-to-day life, at least in movies (Keanu Reeves, a famous Hollywood actor).

Keanu is predominantly a male name. Its literal meaning is ‘The Cold’ from the word Ke which is The, and Anu, which means cold. However, the term implies ‘cold breeze or wind.’

Kai is also a male name though it is occasionally a female name. Although it has its roots in Hawaii, it can also be attributed to Scandinavian and Chinese cultures.

Kai generally means sea or ocean in Hawaiian but can also mean something else if translated to Chinese or any Scandinavian language.

This is a unisex name. This means both girls and boys can use it. The term implies the sea without restraints or free-flowing as it is derived from the name Kai which means sea.

It is also a name used in other parts of the word, so do not be surprised if it has a different meaning.

Kalani is also another male name that means ‘the sky.’ It is also used to represent royalty or heavenly. This name is usually used to imply nobility or spirituality.

Hawaiian names have been gaining popularity. It’s no wonder you want to be part of this wave. If finding that perfect Hawaiian name is your goal, use our Hawaiian Name Generator and make your work easier. It doesn’t get any better than this online tool. Give it a try.

Makai is a male name that means toward the sea. It is commonly used when showing orientation; Another name has Kai in it, which we have already defined as the sea. This name has been confused with Mauka, which means towards the mountain.

Although you will find this name in other cultures or is primarily a Hawaiian name, most people consider this a gender-neutral name, but it is mainly given to men. It means a prize or an award from a divine being.

If Diana means heavenly in English, then Kiana is the Hawaiian version of Diana. Kiana is a name that speaks of divinity and sacred things.

Some researchers have also suggested that it is about the moon goddess in Hawaiian or Polynesian culture.

Alani is a Hawaiian name that has some Celtic influence. Its meaning is rooted in the orange tree or fruit because of its fragrance.

Typically, a girl’s name comes in other variations, such as Alana or Alayna. It has been growing in popularity, especially in the 21st century.

Kailani is a girl’s name according to Hawaiian customs. Just like Kalani, Kailani means ocean and celestial.

Though men use the name, most of the children given such names are girls. This is also another name that has been gaining popularity in recent years.

This is another girl’s name that is gaining popularity. It generally means gentle or serene skies. Just like most Polynesian names that end with -ani, this name has skyrocketed in demand in the last two decades, especially in English-speaking countries. According to research, it is considered among the top 700 names as of 2018.

This is a Hawaiian name generally given to girls. The name Luana means festive, satisfied, happy.

It originated from Polynesian culture but has been recently adopted into the English and Italian names. It comes in diverse forms, such as Ann, Anna, Luan, or Louanne.

It peaked in the early and mid-1940s, but it’s variations, such as Anne and Luanne, are still a favorite today.

Also while you’re at it, why not try using our generator of mockup book cover or these good book titles that haven’t been used.

Dr. Seuss’s books are known for their quirky characters, rhymes, and illustrations. However, the book covers are still END_OF_DOCUMENT_TOKEN_TO_BE_REPLACED

In a world bombarded with images and messages from all sides, it’s no wonder that book covers have END_OF_DOCUMENT_TOKEN_TO_BE_REPLACED

Funny novels are sometimes hard to write because humor differs from person to person. For a humorous book END_OF_DOCUMENT_TOKEN_TO_BE_REPLACED