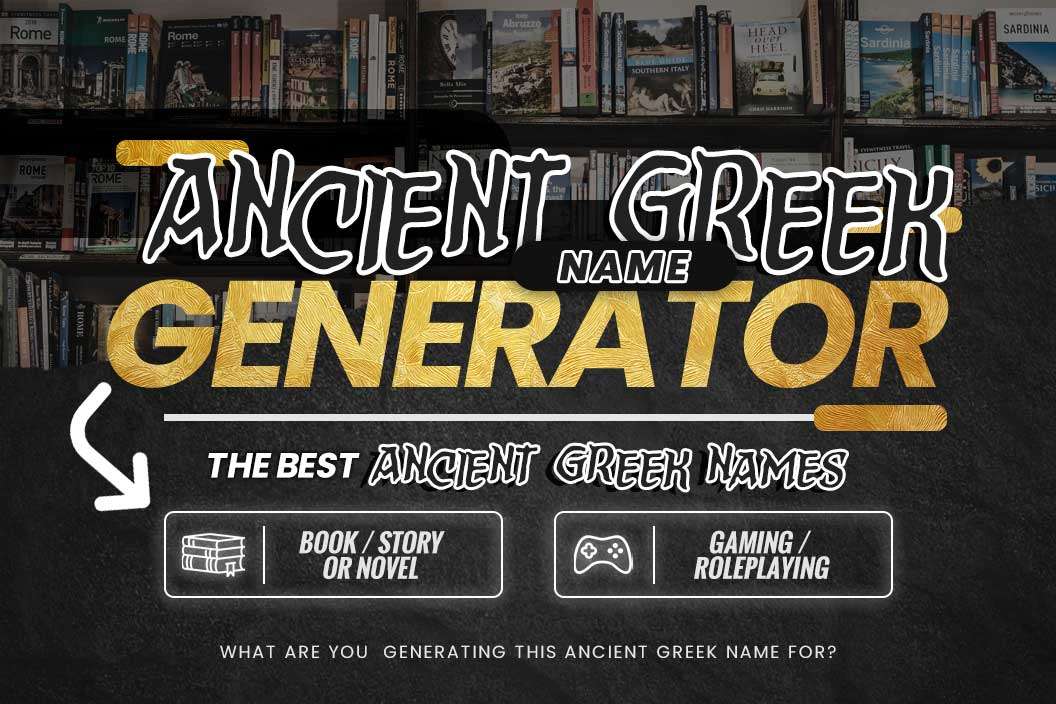 Coming up with proper character names is insanely challenging for creatives. Writers and script makers can spend hundreds of hours trying to think up names that capture the character and likeness of the subjects.

Encapsulating a subject’s character in any literary work of art is essential. It is why picking a name is such a vital part of the writing process. The wrong name might dilute the character’s personality or make them seem out of place.

While coming up with names is difficult, it shouldn’t be the case. How then can you come up with character names quickly?

Our Ancient Greek name generator will give you access to the perfect set of names for your project.

The tool is easy to use. It gives excellent suggestions to inspire your writing.

The History Of Ancient Greece

Ancient Greek was a civilization that existed between 12-9BC is a period commonly referred to as the Greek dark ages. The civilization was split into several autonomous cities, each having its traditions and culture.

Ancient Greece was not without conflict. The Lelantine war was the first of several Greek wars during the civilization’s existence.

The Chalcis and Eritreans fought the war over control of Euboea. Euboea was an agriculturally fertile territory, and both city-states sought to control it.

The second notable strife was the mercantile war. It is the most notable class war in ancient Greece.

With the advent of mercantilism, an emergent class of wealthy traders threatened the power of the aristocratic class. The strife was only exacerbated by the widening disparity between wealthy and poor cities.

Greece witnessed the most significant social revolution in the Messinian wars. Regardless of social standing, the male population of Sparta was conscripted into the Spartan army. The war saw the conquest and subsequent enslavement of Messenian citizens.

In 621 BC, the eponymous archon Draco introduced a set of overtly punitive laws during the agrarian crisis. Draco did it to mitigate a civil war; however, it did not succeed.

As a result of population pressure in the 7th century, BC emigration was necessary, as the Greeks sought to expand their territory. The Greek territory expanded rapidly, spreading out as far as Sicily.

In the 6th Century BC, the capital Athens was plagued by several tyrannic regimes. Cleomenes, the then ruler of Sparta, helped overthrow Hipparchos. Cleomenes intended to install an eponymous archon who would help subjugate Athens.

It led to a major civil war between Sparta and Athens. Athens would eventually become an autonomous democratic city.

Ancient Greece, much like all civilizations in history, would come to collapse. The civilization fell to Rome in the Battle of Corinth.

At its height, ancient Greece was economically prosperous. The civilization had a rich culture and extraordinary history. They had made great strides in science and literature.

The ancient Greeks were renowned for their rich culture. Literature was a cornerstone of ancient Greek society. The civilization was inspired through brilliant literary works, most of which are popular today.

Greek mythology was incredible. These tales have inspired many modern-day popular TV shows and series. The creativity of the ancient Greeks was evident not only in their sculptures but also in their tales.

Here are some popular takes from Ancient Greece:

The story begins when Mino’s son is killed in Athens, and Mino seeks revenge. Minos designed a labyrinth where he would send several young men from Athens every seven years. In the Labyrinth, they would get devoured by the Minotaur. The Minotaur was a mythical creature, half man and half bull.

Mino’s daughter gave Theseus Ariadne’s thread. It was an object that Theseus was to tie to the Labyrinth’s entrance to unlock it upon killing the Minotaur. Theseus succeeded in his mission and decided to elope with Mino’s daughter.

On their way to Athens, Theseus had a dream where he was advised by Dionysus (a Greek god) to leave Mino’s daughter at Naxos. She would become Dionysus’s wife.

The tale of Daedalus and Icarus takes place shortly before Theseus and Minotaur’s. Daedalus was the architect that constructed Mino’s Labyrinth.

To prevent the secrets of the labyrinth design from leaking, Mino imprisoned Daedalus and his son Icarus.

Daedalus came up with gluing bird feathers with wax to form two large pairs of wings. After the two had constructed the wings, they fled to Crete. Daedalus warned Icarus not to fly too close to the sun as they were flying.

Icarus failed to heed the warning. He flew too close, and consequently, the sun melted the wax that was holding his wings together. He plummeted his death in the sea.

Zeus ordered Hephaestus to create the first woman out of the soil. The woman was named Pandora.

Each god had given her unique traits. Zeus ordered Pandora to take a jar to Prometheus. Pandora was further warned not to open the jar.

Prometheus was weary of receiving any gifts from Zeus, with whom he had been in contention after giving man the gift of fire. Epimetheus accepted the jar and opened it. Upon doing so, The box released all evil on earth.

The Story Of Athens

There once was a beautiful city named Cecropia. The city was so beautiful that Poseidon and Athena desired to take over and become its leader.

To settle the matter, Zeus suggested that Athena and Poseidon offer Cecropia gifts and let the people decide whose gift is better. The winner would become the god of Cecropia and have the city named after them.

The citizens gathered on Acopolis hill to watch the presentation of the gifts. Poseidon was first. He struck the ground, and from it, springs of water emerged. He assured the people of Cecropia that their land would never run dry.

The people were not impressed since the water was as salty as the sea. Athena struck the ground, and a massive olive tree emerged.

The people loved the gift, ensuring an endless supply of food. Athena became the god over Cecropia and named the city Athens.

The Tale Of The Gorgon Medusa

Perseus was a half-god. He was the love child of Zeus and Danae, a mortal.

Perseus was a heroic figure who was respected throughout ancient Greece.

Perseus sought to kill the Gorgon Medusa. It was a challenging task, as Medusa’s head was covered with snakes. These snakes would instantly turn anyone who made eye contact into stone.

Perseus sought wisdom from Athena. She gave him a reflective shield to use to make eye contact with the Gorgon Medusa. Perseus proceeded to kill the Medusa by chopping its head off with a sword.

Cisseus is ideal for a character whose sole desire is to amass as much wealth as possible. He is relentless in his pursuit of financial prominence.

Aristandros is befitting for a character that displays incredible leadership skills.

Pelonus is ideal for a quick-witted character.

The name is ideal for a character who is morally conflicted.

Phineus is a character who shows a great deal of diplomacy when handling conflict.

He is a character that lives to serve others—a great humanitarian.

Diotrephes is a gifted character. He is very talented in anything he tries.

Ada is a sympathetic character. She is willing to lay down her happiness for others.

Phyllis is a materialistic character. She is happy only when she is around wealth.

Auge is an emotionally sensitive character. She is easily triggered.

Caenis is an intelligent woman. She exercises sound judgment in all situations.

She is a woman with an agreeable personality.

She is a character that lives for the drama and excitement. She loves being the center of attention.

Elcmene is a woman with a tragic backstory.

Character names play a critical role in literary works. They introduce the character and give us hints on their personalities. Coming up with ancient Greek names off the top of your head is not easy.

Many gifted writers have struggled to come up with proper names for characters. The Ancient Greek name generator makes everything much more straightforward. It gives you access to many names with just the push of a button.

The Ancient Greek name generator takes the focus away from making names and allows you to focus on your writing. It is a must-have for creatives.

Also need something to get your project moving? Check out our e-cover maker or our titles for stories.

Dr. Seuss’s books are known for their quirky characters, rhymes, and illustrations. However, the book covers are still END_OF_DOCUMENT_TOKEN_TO_BE_REPLACED

In a world bombarded with images and messages from all sides, it’s no wonder that book covers have END_OF_DOCUMENT_TOKEN_TO_BE_REPLACED

Funny novels are sometimes hard to write because humor differs from person to person. For a humorous book END_OF_DOCUMENT_TOKEN_TO_BE_REPLACED